The ANF had it's third 'meeting', and second battle with the Shako rules, on Sunday 10th October 2010. This time we did a re-fight of a battle based on Utitsa 1812 (the southern sector of Borodino). It was a tense, see-sawing encounter until the last couple of turns, but ended being a clear Russian victory. 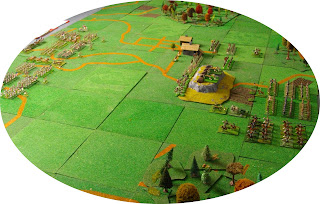 Poniatowski's (aka me) Polish corps was faced with the challenge of taking the heavily defended Utitsa mound and town (photo above). The plan was to avoid the mound and send a pinning attack against the town while attacking around the Russian left flank with an infantry and cavalry division (photo below). After six turns it looked as though the flanking attack would break through (second photo below), but the two Russian regular battalions in an otherwise mlitiia division were able to repulse the attacks of the Polish infantry (heavily disguised as French) that had been weakened by Russian artillery fire from the mound. 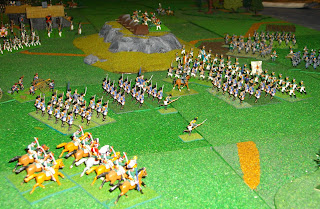 Meanwhile, on the Russian right, reinforcements on both sides had been thrown into the attack (French) and defence (Russian) of the area around Utitsa (photo below). Having had two divisions leave the field Poniatowski launched a final, desperate attack with the fresh Westphalian troops aimed at breaking the Russian grenadier division around Utitsa. This failed and the battle was over (last photo below). In the end it was a well-deserved Russian victory. 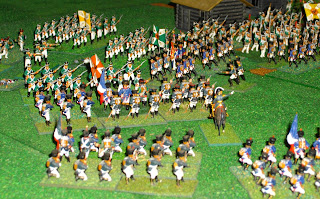 This scenario came from Chris Leach's Fields of Glory.
Posted by James Fisher at 00:35 1 comment:

On 12th September 2010, we played the first of our Napoleonic games, and first test of the Shako rules, with a re-fight of the Battle of Montmirail 1814. This is one of those dreams for every French commander, with heaps of guard, mainly Old Guard, and all of the favourites grenadiers à cheval, chasseurs à cheval, lanciers polonnais, grenadier/chasseur à pied and the great man himself on the battlefield (photo below). All this quality has it’s pressures though—imagine if you lost?! 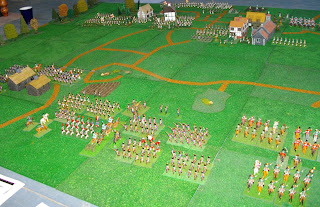 Seeing their best chance for victory as coming before the French had all of the guard on the board, the Russians attacked!
The infantry on the Russian right were ordered to defend the villages of Marchais (top left of photo above) and Les Genereux (top right of photo above), while the cavalry marched towards Fontenelle in an attempt to bring a flanking attack on the outnumbered cavalry of the Old Guard. For their part, the French launched a pinning attack by Friant’s old and middle guard on the troops around Les Genereux, a stronger attack by Ricard’s conscripts on Marchais and sent the guard cavalry against the Russians. Thus, the scene was set for a decisive cavalry action (photo below). 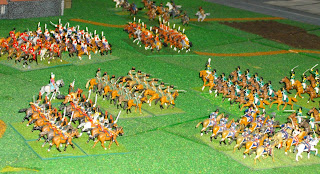 The Russian dragoons, and even the cossacks, charged in, making some head-way against the guard chasseurs and lancers, but “the big heels”, les dieu, the grenadier à cheval were not to be denied, breaking three Russian dragoon regiments in succession. The Prussian hussars from Pirch II’s troops joined the fray. Their superior numbers forced the grenadiers à cheval back, but they then reformed to join Defrance’s newly arrived gardes d’honneur in a counter attack.
On the Russian right, Ricard’s French conscripts made slow progress against the Russian regulars but, despite several battalions fleeing, they held in time to see the bearskins of Michel’s old guard marching across the field to join Friant’s men in a general attack (photo below). So, with their cavalry attack a near-run thing, but ultimately unsuccessful and their centre under pressure from the best infantry in Europe, the Russians ordered a general withdrawal.


This scenario came from Chris Leach's Fields of Glory. 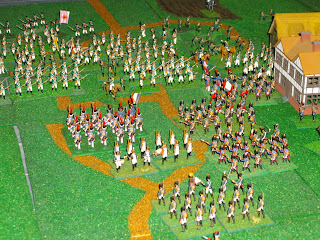 Posted by James Fisher at 23:34 No comments:


Age of Marlborough are quite 'traditional' rules with two-minute moves, order writing, combat lookup tables, individual casualties and the like, but they work well and produce a distinctly Marlburian flavour. This is achieved by the genius of the rules, the requirement to write orders three bounds ahead of time. Huh? That’s right orders for the first three bounds are written at the beginning of the game and then those for bound four at the end of bound one, and so on. Order writing is simple and clear, ‘march ahead’, ‘fire’, ‘stand’, ‘wheel left’, and is done using only a few words and/or arrows. There are no dice, so the outcome of firing and mêlée is known, even though the path to these actions is little known by the commanders, particularly novice ones!

On the occasion of our first battle we played a small engagement in which I commanded the Bavarians against the Prussians commanded by Mark. Julian, who provided the figures and knew the rules, was the umpire. The engagement was a simple one in which four Bavarian infantry battalions (one of guards) and one cavalry unit were attacking the Prussians (four infantry battalions, one of which was guards, and a battery) in a defensive position around a farm house.
The brilliance of the rules, and ineptitude of the novice commanders soon became apparent as one of the Bavarian battalions blundered towards the Prussian artillery battery, halted and then blundered in again, eventually being broken from the ensuing casualties. In the meanwhile, on their left, the Bavarians somehow managed to get two units, including the guards, to attack one unlucky Prussian battalion, which was forced to quit the field. On the right the remaining Bavarian infantry marched across rough ground and was flanked by the Prussian guards. An attempted flanking manoeuvre by the Bavarian horse was partially successful as they caught the remaining Prussian battalion in the flank.
The battle concluded with the victorious Bavarian infantry on the left reforming to contemplate an attack on the farm house (first photograph), while those on the right were being smashed by the Prussian guards (second photo). The Bavarian cavalry was about to be whittled down by the Prussian infantry and artillery. The battle was called as a minor Prussian victory. 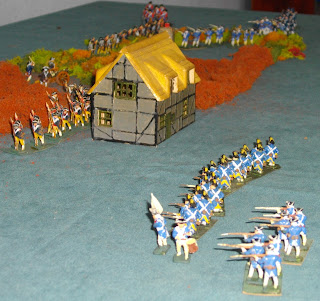 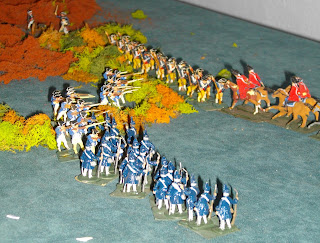 At the conclusion of this battle, Mark and I were as hooked as Julian. We plan to do another battle with the rules, likely for the Great Northern War period (another favourite of the three of us), sometime in the future. For now though, we are focussing on our ‘first love’; Napoleonics.
Posted by James Fisher at 23:24 1 comment: