It is on again! Karwansaray publishers are running the seventh edition of their Great Wargaming Survey, under the banner of Wargames, Soldiers & Strategy magazine. 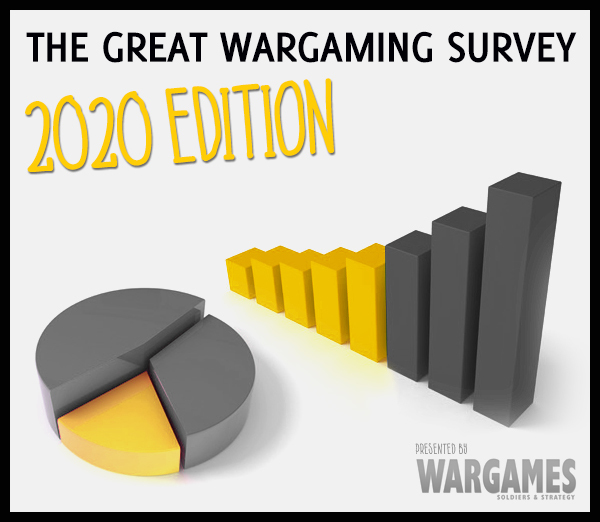 Many, perhaps most, readers of this blog may well have completed the questionnaire in previous years—I found out about it in 2017, so have been a data point in the past three.
There are questions about how much you spend on wargaming-related purchases, preferred eras, scale of miniatures, size of games, aspects of the hobby that you most enjoy, how often you wargame, sources of inspiration, plus a bit of demographic info. so that responses can be categorised by the country in which you live, your age and gender. All responses are anonymous.
This year features a heap of 'thank yous' for people who complete the questionnaire. Everyone receives a 20% discount coupon with Karwansaray plus free access to a pdf of an article from each of nine issues of Wargames, Soldiers & Strategy ("Aspern-Essling in 6mm", "Brécourt Manor 1944", "My kingdom for a horse", "Storage Wars", "Fair Play", "Ptolemies vs Seleucids", "Fury!", "Getting back in the saddle", "Putting theory into practice").
There is also the chance to win one of a number of prizes "thanks to our gracious sponsors":
One set of Baccus rules
One box set and one starter set from Battlefront Miniatures
One plastic box set from Gripping Beast
Two sets of Osprey Wargames rules
Two books from Pen & Sword
A 10mm starter army from Pendraken Miniatures
Two GBP30 vouchers from Sarissa Precision
One full bundle of Infamy, Infamy, or Chain of Command, or Sharp Practice 2 from TooFatLardies
Two plastic box sets from Wargames Atlantic
One plastic box set and one starter set from Warlord Games
Three one-year subscriptions to a Karwansaray Publishers magazine
This year's questionnaire includes a series of questions that are linked to further study by psychologist Dr Robert Körner and colleagues who recently had a paper entitled 'Who commands the little soldiers?' published in the Journal of Individual Differences. Sadly, this paper is not freely available, but here is the abstract:
The popularity of miniature wargames (MWGs) has recently been on the rise. We aimed to identify the personality characteristics of people who play MWGs. Whereas the popular media have suspected that fantasy role-playing and war-related games cause antisocial behavior, past research on tabletop role-playing has shown that gamers are creative and empathetic individuals. Previous studies have investigated pen-and-paper tabletop games, which require imagination and cooperation between players. Tabletop MWGs are somewhat different because players compete against each other, and there is a strong focus on war-related actions. Thus, people have voiced the suspicion that players of this type of game may be rather aggressive. In the present study, 250 male MWG players completed questionnaires on the Big Five, authoritarianism, risk-orientation, and motives as well as an intelligence test. The same measures were administered to non- gamers, tabletop role-playing gamers, and first-person shooter gamers. Results indicated that according to self-reports, MWG players are more open, more extraverted, and have a higher need for affiliation than non-gamers. Further, high scores on reasoning and low scores on authoritarianism were typical of MWG players, and MWG players were similar to other gamers on these characteristics. All in all, our findings show that despite their penchant for (re)-enacting war scenes, MWG players seem to be open, nonauthoritarian individuals. Future research may add to these findings by using observer reports and longitudinal research to better understand whether intelligent and nontraditional people are attracted to MWGs or whether the setting of MWGs supports the development of such traits.
The following note is included on the page of the Great Wargaming Survey featuring these questions:
"Any responses will be supplied to him strictly anonymized. If you are uncomfortable answering any of these questions, please skip to the next page."
It was fun to answer these questions and to know that the data will be part of a specific study, though a shame that the original paper was not 'open access'. Perhaps Karwansaray could feature a layman's version that will be available to all?
[Having now read the paper, the responses from the Great Wargaming Survey should add greatly to this study. The original featured respondents from Germany and those classified in the 'miniature wargames group' nominated Warhammer 40,000 (31.2%), Freebooters Fate (16.8%), Star Wars X-Wing (6.8%), Bolt Action (6.0%), Warmachine & Hordes (4.8%), and Infinity (4.0%) as games of choice. It will be interesting to see a comparison of these results with responses from other countries and players of historical wargames.]
The 2020 edition of the Great Wargaming Survey is open until the end of August.
Results from previous years of the Great Wargaming Survey are available publicly on Karwansaray's website.
Posted by James Fisher at 10:31