Honorary member of the ANF 'family', Mark, Son of York, who is currently referred to as Marc since he is commanding the French left at La Rothière, brought to my attention this new, marvellous website. 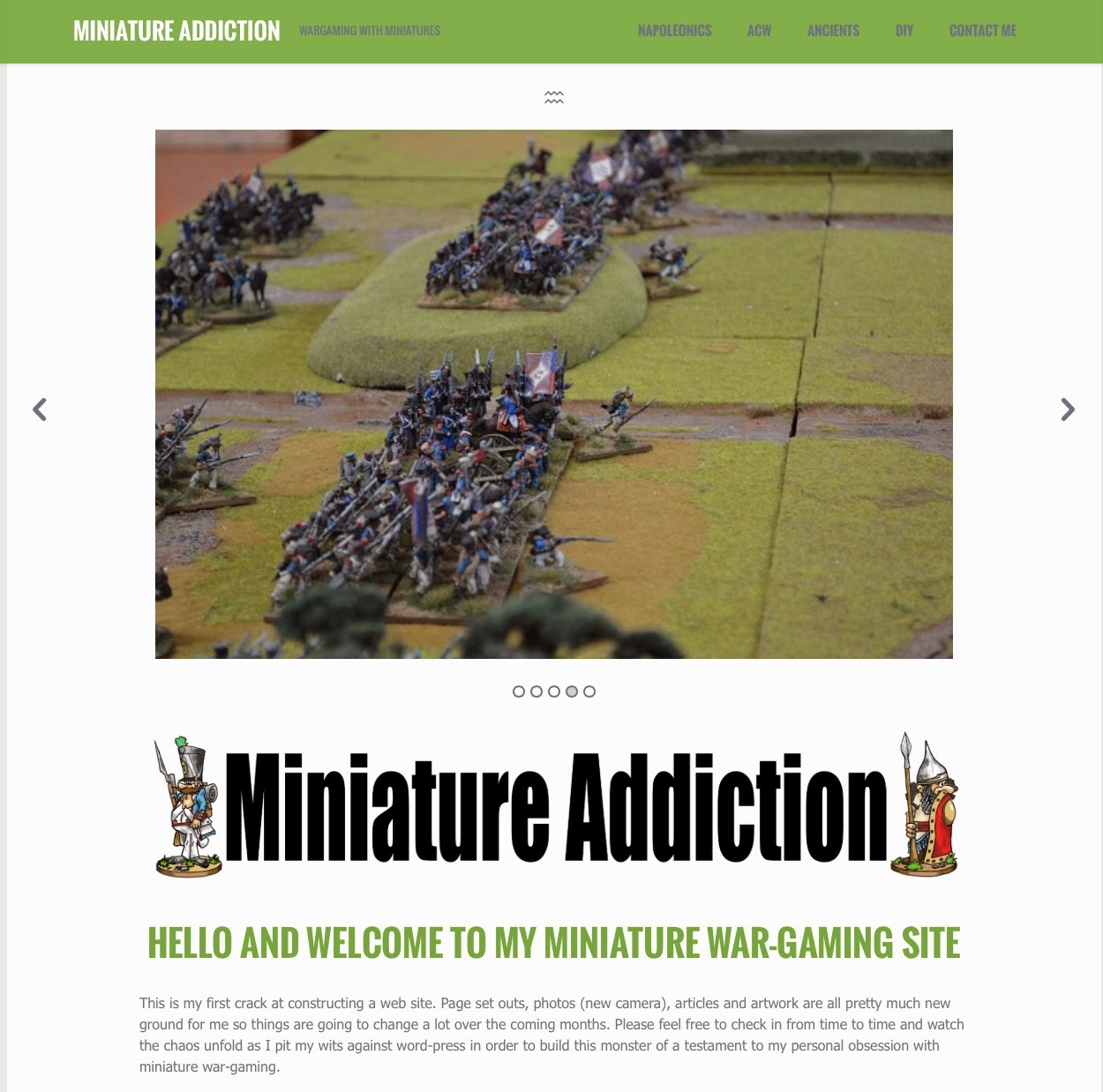 In case you have not seen the link on Mark's blog, DYSAF and check out the Napoleonics section with its subsections devoted to: 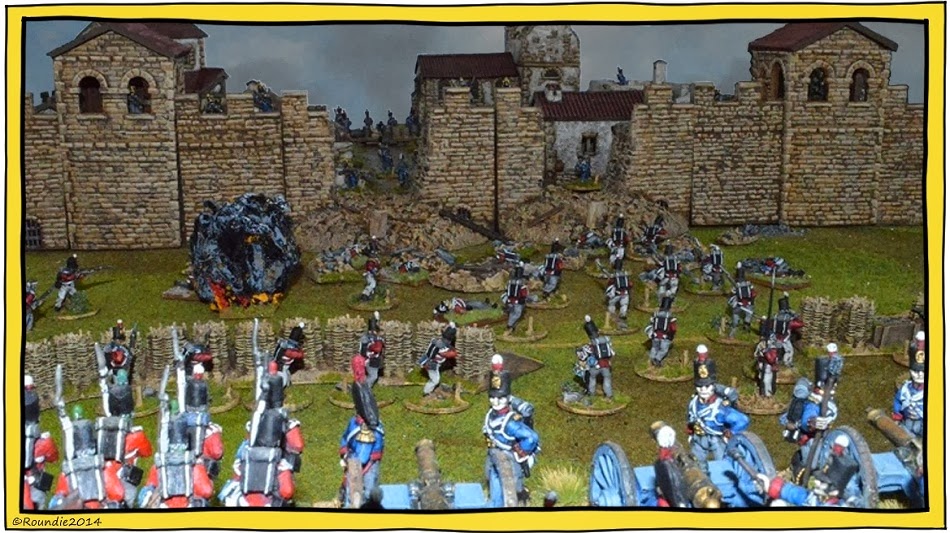 and grand battles in 6 mm. 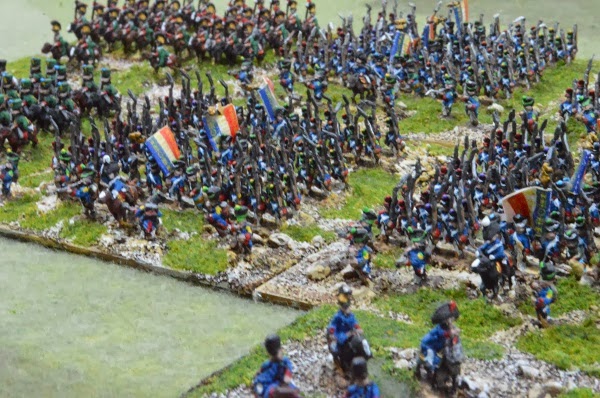 The latter is particularly impressive to me and up there with 'Pushing Tin's' use of that scale to great effect.

Being a website the author, 'Roundie' has more scope for layout and formatting than we bloggers and he has used this to fine effect. He seems to have that eye for colour and layout that people like graphic designers have, and people like me do not!

Unfortunately being a website limits his interaction with the wargaming blog 'e-community'. If you are reading this Roundie, what say you put together a linked blog? Rafa Pardo has a great example of this linking his blog to his marvellous website.

Posted by James Fisher at 11:28 No comments:

Our first bicentennial game for 2014 will be based on the Battle of La Rothière, "the battle in the blizzard", 1st February 1814. 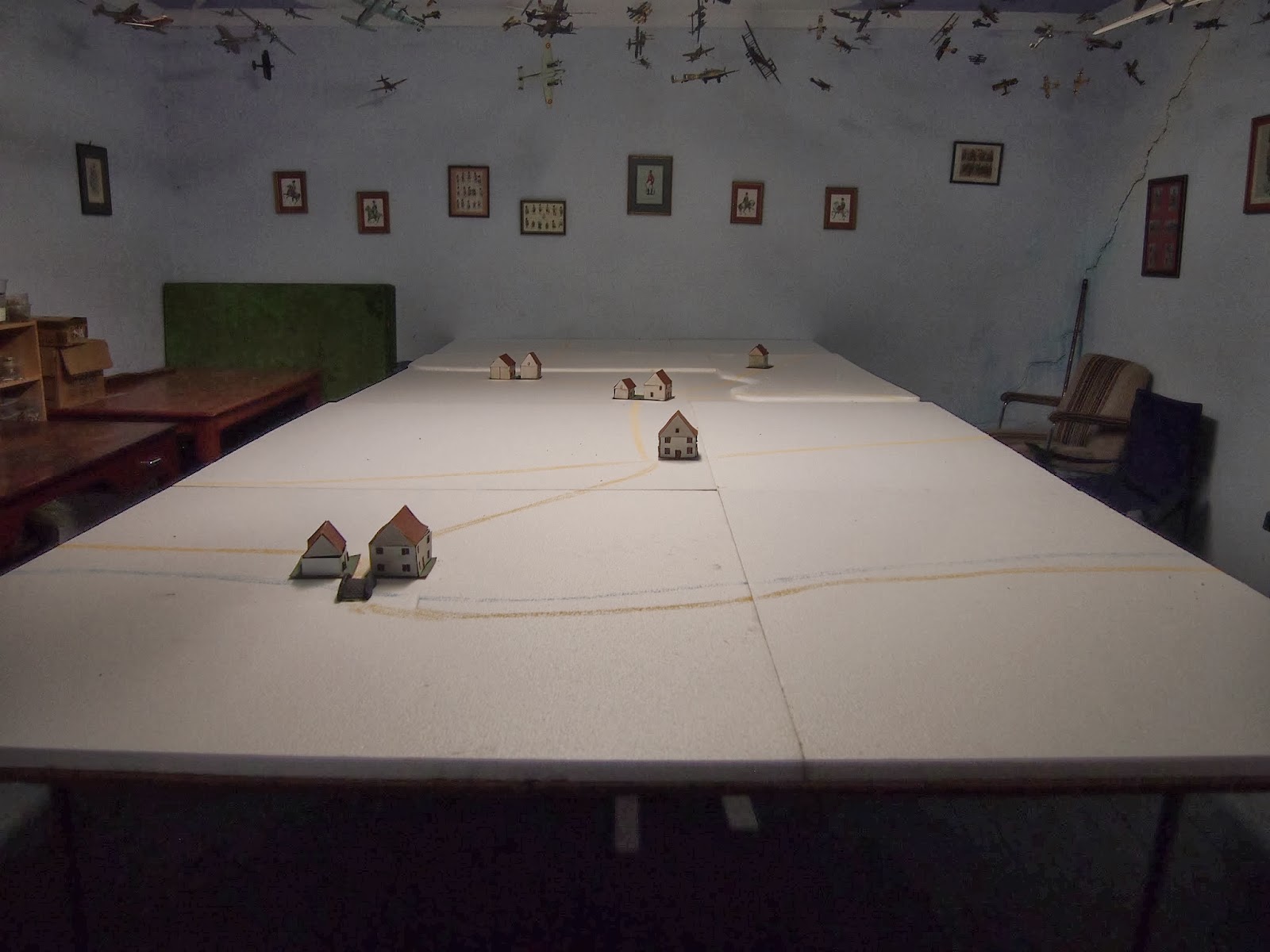 The table is nearly all set save for some river sections to represent the Aube, some trees in the woods at the eastern end, some snow-covered roves and the figures, of course!

I did up the orders of battle using a scale of around 1:33, so we'll have a few figures on the table; nearly 2 000 allied infantry, over 400 cavalry, 28 gun models, with roughly half that number for the French. 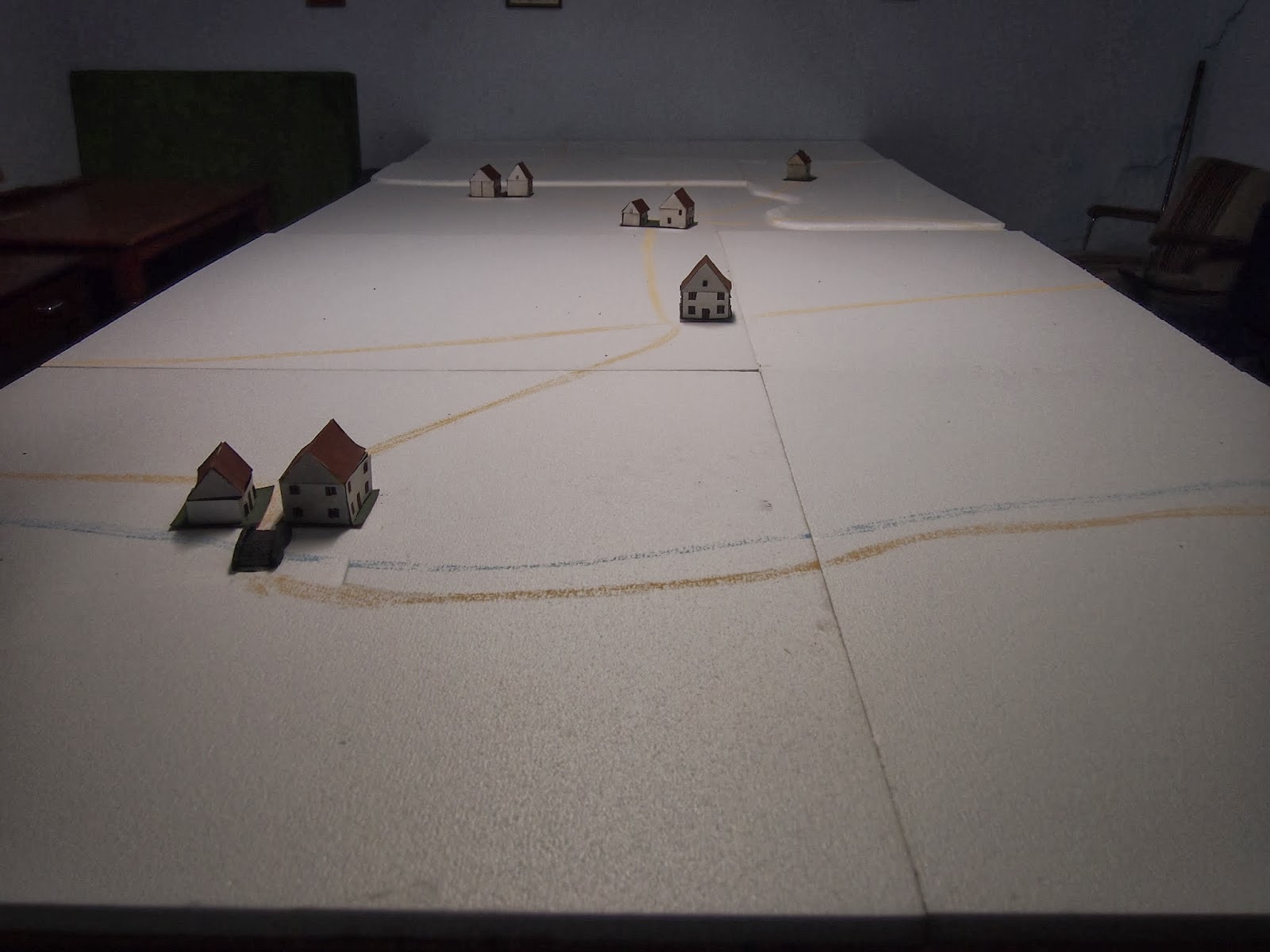 View of the table from the western end. Dienville on the River Aube in the foreground, with La Rothière in the centre.

Hopefully we can make it look as good as our Eylau game (he says immodestly!).
Posted by James Fisher at 01:15 13 comments:

[My wargaming time has been tied up with playing and planning games (and some painting) lately, so little time to write about what we have been up to. Here's my first go at rectifying that with one of the several reports of our recent efforts. Beyond this there are all those lovely posts on the blogs of others that I want to look at 'properly'. Still, I could have real problems, not FWPs, hey?!!]

This game, played on 29th December, was done as part of the Campaign of Nations. Gamemeister David, aka MurdocK, put out the call for players who could do one or more games in a “‘best of three skirmish series”. This is a nifty mechanism that he has used previously in the campaign to generate some interesting and quick games, the results of which impact on the map. Simply, the side winning the “world series skirmishing” (ha, ha) gains the upper hand in the skirmishing/scouting on the map.
It seemed a great opportunity for us to play a game at a completely different scale and to try a set of rules that I’d been wanting to have a go at for a while, Capitán (Napoleonic wargames rules for company & squadron level actions). 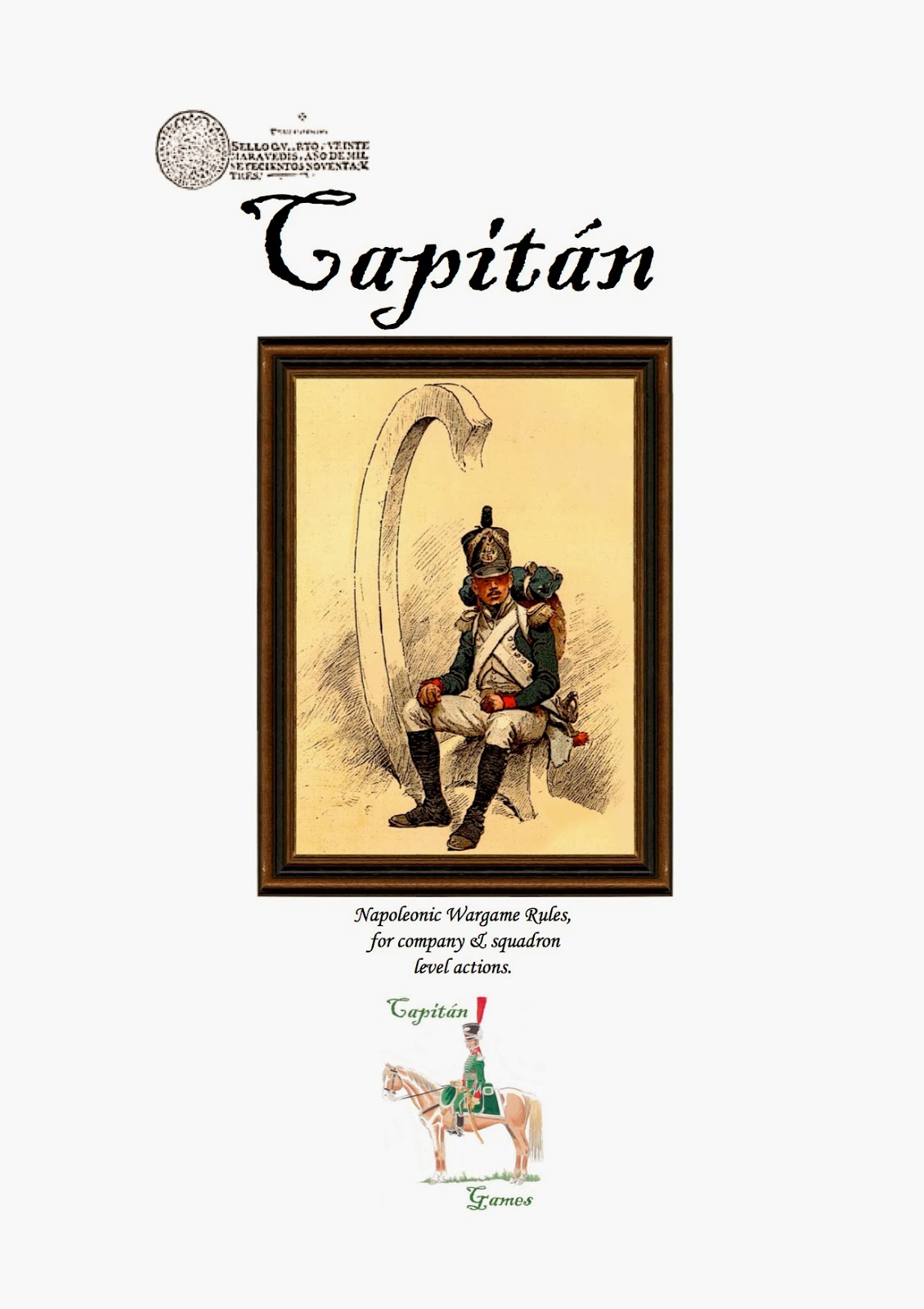 At that stage I had the first edition of the rules that was made available through their website. As such they are the ‘shell’ of the rules and contain numerous inconsistencies and errors that require ironing out, but they seemed a good place to start for skirmish wargames in this period. More on the rules as we go along.

I nominated us to do one of the combats between Russian hussars and French chasseurs à cheval. David advised us to represent up to 120 horsemen on each side. The board was to be “mostly flat scrub terrain, maybe a farm house or a stream (no major rivers in the area)”.

Given these guidelines, being in the ANF Annexe 1 (aka Mark’s place) where we have less terrain than at ANF HQ and using a new set of rules, we went for the simplest of terrain—as you can see! 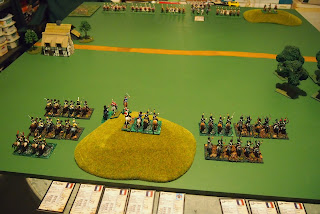 Initial set-up, the Russians, commander in the centre, indicated by card, with (~) a company of hussars on either side. 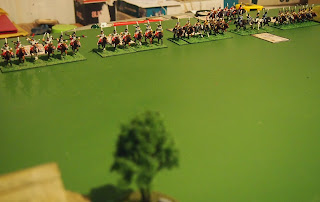 French commander on the hill with a (~) company of chasseurs on either side. They had more troops, but some were poorer quality. 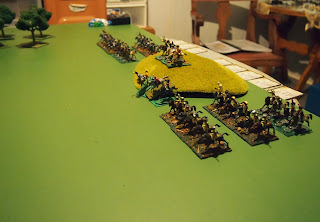 In the Capitán rules1 each figure represents around three men and they are arranged in units of four to six (representing about a company or peloton). A unit is able to fight until it is reduced to two figures at which time it must pass a morale test to continue (and may be combined with another unit if it passes).

The ‘engine’ of the game is the unit data card (UDC). This contains all of the information about the unit: nation, unit, type, class, armament; initiative (I), morale (M), courage (C); movement rates; firing ranges for extreme, effective, short; command range and span (if a commander like this one); special qualities available and the cost in parentheses; no. of figures, no of units allowed, points cost. 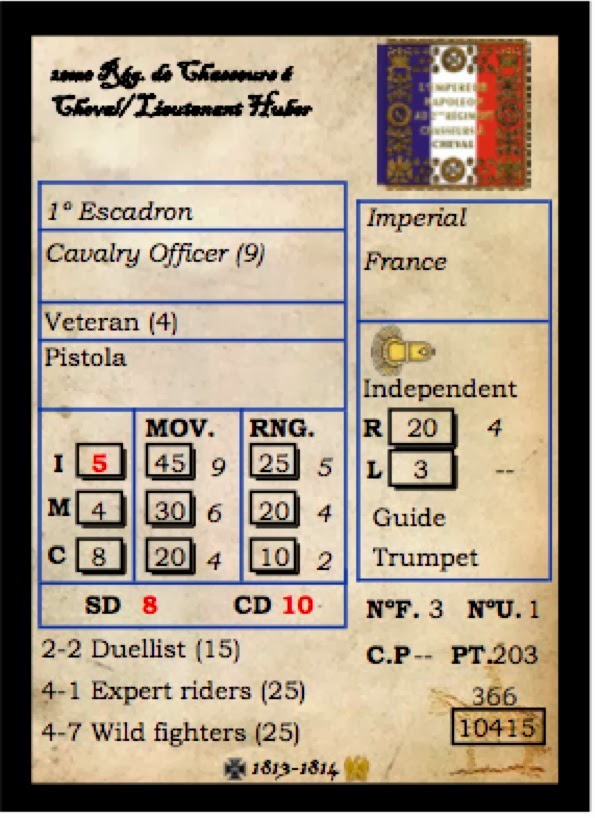 We were each allocated 2 000 points from which to select our mix of command and line units plus any special qualities, with the limitation of only one command unit and one staff unit.

The two sides approached one another, the Russians in a line the French with each flank reinforced. Note the UDC behind each Russian unit. The cards for the French units are just off-table to the right of the photo. 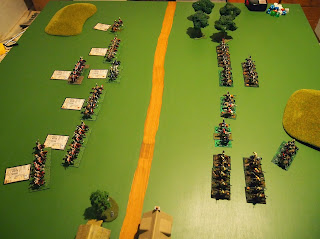 Charge! The first units go in. The game works on a system of initiative with all actions for the unit that wins the initiative (based on a D6 plus initiative rating) completed before another pair of units test for initiative. It is possible to move more than one unit under the initiative of a commander. 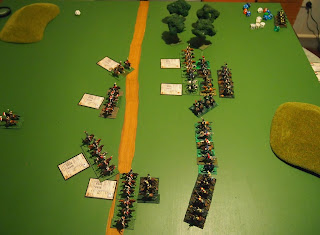 A mêlée is deemed to be a “scrum with all figures of all units taking part”, so the figures are lined up, with additional figures ‘piling in’ and getting free ‘hits’. 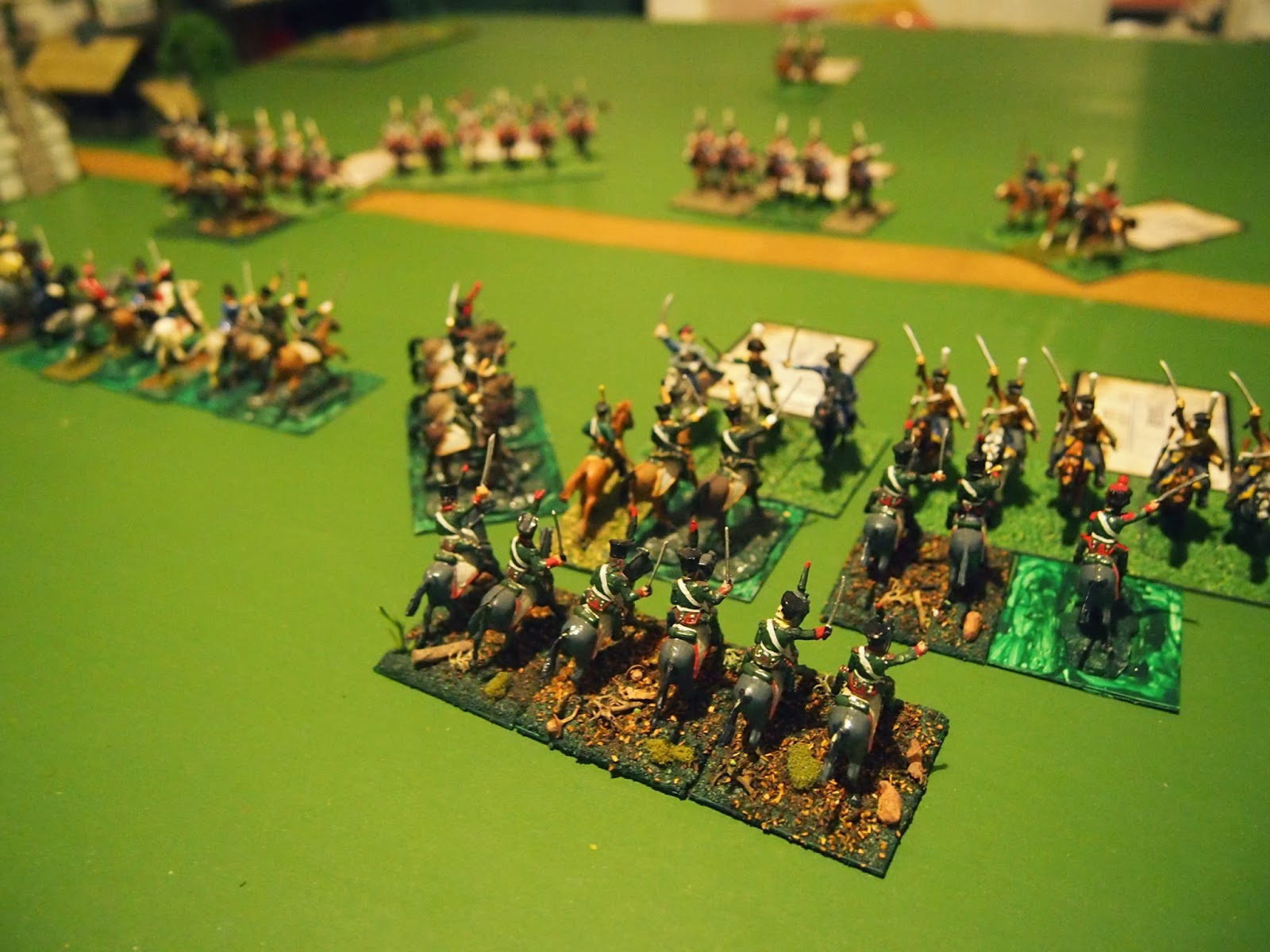 In a mêlée the pairs of figures pair-off and roll against one another using a D8, D10 or D12, depending on the quality of the unit, which is modified for situation and special qualities. The highest modified score is a hit on his opponent, a draw is a hit on each. Additional figures cause free hits on the opposing side. 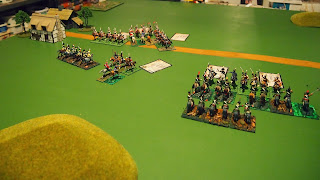 An evasion roll is made for each hit, using the best die available to the unit (a D8, D10 or D12 from its mêlée and firing dice), with a five or better being a successful evasion.

With a bit of successful ‘ganging up’, the French had the better of the early mêlées… 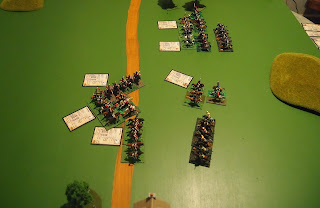 but then the commander let the blood run to his head, with disastrous results! 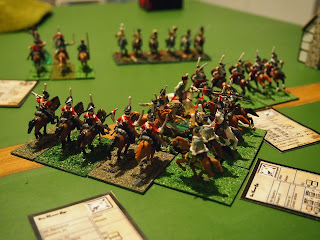 Back on the French right, the initially successful 2e company is in trouble. 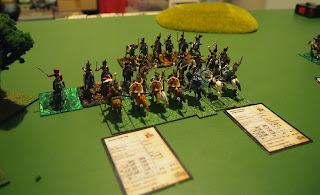 In fact the Russians were gaining the upper hand everywhere… 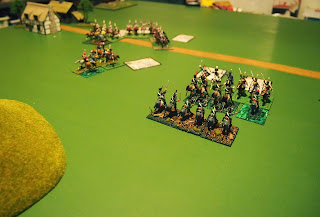 and now had superior numbers in every mêlée. 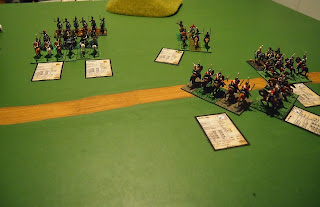 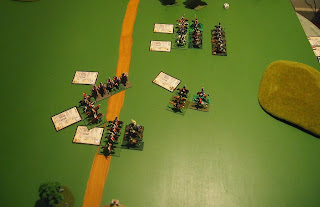 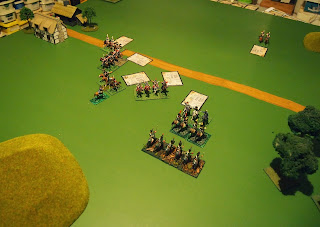 With Capitàn a mêlée continues until one or the other side is eliminated, fails a morale test (when a small unit—2 figs or fewer), or successfully breaks off from the mêlée. This latter option seemed quite difficult and meant a -2 in the mêlée, so we did not use it, hence the fights to the ‘death’.

Thus it was one to the Russians in the best of three 'world series'! 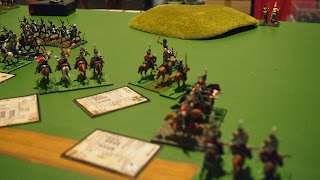 From this first outing, Capitàn seem to be a pretty good set of rules for a fun skirmish game. It was definitely more of a pure ‘game’ than we are used to. A nice change to use such small numbers of troops, but more akin to a cowboy shoot out than anything particularly Napoleonic. Nevertheless, I thought enough of them to order the second edition. These arrived in early January and we discovered a few things that we had done wrong (like the morale test) and aspects that had been clarified, like how figures face off in a mêlée and breaking off from a mêlée.

So, I have another tale to relate of a cavalry action with ~100 figures per side, but that is for another time…

1 This has changed slightly in the second edition so that units are from 4 to 12 figures.
Posted by James Fisher at 13:47 7 comments: