Battle of Craonne, 7 March 1814: can one ever improve upon the Emperor's plans?

The scenario we picked was straight 'out of the box' - thanks to Chris Leach for producing a very easy to set up and finely balanced scenario out of the wider historical battle, optimised for Shako. Here it is: 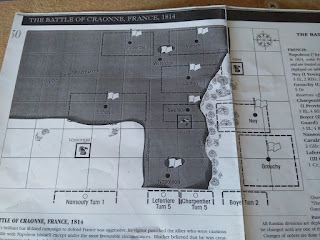 And the order of battle here, heavy on Imperial Guard as historically: 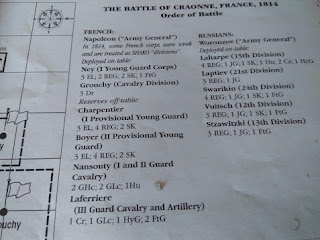 As numerous historical sources attest, the historical encounter was both 'one of the most desperately contested battles in which Napoleon ever took part' (Maycock) and also one where it very tempting to believe that with a change of plan - something more ambitious, perhaps - it might be possible to outfox the Russians and win a more comprehensive victory than was achieved on the day.

Such was my intention, anyway, as the surrogate Napoleon on the day. It was, however, an undoubtedly strong defensive position - below, viewed from the East. This was a battle where reputations could be very easy to bury. 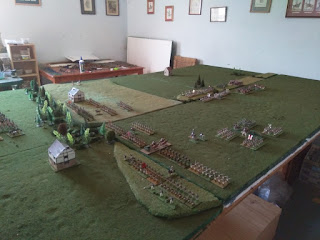 Historically, Ney attacked directly up the slope in the trees visible in the left background of the picture, with Grouchy in support. My plan was for Marshal Ney and General Grouchy to march north, to beyond the wooded area in Leach's map, and only then swing West to attack Gen. Vuitsch, in the left foreground of the picture. If he could be dislodged, I reckoned, then Gen. Laptiev would look dangerously exposed, whilst Gen. Boyer could be relied upon to dislodge Gen. Swarikin from Heurtebise, especially with the eventual support of Gen. Charpentier's troops after Move 5. It was nothing if not simple. But there were evidently huge risks. Who would want cavalry alone challenging a ridge, for example, as Gen. Nansouty would be asked to? 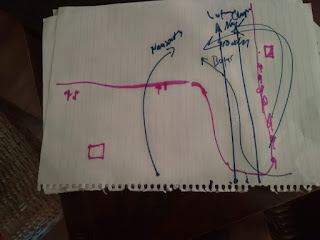 And my real concern was that Gen. Vorontzov would order an immediate attack and cut Ney off - a risk that I seemed to have averted, as the movement began. 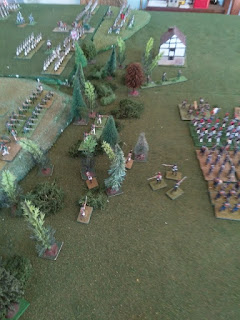 And so the plan was on its way, or rather, Ney and Grouchy were on their way, the latter commanding my favourite French troops, the dragoons. . 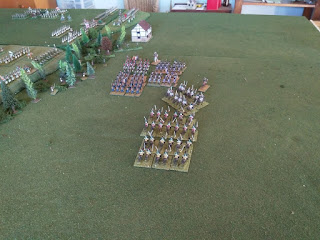 At the end of the second move, they had got this far, and seemed out of danger from a flank attack - even the Russian artillery firing had been sporadic and relatively ineffective, whilst the skirmisher exchange had been even-handed: 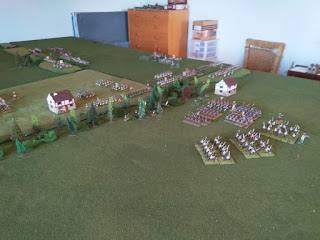 Apparently there had been orders to the Russian reserve under Gen. Stzawitzski, although what they were, I never found out - I was told they were later contradicted. 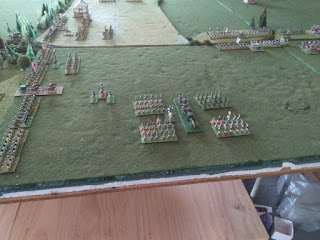 Events were about to supersede them in any event. Gen. Boyer, acceding to the command as historically, was about to press his attack on Heurtebise. How long to cross the woods, I wondered, how long? 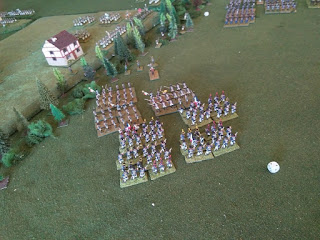 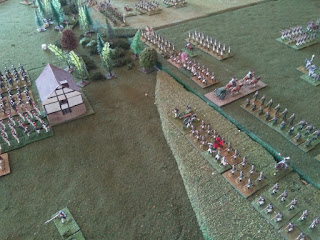 But I can assure you, those Russian lines looked steady and formidable, and with additional defence benefits, this was to be a mighty difficult obstacle. Maybe that gun might be the weak point? It won't get the defence bonus. 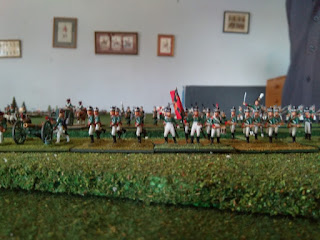 I must not omit events on the French left, though. Gen. Nansouty's cavalry were engaged in the wide outflanking manoeuvre they'd been ordered to execute, with the objective of disruption rather than actual achievement. The Guard cavalry had not performed especially well, the Russian 2nd Hussar Regiment distinguishing itself with courage and verve. Here the position at the end of Move Four. 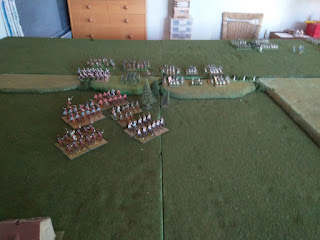 Events then moved apace. Marshal Ney's attack began, and it must be admitted that from now on, the die rolls were with me. In the picture below Marshall Grouchy is in the foreground, rounding the corner and preparing to assist in the attack. How many divisions would they put to flight between them? 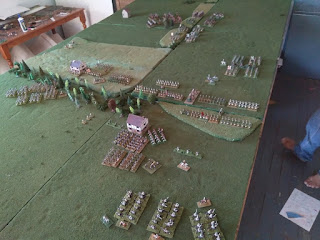 There was the undisputed bravery of the 1st Young Guard Regiment, about to engage in the decisive moment of the day, the storming of the heights by taking the Russian gun and establishing a foothold on the scarp. Gen. Meunier's finest moment: as he said privately of the Regiment, «Ils ont gagné la bataille par eux-mêmes». 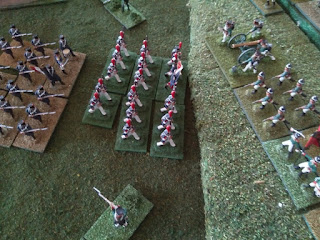 Combined arms was the objective, however: 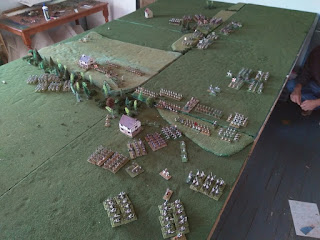 And combined arms the achievement, as the French gun finally got into action and 5th Dragoons and 1st Young Guard, having gained the heights by overwhelming the gun, between them crashed into hapless Russian battalions. 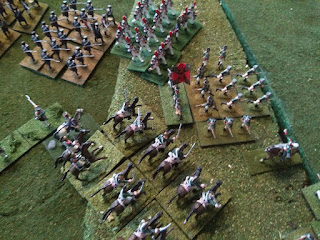 Gen. Grouchy's dragoons, which had rolled 6 after 6 for initiative and ended up swamped in staff officers, continued to sweep round the flank: 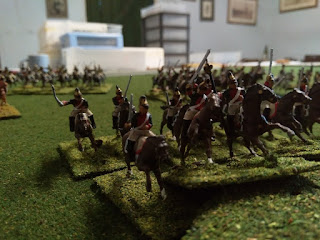 And now indeed the overall position was beginning to look perilous for the Russians, with Vuitsch's division being pushed back and Gen. Swarikin under attack from both Gen. Charpentier and Gen. Boyer, by Turn Six. The mass French artillery, however, though they looked mighty impressive, achieved absolutely nothing during the entire game. Dice can be so cruel. 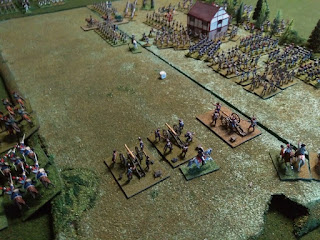 As late afternoon beams of sunlight crossed the battlefield, the plight of Gen. Voronzov became clear. Here, the overall position on Move Seven. 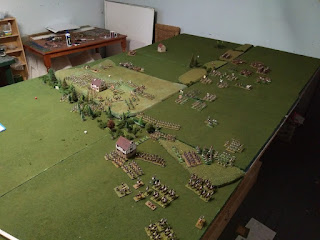 And here, the desperate defence of Gen. Laptiev, who succeeded in extricating himself, to the general relief of the Allies. 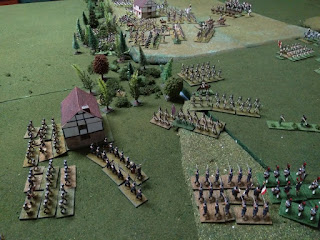 But with two Russian divisions broken by Move Nine, we decided to call the battle for the French - a victory, but not a glorious victory, which would only have been possible if three Russian divisions had been broken in the same turn. If not, the action would have continued until the end of the day, traditionally twelve turns in Shako, and every Russian division left on the table would have been broken. The numerical advantage of the French, the way that the Russians had been forced into square, was clear: 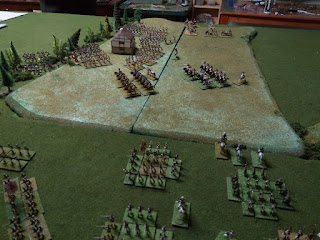 And equally, the risk to the Russians of being completely surrounded as the gamed ended: 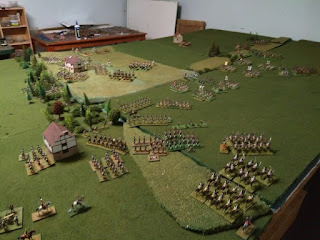 It was time to take stock. For all my boldness, it had become clear that the Emperor had sized up the situation correctly. There was little to gain for all Marshal Ney's and Gen Grouchy's marching, nothing that could not have been achieved equally well by a straight attack on Gen. Swarikin from Move One, which would probably dislodge him and enable pressure to be placed on Gen. Laptiev earlier. I was left with two consolations: first, that I had at least equalled the Emperor's achievement; and second, that I still believe I achieved it with less risk of defeat. A hugely enjoyable day's wargaming, and yet further evidence, should it be needed, of how well Shako can work in delivering outcomes close to their historical equivalents, details of which in this case may be found here:
http://napoleonistyka.atspace.com/Battle_of_Craonne.htm

To mark the anniversary of le mort de Napoleon, Pen & Sword Books are offering e-book versions of four of their titles as a free download from Amazon.


See post on The Chauvinistic Blog for more details. 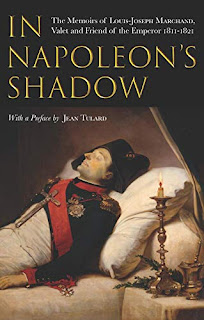 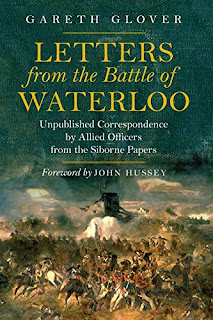 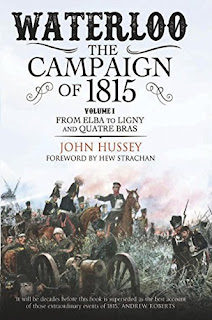 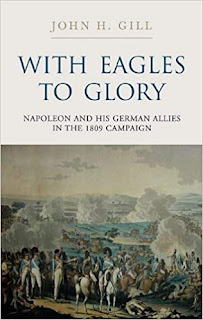