Plug for a new blog

The Chauvinistic Blog is a new blog that I have started that is dedicated to all things Napoleonic. 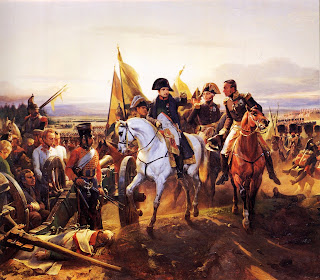 Napoleon at the Battle of Friedland, Horace Vernet, Wikimedia Commons

Our fabulous little group of wargamers began in 2010 and launched into a programme of games based on the battles of the later Napoleonic years, in line with the bicentennial. Napoleonic remains a large focus for us as a group but, since 2015, games of 'periods other than Napoleonics' have been played with an increasing frequency.

Since the Napoleonic era is my main reason for wargaming, I wanted to indulge my passion and have an adjunct blog that his dedicated solely to things Napoleonic, in the broadest sense of the hobby.

Reports of Napoleonic games will appear either on this blog or that, with links between them, but other 'things Napoleonic', be they book reviews, interesting articles, points of discussion, links to items on other blogs or websites will appear on The Chauvinistic Blog.

So if, like me, you can't get enough Napoleonic, pay the blog a visit!
Posted by James Fisher at 22:48 2 comments:

As trailed by James, today Mark and I ventured for the first time into ACW wargaming with a rules-test of the well-known Fire and Fury (1st Edition). I selected the Battle of Dranesville for the test. An early-war encounter with, I reckoned, pretty much the right balance of troops - four Rebel regiments, five Union, plus a few cavalry and batteries, and a sufficiently testing scenario for us. And a Union victory, which gave me something to emulate as Brigadier-General Ord, and something to avoid, as Mark's Jeb Stuart.

My first step, aside from the obligatory Wiki reference and some other online histories, e.g. http://www.civilwarhome.com/dranesvilleintro.htm, was to look at the various available maps. This was one drawn at the time, I believe judging from the script by a Rebel, which shows which regiments were involved and where they were placed by the respective commanders: 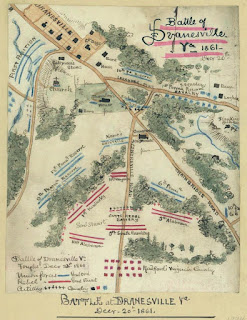 Whilst here is the sober official version General Ord submitted after the original battle: 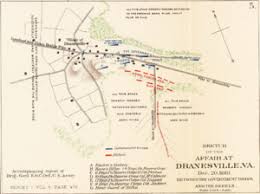 You will have to make your own judgement as to whether I reached a sufficiently close approximation of the outset of the battle in my own recreation of it - and indeed on whose sketch came closer to reality. The view below is from above Dranesville, looking ESE along the line of the battle, with the Union line about to enter the wood and the Rebels ensconced within it, their artillery ready to fall on Kane's 1st Pennsylvanians. A regiment, but an early war regiment and hence like all the other regiments treated in this action as a small five stand brigade. How would the rules stack up? Historically casualties were slight, some 194 on the Rebel side and 68 Union. Would Fire and Fury live up to its name, rather than verisimilitude, and deliver a bloodbath? 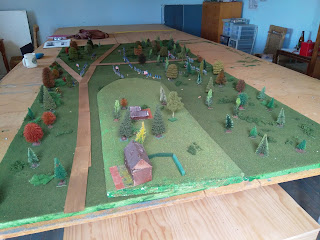 The Rebels came up all veteran, which was very nice for them. 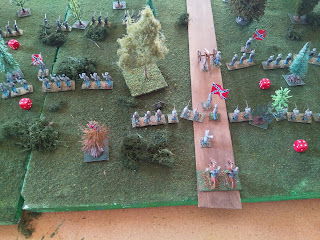 The Union fared a little worse, the 9th and 12th Pennsylvania - the two regiments in the right vanguard in the picture below - both turning out green. Not a good omen. Note Brigadier-General Ord with the reserve, the 10th Pennsylvania. His position there meant that his leftmost regiment, the 6th Pennsylvania, was out of command. He had better remedy that swiftly! If you look carefully you might also be able to pick out Jeb Stuart in the distance along the Centreville Road. He's also too far away for anyone to take a shot at him. 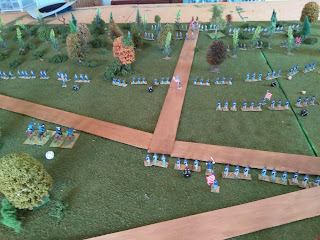 The Union phase of the first move saw their troops close up and make a tentative advance on their right flank, encountering the 1st Kentucky and exchanging desultory fire. Inside a wood is not the  best place to be to score casualties, as both sides discovered. The second move brought the two sides still closer... 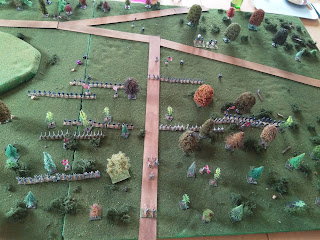 ...but it was the third move, where the 12th Pennsylvania had replaced the 9th in the line after they had become low on ammunition in a useful disordering of their Kentucky opponents, where the two sides became embroiled in successive melees. Although the Rebels duly got their obligatory +1 on the charge, the melee first became a desperate struggle, with both sides losing a stand (representing 150 men) on the second attempt to settle matters things went hopelessly wrong for the rebels as a result of the dice. Historically, these men did not get into such close quarters, but the result ended the same: one unit of the Kentucky skedaddled, and the Rebels retired on their left flank. 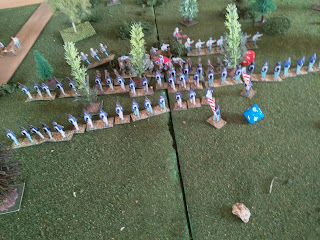 The Union battery finally got going towards the hill on move 4, in which the 12th Pennsylvanians  replaced the 9th in the line. Elsewhere, fire even in the open proved relatively ineffectual, much to the relief of Kane's men, who had been exposed to Rebel artillery fire for the best part of two hours until they could get out of the direct line of sight along Centreville Road, but who were still more accurate in their fire than the 11th Virginia opposing them in plain sight out of the woods. 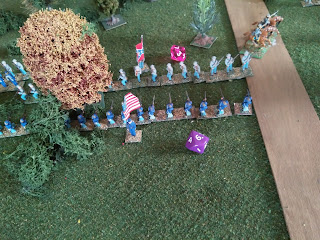 Note the small force of Rebel cavalry under Major Gordon, which had advanced to threaten the 12th Pennsylvanians. The Union cavalry was moved up to deter it the following move and their artillery also recommenced a move to the hill, though they never actually got there after being left stationary for one move.

By now, however, the fight had really gone out of the Rebels. They had lost two stands, one of the 1st Kentucky in the melee on the right and one of 10th Alabama due to a fire-fight in Move 5, which had also seen the 11th Virginia and the 6th South Carolina disordered, whilst two stands had skedaddled, one from 1st Kentucky on their left and one from the 10th Alabama on the left whose melee had also gone disastrously awry. By contrast the Union had lost just one stand, in the melee on their right flank.  No wonder that Jeb Stuart called it a day and abandoned the field to the Union. It was a really bad day at the office for him exactly as historically, As Brigadier-General Ord, I was grateful he did quit the field, because I still could not be certain how many more Rebels there were in the woods, so I had given the order to halt.

Mark and I felt that Fire and Fury (1st edition) had passed our test with flying colours. So far as verisimilitude was concerned, the losses (at 150 men per stand, and assuming actual casualties of around 1/3), came extremely close to the historical results. Not only that, but six game turns had been fought in around four hours even though we were almost entirely new to the rules, which bodes extremely well for fighting much more significant actions with them later on. We therefore resolved to fight again later in the year once the armies on both sides were larger. We also resolved to look at whether the 2nd edition of the rules brings any improvements, or just complexity for its own sake. I had always wanted to fight ACW, and now I have. Why did I wait so long?