(Images courtesy of the publishers. Please do not reproduce without first seeking permission)


Authors often pose the rhetorical question “why another book about Napoleon?” Now, with a plethora of guides and sets of rules, it is pertinent to ask “why another introduction to Napoleonic wargaming and set of rules for the period?” After reading this book and play-testing the rules, the question remains largely unanswered. Alas, it could have been so much better...” 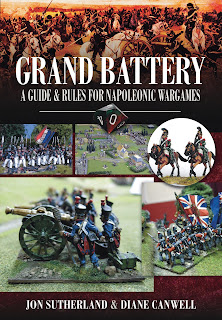 I read and reviewed this book with a sense of excited expectation. I am from the generation of Napoleonic wargamers who were introduced to the hobby with the Airfix guide written by Bruce Quarrie. While we would never now use these rules for our wargaming—a fact reinforced when we recently pulled them out for a nostalgic game, only to quickly shelve them again—the book remains one of my favourites. I still enjoy flicking through the pages, enjoying Quarrie’s turn of phrase and recalling how it generated a sense of excitement and anticipation in a 14 year old boy at the prospect of painting and building an army, setting up a wargame and getting on with the contest. I thought that Grand Battery could have been akin to a 'Quarrie' for another generation of Napoleonic wargamers; not the 'last word' on the subject by any stretch of the imagination, but a book that would provoke interest and enquiry in the period and help to stimulate, or foster, a life-long interest. I was sadly disappointed.
The book lacked ‘flair’ or ‘enthusiasm’ in the writing, had a strange structure, a disappointingly large number of major typos and errors (as my four pages of handwritten notes and corrections attest!) and then there are the rules... Any connection between these rules and a Napoleonic battle are purely coincidental!
Grand Battery is beautifully presented with many wonderful colour and black and white photos of Napoleonic wargames figures of various scales. The picture on page 73 of Prussians running up against French cavalry and guns is even reminiscent of the picture on page 6 of Quarrie’s Napoleonic Wargaming! Yet, as with so much of this book, these photos do not stand closer inspection. Where are the captions? What do the figures represent? Which manufacturer do they come from? How do the photos relate to the text?


Two examples of the excellent photos that adorn this book. The top one of Prussians running up against French cavalry and guns, reminiscent of a similar photo in Quarrie's Napoleonic Wargaming and the bottom one of British infantry in line, skirmish and column formation. Sadly, no such captions are provided in the book. 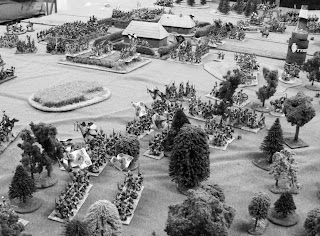 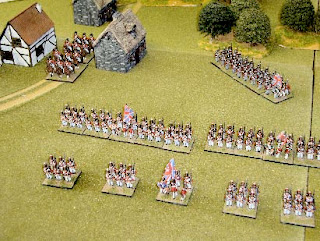