Review of Wargaming on a Budget

Wargaming On A Budget: Gaming Constrained By Money Or Space by Iain Dickie
(Images courtesy of the publishers. Please do not reproduce without first seeking permission)
Iain Dickie is a genius. He has written a book that is clearly aimed at people who are new to wargaming yet and while staying true to this, has penned a manual that has something for all wargamers.
This book reads like a fireside chat from your father or grandfather and, in similar manner, you will find yourself agreeing with some sentiments and not with others, but nonetheless respecting the author of them all (hopefully!). 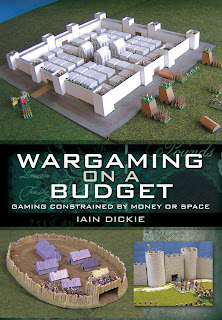 The book is enjoyable and easy to read. From the outset Dickie’s use of humour ensures that it is taken in the right frame of mind. His witty asides include warnings about going into garden (p 55), his quip about using foam hills for a pillow (p 68), his advice to cut insulation foam in someone else’s house (p 68) and warning to keep plaster glue away from the carpet because you’ll be “decidedly unpopular” as it is “not on the insurance” (p 69).
Throughout the book Dickie remains true to the idea of wargaming on a budget, giving the reader numerous ideas of how to beg, borrow, re-use, improvise and recycle materials for numerous uses associated with our hobby.
The book is packed full of useful tips. For example making a wall plug from a piece of wood rather than using a plastic wall plug—either I was not told this one by my grandfather or have forgotten; or perhaps just did not listen properly! “Measure twice so do not have to cut twice”. Making a wargames table from scratch using an old bed or a table as a base. Painting the table as sea so that it will be available for any naval wargames (since in usual circumstances it will be covered with terrain and a cloth, terrain squares or the like). Ideas for making trees, bushes and hills from materials that are easily obtained and the ‘stability test’ of terrain which is such an elegantly simple, practical idea.


The "stability test". A simple and practical idea. 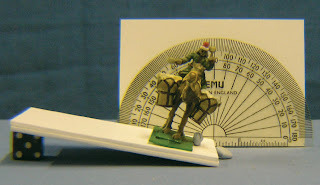 Iain Dickie extends his budget theme to choosing an army, suggesting that the choice be made such that the army may be used across multiple eras or campaigns. Such an army, he says, presents “excellent value”. He presents a number of suggestions for games that require few figures, or perhaps none at all. This will appeal not only to the budget conscious but also to those keen to try some new eras, aspects or approaches.
The many examples throughout the book are described clearly, step by step, with accompanying black and white drawings and/or photos. The pictures are similar to the real and realistic ones that adorned the magazine Miniature Wargames which he formerly edited (and which I always preferred to the glossier, over-produced photos in other mags). Following his advice you’ll soon be producing functional terrain pieces that look good without being works of art.
After reading this book I am now regularly using lego supports in place of jars, books or cans for figures that I have altered to rest on or against while the glue dries. I also have a growing store of ‘flocking’ material of various hues obtained by drying tea from tea bags, leaf tea and coffee grounds. Thanks heaps Mr Dickie.
Posted by James Fisher at 10:00