The 17th May 1742, exactly as it was historically, only the complete reverse

The Battle of Chotusitz, the second, large battle of the War of Austrian Succession (First Silesian War) was the 'subject' of our most recent game set in the mid-18thC (aka 'Mark's period'). Fitting then that his newly 'rediscovered' (i.e. cleaned out) shed was venue for the game that he planned using information from Jeff Berry's marvellous 'Obscure Battles' blog and single-handedly staged using his now extensive Prussian and Austrian armies and his/our version of Zimmermann's 'Wargames Handbook'.

The historical action, began as an encounter battle in which Prince Charles Lorraine of Austria saw an opportunity to attack with his army of around 25 000 and destroy Prince Leopold's isolated advance guard of around 12 000.

Leopold's command, with a 'sea' of white in the distance. 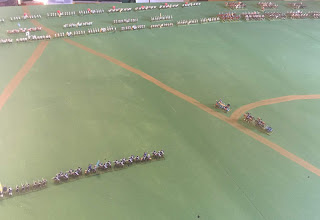 Not bad odds; if you are Austrian. 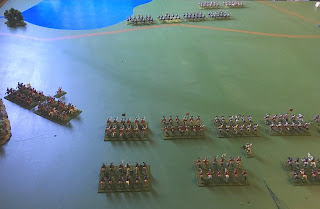 Cavalry on the Austrian left/Prussian right. 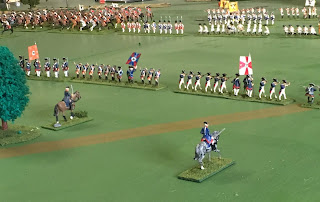 The Austrians began with my favourite, subtle tactic, 'advance everywhere'. I advanced my infantry slightly, so as not to be pushed from the board. 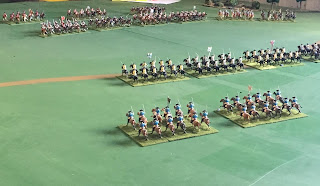 On the Prussian right, I pushed the cuirassiers forward slightly as I had a 'cunning plan'. 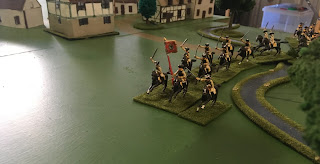 Good news for we Prussians as the lead elements of the heavy cav. arrived on the left. 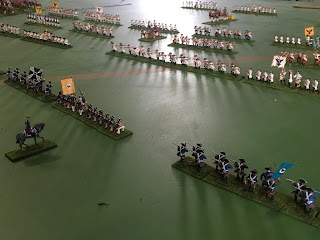 Jeetze's infantry awaited the arrival of the white horde.

The following events left me feeling pretty happy with things at this early stage. 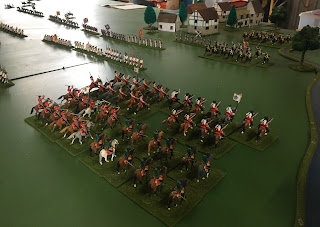 Waldow's lead 7th cuirassiers managed to deploy, with the 12th behind. Still outnumbered, but at least not in road column. 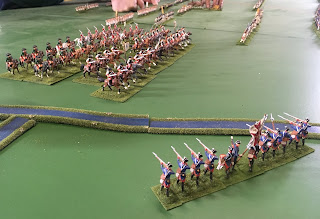 A sneaking unit of infantry loaned a hand, unseating some of the Austrian heavies who opposed Waldow's men. 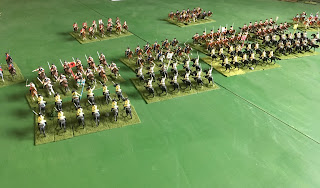 Ha ha! My cunning plan. Prussian heavies on the right charged the Austrians, ensuring the advantage of the charge impetus not afforded to their foes.
The Zimmermann rules operate in two 'cycles' in which the first player moves half distance, second then follows, any artillery/musket fire occurs, then second player moves second half, followed by the first and any mêlées are conducted. Troops that did not move in the first cycle may conduct a full charge move. This is what I did with my cuirassiers, fortunately getting the '2' to '3' on the die required for each of the three right-most units in photo. The Austrians did their part and 3/4 units failed to loose their carbines effectively.

Four mêlées in which we had the advantage, surely it should go pretty well? 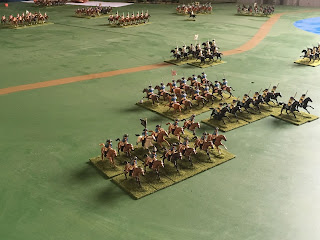 What the phuck?! Apologies dear reader, but I was astonished and full of 'blue' language as 3/4 mêlées were lost, two Prussian units retreated in disorder, two standards lost, to one captured, while the only defeated Austrian unit retreated in order. So much for the cunning plan... 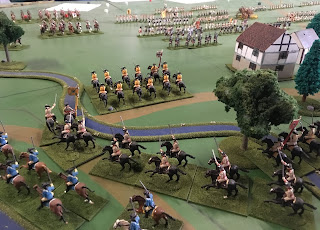 This was repeated on the left, admittedly where the Prussians had the lower odds thanks to the failure of the 12th cuirassiers to assist their fellows. This also left them (the 12th) 'stuck' in place (and effectively blocking the bridge, at the crossing of the creek). 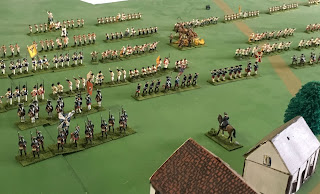 At least the first exchange of volleys had not gone too badly for our 'boys in blue'. We had, however, taken more casualties where we needed to inflict more. 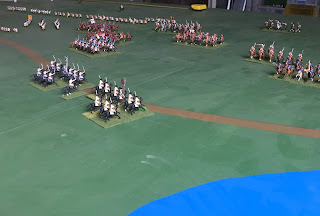 Back on the right, I sent the 3rd dragoons against the nearest Austrians (dragoons). Needed a '2' or better. Rolled '1'. Oh dear, that left them ripe to be charged in the next turn. 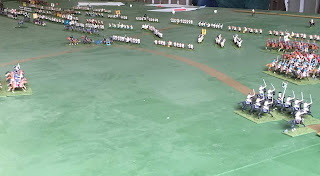 At this point the Austrians were, rightly, feeling pretty chuffed with the situation. 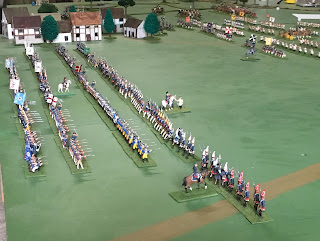 Then, the greatest captain of his age sprung his trap. On he came with the main Prussian infantry. Look at all those lovely grenadiers. Wvenge, wvenge, time for me to have some fun! In a turn or two we'd be smashing through that Austrian centre, I thought. 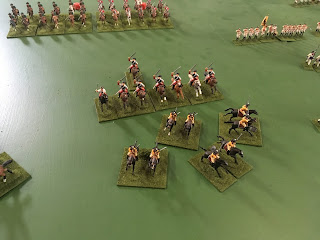 Not again? On the left, the 5th cuirassiers (heavily disguised) at full strength, charged the formerly victorious, now somewhat undermanned Austrians, who were unable to get the impetus bonus. I have to stop rolling '5's in mélée (two dice). Even though my opponents were only rolling '8's or '9's it was sufficient. More 'blue' language... 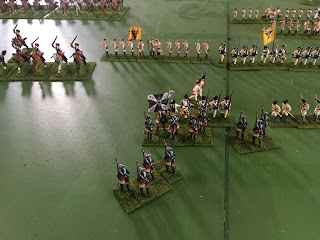 Perhaps a 'fit of pique'?
I figured that it was better for what remained of Jeetze's infantry to charge against the weakest Austrians rather than to stand and get 'blown' away or to withdrawal, since that would have left them ripe to be charged in the rear in the next turn.
It wasn't. 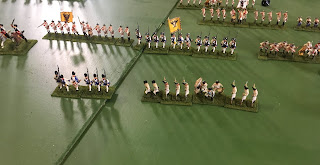 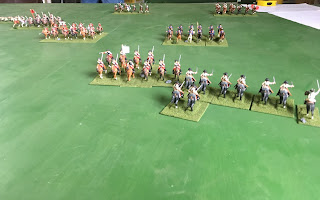 Another cavalry mêlée on the right. Combat factors around 70 to 60, so we were behind, but it only needed a few 'pips' more on the dice to win. 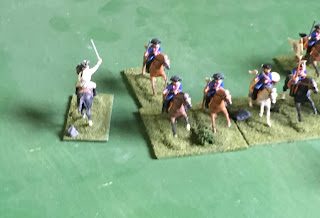 Nah. *And* Buddenbrock was captured. 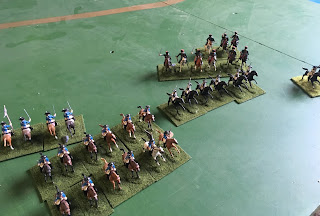 Of all things, it was a unit of pesky hussars that victoriously charged into the rear of the beaten Prussian cuirassiers. They panicked, as did three of their mates.
The language was bluer than a West Australian summer sky! 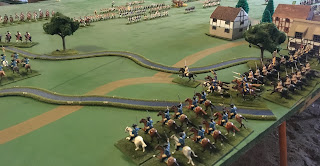 In what was to be the final act of the day, most of the cavalry on the left decided to withdraw along with the defeated 5th cuirassiers. Basically putting them back to the starting positions.


With only one unit of Leopold's (Jeetze's) infantry still on the board and five cavalry units gone, the Prussian losses required an army withdrawal test at over 1/4 losses. There is a 2/3 chance to pass. I rolled a '2'. Game over.

While basically decided by the die roll, it would have been a sensible decision for Frederick, as the photos below demonstrate. Leopold's command was shattered. In a repeat of the historical Mollwitz, the Prussian heavy cavalry had performed dismally. By withdrawing, Frederick could fight another day, keep his developing name intact, while laying the blame at the feet of Leopold. 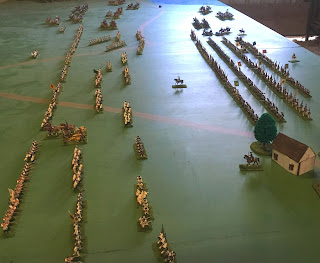 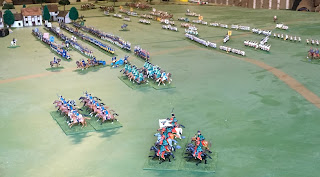 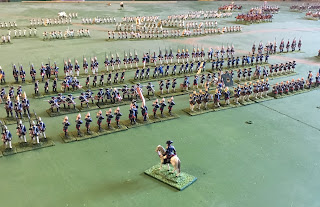 The game statistics add weight to the sense of the die in this decision.

So, the game lasted four turns (hours) and ended with one army withdrawing. As Mark quipped, "...it was exactly the same as the historical action, only the complete reverse"!


I don't usually like to blame the dice, so reflected on what I did wrong. Since it was the accumulated losses that were the Prussian undoing, I guess my mistake was to leave Jeetze's/Leopold's men under fire for too long. I should have manoeuvred to form two lines and enabled a withdrawal/exchange. This may well have worked as the Austrians would have taken too long to outflank the Prussians, perhaps...
Posted by James Fisher at 13:34 21 comments: