Book Review: Into Battle with Napoleon 1812: The Journal of Jakob Walter, Edited and annotated by Bob Carruthers
(Book cover art kindly provided by the publishers. Please do not reproduce without obtaining permission)
Pen and Sword have recently begun publishing affordable, paperback editions of accounts from eyewitnesses under the series entitled “Military History From Primary Sources”. Having seen numerous quotes from Jakob Walter in the books on the 1812 campaign that I had read last year, I was keen to read his memoir in full. 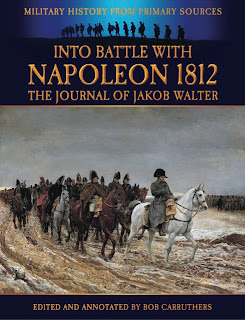 Jacob Walter’s memoir was originally translated in 1938 by Otto Springer from the University of Kansas. Springer’s preface to that original translation tells of the remarkable events by which he first learned of the manuscript.