A big part of wargaming for me is reading about the history, so I am a great collector of books.

In recent years my purchasing has become quite prolific (perhaps even over the top!) driven by the availability of so many books, large and small, 'classics' or reprints, even new material at a fraction of the price compared with those of my youth. I frequently purchase books from various on-line vendors (resellers who do international delivery, Amazon and the like); I am sure that I am joined by many of you in this. My experience has been 99% satisfied with the service and delivery of product as described.

It's against this background that a recent, rare, negative experience leads me to put fingers to keyboard to relate it to others.

I made a sizeable order from a vendor whom I have used many times previously. This involved seven, books, mainly second-hand, but two of them new, ranging in price from a mere £4 up to £34. This came to a sum total of £150.00 (including postage), or $268.96 in my language. Pretty serious money as far as I am concerned.

Imagine my reaction when, yesterday, my wife collected the package from our post office and it looked like this: 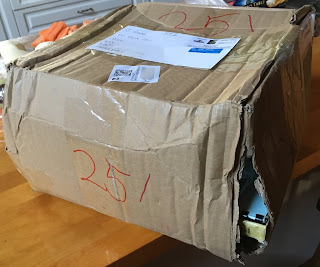 Such a thin cardboard box afforded little protection for the contents. 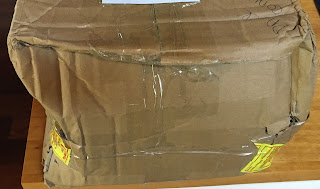 Our postal service had 'plugged' many of the holes and rips. 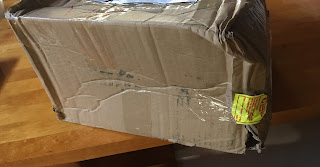 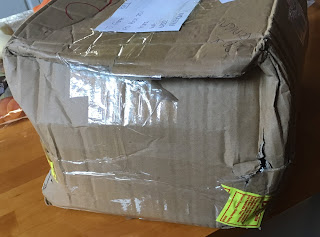 A few air-filled bags had been thrown in above the books... 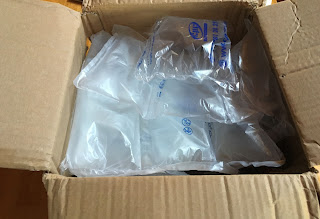 , but there was ample unfilled space for them to move and 'break-free' from the confines of the 'world's thinnest' cardboard! 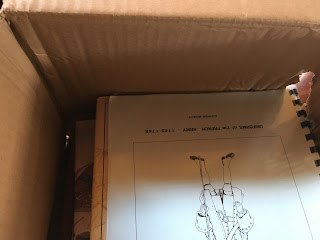 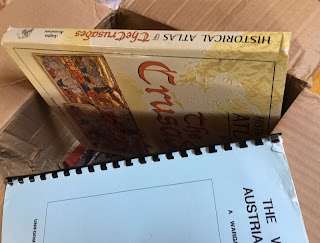 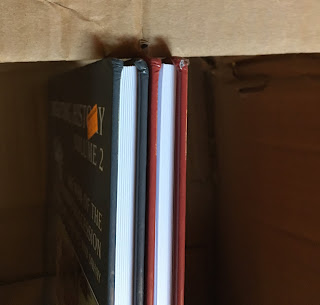 and 'new' books with damage to the lower corners of the covers. 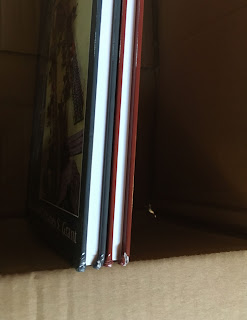 My disappointment (to put it mildly) was and is all the greater as this is now the second time that sub-standard packaging has occurred with this same vendor. The first, far worse than this, resulted in damage to a volume from the lovely "Splendeur des Uniformes de Napoleon" series. In that case, the poor packaging resulted in the book becoming water-damaged. 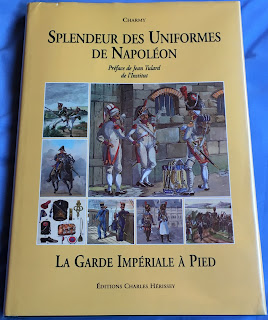 Not so splendiferous. Note water damage to the lower right corner of the front cover, 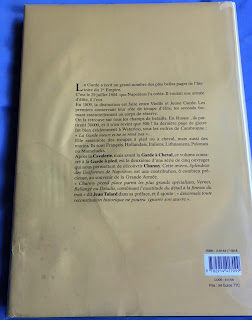 far worse on the rear, 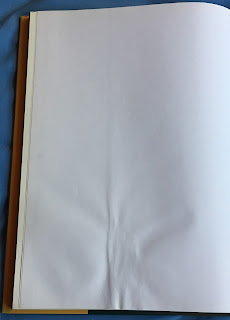 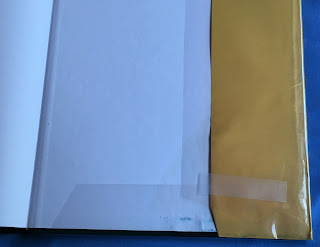 (The plastic covering is my own. I cover all of my books).

In related the water damage to the vendor, suggesting that he review how books are packaged when sending them long distances by international mail (around 15 000 km). I received an apology, of sorts, and an assurance (again of sorts) that he'd ensure it did not happen again.

I should have taken the lack of any real concern as a warning...

The, frankly, sh!thouse packaging from this vendor is in stark contrast to the obvious care and attention that others take. I may pay a little more for the privilege, but the books arrive in the same condition in which they were sent; and I have paid for.

I have sent a note with my disappointment to the vendor involved, along with photos of the packaging and (slight) damage to the books. We'll see what the response is, but, now twice bitten, I'm strongly inclined to "not be fooled again"!

I realise that this has been a bit of a 'whingey' post; not something that I want to do often on this forum. My hope and intention in doing so is to alert others, perhaps to draw comments of similar disappointment—plus to get it off my chest!

I received a reply from the vendor, with a non-apology and a reasonable offer.


Hmm, well, we normally uses cardboard like that- and thinner- with absolutely no problem- but they shouldn't really be filled with air bags, just cut down to size.
Looks as if that was placed sideways-on in transit and squashed between some heavy duty stuff- I'd be challenged to reproduce that damage if I tried. IF it had been upright the bags would have crushed but the corners would have been saved. We fill a large post office van everyday but this the first damage report we've had in many a month - apart from 2 wet packets a few weeks ago. the Post offices are normally very careful

OK, hang onto the box and the books for about 3 weeks. If you don't get a call from the postal services during that time, just ship them back to me. I'll pay of course,  cheapest method (This is where I am reminded that Royal mail is one of the cheapest services in the world)  I'll send you out replacements


I checked with Mark, for whom the ‘Wargaming History’ volumes were purchased and he’d rather have and read the books now, with the slight defects, than wait another several months for a turn around. He’s less fussed about the damage than I.

For mine, now twice bitten, I’ll put it down to experience.
Posted by James Fisher at 12:37