Whatever rows your boat - the Battle of Pylos (425BC) re-enacted

Sometimes mistakes can turn out for the best, in wargaming as in real life. I ordered triremes by mistake - mine, not theirs - from the excellent Outpost Wargaming, a deliciously inexpensive and suitable way to create as large an ancient fleet as one could possibly want. Could I find a way to utilise a hundred or so triremes as a way to try out David Manley's ancient fleet naval rules? It turned out that I could: the battle of Pylos was ideal in size, and an exciting scenario into the bargain.

At this battle, a Spartan force sent to relieve their men ended up being trapped in the harbour - later to become even more famous for the Battle of Navarino - and was defeated by Demosthenes' Athenians, fleeing out to sea and leaving their men eventually to be ransomed, a key event in the history of the Peleponnesian War. Could I recreate something like his victory?

The geography of the battle was tricky, according to a nineteenth century summary of the principal account:

Thucydides describes the harbour, of which the promontory Coryphasium formed the northern termination, as fronted and protected by the island Sphacteria, which stretched along the coast, leaving only two narrow entrances to the harbour, - the one at the northern end, opposite to Coryphasium, being only wide enough to admit two triremes abreast, and the other at the southern end wide enough for eight or nine triremes. The island was about 15 stadia in width, covered with wood, uninhabited and untrodden, (Thuc. iv. 8.) Pausanias also says that the island Sphacteria lies before the harbour of Pylus like Rheneia before the anchorage of Delos (v. 36. § 6) 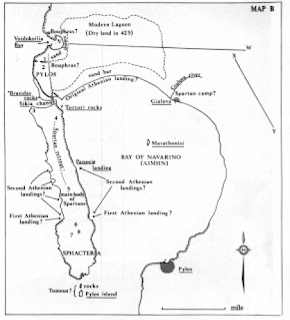 Here's what it looks like now, time having wrought some changes to the harbour, essentially increasing  it in size by creating a lagoon to the North. 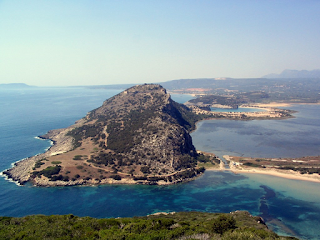 I ended up rendering it like this - here, the Spartans are in the bay awaiting their fate: 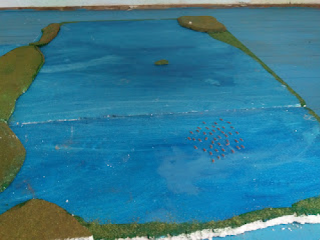 A first for me: the ground scale for this battle (though not quite the vertical) was the same as the ship scale, i.e. 1/3600. That really is the approximate size of the harbour.

And here, the Athenians approach: 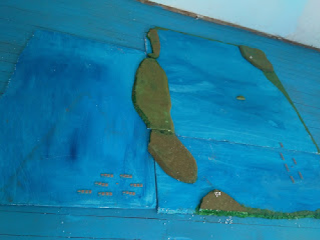 They are 49 strong, in seven squadrons of seven ships, each, plus one Admiral, facing a Spartan force of 43 in six squadrons, but of more varied size, and their Admiral. Notice the narrow entrance to the harbour - and that's the wide one to the South, shown in the photo above. Although there is some debate about how wide the entrance actually was, there is general agreement that the Northern entrance to the harbour is extremely narrow, possibly only wide enough to allow a single ship through at a time. No place to be making an entrance, though, was my view as Demosthenes.

At this point, a brief digression on the rules. David Manley himself says this in the introduction to the rules, 'Greek Fire and Roman Fury'.

'One of the regular debates that my wargaming chums and I seem to have is the one about “whose role are we taking when we play a wargame?” Are we playing ship’s captains or fleet admirals? In general naval wargamers tend to assume the role of admirals whilst demanding a level of detail more appropriate to games set at the lower level. For most cases this is isn’t too much of a problem as the numbers of ships tends to be relatively small, and there are fleet level rules with appropriate levels of abstraction available for most periods. However, the ancient period seems to one where all available rules operate at the ship level. Obviously this makes battles such as Salamis, with hundreds of ships involved, difficult to handle. I wanted a set of rules that could be used to recreate these enormous battles whilst placing the players truly in the roles of admirals and squadron commanders. At this level the fate of individual ships is unimportant. Hence, “Greek Fire and Roman Fury” was born.

The basis for these rules is a theory that the naval battles of antiquity were fought in a similar style to land actions. Therefore, in these rules, the respective fleets are represented by squadrons rather than individual ships, which are manoeuvred around the “battlefield” in a similar manner to armies. After a few false starts I decided to use “Fire and Fury” as the basis for the system, hence the name I finally selected..'.

On this basis, you can be sure of what you are getting, and GFARF do not disappoint. Squadrons are represented by a base with anywhere between two and eight ships, commanders have qualities that affect their performance, ship data are provided for a wide range of ancient types - we were both Aphract Triremes, so no shooting on this occasions, just melee. Squadrons have a limited range of formations - the Athenians were in the Diekplous - whilst morale and movement are combined in a single table, as in F&F. Simple, straightforward rules that will be well-suited to a major ancient fleet action once David has finished his final tweaks.

As my ships passed the headland to their North, with Pylos to their South on the other side of the entrance to the harbour, I felt quietly confident: 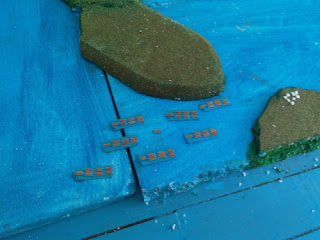 The Spartans did not lack courage: they came on immediately.. Out we went into single line to face theirs: 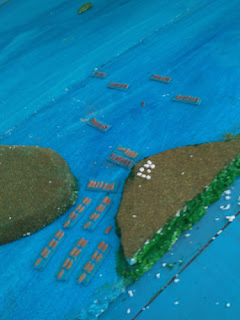 And some tough melees ensued. At first it did seem that the larger Athenian squadrons would have the advantage, despite the fact that a significant proportion of my force was still trapped in the entrance, undoubtedly the right thing for the Spartans to do: 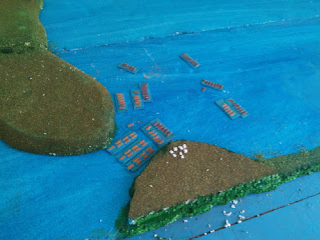 But as the fight began to break up into squadron actions, the numerical advantage of the Athenians was not available to their best advantage. 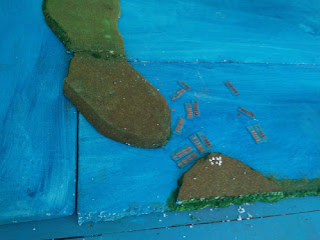 At the height of the battle, the forces were still struggling around the harbour entrance, a quite different state of affairs than in history, where by this time the Spartans had fled. 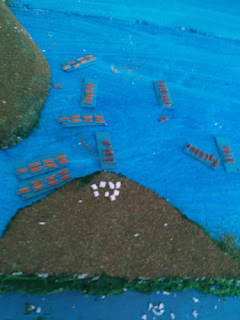 The Athenian formation had not played to their advantage, and their losses became heavy - two squadrons in a single move, in fact, and even a couple of ships lost to collision. By the end of the battle, ten moves in total, all their remaining ships could do was to decide to turn tail and flee, leaving the harbour to the Spartans, no doubt a significant number of Athenian prisoners from those who had escaped sinking ships and swum to shore, and most importantly - no ransomed Spartan army. What misplaced confidence on my part! 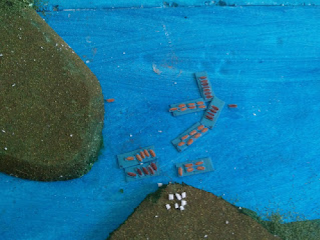 This was a most enjoyable and rewarding test action, which gave us confidence that in due course we would not only be able to fight much larger ancient naval actions, such as those of the Punic Wars, but would be able to integrate naval actions and land actions into a campaign, should we choose.

Thucydides History of the Peloponnesian War. 4:11-14.

I follow numerous blogs. They are a constant source of interest, stimulation and often lead me to topics of history about which I was not previously aware. So it was that a post on Keith’s ‘Bydand’ blog about a Russian Civil War game using ‘The Back of Beyond’ rules lead me to a search on the internet, to ’discover’ Hopkirk’s book and hence to borrow it through our local library. 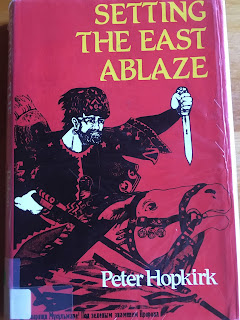 This book, ostensibly, is about the Bolshevik’s attempts, under Lenin and then Stalin, to spread the Revolution to central and western Asia, particularly then British India. At one level it is a boys own adventure, “like a Buchan novel” as Hopkirk describes it; but it has a darker and more menacing edge. To me it is more akin to a Le Carré novel or an episode of Callan, except that, as is so often the case, fact is stranger (and far more harrowing) than fiction.

Spanning 1918–1949 the book describes British clashes with Russia—spying, espionage as well as political manoeuvring and grand-standing. This began in the late 19th century with what was known as the Great Game, ceased when the two were allies in the First World War and then re-started under Bolshevist regime. Thus the concurrence of the Russian revolution with what were to be the last months of the First World War intersected with the struggle for empire. As I said previously though, there is far more to the book than this.

The ‘more’ is that the book is really about nations and individuals using central-west Asia as their ‘playground’. The events described by Hopkirk occurred to the north and north-east of Afghanistan and northern India, along the silk road—modern day Uzbekistan, Tajikistan, Kyrgyzstan, Xinjiang and Mongolia. Where Bolsheviks, White Russians, English, Chinese, Japanese or assorted ‘exiles’ from these various camps, sought to dominate the region through espionage and manipulation, or simply by force of arms or terror, for their own interests and/or aggrandisement. 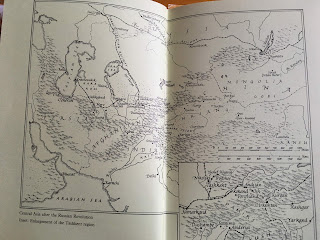 Events in the book take place around modern day Uzbekistan, Tajikistan, Kyrgyzstan, Xinjiang and Mongolia. Detailed maps help the reader to place the location of people and events.

Amongst the individuals and actions that Hopkirk relates are the coup in Tashkent lead by former junior Czarist officer Osipov, the Bolshevik reprisals following its defeat, brutal actions by the White Russian army and Bolsheviks alike and, perhaps the worst of all, the activities of the ’bloody baron’, Baron Ungern-Sternberg. 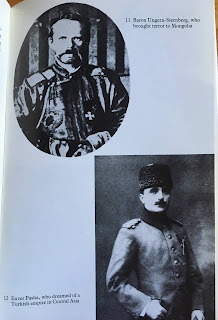 Sixteen pages of black and white plates show contemporary photographs of the key participants and some of the locations and actions described in the book.

The appalling actions of the baron make for particularly difficult reading. Even though Hopkirk spares us from too many details, the three days of excesses of his men, upon the capture of Urga (modern Ulan Bator), amongst other horrific actions, are described in sufficient detail to convince me that he was worse than most, if not all, of the most infamous, sadistic tyrants of history.

Immersed in these events, Hopkirk describes the ‘adventures’ of Colonel Bailey and Paul Nazaroff (a White Russian leader in Tashkent) and  Lt. Col. P.T. Etherton, British Consul-General at Kashgar. Here we are treated to amazing tales that outdo any ‘boys own’ annual as well as some truely humorous incidents. 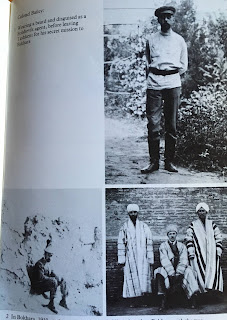 Photographs of Colonel Bailey in some of his many guises.

For example, in the case of Colonel Bailey, when it became too dangerous to remain in Tashkent, we follow him through a series of narrow escapes in his various hiding places—examples of boldly hiding ‘in plain view’—escaping to the mountains of Kyrgyzstan, being walled in to a room to avoid a house-to-house search and even entering the Soviet secret service in the guise of an Albanian army clerk. Early on (in fact in October 1918, before he had left the city), the Cheka had assumed that Bailey had likely escaped or been eliminated by the Germans. “The evidence for the latter, it seems, rested on the fact that he had disappeared without his toothbrush. This, the Bolsheviks felt, no Englishman would ever do” (p. 59).

Hopkirk’s book is engrossing from the first page, although it took me until around chapter four to weave the various threads of events and individuals together in my mind (as a complete newcomer to the period). It is a little-known part of the 20th century, but one can see how these events contributed to those that many of us lived through (vicariously for most) and gave it the now often-used epithet of the ‘violent century’. While much of the subject matter is gut-wrenching, the book is fascinating, at times entertaining and always enlightening. 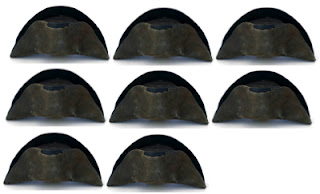