Wilko and I caught up on the weekend for a small and most enjoyable Seven Years' War game. He was 'master of ceremonies' providing all for this small action which came from Volume 1 of Charles Grant junior's excellent scenario books. 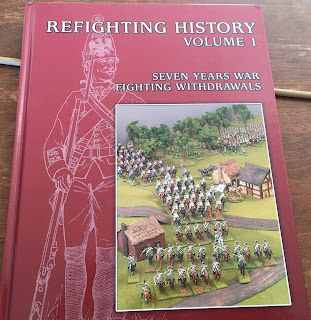 Originally a rearguard-withdrawal by the Imperial-Austrian forces (quelle surprise!), Mark decided that they would not over-estimate the on-coming Prussians and we'd run it as a straight fight.

I took the Prussians, lead by General Finck (bringing to mind the "Wizard of ID") and Mark the Imperial-Hapsburgs. 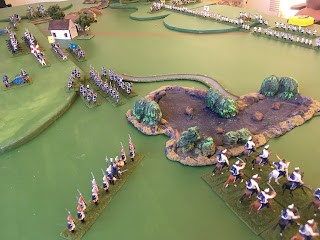 I decided to use the subtle tactic of 'advance the whole line'. with 1st brigade's single grenadier battalion and Belling hussars trying to get around the Imperials left flank, while 2nd brigade's Szekely hussars, a battalion of the Puttkamer regiment and freies bataillon Collignon tried a left-hook through the woods on the enemy's right. 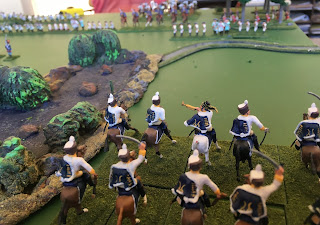 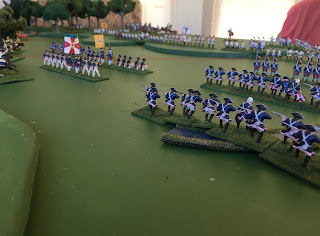 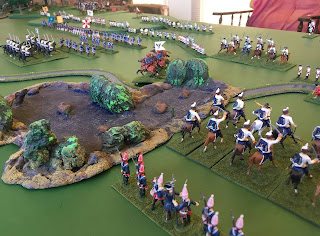 Things seemed to be progressing well, although the Belling hussars refused (twice) to charge the infantry ahead of them. 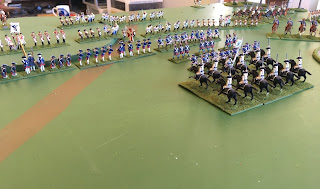 In the centre I had advanced the infantry ahead of the supporting Horn cuirassiers in what was to be a critical mistake.

Two wins for the underdogs! 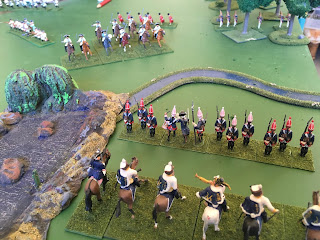 Finally, the Belling hussars charged the infantry, taking fire on the way in, but winning the low-odds mêlée. They then sensibly withdrew behind the grenadiers.
(The Imperial dragoons seen in the distance later charged the grenadiers who sent them off with a 'bloody nose', thanks to better dice in a mêlée with dead-even factors). 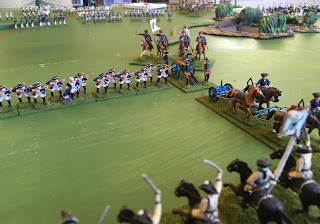 Not to be outdone, the small unit of Imperial hussars charged the Horn cuirassiers in the flank, won their own low-odds mêlée and rode on to take out one of the Prussian batteries. They withdrew, having scored this considerable prize. 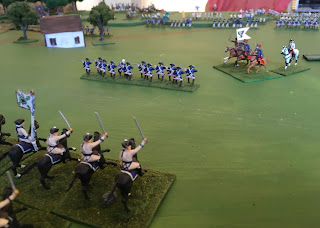 On the Prussian left, the flank force had done better than expected. The Szekely hussars and battalion of the Puttkamer regiment worked through the woods to emerge on the right of the Imperial army, while the freies bataillon Collignon harassed and drove off the lead infantry battalion—I did not get that one in a photo, so you'll have to take my word for it! 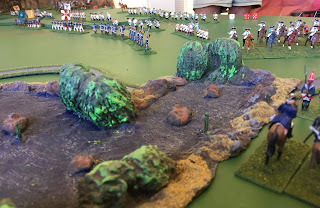 In the centre, the lines of infantry had been wearing one another down, neither side gaining the ascendency.

In fact, so much so that both armies needed to take a withdrawal test for 1/3 army losses, which both failed*!

With losses about even, the game was called a minor Imperial-Austrian victory as the captured/destroyed battery tipped the victory points in their favour.

A great little game, lasting a mere six turns, but which provided a lot of interest, nail-biting close combat decisions and loads of fun.

(*I omitted to take the end-of-game photos--oops!)

One-sided 'Marc' invited us down for a redux game of the Battle of Auerstadt at yesterday's Napoleonic Wargaming Society games day. Wilko had played the game back in January so did not want to get back on the horse and Julian was unable to make it, so it was left to me to 'represent' the ANF. I duly headed down the hill, arriving about thirty minutes behind the scheduled 9 am start (sorry fellas). I was so pleased that I did as it was a most enjoyable game played, as ever, in the 'right' manner.

In a reversal of roles, I'll provide the brief, one-eyed report here ahead of Mark's more detailed report on his blog (hopefully I have the names of the formations about right!). 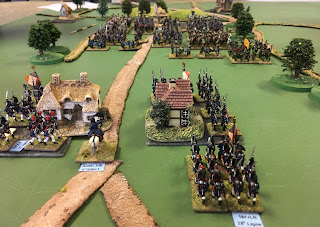 I arrived in time for the French phase of the first turn. Gudin's division positioned in and around Hassenhausen faced Schmettau’s division and Blücher's ad-hoc advance guard.

Learning from history, Stephen did not go for the immediate attack, preferring to try to soften up the French defenders and await the arriving Prussian masses. 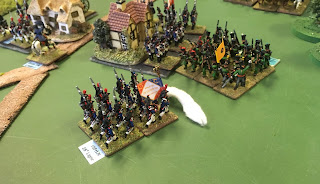 After a time (or was it a few times?) he did, though, send Blücher's fusiliers (heavily disguised as Nassauers—by necessity, there were a lot of 'stand-in' troops in this game, which, of course is not a problem at all and has no impact on play). They did not fare well, copping fire from regiments from Petit's and Gautier's brigades on Gudin's right. 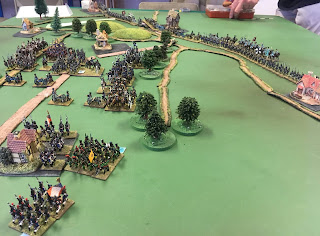 Meanwhile, Wartensleben’s and Orange's divisions snake towards the front. 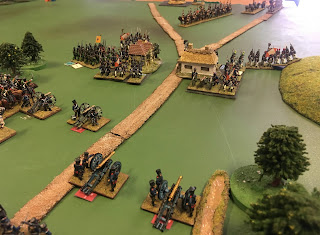 Reinforcements were coming to Gudin's aide too, in the form of Vialannes' light cavalry^ and Friant's division, along with the Iron Marshal himself. Note the Prussian batteries in the foreground which were not making much impact due to Stephen's average or worse rolls and my generally above average counter-rolls. I do like the way Napoleon's Battles deals with 'the imponderable with each player throwing a D10.
(^It is interesting that, while Friant, Gudin and Morand are 'household' names amongst Napoleonic buffs, Vialannes is a 'nobody'. I read in one of the accounts that Davout was most displeased with his performance. Little wonder he amounted to nothing, when such a battle and the fact that the few French light cavalry existed at the end should have covered him in (at least) reflected glory!) 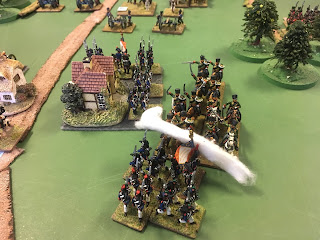 The Prussian fusiliers retreated (invoking the extreme sounding 'voluntary rout' under Napoleon's Battles), allowing the "Blücher" hussars to charge in. Gautier's boys formed square (which is more "prepared to receive cavalry" at this scale, as Mark explained), seeing them off fairly easily. 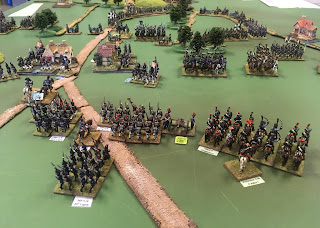 In due course, the three Prussian divisions were almost in position to attack, while the reserve divisions approached in the distance. 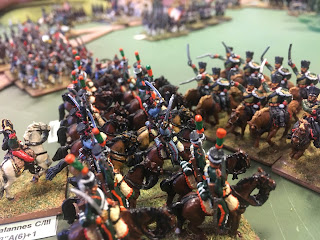 First cavalry mêlée! An indecisive affair so the attacking Prussian hussars withdrew to reform. Sounds a lot like the historical action. 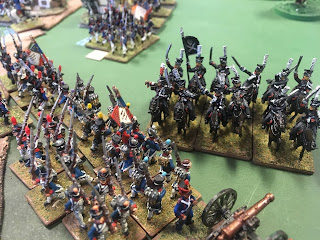 More Prussian hussars charged in. Not actually the death's heads lads, but they went for a death or glory charge. Kister's brigade (Friant) got themselves 'organised to receive' and these horsemen too recoiled. 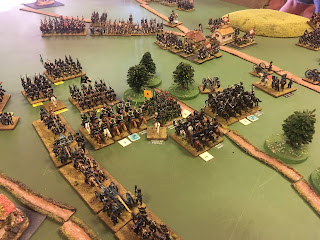 View from the west (Prussian) side on the eve of the decisive turn of the game. 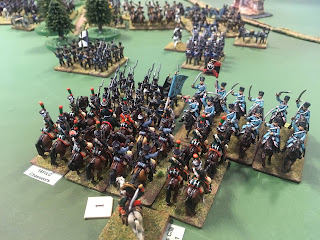 Vialannes' horsemen charged some of Wartensleben’s infantry who failed to 'prepare to receive' and could not be saved by the supporting dragoons. 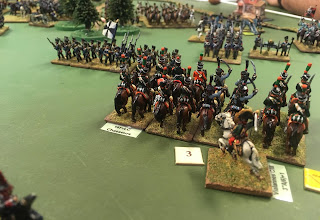 The French horsemen then charged the next unit of infantry, who did get organised, sending Vialannes' men back to reform. 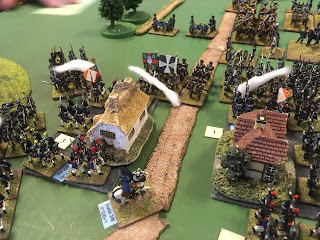 The signal was made. Prussian attacks all along the line. Our troops though, held firm everywhere, inflicting some bloody noses. 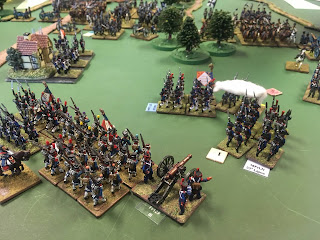 So we counter-attacked, routing Wartensleben’s boys who had formed 'square' in response to the charge of Vialannes' brigade. 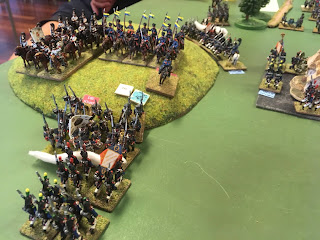 A regiment of Gautier's brigade attacked to finish off their previously unsuccessful assailants (rear of photo), while a regiment of Brouard's brigade (Morand's division) attacked some isolated Prussians who had advanced to fire on some of that division's troops in square (foreground). 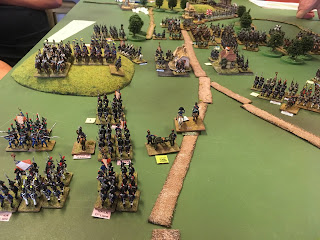 The tide well and truly turned, and old father time tarryng-not, we called the game at that point.


Thanks to Mark and Stephen for a great game. It is always fun when you take the better side and win, but it was mainly because of the way in which we played and Mark's umpiring making it all run so smoothly and easily. All played in a spirit of fun and historical interest—even if I did follow Stephen to the dark side, selling my soul by using two, or was it three?, re-rolls!!

A great day—finished off with some beaut racing at the Motorplex.
Posted by James Fisher at 11:22 10 comments: