The Battle of Bailen, which resulted in the surrounding and surrender of General Dupont and 13 000 troops, is considered the first significant loss by the French army during the Napoleonic Wars. It “caused a sensation throughout Europe, and its repercussions, together with Junot’s defeat at Vimeiro persuaded Napoleon of the need for his personal intervention in the Peninsula’ (Chandler 1979).

I put together our scenario of the battle in September 2010, but we did not play it until May 2012. The forces present were determined based on a conversion of 600–800 soldiers present per battalion on the tabletop and 400–600 troopers per cavalry unit on the tabletop. The game lasts for fourteen, thirty-minute turns (07:30–14:00).

There were Swiss units present on both sides during this battle. As with their historical counterparts, the ‘Spanish-Swiss’ troops of Schramm's brigade of Dupont’s army will surrender to the Spanish on a modified die roll of ‘0’ if within 22.5 cm (9”) of any Spanish infantry unit. The die roll is reduced by one for each kill suffered by the infantry units of Schramm’s brigade (only). 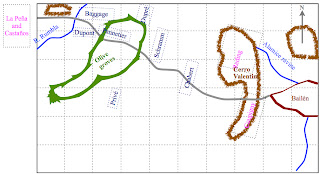 Map for our scenario of Bailén

We played the game twice, firstly using the Polemos General de Division rules and the second time using Shako_ANF. In both battles Julian and I took the French and Mark the Spanish. 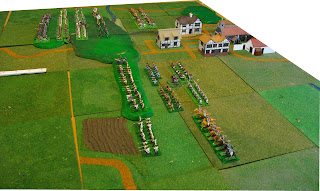 The eastern end of the table looking north along the Cerro Valentin with Coupigny's division in foreground and Reding's in the distance. Bailén is at right. 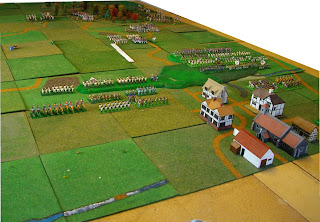 Looking west from the Spanish position, Bailén in the foreground, French army in the distance.

From the western end of the table, French baggage just visible at left-hand foreground, with Dupré's light cavalry ahead of it. Trees in centre (representing the olive grove!) with Pannetier moving through and Privé to the right. In the distance Schramm and Chabert are in position to attack the Spanish. 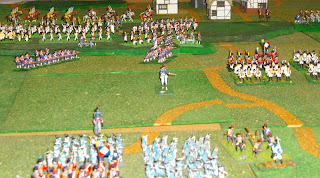 Reding's battery successfully bombarded one of the Swiss units of Schramm's brigade and forced it back 1 BD. Reding's infantry moved to threaten Chabert's flank.

Turn 2, 08:00: Chabert's units moved towards Reding's line and fired at no effect.
Reding's gun bombarded the 4th Swiss and got a cease fire result. 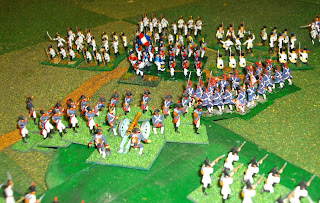 Another view of the successful attack by Reding's troops 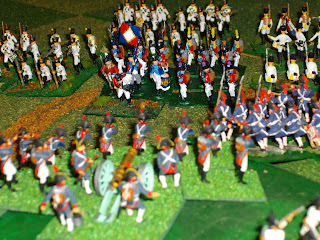 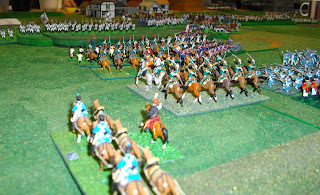 The Point of impact. 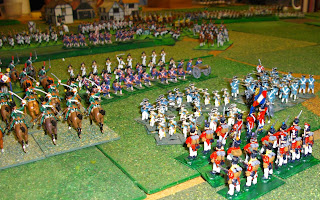 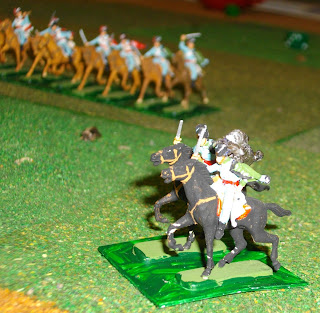 Turn 5, 09:30: Tempo won by the Spaniards. Reding's infantry fired and caused a shaken level on chasseurs. The French removed the shaken level in their tempo and charged Reding's 'line' infantry who formed square. The chasseurs were forced back with two shaken levels (supporting unit were pushed back too).

Pannetier's and Privé's troops moved up but too late to become involved in the battle. 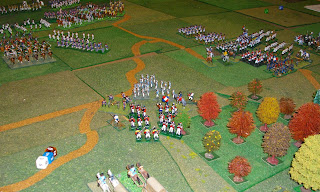 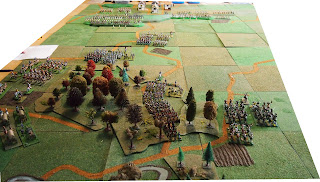 The set-up; as for version one. 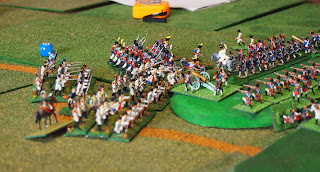 Turn 1, 07:30: Reding's artillery fired at the attacking French with mixed results and Chabert's division began its attack on Cerro Valentino. Dupont sent orders to Dupré and Schramm to support the attack, the aide reaching the former (for turn 2). 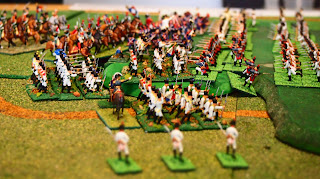 Turn 3 08:30: Chabert's brigade continued its attack on Reding's position on the Cerro Valentino.

Dupré's chasseurs charged the Walloons which had formed square...

allowing the 4th Swiss to attack and break one of the Walloon's squares. However, the 1/4th Reserve Infantry from Chabert's brigade failed against Spanish Reyna regiment.

Dupré's 1st Provisional Chasseurs broke against the square of the Walloon Guard, but his brigade passed the morale test at 50%—phew!

Comin' through the orchard

Turn 4: 09:00: The 4th Swiss broke the square of the Spanish Corona regiment. The 2nd Provisional Chasseurs tried their luck against the Walloon square; they retreated, but were not broken. 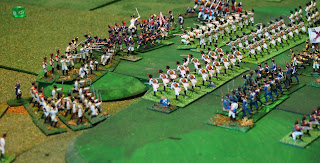 A close-up view of the action on the Cerro Valentin. 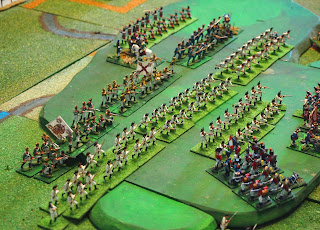 Another view of the combat on Cerro Valentin. 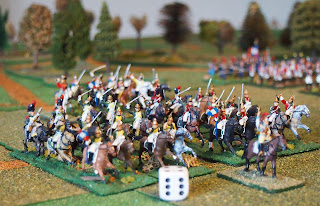 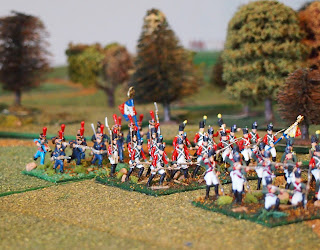 and the Garde de Paris and Garde Marins of Pannetier's brigade approach the ridge. 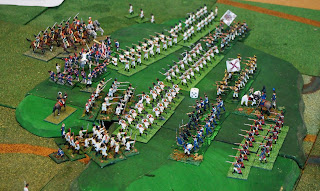 The 2/4th Reserve Infantry from Chabert's brigade attacked the second line of Reding's position and forced back the Spanish 3rd Swiss infantry in Reding's brigade. The 4th Swiss (French) were broken after taking further casualties... from skirmisher fire! 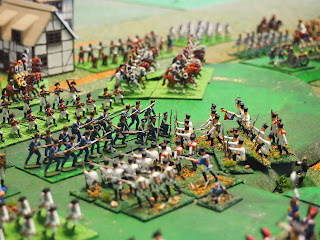 and broke them. The 2nd Provisional Chasseurs overran Reding's horse gun, then rallied back into line.

Turn 6 10:00: The remaining battalions of the 4th Reserve Infantry of Chabert's brigade attacked Reding's Spanish 3rd Swiss infantry, one French battalion was broken by the defender's volley, while the other was stopped in its tracks.

Turn 7: 10:30: The last battalion of Chabert's 4th Reserve Infantry was broken by a volley from the Spanish 3rd Swiss infantry of Reding's brigade (no photo). 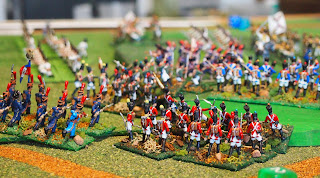 Turn 8 11:00: Reding's brigade counter-attacked towards Schramm's Swiss (seen out of focus in distance) as Pannetier's brigade attacked the Spanish position. 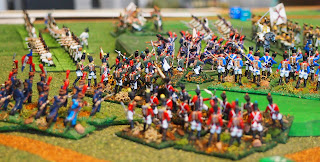 This attack by 1/Garde de Paris and 2/3rd reserve legion...

was pushed back by the square of the Walloon Guards.

Turn 9 11:30: The Jaen regiment from Reding's brigade (brown coats three photos above) was broken by artillery fire from Dupont's corps artillery (no photo).


Turn 10 12:00: The last Walloon battalion was broken by 2/Garde de Paris supported by the Garde Marins (no photo). Piré's 2nd Provisional Dragoons charged a square of Coupigny's division and retreated. From the west, La Peña's troops arrived in the command phase! 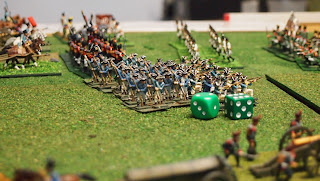 Reding's division was not yet at 75% losses, so was still able to fight on demoralised... 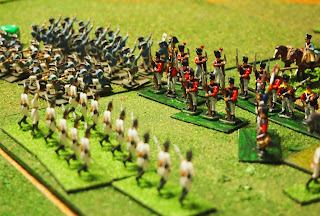 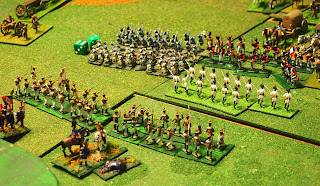 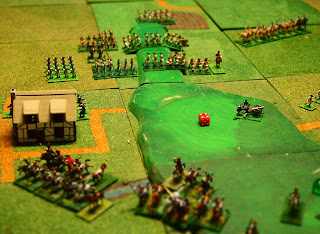 The Cerro Valentin at game's end. 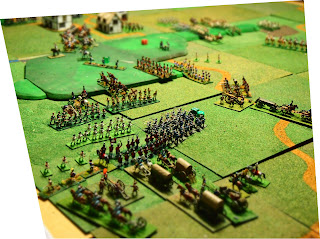 Schramm's Swiss changed sides as the French baggage came up. 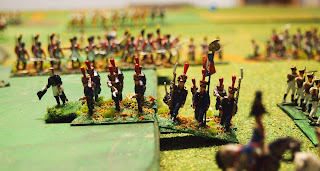 The Garde Marins; off to a prison hulk... 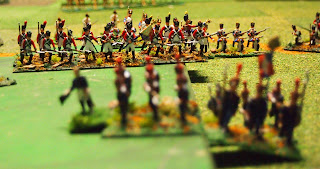 and the 1/Garde de Paris and 2/3rd Reserve Legion. 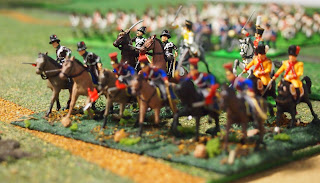 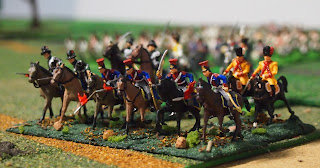 As expected, this was a tough gig for the French player, irrespective of the rules used, but it was by no means a certainty for the Spanish player. The best hope for the French is to win it early. The second version enabled us to drive hard at Reding's defences and, as the closing photos show, thanks to Chabert's brigade and then the support of Pannetier and Piré's cavalry, his position on the Cerro Valentin had been driven through. This was not enough though as the 'net' of Coupigny's and La Peña's troops was closing around the French when the Schramm's Swiss decided not to continue the fight against their brothers.

It became evident in the second version of the game that it was impossible for the French baggage to make it off the table within the allotted time, even if it had been able to move at full rate every turn. The scenario designer had not done the calculations properly! Fortunately it did not make a difference to the outcome, but it does reinforce that, ya gotta check them scenarios carefully and it always to do a play-test! :)