Looking For More
This is a special review of this ‘publication’ from Osprey.
I received an email from Osprey today announcing the release of the Battlelines Borodino 1812. According to the blurb this is “...the second in the Battlelines series of apps, which give a unique look at some of history's most famous battles. Battlelines: Pearl Harbor, [was] the first in the series...”. I’d not heard of this series before but, since the topic was Napoleonic, and Borodino to boot, it sparked my interest. 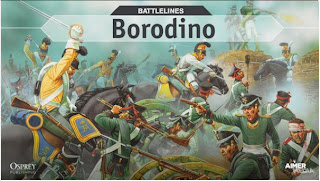 For an outlay of just $2.99 it seemed worth a look. It’s worth bearing this price in mind as you read my critical review below.
What you get
This ‘app’ is like a mini e-book. There are three ‘chapters’. The first introduces the campaign and battle, the second features details of each stage of the battle and the last describes the events of the campaign following Borodino.
Build Up, the first ‘chapter’, has sections about The Road to Borodino, French Forces and Plans, Russian Forces, Invasion and Chronology. Each of these has a brief text description and a couple of relevant pictures to the side. These all zoom to fill the majority of the screen when ‘clicked’. The enlarged text screen has buttons to enlarge or reduce the size of the text as desired by the user while each picture has a small script icon that opens a text description of the image and acknowledges the artist. The sections about the French and Russian forces feature two text subsections, one about the commanders and the second the order of battle for each army at the battle. 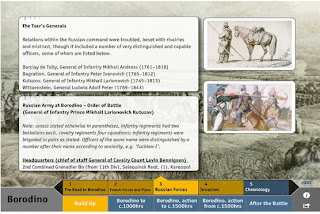 Example of one of the sections in the first 'chapter', this one on the Russian Army.
The orders of battle are presented down to brigades, with commanders provided down to the same organisational level. For each brigade each unit is listed along with the number of battalions or squadrons present. Unfortunately, and surprisingly, the batteries are not listed nor even just the total number of guns with each brigade, or division or corps. It’s also most disappointing that the number of men in each unit are not given since estimates of these are readily available.
The ‘chapter’ about the battle is covered by three screens; Borodino to c.1000hrs, Borodino, action to c.1500hrs and Borodino, action from to c.1500hrs. Each of these features a map of the battlefield with rectangular blocks that represent about a division  of troops. 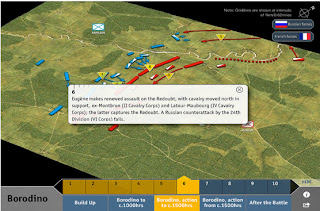 Each map has numbered subsections which, when ‘clicked’, add a numbered triangle to the map that indicates a part of the action. When ‘clicked‘ these triangles display a short piece of text explaining what occurred at this point. At first I thought that these maps were of limited value but, on further and closer inspection and by clicking on the options to add detail, I found that they reveal a wealth of information and clarity to the description of the battle.

The final ‘chapter’ has sections describing the end of the battle and evaluating the ‘outcome’, the occupation of Moscow by the Grande Armée and the Retreat and Aftermath. Each of these is presented in the same way as those in the first ‘chapter’.
This is a brief history of the Battle of Borodino and 1812 campaign. While short, the text provides an adequate summary and, pleasingly, is written in descriptive terms presenting information rather than opinion.
What you don’t get
What is presented in this ‘app’ is good but my greatest criticism is what is not here but could so easily be provided in this format. For example, the orders of battle, in addition to providing the missing details that I mentioned above, would have been superb had the name of each unit been linked to an image showing the uniform details and perhaps even further information like the campaign history, and even links to further information on the web—other Osprey publications perhaps?!
I mentioned above that the maps of the battlefield were more impressive than I first thought. These too could have been improved further with more links and interactivity. The numbered sections indicating particular actions could have included images of the battlefield or of a painting illustrating the particular action. Linked video files could show the battlefield today, animations of particular action, a topographical ‘fly-through’ of the battlefield; even some video of the bicentennial reenactment—although this latter is not something that I am particularly keen about. Hey, they could even make a film based on photos from a bicentennial wargame of the battle; one by the ANF perhaps (ha, ha)!!
These are just a few, immediate ideas that come to me after looking over this ‘app’ for just a few hours. There are is so much more that could be done, without descending into meanlingless ‘e-candy’.
Conclusion
In making the above criticisms I am aware of the fact—and which I remind all of you—that it only cost me $2.99.
It’s great to see Osprey moving into the digital media with such novel presentations. The interface is ‘clean’ attractive and easy to use and the images are reproduced clearly, but there is so much more that could have been achieved. I hope that this is merely a taste of what is to come in future ‘publications’ of this sort.
Overall rating 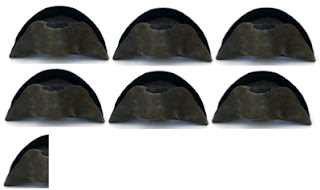