Wargaming Leipzig 2013 (5): Preparing For Lützen; Part One Of The Prelude to Leipzig

The table is all set for our slightly belated game to recognise the bicentennial of Lützen. We have scheduled the game to begin on 15th June. We plan to run it over two of our ANF ‘sessions’.
I have provided an overview of the scenario in a previous post. The table for the game is pretty straight forward, featuring the ‘quadrilateral of towns’; Rahn, Kaja, Gross Görschen and Klein Görschen, the Floßgraben, Monarch's Hill, Starsiedel and Eisdorf. 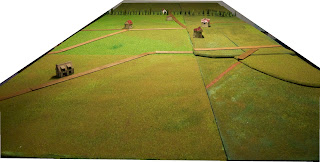 Looking roughly north-east along the table. Starsiedel is in the left foreground, Monarch's Hill to the right and the quadrilateral of towns in the centre; Rahna the closest of them, Gross Görschen beyond that, Kaja to the left and Klein Görschen the furthest of the four. The Floßgraben is represented by the line of trees and Eisdorf is just beyond it. The table is 4.8 m x 2 m, scaling to 9.6 km x 4 km. 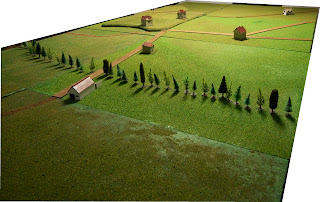 From the north; Eisdorf and the Floßgraben in the foreground. Most of the action will occur on the other side (SSW) of this. 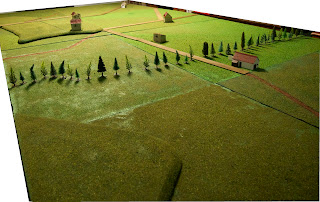 This time from the east looking towards Eisdorf, the Floßgraben and the quadrilateral of towns beyond it. MacDonald's XI Corps will enter the table around the road to Eisdorf in the command phase of the 16:00 turn.

Looking north-east across Monarch's Hill. Dolff's Prussian Reserve cavalry will begin the game around the area of the left foreground of this photo, facing north-west.

A close-up view of Starsiedel with Monarch's Hill in the distance. Girard's 10th Division of Ney's corps will begin the game around this town.

The victory conditions reflect the battle (of course!). Lützen was the battle for the quadrilateral of towns, so these are the geographic objectives for this scenario. Since the destruction of the enemy army was the true objective, points are also awarded for broken and ‘damaged’ enemy divisions.
The names of the objectives and their value for each army are given in the table below. In order to claim the objective points for a geographic objective it must be either occupied by friendly units (only) or clearly within the area controlled by the friendly army. If neither side controls an objective, neither may claim the objective points.

Revised plans for the 1813 Bicentennial

We have decided that, having pushed ourselves really hard to meet the deadline for the bicentennial of Borodino, we are gonna do things as and when we can for the battles involving the “big battalions” of 1813. After all, Lützen is nearly as big as Borodino and Bautzen is larger!

Our preparations for Leipzig continue and our games of Lützen and Bautzen are a key part of this preparation. At this stage we expect to stage our bicentennial game of the Battle of the Nations at least a year after the event.
So, it will be Wargaming Leipzig 2013 (in 2014)!
Posted by James Fisher at 20:25