We left Phil at the end of part one of his bicentennial game of the Battle of Tolentino (2nd May) with Murat having 'beaten' Bianchi’s army, in a rather close-run thing in which "his (Murat's) forces were rather depleted". Will he be as successful on 3rd May against Bianchi, reinforced by General Neipperg?

It’s hard to imagine it on this dreary rain swept afternoon but I refought the second part of the battle of Tolentino on the actual 200th anniversary back in May. Once again I opted for a largely historical deployment. D’Ambrosio, who historically was wounded in the first battle, was replaced by D’Aquino. His lesser talents are reflected by a -1 morale, one less dice for firing and a command roll whenever they are asked to take a fresh offensive action.

Lecchi was sent on a wide flanking movement (as in 1815).

Neapolitan reinforcements are expected from 12:00...

Lecchi’s flanking move gets off to a slow start 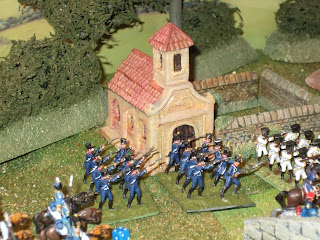 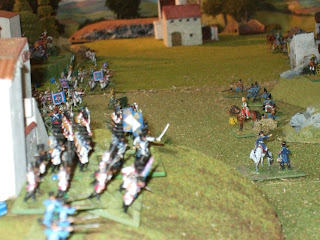 An exchange of artillery achieved nothing – just getting the range I guess! 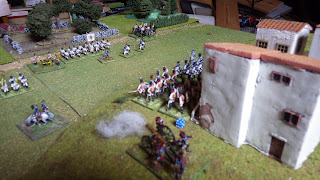 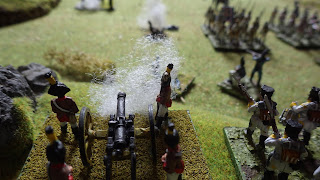 The Austrians remain in their strong defensive position and their heavy fire destroys the 4th Light Infantry Regiment – Things are not going well for Murat! 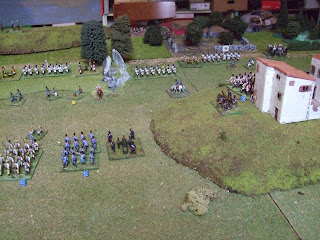 Lecchi’s flank move (its movement determined randomly) is progressing at a snail’s pace.

A fierce fight develops over Castello del Rancia on the Austrian right... 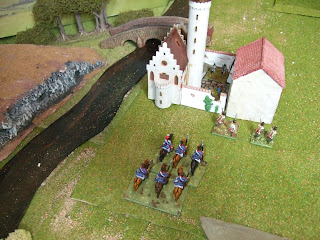 The Guard cavalry spearheads the attack on Murat’s left, bowling over the Austrian Hussars and destroying them. 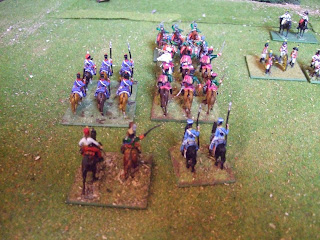 The Guard Voltiguers attack one of Eckhart’s Regiments which retreats but the Velites are held up by Casone’s stout walls: 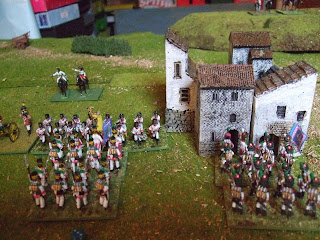 Things go badly for the Neapolitans as both of their attack columns are repulsed with losses. 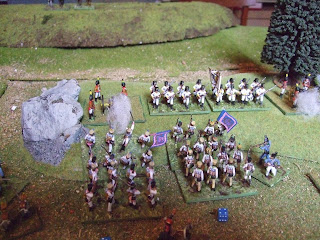 On the right D’Aquino is finally moving (if slowly) but the presence of an Austrian Dragoon regiment forces his right-hand unit to form square. 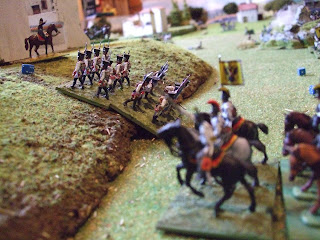 D’Aquino’s remaining units press home their attack and force the enemy to retreat. 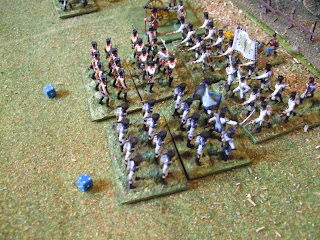 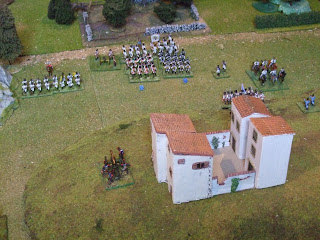 In the centre Pignatelli’s division fail in their attack and fall back but The Velites take Casone and the Guard Voltiguers force back their opponents. 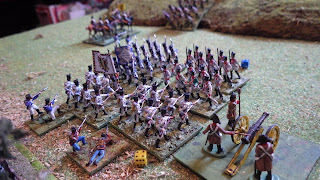 The Light cavalry fails to take the Austrians unawares and are sent packing (rear of photo). 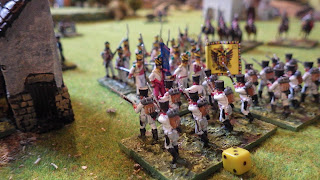 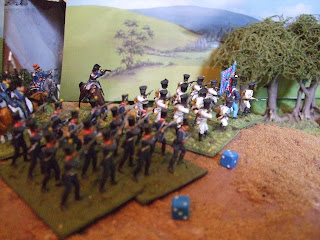 The Tuscany Dragoon Regiment presses home its attack on the square but are defeated: 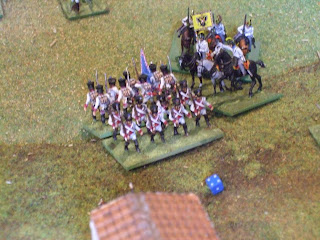 Along the whole front the action degenerates into desultory skirmishing.

Murat cranks up the pressure and the Austrian right disintegrates under the attacks of the Royal Guard and suffering (in game terms) permanent disorder- the remnants flee towards Tolentino. 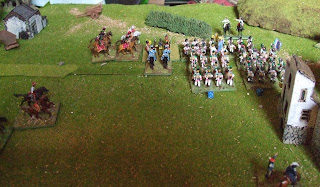 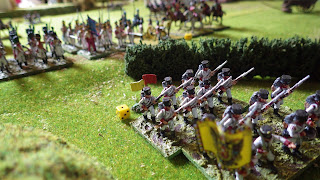 In the centre however Pignatelli’s men stay put, out of range and on the right D’Aquino’s attack grinds to a halt as his men will not close with the Austrians. 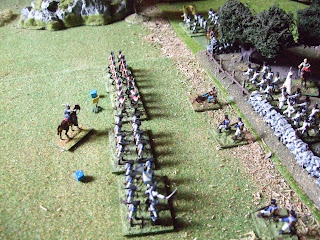 (The skirmishers in blue coats are the Duchy of Modena Regiment)

The Guard cavalry catch and destroy the units fleeing to Tolentino.

D’Aquino’s troops finally come to blows with their opponents on the Austrian right and cut it to pieces. 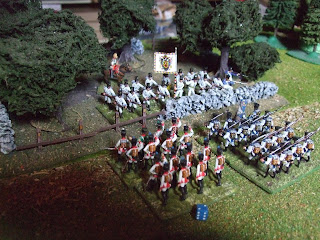 It is at this point that, from an Austrian perspective, I become aware of the enormity of the error in commiting the Dragoons to attack a fresh unit of troops in square as they are unable to take advantage of the successful but damaged and disordered units of D’Aquino’s division, who now rally undisturbed.

Pignatelli’s troops in the centre advance cautiously and the Austrians retire to their final defensive line while their light infantry maintain a harassing fire across the line. 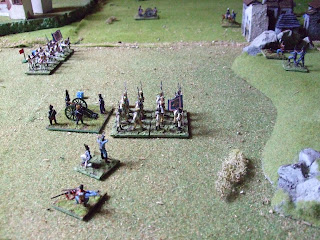 Well, Napoleon said you should never underestimate the Austrians. This turn they fought like cornered rats and threw back the Royal Guard, destroying the Voltiguers and their Light Infantry did enough damage to Pignatelli’s troops for the division to count as exhausted (in Volley & Bayonet terms this basically prevents them from taking any further offensive action – it doesn’t happen very often!) 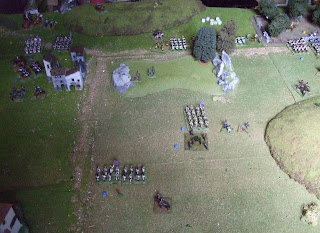 Both sides consolidate their positions and there is little action.

The Flanking move finally materialises and attacks Castella Del Rancia and the Neapolitan reinforcements arrive at last - once again things are looking pretty dicey for the Austrians. 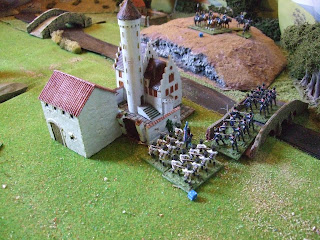 D’ Aquino gets a lucky roll and his depleted troops launch an attack on the Austrian left, forcing them back  and the Guard Artillery cause another points worth of casualties. Bianchi now has a total of 4 points of infantry and one artillery battery remaining (plus 4 skirmishers). 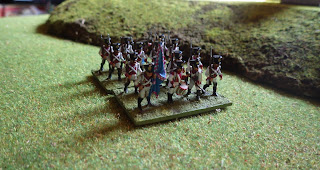 The Neapolitans are also pretty battered with 2 divisions now at exhaustion point and unable to attack. However Murat has fresh troops arriving and Lecchi’s flanking force is now also in play it has to be said that only the Neapolitans are in a position to carry on so I must award victory to Murat. To be honest it is hard to see how he lost the historic battle (even he could hardly believe it).

I think in a wargame, even if you give one side a handicap it is rarely sufficient to overcome a significant numerical superiority. On balance it could be said that the Austrians were lucky to win in 1815 and in 2015 they just weren’t...