Battle of Bagradas River (Tunis) 255 BC

This game was played on 11th June and is the most recent of those that we have played during the period Nov '16–June '17 when I lost my 'urge' to blog. We used Zimmermann's "The Wargamer's Handbook", that old set that I have enjoyed using since Mark introduced them to me a couple of years ago. We have now compiled the rules for ancients into a document and set of tables that we can refer to (both of documents are works 'in progress').

Mark put together the game largely based on the scenario in the Warhammer Ancient Battles supplement Hannibal and the Punic Wars. and with reference to Patrick Waterson's palindromic-titled article Amazed I Am Ere I Made Zama from The Slingshot no. 262 (2009), He also supplied the troops, table (and venue), as he so often does!

I took the bait and played as Roman...

Nah, actually it is good taking the side that was trounced historically as you can only do better, or else it goes according to the 'script', so fair enough. Either way you cannot lose, surely?!!

The forces were arrayed on opposite sides of the open plain.

Regulus' 15 000 infantry formed the large centre, deployed in the usual four lines: velites, hastati, principes and triarii with his 500 cavalry split between the flanks. 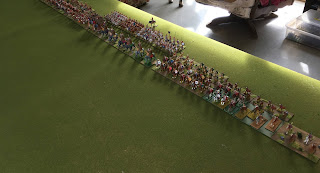 Xanthippus had 12 000 infantry, 4 000 cavalry and 100 war elephants. He placed the Carthaginian spearmen in the centre, mercenary infantry on the right with light infantry and Carthaginian/Numidian cavalry split between the two flanks. Those 100 war elephants formed the front rank of his centre. 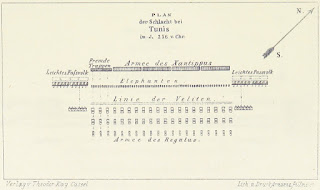 This was according to the historical record (map from Wikimedia Commons). 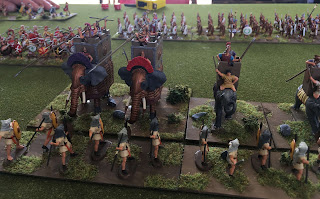 As were the opening moves: bring on the pachyderms!
Elephants are from Zvezda (left) and Hät (right) War Elephants sets. Velites by Hät. 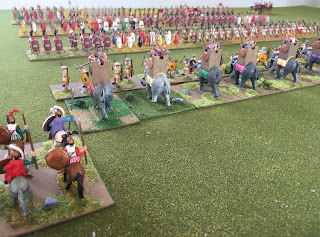 The velites evaded, leaving the hastati to try to stop the crazy grey beasts. 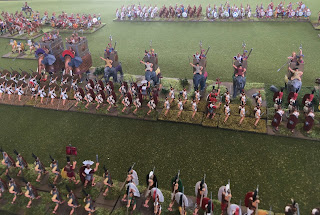 They passed the panic test, but were no match for the lunging Loxodontini...
(Roman figures mainly from Hät, some from Zvezda at right of photo). 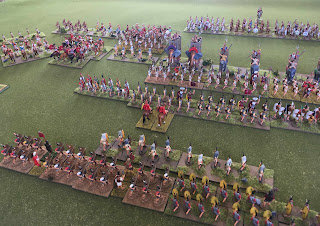 who pursued through to the principes. 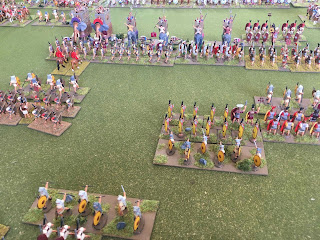 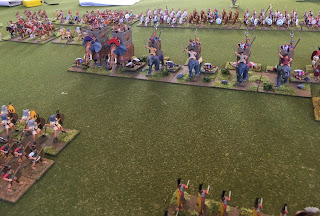 mayhem for the Romans! 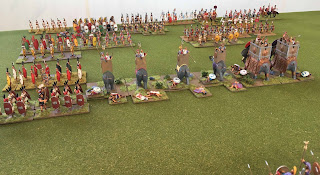 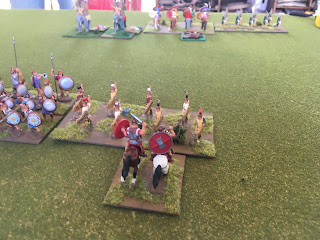 Regulus sent his cavalry in a 'death or glory' charge in an attempt to break up the Carthaginian attacks on both flanks. On the right, they were at first successful against the Carthaginian cav. (in distance), but pursuing onto the light infantry came unstuck. 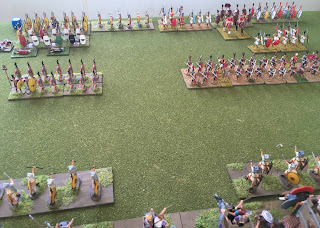 Taking stock after the initial shock of the elephants, the Roman line reformed, but would it hold? 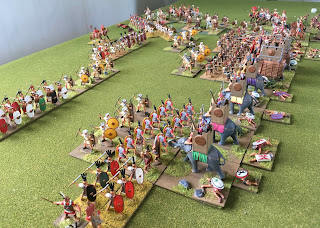 The best form of defence is attack! Desperate Roman counter-attacks, but are they merely delaying the inevitable? 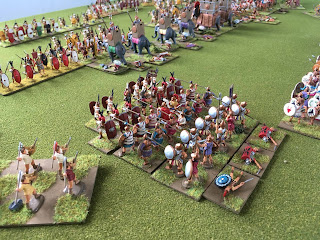 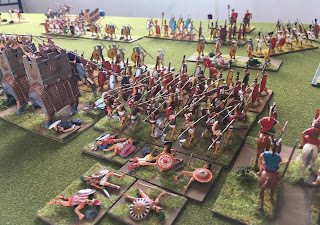 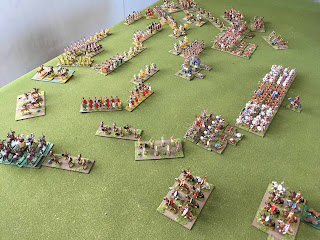 Not much sign of the Roman lines in this broad view of the battle. 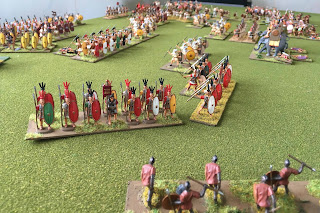 On the Roman right the triarii have driven back the cavalry and skirmishers-—for now. 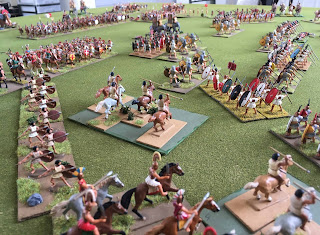 The Roman left was under great pressure from a hail of javelins delivered by Numidian cavalry and skirmishers.
(The keen-eyed will notice the Atlantic figures in the foreground amongst those from Hät and Zvezda).

The pressured Roman army looks like a hollow square, assaulted from the left... 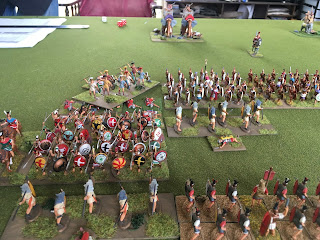 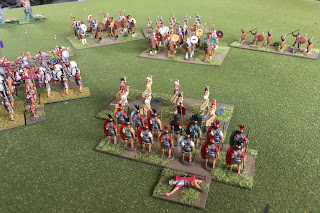 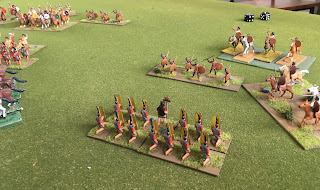 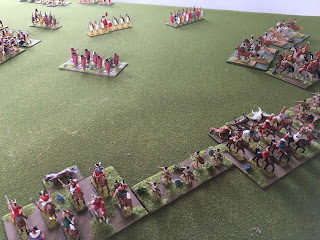 Brief respite. A successful counter-charge by the left-most hastati and principes, drove off Carthaginian cavalry, taking many of their fellows with them. 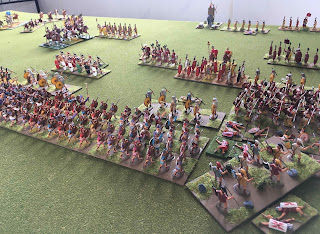 In the centre though, the Carthaginian phalanx ground forward.

The battle had reached its climax, with what was to be a last turn of desperate mêlées. 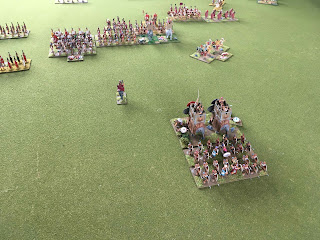 Aiming for the triarii to their front (seen just at left of photo), an uncontrolled elephant charge steamed into the rear of the right-most Carthaginian spearmen, sending them to the rear (foreground of photo), before crashing into the spearmen's former opponents on the left of the Roman line! 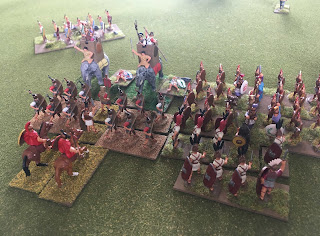 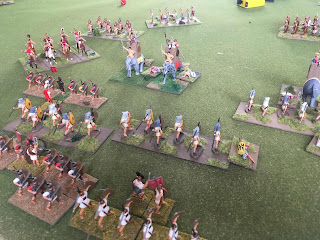 Successful against their 'revised' foe, they continued towards the messed-up Roman rear; messing it up all over again. 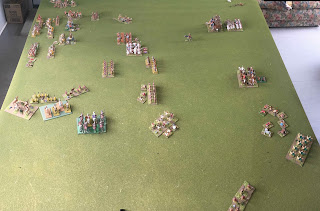 So, what at first seemed to be 'disaster', then turned triumph—combined with the successful attacks of the Carthaginian spearmen—meant that it was curtains for the Romans. 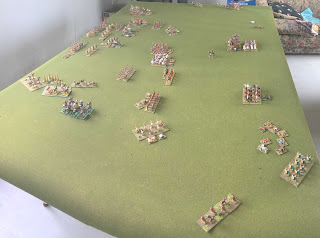 A victory to Carthage, but in this we did not completely follow the history. Our version was far closer with only 20-odd figures difference in 'casualties': 121 v 100.

This was a fast-moving, challenging game. Being Roman, I was always trying to regain order and put ad-hoc formations into some kind of attack formation. As Carthaginian, Mark kept me on the back foot all game, trying to get his troops into contact as fast as possible.

Since changing to Zimmermann for our games of ancients (this was our third game using these rules) I have been far happier with the 'feel' of the games as well as specific mechanics. This was the first time that we have used elephants and those rules seemed to work well, including having them pursue automatically (our addition to the rules) and going 'awry' (as per original rules).
Posted by James Fisher at 09:16