Unknowingly, I have followed the course of John at "The Nameless Blog" who posted back in March that he had recently completed the Waterloo Farmhouse by Sarissa Precision—and a fine job he made of it too.

I thought at the time that it looked a lot like the sets of MDF kits that I had purchased from Italeri in late 2015 under the 'Waterloo 200' banner (Waterloo 200 Battle at La Haye Sainte, La Haye Sainte Stables and La Haye Sainte Barn). It would and should though, wouldn't it, being a model of the same thing?

Fast forward to the weekend and I decided, when yet again moving the boxes to get to something else, that it was time to get on and make the d@mned things! It was then, looking at the instructions, that I saw the co-branding of Sarissa Precision and realised that they *were* the same thing!

I completely concur with John's comments. These are fast, fun buildings to construct. The instructions are clear, the pieces snap out easily, fit together really well (and easily), using PVA glue. The trickiest part for me was the bit that I decided to do first, the dormer windows on the farmhouse.

While not yet painted, I think you'll agree that it looks impressive nonetheless. You'll see what the finished thing can look like by looking at John's painted model on his blog. 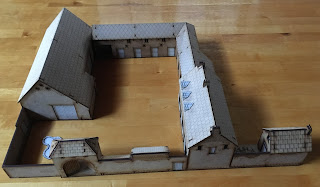 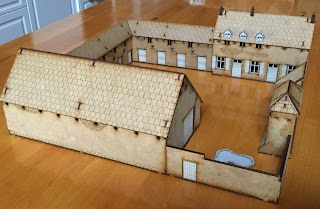 They even provide a card version of the pond, in two sections. 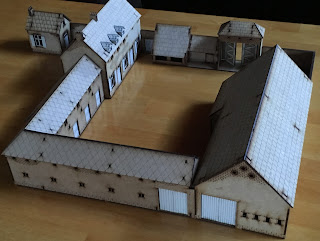 The buildings are a mixture of MDF (the majority) and card (for smaller gates, gate backing, window-sills, dormer windows and pond). 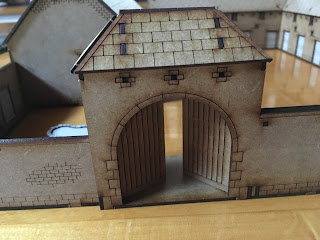 The gates of the main entrance have simple pin inserts into pre-cut holes, so are able to open. 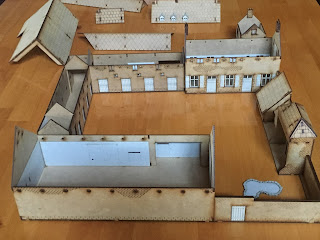 It fits together so well that I was able to leave the rooves un-glued to enable troops to be put inside, if desired (and to aid with painting).


Completing this (construction, at least) has me thinking of an exciting and appropriate game for our 100th (we recently completed no. 97)—the central section of the Battle of Waterloo, from Hougoumont to the 'western' half of the Anglo-Allied ridge. I reckon that we could take in an area of about 2.5 km x 2.5 km at a ground scale of 1 cm to 1 m and figure scale of 1:20. My grandiose idea would be to make it of the entire battle, with forces entering either by player command or according to historical events (especially the Prussians). The more practical version is to focus purely on troops that were in that area from around 14:30 onwards. This would make for a semi-recreation, with options and outcomes determined by the players. I'll discuss it with the other fellas and we'll see.

A plan in the development, let's say!
Posted by James Fisher at 20:28