If you don’t own it, get a copy

Book Review: Napoleon: The Last Campaigns 1813-15, by James Lawford
I still have quite a few reviews of books about the 1812 campaign to finish and to post, but, since we are well into the bicentennial of 1813 and rapidly approaching the anniversary of Lützen, I’d like to present reviews of some of the books that we are using in preparing our bicentennial activities for ‘Napoleon’s Last Campaign in Germany’ (apologies to Petre there).
There is no better place to start, perhaps with the exception of Petre’s classic, than with the late James Lawford’s Napoleon: The Last Campaigns 1813-15. First published in 1977, this book is a perfect way to begin your reading for the 2013–15 bicentennial of Napoleon’s Last Campaigns. 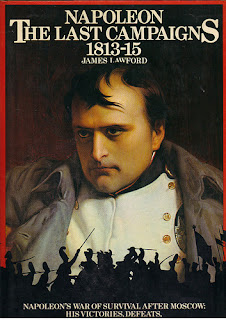 I first read this book in the early 1980s, borrowing it from the library of the university that I was attending at the time. I was most impressed with the text, the presentation and it was one that really stuck in my mind, so it was an obvious book to purchase now that such publications are so easily available, and reasonably priced, through on-line vendors.
My memory had not tricked me. This is still an excellent book! It is a fine introduction to the campaigns of 1813, 1814 and 1815, but is also so much more. Lawford does a magnificent job of tying the campaigns together, prefaced by the end of the 1812 campaign. HIs prose is easy to read, detailed and engrossing. Importantly, while making an assessment of the performance of Napoleon, his marshals and generals, and of the allies, such assessments are free from the value-laden comments that so often beset books about this period.
The maps are perfect to aide the reader and for wargamers. They have sufficient detail to show the key parts of the battlefield and campaign area. Arrows clearly show the movements of troops and compliment the text perfectly. The strength of forces involved (down to corps level) is also provided on, with or near the maps.
There are also plenty of “pretty pictures” in the book with reproductions of paintings of battle scenes, commanders and troops. These are mainly in black and white, but are clearly reproduced. And yes JJ, Jean-Louis-Ernest Meissonier’s famous painting is correctly attributed to the Campaign in France! Here is where the only mistake that I found with the book occurs; a painting of a French officer of the chevau-léger lanciers is incorrectly captioned as a captain of dragoons (although of course, given that is where those regiments derived, perhaps it is not incorrect?!).
My recommendation regarding this book is simple: if you don’t own a copy, get one, be it by purchase or borrowing through your library service.

(This is belated report is of a game, played on 20th January this year, at the ANF ‘Annex B’)


On this day the Spanish all had a bit of the funky cold Medina, so it would seem...


After our little sojourn of Warhammer Ancients and Ranger!, we got back into the saddle and the “real stuff” courtesy of another of the fine scenarios from Chris Leach’s “Fields of Glory”. As with Medellin, we still had only two of the three amigos present and once again used ANF ‘Annex B’ (aka chez moi), so a small Peninsular battle was in order. Our selection of Medina del Rio Seco turned out to be a real cliff-hanger to the end and, by chance, I picked a good day to take the Spanish.

During our game of Medellin, Mark had remarked that “you need a bit of luck in any game, but particularly when commanding the Spanish”. Fortunately I had more than a bit when it came to taking the reins to try to carry out Cuesta’s “cunning plan”.

Chris Leach’s notes for the scenario describe it beautifully. “Blake’s divisions (Maceda and Cagigal) were isolated from the rest of the Spanish forces further to the rear. Cuesta did this deliberately so as to expose Blake to heavy fighting to be saved only by Cuesta’s triumphant arrival.” Most wargamers would likely consider this folly on Cuesta’s part but I, having now “been there”, realise the true genius of this much-maligned general!

A look at the starting positions shows the extent of the cunning in Cuesta’s plan.


The armies made their initial moves, following a light bombardment—due to the small numbers of guns present (three French foot batteries and two Spanish foot batteries). ‘Blake’ ordered Portago (who sounds like a character from a Shakespearian tragedy) to move up on Maceda’s left so as to close the gap in the Spanish line. ‘Victor’ had other ideas. He ordered his entire army to attack. Verdier and Merle drove straight at the Spanish on the ridge (Cagigal and Maceda), while Mouton attacked Portago’s isolated division and Lasalle’s cavalry moved around Maceda’s left flank. 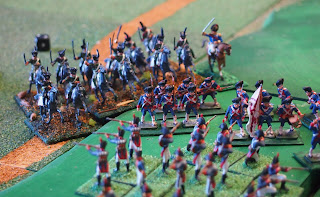 Maceda’s division failed morale at 1/3 strength, giving a retreat result. This meant that Cuesta would come to the rescue in Turn 3.
So, Cuesta’s division entered the battlefield and moved to support Portago against Mouton’s attack. They were not required immediately as the square of Portago’s Principe Infantry Regiment saw off Mouton's provisional chasseurs (just), but the line of the Toledo infantry regiment was broken by Mouton's 4th légère.
Meanwhile on the central ridge line Cagigal’s men delivered a series of devastating volleys (four 6s in a row!) against the attacking French units from Merle’s and Verdier’s divisions.
Turn 4 saw more effective defensive fire from the Spanish troops all along the line.
By Turn 5 they were veritably "on fire" with their firing! Merle’s units, however, were unphased by the firing at their end of the line and the resulting mêlées between these units and those of Cagigal lead to one win each.
Cagigal's hussars emerged from the orchard to threaten Merle's left flank.
The casualties caught up with Mouton's division which was demoralised.
Turn 6 produced better results for the French in the mêlées. The hussar's from Cagigal’s division tried to charge the square of Merle's infantry but were broken and one of Cagigal's infantry battalions was broken by Merle's attacking infantry, leaving Cagigal’s division demoralised.
There was also some good news for the Spanish as Maceda’s men rallied.
Turn 7—this was a big turn!
Cagigal's division lost two more units this turn, tested morale and broke. Portago's men broke another unit from Mouton's division which passed the crucial divisional morale test at 1/2 strength.
Lasalle sent his 10eme chasseur regiment against Portago's infantry. They broke the first square of the 1st Aragon (rated 'second rate') and then took the breakthrough and broke the 2nd Aragon (also 'second rate') which was still in line. Portago' division failed divisional morale at 1/3 losses and retreated.

The battle remained on a knife edge!


Turn 8. Mouton’s provisional chasseurs came back into the line of battle and charged towards Portago's retreating troops. However the Spanish division rallied in time to face the chasseurs (in Turn 9).

Mouton’s provisional chasseurs completed their charge into Portago's now rallied units, while being fired on from the Cordonga Regiment of Cuesta’s division. The chasseurs, surely the unluckiest unit on the board, broke. This was sufficient to break Mouton's division!


The game was still in the balance in Turn 10 which was a turn of repositioning by both sides.
Turn 11, the penultimate saw the ‘stupendous’ 10eme chasseurs charge again, this time dispersing the Voluntarios de Cataluña and guns from Maceda's division which was then demoralised.
Another battalion of Cuesta's Volunteers of Leon ('second rate') was broken by artillery fire, but his division passed morale at 1/3 losses.
Turn 12, the last turn, had two parallel realities.
Version 1
Taunted by his Spanish adversary, 'Victor' goes for victory. Verdier's light infantry form column and charge Cuesta's infantry on the ridge. This unit delivers a devastating volley, stopping the French in their tracks. Joining in the quest for victory, Lasalle sends the 22eme chasseurs to charge Cuesta's infantry on the plain. The latter form square, the chasseurs are broken. Lasalle's cavalry fail their divisional, broken. It's a Spanish 'limited victory'!
Version 2
The French are not so bold. Verdier's lead troops move up and fire ineffectively on Cuesta's infantry on the ridge. Lasalle's 22eme chasseurs hold the right flank. The game is a draw.
It was a great game, whichever version we accept as the 'reality'.

It was particularly pleasing to have the Spanish do so well, thanks to Cuesta, the real one, and his 'cunning plan'... and some good dice rolls for firing by the player one!