A fitting introduction to this famous regiment

(DVD cover art courtesy of the publishers. Please do not reproduce without first seeking permission)

This DVD is part of the Peninsular Collection by the team from Battlefield History TV (BHTV). We have reviewed two DVDs from this group previously: Part 3 of the Waterloo Series and Salamanca. They are getting better and better with each new title so that this is, undoubtedly, the best of the three that we have seen thus far. 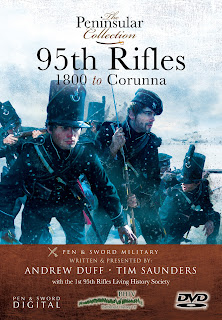 The DVD uses the same, familiar approach as others from BHTV incorporating narrative from Duff and Saunders as “talking heads”, often in location, interviews with 'chaps' in the regimental museum, plenty of re-enactors (sorry, living historians) and cut aways to maps and reproductions of paintings to illustrate specific actions of the campaigns. While at times these DVDs can appear somewhat ‘home made’, it was rammed home to me just how superior the content is compared with the more “glitzy” and superficial productions that grace commercial and ‘cable’ television when I saw one of the latter after viewing this one.

This title, the first of three regarding the history of this famous regiment, begins with the creation of light infantry units in the British army, during the French and Indian War and American War of Independence. The Experimental Rifle Corps was initially formed from light troops of various regiments, with each man dressed in the red uniform of his parent unit. It became the Rifle Corps in 1800 and at this point adopted the famous green uniform (which often faded in sun and rain to a green-brown). The regiment was present with other light troops at Shorncliffe. In January 1803 it was allocated the number 95, becoming the 95th (Rifle) Regiment. A 2nd battalion formed after end of Peace of Amiens in 1804.

Duff and Saunders, ably assisted by staff from the regimental museum and re-enactors, describe the early actions of the regiment including the landing near Ferrol, the provision of sharpshooters for Baltic fleet during the Battle of Copenhagen and as part of the infantry contingent in the British expedition to seize the Danish fleet at port in Copenhagen (second Battle of Copenhagen). It is the retreat to Coruña though, an episode that placed the 95th in the annuals of the most respected regiments in the British army, on which most of this DVD focusses.

The retreat* is a presented as a vivid, “warts and all” description, including the successful rearguard actions, extreme hardship of a retreat in winter and examples of ill-discipline and pillage by the British army. Throughout the retreat, which was one of the finest ‘hours’ of this famous regiment, the actions of the 95th are recounted and juxtaposed to the ill-discipline of much of the rest of the army.
[* Amusingly Saunders verbally ‘stumbles’ on several occasions, referring to the manoeuvre as a ‘retirement’, only to correct himself and correctly call it a retreat!]

No doubt the pursuing French army did not have a much better time of it, in the same manner as the Russian army in the pursuit after Moscow, but this is barely mentioned here; understandably though, given the subject matter.

A highlight of the DVD is that the footage was taken on location and at the same time of year as the historical events. This adds greatly to the value of the presentation—particularly with regard to the retreat to Coruña.

While lauding the 95th, the narrative is generally reasonably neutral, with a few notable exceptions. One such is the statement that Napoleon left the pursuit to Soult as there was “little glory for him”. This conveniently omits the fact that the former needed to react to ‘rumblings’ in central Europe where Austria was preparing to once again declare war on France. Perhaps the most unfortunate and surprising mistake is the repetition of the error in the description of the tactics used by the two sides in the Peninsular, which dates back to Oman, viz. French ‘columns’ vs British ‘line’. The last of my ‘niggles’ with the DVD is the use of trumpet calls in the transition between sections, a feature that becomes more than just a little annoying.

A feature of this DVD, as with others by BHTV, is the participation of re-enactors; in this case the 1st 95th Rifles Living History Society. These enthusiasts display their wonderful uniforms, illustrating specific parts of kit and actions. When required, most of them manage to play the part of ‘living wallpaper’ well, although at times some of the younger members standing beside a narrator look less than enthused.

All in all this is a fine DVD and a fitting introduction to the history of this famous regiment, particularly as it covers a little-known and oft omitted part of its story; the early years.
Posted by James Fisher at 22:27