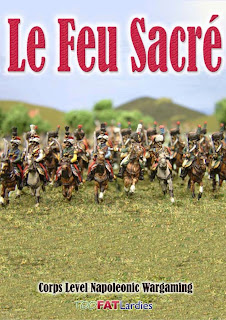 Le Feu Sacré rules from Too Fat Lardies (or LFS as the author’s prefer to refer to them) were written due to the authors’ frustration with available rules at the time; i.e. the ‘usual’ reason. Le Feu Sacré is, at heart, an Empire ‘successor’ set.

Empire, Scotty Bowden & Charlie Talbox’s rules for Napoleonic wargaming, were a revolutionary set that dragged rules for Napoleonic wargaming from the 'realistic', small scale, two-minutes or so a turn, I go you go rules of the 60s and 70s to more stylised games—which they dubbed a simulation—with brigades or divisions as the unit of most operations, enabling the big Napoleonic battles to be re-enacted on a tabletop. If you have not seen them, ‘do yourself a favour’, grab a copy and read them, or see the excellent review at the Miniatures website. Perhaps even play a game or two. You’ll soon see elements that subsequent rule-sets have adopted or adapted—Napoleon's Battles, Republic to Empire, Shako, the DBx 'stable' and De Bonaparte à Napoleon, to name but a few. You’ll also see why few people play Empire today1!


[1Interestingly Emperors Press have recently released a new version of the rules called Revolution & Empire. I’ve not seen them but, from the limited information on their website, they seem to be equivalent to Empire VI. I’d be interested if anyone has seen, read or, preferably, played a game with them.]
The brilliant aspects of Empire were its insistence that units adhere to higher order formations, restrictive orders and 'coherence' (morale) related to those formations, the introduction of artillery bombardment as a phase and the concept of grand tactical movement. These aspects did away with wargaming 'staples' of the tens or more approach moves, at about two-minutes each, during which units or sub-units freely went in any and all directions with plenty of "if your troops do that mine will do this"! They also moved from the concept of casualties as losses of men to a loss of effectiveness. Trouble was that the elegance of the grand tactical and orders system was not repeated once units came into 'contact' so that games slowed down and scale was lost as players manoeuvred individual battalions and even companies of lights and grenadiers and worked through long, detailed tests. Unfortunately they also did not know when to stop so that, while Empire III was probably the definitive set, they continued until version five, merely adding more complexity and fiddly often stupid rules that should have been optional rules at best (DUB cavalry anyone?!). All this gave even the most devoted player a headache and the sense that cashing in was the chief aim.