As everyone knows, the Mercenary War was all the fault of two wicked former Roman veterans, Spendius the former Campanian slave, and Mathos the Libyan soldier who didn't know what was good for him. We won at Utica but somehow they escaped. Well, that's what I was taught at school in Carthage, anyway, and so our source equally claimed. Mark did his usual excellent job on balancing the forces for the scenario for Impetus 1, and as the armies deployed the scene looked like this from the eye of the vulture already circling above. 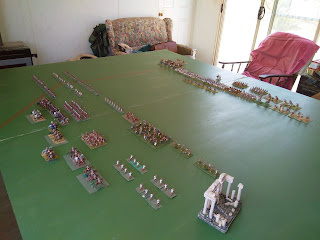 The Mercenary forces are nearest, with not all the Carthaginians yet visible - in particular, you cannot yet see their formidable elephants. I was in charge of the Mercenaries, and I decided on a miniature Cannae plan - hold back my few heavy infantry and medium cavalry, whilst throwing forward the javelin-armed skirmishers, the Numidian light cavalry and the Celtic warband in the hope of destroying the elephants, and make the Carthaginians pay for every step forward they took. For Hanno's plan I would have to wait...

The evidence of my strategy can be clearly seen in the following photo from Move 2: 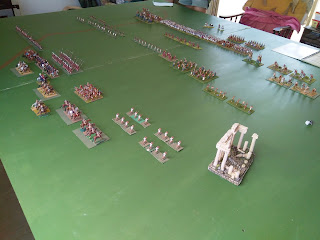 And the elephants did not have it all their own way, as the clash the following move on the right demonstrated. They don't like them up 'em, those elephants. Still, there were the Carthaginian's own light cavalry to deal with yet. 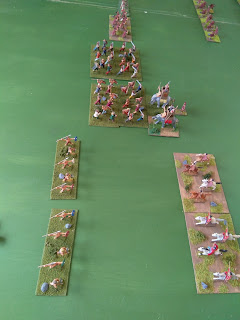 ..even if matters were proceeding with equal alacrity and some success on the left flank. One dare not even think about those massed, and beautifully painted (by Mark) Carthaginian citizen regulars. 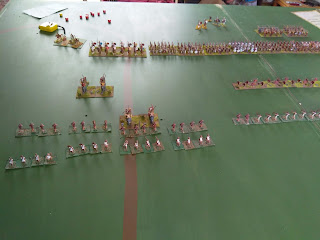 Go the Celtic Warband! At last, something of an opportunity for the big double units to make a dent in the Carthaginian heavy infantry. A flank attack was irresistible, but the inevitable result was an attack in turn by the Carthaginian light cavalry, and the unedifying but sadly predictable sight of fleeing Gauls. 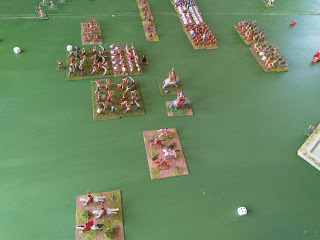 What is left of the Celtic Warband is still making trouble the following Move, 4, but the Hands of God are stayed, Man must make his own destiny. 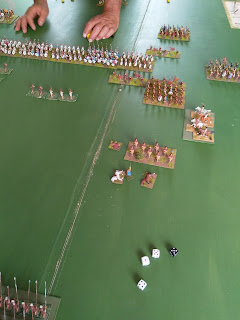 A view of the overall position on Move 6, Mercenaries to the left of the picture. Auxiliary troops are beginning to thin out a bit, and there are no elephants to be seen, but some Libyan hard-core renegades, and a single line of hoplites, seemed woefully inadequate to deal with the threat of the massed Carthaginian line, and rebel losses were mounting. It looked like 'history' was about to repeat itself, as the shadows of evening began to fall across the battlefield and its weary soldiers. 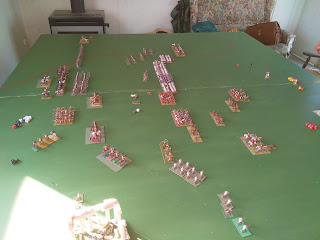 Normally Impetus games of this size run for about 6-8 turns, but my strategy of refusing the centre almost inevitably meant that after six moves, only the auxiliary troops had been heavily involved. Gradually, however, the main forces tipped into the fray, starting with the Carthaginian cavalry themselves, sweeping away skirmishers and plunging forward towards their Greek foes. Here, God singles out the one who is to die. 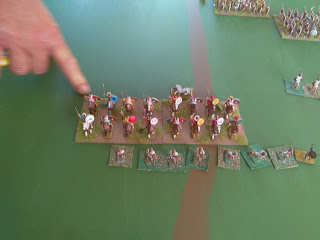 whilst here, in this overall view of Move 8, God contemplates the carnage He has created. The extent to which the Carthaginian left had been pierced can be clearly seen in this picture. 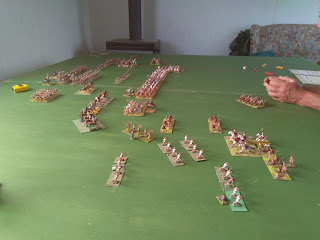 The awful reckoning could not long now be delayed, however, and on Move 9, the Carthaginian heavy infantry launched their long-awaited assault on the rebel lines. Here they are about to do so: 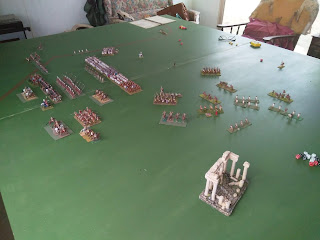 It went well, with the Libyans thrown back, narrowly averting a complete disaster by pulling back their cavalry just in time (note to myself: do not station cavalry too close to infantry lines).

But then a worried, and then a very worried, look crossed Hanno's brow: his losses had been steadily mounting, especially among relatively high-value units including infantry, and as Move 10 arrived, and the casualties mounted, the awful truth became evident: the Carthaginian army had gone beyond its break point, and the battle was over. Too many javelins thrown by too many Numidians to deal with, was the truth of the matter. 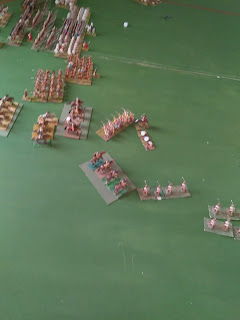 In real time, we had started about 11am and finished around 6pm, which we thought was extremely reasonable. Luck had swung back and forth, as it usually does, but the Mercenary plan had more or less held together, and had turned out better than Hanno's, which I extracted from him during his crucifixion - just attack.

Then we turned to the online sources, and found that we had understood things awry. In fact, this battle had been won by the Mercenaries after all. I must say, it was extremely pleasing that we had ended up recreating more or less the historical result despite thinking it had actually gone the other way. Impetus held up well, despite its sometimes cranky mechanics, and provided a lively, to-and-fro game with the result in doubt until the last moment. This won't be the last such encounter, Rome can rest assured of that...
Posted by Julian Roche at 22:06 6 comments:

Many of you will already have seen it, but if not, I commend you to seek out Chris Gregg's  Not just old school wargaming blog to read the reports of their superb game of Quatre Bras. 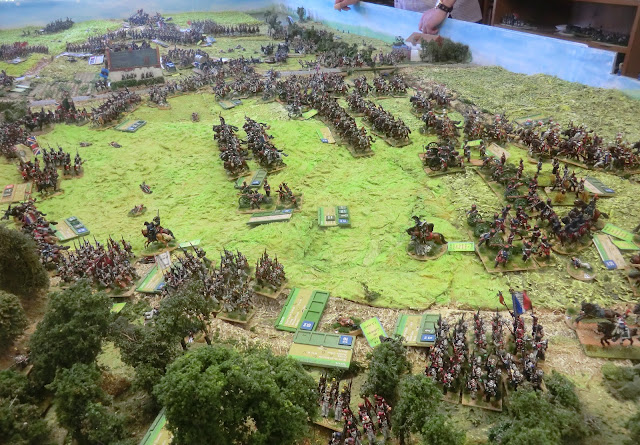 Whether you head to his blog directly or get there via the bicentennial blog Wargaming Waterloo 2015, dysaf!
Posted by James Fisher at 20:57 5 comments:

Julian was dead keen that we do Jena.

I have to admit that I was less so as it was 'out of sync' with my own 'cunning plans'—I can be terribly inflexible at times!

Anyway, Julian prevailed and I'm so pleased that he did. It was a great game that we played out over two 'sessions'; 9th & 11th December 2017.
(I eventually got on board and produced orders of battle and scenario rules/victory conditions.) 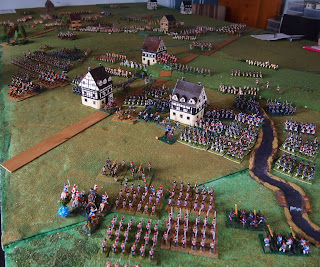 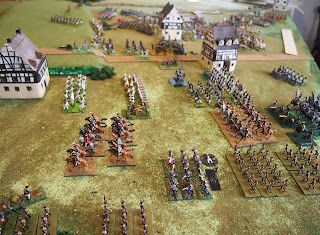 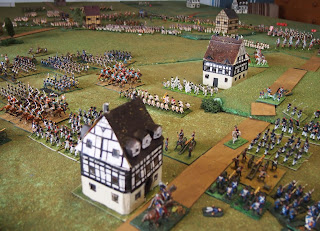 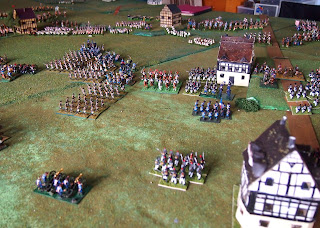 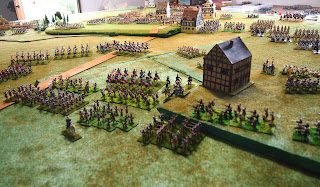 Holtzendorff’s defence
Following in the spirit of the dogged defence of the Dornberg by Tauentzien’s division, Holtzendorff’s remaining troops denied St Hilaire's and Guyot's (Soult’s IV Corps) attacks around Lehesten and Rödigen for three more turns, even staging a couple of significant counter-attacks. This was not aided by my poor management of the troops, getting stuck behind the front-line and so not moving around the north to get into the flank of the retreated Tauentzien until the 14:30 turn, after they had rallied. 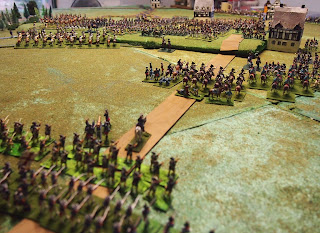 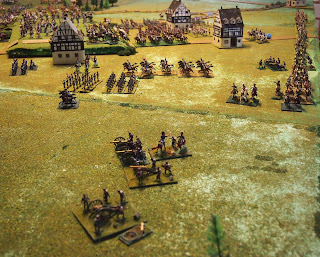 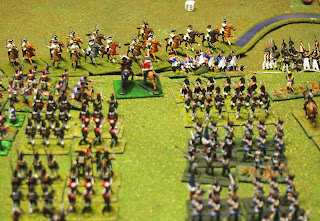 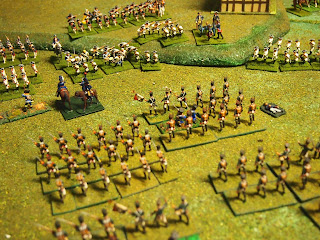 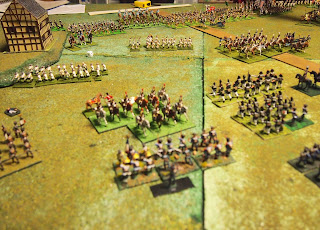 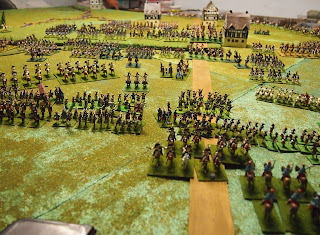 By 15:00 (end of the 13th or 14:30 turn) the Saxo-Prussians controlled Prittwitz to the east of Viesehnheiligen, Grawert was defending the hill around and west of that town, Niesemeuschel to his right and Rüchel had newly arrived from the west (around Kotschau). These Saxo-Prussian commands were largely full strength.

St Hilaire was bearing down on the flank of Prittwitz, but his division was strung out due to Holtzendorff’s commendable defence. Lannes’ divisions were debouching from the Dornberg to attack Prittwitz from the front, supported by Ney’s small infantry and cavalry division and d’Hautpoul’s cuirassiers (and Guard on the ridge). To their left, Heudelet’s division (Augereau) was advancing towards a nasty combination of Grawert and Niesemeuschel. The French commands had taken casualties, but had lost few units.

We then looked at the victory points that I had put into the scenario.

That made 176 victory points for Saxo-Prussians and 140 for the French, a difference of 36 in favour of the Saxo-Prussians, so a Draw as the result. We therefore called the game a Saxo-Prussian scenario victory.

This result was fitting, given the far better performance of the Saxo-Prussians than their historical counterparts.

Had it continued for the further two turns scheduled in the scenario or even for a further four turns that could be expected given the time to dark, I reckon that it would have become, at best and on balance, a hard-fought French minor victory. Nothing like the historical smashing victory of history!
Posted by James Fisher at 12:21 19 comments: