Lützen: first game for the 1813 bicentennial

Our first game in this bicentennial of the 1813 Campaign will be a re-fight of the Battle of Lützen (2nd May 1813), which we hope to set up next month to commence in June.

It's a gentle lead-in to Leipzig with a mere 110 000–120 000 French-Allied troops and around 80 000 Russo-Prussians. I have just completed the army lists (editing those for Leipzig) and scenario document. The numbers that we will use are:


It should be an intriguing and challenging game for both sides. 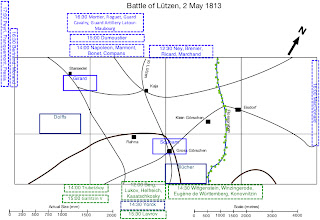 Lützen was an encounter battle with Ney's advanced elements (Souham and Girard) initially surprised. Reinforcements steadily came in on both sides so that the villages in the 'quadrilateral' changed hands several times. In the end French-Allied superior command and weight of numbers produced a minor victory that could not be exploited for the lack of cavalry.

The wargame is likely to be a close-fought thing too (hopefully) with the initial Allied attack, French-Allied reinforcements counter-attacking to stabilise the situation, then the bulk of the Allied army countering the counter-attack and finally the advance of the guard and Napoleon's attempted double-envelopment with Bertrand and MacDonald. Will the smaller Allied army, much of it top quality, change history or will the French-Allies be able to do better than their historical counter-parts?


Quite a number of other wargamers and groups have done scenarios of Lützen and they have produced some interesting counter-factual results. There are links to reports of these games on the Wargaming Waterloo 2015 blog. We'll see out how we get on in a couple of months.

An aspect that I found particularly intriguing while designing the scenario was that of the Flossgraben.

Many scenarios of Lützen feature a river flowing from the north, to the east of Lützen, towards Kaja, bending near that town, flowing around Klein Görschen and then south off the board. I wondered for some time what it was as it features on some maps but not others. I finally found a map that had it named and realised that it is the Elsterfloßgraben (Elster float canal). The Flossgraben is “a canal in Saxony and Saxony-Anhalt, built in the 16th century for the transport of wood, branching off from the Weisse Elster River” (Wikimedia Commons, http://commons.wikimedia.org/wiki/Category:Elsterfloßgraben). The photos in Plate 1 and 2 indicate that it is not a serious water obstacle and, if it is to be on the battlefield at all, should be represented merely by a line of trees and bushes (as mentioned in Hofschröer and Hook 2001).


I concluded that we'd depict the Flossgraben as a double-line of trees. It will be passable to all arms at 1/4 of normal movement rate. Units will be disordered (‘staggered’ in Shako terms) whilst crossing (unless via a bridge). As with woods, the Flossgraben blocks line of sight on the same contour.

I'd be interested in any comments or other points of view on this.


Cited and consulted for the scenario

Pardo, R (2007) Scenario 32.1: The Battle of Lutzeniki 2nd of May 1813. http://www.rafaelpardoalmudi.com/scenarios/lutzen/Battle_of_Lutzen.pdf

I have completed our OBs for Leipzig. There are over 11 200 reasons** why it is gonna be a big challenge and a great sense of achievement when we finally make it happen.

If you’d like to look over the army lists, they are on Google drive;
French-Allied Army list
Allied Army list
I created the lists using a figure scale of approximately 50:1. Units of infantry, cavalry and artillery were determined from available orders of battle (principally from Pigeard, Nafziger, with reference to Millar when necessary) based on a conversion of approximately 1 200 soldiers present for Austrian line infantry regiments and 800–900 soldiers present for all other Austrian infantry and those of the other nations. A conversion of approximately 600 troopers per cavalry unit was used. Artillery batteries were included at the rate of one battery for approximately 20 guns for the Russians and one battery for approximately 16 guns for all other nations. Wherever possible the wargaming units have been allocated names based on the units that were present. Combined/composite unit names have been used if the actual units were at low strength and 1st, 2nd, etc. battalions for larger units.
I went through the list fairly carefully, but there may be typos or errors. I’d be happy to hear about any that you find so that I may correct them!

This is the first in a new series of posts in which we want to present examples of painted figures from various 1/72nd scale sets. Whenever possible we will attempt to feature an assortment of uniforms and even painting styles from our combined collection. We’ll also put in a few comments about the figures. Hopefully this will be of interest to others and will, in a small way, compliment the great work of the team at Plastic Soldier Review.
During a recent game, a Fields of Glory scenario of the Attack of the Russian Guard, Mark and I discussed which figures to use to begin this series. Hat’s set number 8072, “1805 Russian Infantry” was an obvious choice, given the large number of Russian Guard/Grenadiers on the table.
The 1805 Russian Line Infantry set from prolific figure manufacturer Hat was amongst their earlier 1/72nd scale sets (the 72nd such set to be precise) and was released in 2003. The team at Plastic Soldier Review conclude their assessment of this set with, “This is a nice collection of figures, done in a slightly stocky style but looking good. The lack of animation is perhaps excusable since Napoleonic soldiers generally fought in large slow-moving formations. These should look impressive in the vast armies that Russia deployed against Napoleon, and are a welcome broadening of the range of Napoleonic figures on offer.”
They do indeed look impressive en-masse as the photos below attest!
Our thoughts
The set contains a good range of useable poses for wargaming (eight of them), although the march-attack figure would have been better with his musket and eyes raised a little. Mark, whose figures are presented here, prefers to have units with figures in the same pose so it was easy for him to do so using these figures, as you can see in the photos.
The figures as presented are specifically guard or grenadiers, but can easily be ‘converted’ to line infantry simply by removing the plume and doing a painting conversion.
Our one complaint, and a fairly significant one, is the lack of command figures. The set only contains an NCO holding a cane and halberd. This figure can be modified to become a standard bearer, but the lack of a drummer and officer, and also a standard bearer is a major omission.
Overall rating 7/10
Photo gallery
Photos 1–9: Massed grenadiers 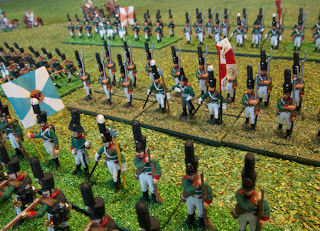 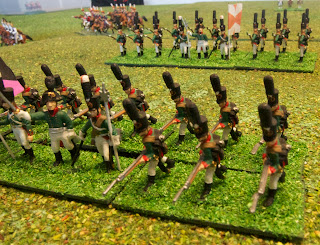 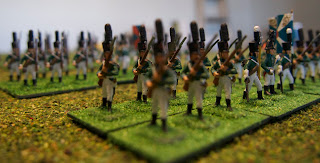 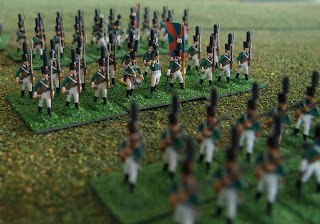 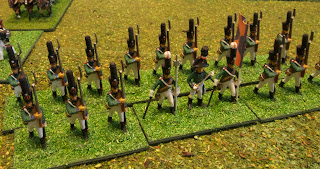 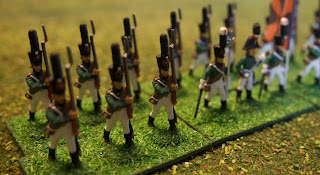 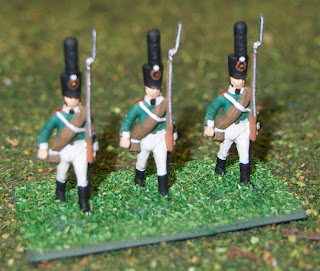 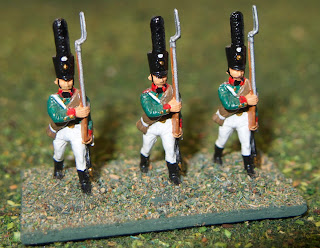 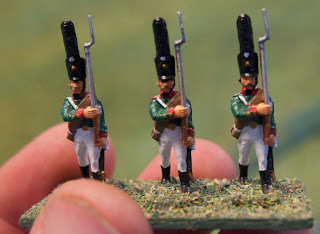 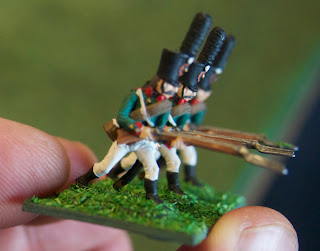 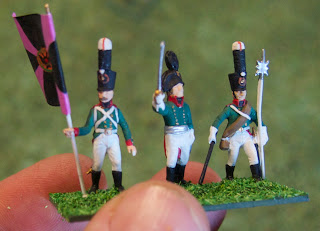 Photo 18: An out-of-focus mistake, but I liked the way that it suggested the Russian grenadiers casting a shadow over the French infantry,
as they did in the game from which these photos were taken! 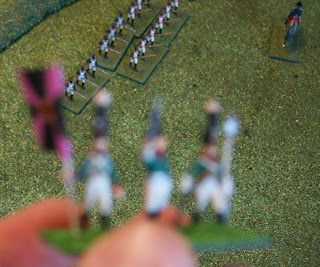