Ralph Austen Fisher died on 28th April at 15:59 AEST, after a brief illness, surrounded by family. 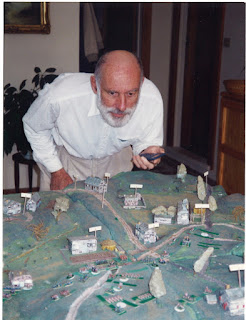 Dad in 1996, hamming it up for the camera in a photo captioned "The Intensity of Solo Wargaming". 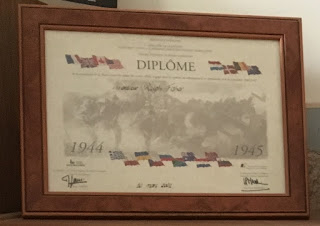 Framed award given to him by the French Government in 2001 in recognition of his service in '44–'45 (he remained as part of the occupation forces through to '49).

He had a fabulous 'innings'. Nearly 92 years of mainly excellent health. Certainly much, much more than many others get, but that does not prevent one mourning and missing someone who has been in your life for so long.

My wargaming hobby ('obsession') is one of the many things that I thank him for. From our first game in 1980, involving four units per side using the Airfix "Napoleonic Wargaming" (aka Bruce Quarrie) rules, it has steadily blossomed and I am now enjoying a mid-life wargaming heyday (wargaming 'nirvana' as we like to jokingly say).

We played regular, albeit modest, wargames (fitted around study) during my last years of high school. After I left home to go to university we'd generally fit in a wargame or two in holidays, firstly back in Darwin and then, bigger and bolder, once he and Maude (a great supporter of us both with the hobby) had moved to Tassie. Games based on Talavera (in 1/72nd) and Quatre Bras (in 5/6 mm) were amongst these. 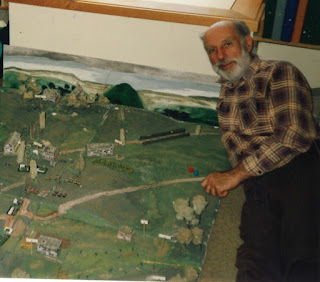 We don't have many photos from the early days. This one was taken in February 1994 during a game based on Quatre Bras.

One of those chance links of someone knowing someone else and identifying a shared interest led Dad to meet Tony, a post-war RAF veteran. They enjoyed regular catch-ups to wargame, firstly using 15 mm figures and then moving to 5/6 mm as this fitted better with the terrain that Tony had built. On Tony's sad passing in the early 90s his widow gave Dad the terrain and figures. It was this that we used for the Quatre Bras game (amongst others) and Dad for his solo wargaming in the mid- to late-90s.

Having played solo many of the French v Spanish battles of the Peninsular War, Dad decided to focus on writing, so, in 2001, he brought the whole wargaming shebang over to me! Serendipity, that great friend of he and I, meant that I had this collection, particularly our original 1/72nd and 25 mm figures as a starting point when Mark, Julian and I formed our little group back in 2010.

Having much in common, I have been fortunate in always being able to speak with Dad. Failing anything else, we could spend hours talking history and/or wargaming! It had been a joy in recent years to share the deeds of our little group at the ANF with him. Better still was to show him the set-up at Julian's (ANF-HQ) in 2015 when he came over as part of a tour around Australia for his 90th birthday. Once more serendipity stepped in as our bicentennial game of Waterloo had gone into a fourth session, so it was that game that he saw. *That* was a real treat for us both. 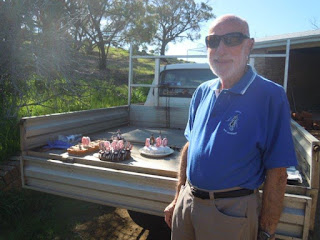 Sharing a combined birthday celebration with Dad in 2015—the ANF at five years, Stephen at 60, Dad at 90 and Napoleon at 246! 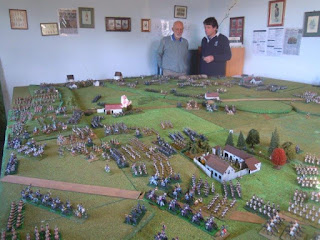 Discussing our game of Waterloo 200. 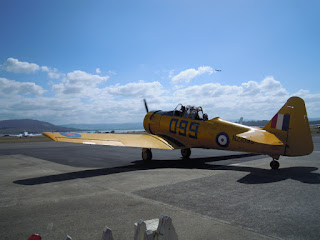 We got him a 'Warbird' flight as a combined 90th present from we 'children' and our families. He enjoyed it immensely and even opted for the optional aerobatics, including a loop-the-loop!

Making the most of Dad in his 90s became a focus, hence my trip to the eastern states at the beginning of this year allowing my son and I to see Ralph and Maude in St Helens—plus my joining the Nunawading fellas for their magnificent game of Austerlitz! A discussion during this visit yielded an unexpected opportunity for Dad and I.

I'd brought some figures and paints with me in the car to do some painting during the trip (I did actually do a little bit!). This got me thinking about the possibility of bringing some figures over to him for a game later in the year. After a bit of discussion and checking the numbers of figures and area required, we settled on having a go at Ocaña, a battle that neither of us had done previously, in November.

Dad then said that he'd like to have a go at doing some of the painting. "How marvellous," I thought. He decided to begin with Spanish infantry and to work from the top down (in the army list), so I sent over four units of the Vanguard for him to begin with and to see how he enjoyed it. (Meanwhile I had begun with the Spanish cavalry).

He sent some photos of the first unit that he'd done, the Granaderos Provincales. He was enjoying the painting, but reckoned that they were not that good. I disagreed totally; I thought that they were marvellous! He got a second unit, Real Maestranza de Ronda, more or less completed before they left on the trip during which he fell ill, with what we later found out was a long-developing condition. 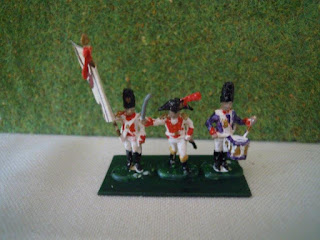 Granaderos Provincales. Dad's first painting of figures for 10+ years. I'll be ecstatic if I can paint anything as good as this, should I make my 90s! 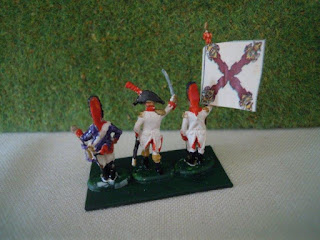 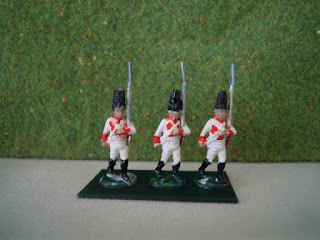 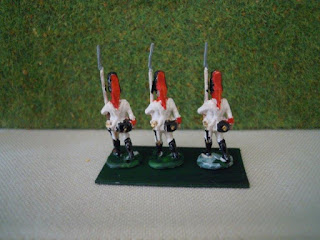 Figures are by Hät from their Spanish Command and Spanish Grenadiers sets. 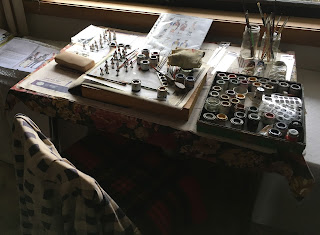 Dad's painting table, featuring the Real Maestranza de Ronda, the final unit that he painted. Undercoated Voluntarios de Valencia next to them. 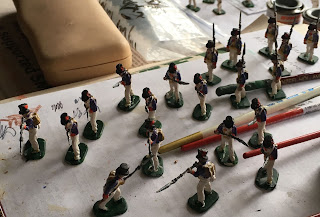 Figures are by Hät from their Spanish Guerillas set.

Sadly, that last wargame with Dad will not happen. We will do the game though, over here, as the first of what I plan will become our annual RA Fisher memorial game. The Granaderos Provincales and Real Maestranza de Ronda will take their place proudly in the Spanish army.

Thanks Dad; for everything. You left an indelible mark and I miss you heaps. You lived your life to the full in your own way and went pretty much as you wanted--up and about touring one day and gone quickly with a minimal period of incapacitation.

Love you always.
Posted by James Fisher at 11:42