On Saturday I joined some of the fellas at the Napoleonic Wargaming Society for one of the 'Games Day' (weekend wargaming days), of which there are three or four per year. This one, inspired by the Open Day held for the bicentennial of Waterloo, is meant to have a Waterloo/Napoleonic theme.

It was not a great turn out, but I was one of five players who had the pleasure of being part of the game of Ligny organised by 'Marc' of  'one-eyed', I mean 'One Sided' fame! :)

You'll get more detail and background to the game from the report on his blog. I have taken his 'one-sided' mantle for this report!! 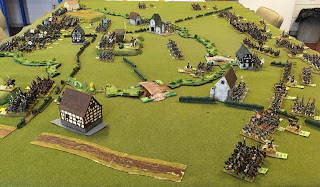 The table at game's start. 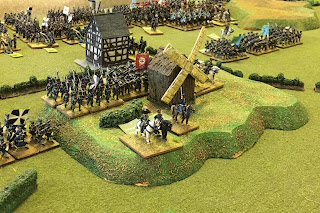 Zieten at his command post, Blucher is just the other side of the windmill. 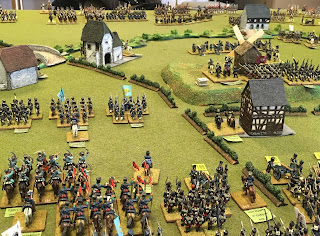 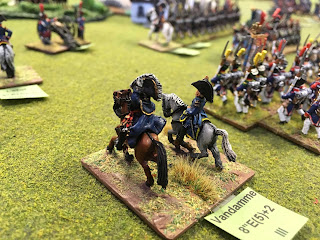 I had the joy and pleasure of acting as Dominique 'Jean-Claude' Vandamme for this one. 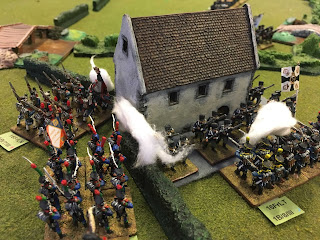 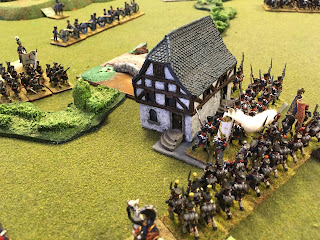 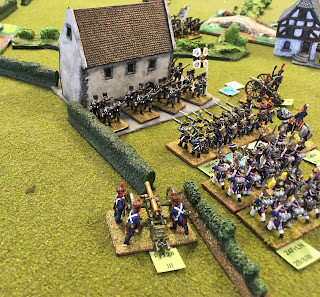 Both attacks were repulsed. 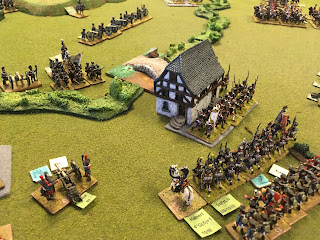 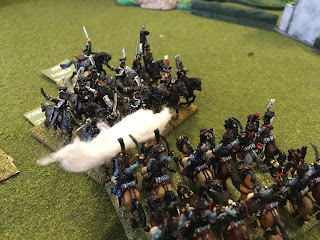 Roeder's 2nd brigade (represented by hussars) had the audacity to charge Domon's horsemen. An indecisive mêlée saw them recalled to safety to reform. 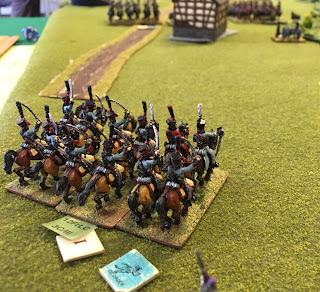 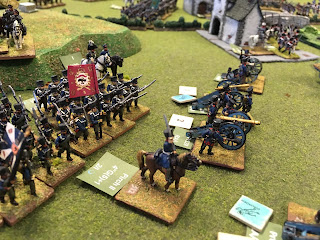 Zieten ordered reinforcements forward to support his outposts in the villages, under the watchful gaze of Blucher. 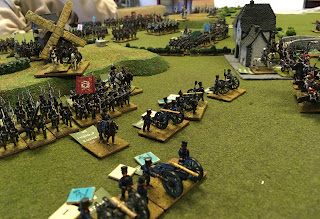 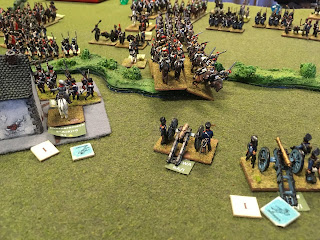 Milhaud launched his 13th heavy cavalry division across the Ligny brook to assault the left flank of the Prussian reserve artillery. 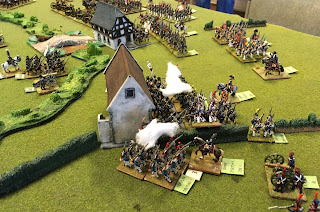 Meanwhile, I sent Girard's, Lefol's and Habert's men in for a second attempt on 'the St Amands'. 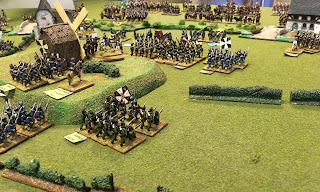 More Prussians on the move! Note that Milhaud's cavalry have retired back over the brook. 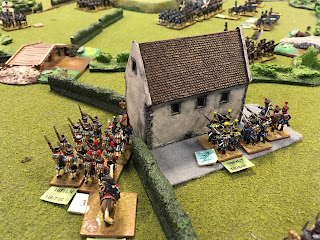 This time we were successful in St Amand la Haye... 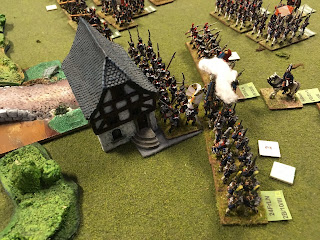 but staunch defence beat off our attack on St Amand. 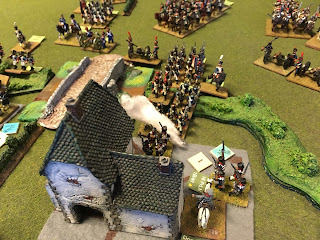 On the French right flank, Gerard made a concerted attack on Ligny. 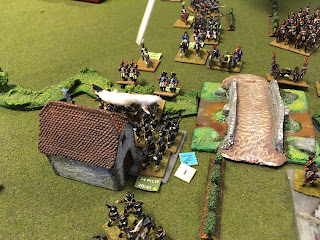 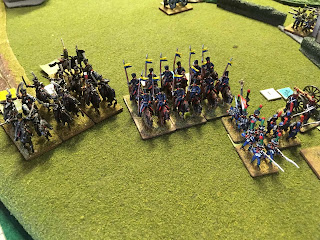 Meanwhile, back on the left, Roeder's horsemen were at it again. This time two brigades ganged up on Domon, causing the latter to withdraw. 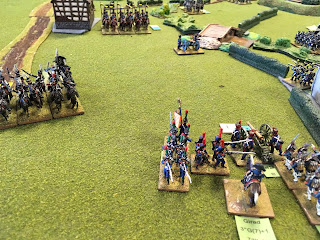 The Prussian's 1st brigade got carried away with the victory, only to be seen off by the square formed by Girard's 1st brigade. 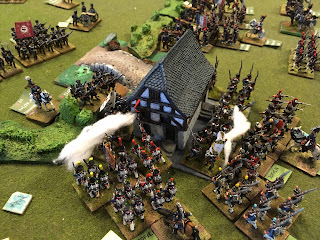 Another attack on St Amand. This time it was Habert's men who attacked the village, supported by a brigade of Berthezene's men, who took on some of the Prussian reinforcements attempting to deploy on the southern side of the brook. 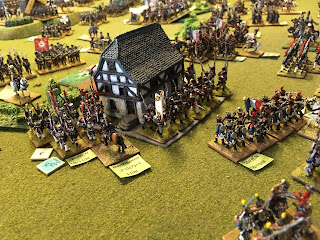 The Prussian supports were driven back, but so too was the French attack on the village. 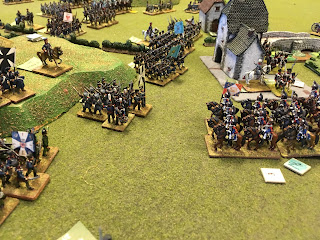 It was getting 'hot' in the Prussian centre thanks to a successful charge by Milhaud's 14th heavy cavalry division... 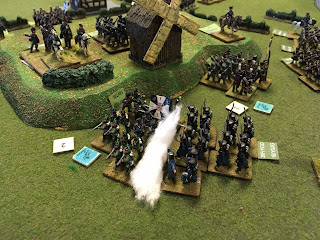 supported by the Young Guard. 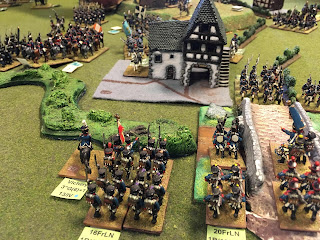 The defenders of Ligny had been driven off by fire, but alas, with no French available to take advantage, one of the Prussian reinforcing brigades would be able to walk into the town, occupying it, but not deployed. 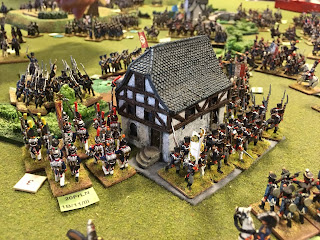 Back on the left, Berthezene's 1st brigade stood ready to defend the line of the brook while Habert's brigades reformed for another assault on St Amand.


Unfortunately, we had run out of time. What a bummer given that the battle was heating up and so interestingly poised.

Never mind, having played it this far and all enjoying the challenge, Marc has in mind to run it again, but at Biko's so that it can be left set-up if necessary and played to a conclusion.


Thank you so much to Mark H. ('Marc') for organising the game, providing the figures and umpiring and to Darren, Biko, Stephen and Steve for playing the game in the 'right' spirit—naturally.

I finally felt that I got a handle on Napoleon's Battles, working with and 'in' the system rather than being somewhat bemused and befuddled by what was occurring—as has happened in previous games using these rules.

I am looking forward to playing the game again and this time to the 'bitter end'!