A drama in two parts
The Game
The Battle of Tamames was a rare victory for Spanish forces in 1809. With Ney on leave in Paris command of VI Corps passed to General Marchand. Hearing of the advance of Del Parque's Army of Galicia to the village of Tamames, strategically located at the junction of the roads from Ciudad Rodrigo and Salamanca, Marchand advanced to the attack. He sent his forces in two uncoordinated attacks against the left and right of the Spanish position. While the former attack proceeded well, the latter faultered against stiff resistance from Losada's division. In the end both French attacks "ran out of steam, neither being strong enough to push the Spanish from their defensive positions. The French retreated in some disarray and left the Spaniards in possession of the battlefield" (Le Feu Sacré scenario).

I purchased this scenario for the Battle of Tamames for the Le Feu Sacre rules from the Too Fat Lardies website. We played the first version of the game as a play-test of the rules (see our review here) and then a second version using Shako, as a comparison. We each played each side, firstly Mark taking the Spanish and me the French and then swapping over for the second game (Julian was absent for both of these games).

With a strength of around 20 000 in the Army of Galicia, Tamames tested our collection of Spanish troops, so we took the option of not including Belvedar's division, thus giving the French a more 'sporting' chance. 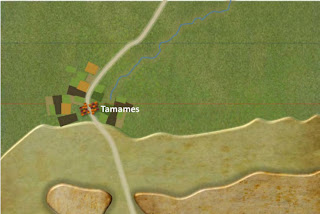 Map of the battle from the Le Feu Sacre scenario, north at top. The red line is the limit of deployment for the Spanish and the blue for the French.
Version 1, Played Using Le Feu Sacré
(8th ANF game, played 20th March 2011)

I did not take systematic photos of this game, but below are a few pictures that give an idea of how it progressed. 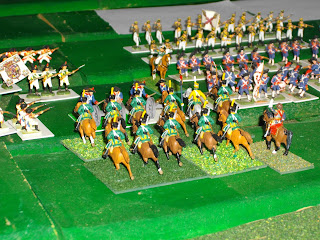 French chasseurs from Lorcet's division approach the battery from Losada's Spanish division without them being able to fire a shot. The cavalry made a multiple move under a 'blind', which the Spanish did not successfully 'spot', and then charged in tactical movement. 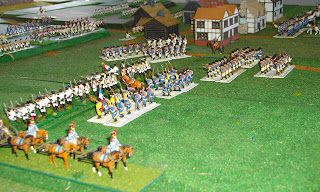 Maucune's division advanced towards the Spanish centre-right while Marcognet's attacked the east of Tamames (in the background).

La Carrera's division posted in and behind Tamames.

The Spanish right flank was held by Losada's division. 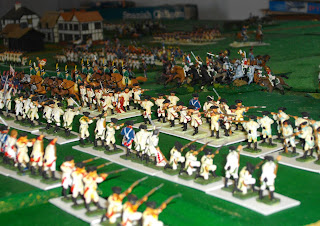 Another view of the same.

Meanwhile in Tamames, La Carrera's troops were under assault from Mathieu's 27e ligne. 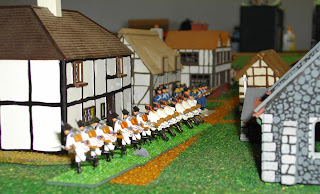 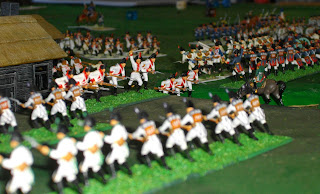 The Saragossa Regiment from La Carrera's division (represented by 'stand-in' figures with red facings!) retreated after being forced out of Tamames.

but their first attack was not successful. 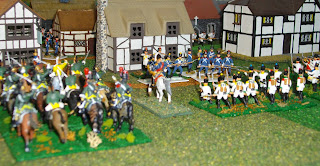 The second battalion of Matthieu's 25e légère too were driven back by the defenders. 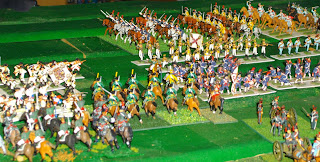 Mathieu's 27e and 59e ligne attacked the Spanish in Tamames in force while his  25e dragoons made for the western flank.

Maucune's 6e légère and 69e ligne advanced onto the ridge. 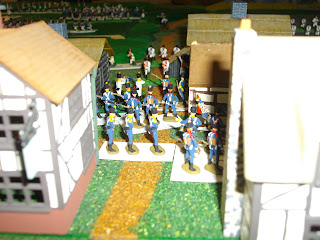 Maucune's division had a toe-hold on the ridge. 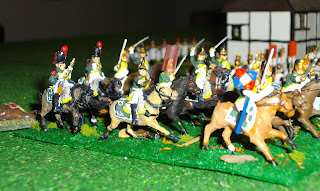 Mathieu's 25e dragoons (heavily disguised as the 23e) manoeuvred around to the west of Tamames. 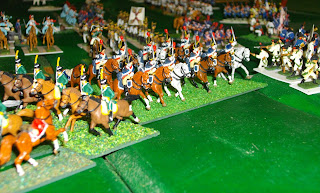 In the last stages of the game one of the more bizarre encounters occurred. The French chasseurs in the left of the picture were charged in the flank by the Spanish cavalry in the distance (Anglona's Granaderos de Llerena represented by hussars). The chasseurs prevailed, despite also being 'blown', mainly because their higher class counted twice; as a negative on the factors of the Spanish horse and as a positive for the chasseurs! 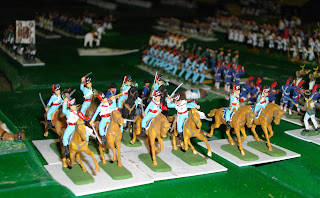 Result: a draw as neither side scored a minor victory. 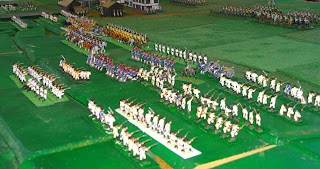 Del Parque's Army of Galicia arrayed in defensive formation. Note Anglona's cavalry at the far (western) end of the line.

This time Marchand sent Lorcet's cavalry around the western side of the town. 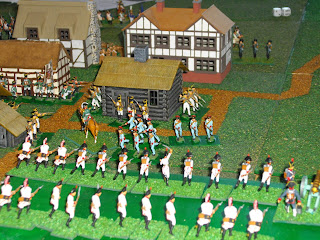 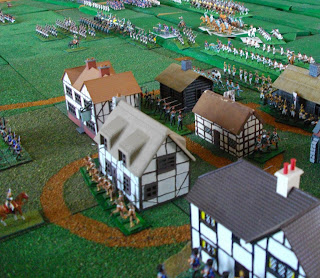 allowing the French light infantry to enter the town. 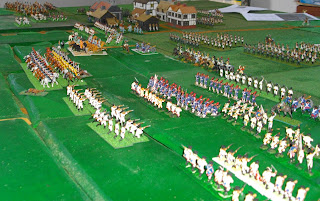 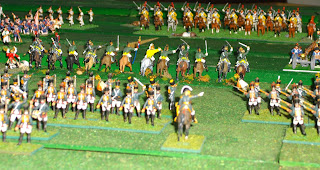 and prepared to take a toe-hold on the ridge. 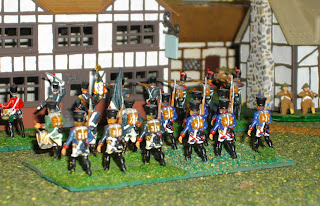 Close-up of one battalion from each Maucune's 69e ligne and 6e légère attacking Tamames. 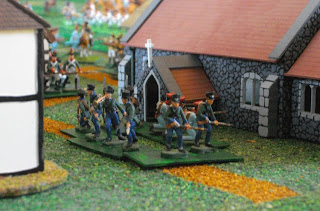 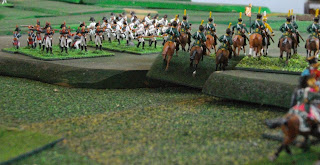 Mathieu's infantry moved onto the ridge, in the face of Anglona's cavalry.

While Lorcet's cavalry applied pressure on the Spanish left 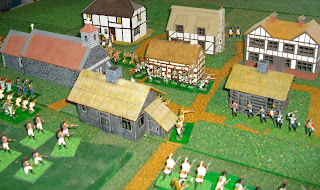 and Maucune's troops made fairly easy work of clearing the town. 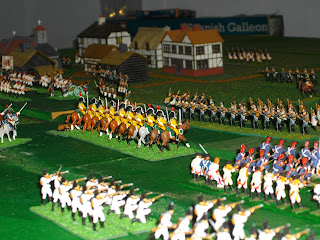 A last turn special: Anglona's Regiment de Borbon (represented by the Villaviciosa Dragoons) charged the 1st battalion of Mathieu's 25e légère, but were driven back by a powerful volley.

At game's end (time-based), the French were threatening the Spanish position, but, just like the real thing, were beginning to "run out of steam".

Result: Close to a minor victory for the French.

Our impressions
These were enjoyable games and, even with the reduced number of Spanish troops the task proved difficult for the French. It's tough commanding a Spanish army of the Napoleonic wars, particularly the early Peninsular Campaign and this was made more difficult under Le Feu Sacré.