Book Review: 1812 Napoleon's Invasion of Russia (The March on Moscow, Napoleon in Moscow, The Great Retreat), by Paul Britten Austin
(Book cover art kindly provided by the publishers. Please do not reproduce without obtaining permission)
This account of the 1812 campaign is like no other in the English language. Austin has combined descriptive prose with quotes from primary sources to produce a readable account. It is similar to the approach that was used by French historians such as Lachouque, Hourtoulle and Houssaye. 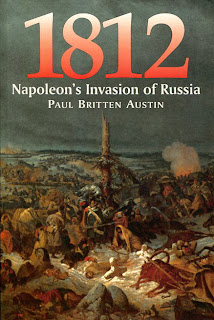 By using present tense he brilliantly combines his own prose with extracts from memoirs and letters into a story-like telling of the history that transports the reader back two hundred years. We are there observing Napoleon throughout the campaign; we see what those around him and elsewhere in the Grande Armée saw and we ‘experience’ what they experienced.

I have the single-volume, paperback edition of this fabulous trilogy of the 1812 campaign—the three-in-one, budget version. It has since been re-released as the original three volumes. These latter are better reproductions of the work, particularly the plates and maps. Naturally the content is the same, but, in hindsight, I would have preferred to have spent more on the better quality, three-volume version.


Book One, The March On Moscow begins with the an introductory chapter explaining the build-up to the campaign and how we have arrived here, in Poland in June 1812. We are then transported to the ‘present’ and we experience the falling discipline as the army moves from fertile quarters in the western German states to the relative harshness and shortages of food and forage in East Prussia and Poland. Despite this, on the banks of the Nieman there is a sense of inevitable victory. An incident where the Emperor falls from his horse, re-mounting unhurt, has the superstitious among us worried, but who could resist a force of 350 000 combatants and 984 guns, their bright uniforms, silver and gold glistening in the midsummer’s sun? 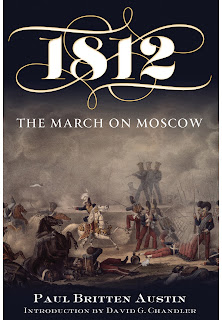 This magnificent pen picture continues as we march deeper and deeper into Russia across the dry emptiness of Lithuania, which turns to mud with sudden summer storms. “Even the men who’ve served in Spain—and there are many—soon begin to feel depressed by its sombre aspect” (p. 59). Stragglers increase, men fall and some even commit suicide. “Most of Napoleon’s campaigns had started in similar fashion” (p. 62), but this is Russia 1812 and everything is magnified doubly.
We experience Bagration alluding the first envelopment, the bloody Battle of Ostrowno, the near perfect manoeuvre of the first battle of Krasnoe which, having missed, lead to the bloody assault on Smolensk, the Battle of Valutino (Lubino)—another missed opportunity—and the march through heat and dust to bloody Borodino.
Thanks to Austin’s use of eyewitness accounts, we are taken, as if by helicopter or as a “fly on the wall” to each point of the action. We are there when the guns open up, slowly at first and then “like an earthquake” we join Delzons’ men as they drive the Russian Guard jägers from Borodino and across the Kolocha, only to be driven back by a Russian counter-attack. We join Compans’ men in their first successful attack on the flêches, but they too are forced back by a Russian counter-attack. We ‘experience’ each stage of the terrible battle, as seen through the eyes of those yet to be committed to the struggle. We see the troops resplendent in their full dress—none look finer than the veterans of the Imperial Guard. We are also there to observe Napoleon, static and almost aloof, laid low by illness. Finally we experience first-hand the capture of the Grand Redoubt in the last, desperate action of the day. At the conclusion of the battle we are taken across the battlefield to witness the “butcher’s bill”...
The first book of this trilogy ends with the entry into Moscow, “Eighty-two days have passed since the Grand Army crossed the Niemen.. it has marched 825 miles, fought two major battles... Only two-thirds of its effectives are still with it eagles... Yet Napoleon isn’t an inch nearer to his objective—to force Russia back into the Continental System... And tomorrow he’ll get the shock of his life—as Moscow, as if by spontaneous combustion, bursts into flame” (p. 356).
The second book, Napoleon in Moscow takes up the story. with entry of the French-allied army into the city, “Europe’s second largest and far and away most exotic capital...” (p. 18). But it is not the grand entry into a capital of previous campaigns. Through the eyewitnesses we experience the strange anti-climax of entering an empty town, wondering if it is a trap. Some incendiaries, dressed as policemen, are brought before Napoleon, Apparently they are acting on the orders of Governor Rostopchin. There is “...a violent detonation on the side of the Kaluga Gate. [...] It seems to have been an agreed signal” (p. 26). Then the city is set afire. 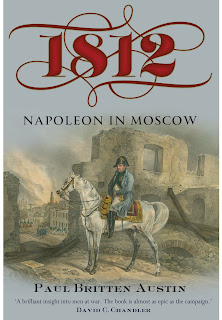 Following the great fire we enter a phase when Moscow is turned into a large bazaar as soldiers sell the loot that they have accumulated and, with winter approaching “whilst only few of us thought of providing ourselves with warm clothes and furs against the coming winter, many ladened themselves down with a mass of useless things” (p. 63). Napoleon is awakened from his delusional ‘slumber’ by the Russian ‘surprise’ attack on Murat’s dispersed troops at Vinkovo (Tarutino). Belatedly he makes the decision to quit the capital and march south towards Kaluga.
The Russian army—more particularly Dokhturov—moves quickly to cut us off. Prince Eugène’s French, Italian and Spanish troops lead the attack in this bitter encounter battle and struggle for a key strategic point. Increasing numbers are committed by both sides. It is particularly intense and hard-fought, even in a campaign that has been marked by such fights. The months of campaigning without a clear result and the high stakes ensure that, as Wilson put it, “the enemy was infuriated by despair, the Russians by ‘the Moscow cry of vengeance’” (p. 206).
Parried at Maloyaroslavets the fatal decision is made, perhaps the only one possible under the circumstances, to retreat via the route of the original invasion... 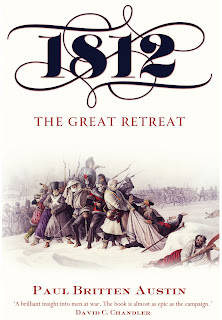 Thus the final book, The Great Retreat begins with ‘a word unknown in the French army’...
We are soon introduced to some ‘new’ troops, les hourrassiers, the nickname scornfully given to the Cossacks whose cries of ‘hurrah’ translate into death for the invaders (p. 24). In another terrible tit for tat in this brutal campaign we reciprocate the Russian scorched-earth tactic, following an order that “every village, every house, every cottage, every barn along the route to be fired” (p. 31).
The weather is cold and often wet. Lack of food soon tells and we then re-cross the terrible battlefield of Borodino. “The famous battlefield is exactly the same state as we’d left it in on 8 or 9 September. More than 20 000 corpses of men and horses in a more or less advanced state of decomposition were lying where they’d fallen” (p. 45).
We have our first significant combat with the pursuing Russians at the second battle of Viasma. It begins with an all-too-common occurrence, “Cossacks yelling frighteningly, came out and fell on this unfortunate mass [artillery, carriages and vivandière’s carts]. At this sight, each man, driven by fear, acts on impulse” (p. 66). It is not too long though and “some roundshot whistled past our ears. After a few moments an extremely lively fire of guns and musketry started up on our left” (p. 67). Eugène and Poniatowski send their troops to assist Davout’s rearguard and a bitter struggle ensues. Finally it is “...Ney who, by coming back to the other corps’ assistance, has stabilised the situation” (p. 70). “...The Russians were put to flight, yet without being able to take any of their cannon” (p. 71).. The stragglers though are becoming a bigger and bigger mass “recognising neither chiefs nor discipline and only heeding its thirst for pillage...” (p. 69) and are impeding the rapidly diminishing army.
It begins to snow. “The Russian winter... blasts the army with its icy breath. [...] this suffering of a kind we’d so far not experienced” (p. 87). Vitebsk is lost so we continue on to Smolensk, but “where are all the ‘immense supplies’ that should be here at Smolensk?” (p. 124). “Men flung themselves on the food stores. These were smashed in, looted. There were men killing each other, suffocating each other” (p. 138).
We are with the Guard when it turns at Krasnoe to fight off the Russian army and allow the remnants of IV Corps and I Corps to escape but Ney and the rearguard are cut off. The army marches on towards the Berezina but “as for what is happening to Ney, that’s anyone’s guess” (p. 191).
So begins the epic night march of Ney and his rearguard to the north of the Russian army to cross the Dnieper. Harassed by Cossacks and surrounded by 100 000 men they are driven on, largely by the force of will of the Marshal, and reach Orsha where Eugène “...has been told to wait until midnight for Ney until midnight” (p. 202). "After the ‘Qui vive?’, to which the answer was ‘France’, he and the Marshal embraced. Immediately there was a joy hard to describe, which somewhat revived our flagging morale” (p. 203).
We move then to the penultimate action of this most disastrous campaign for the French-Allied army and all those in it; the crossing and Battle of the Berezina followed by the slaughter and capture of the remaining stragglers after the bridges are destroyed. “The most afflicting spectacle anyone could see. The Cossacks flung themselves on these people who’d been left behind. They pillaged everything on the opposite bank, where there was a huge quantity of vehicles laden with immense riches. Those who weren’t massacred in this first charge were taken prisoner and whatever they possessed was falling to the Cossacks” (p. 312).
Yet those who escape the Berezina are still not yet out of danger. The Emperor makes the decision to quit the army and return to Paris. “This news destroyed what was left of the army’s courage. The men were sombre, and lost all hope of ever seeing their own country again” (p. 351). Indeed many would not. Vilna is not the haven hoped for bringing only confusion, illness, a fight for survival and then the Cossacks arrive. “On all sides one heard shouts, oaths, whiplashes being applied, and groans in I don’t know how many languages” (p. 390).
Finally, amazingly, some do leave Russia. Count Dumas rejoiced at leaving “that cursed country” and he and some friends were drinking “some excellent coffee when a man in a brown greatcoat entered. He had a long beard. His face was blackened. And he looked as if he’d been burnt. His eyes were red and gleaming. ‘At last I am here,’ he said. ‘Why, General Dumas! Don’t you know me?’ ‘Why no. Who are you?’ ‘I am the rearguard of the Grand Army. I’m Marshal Ney.’”
So this remarkable story ends with the coalition forces buoyed by disaster that has befallen Napoleon’s army and him gathering fresh armies to “...defend his crumbling empire” (p. 423).
Austin’s account is purely through French-allied eyes and focusses principally on the mistakes, overestimations, poor coordination and examples of Napoleon’s ‘hubris’. The problems and sufferings of the Russians are only covered in-so-much as they are brought about by an invading army. This in no-way detracts from the value of this magnificent book, but merely puts it in context.
This study is a must. Whether the single-volume version or the more desirable three separate books, these are ‘keepers’ that belong in the personal library of any Napoleonic enthusiast.