No Te Deum this time: Prince Eugene vs Marshall Vendôme at Luzzara

The evening of 15 August, 1702, Prince Eugene struck at the encamped French army, intending to surprise them and inflict a decisive defeat, sufficient to end the Italian campaign in one stroke. Historically, the battle was indecisive, although French casualties were twice those of the Imperial forces. What would our refight bring?

Here, the historical battle, the Prince in the foreground, Luzzara in the background. 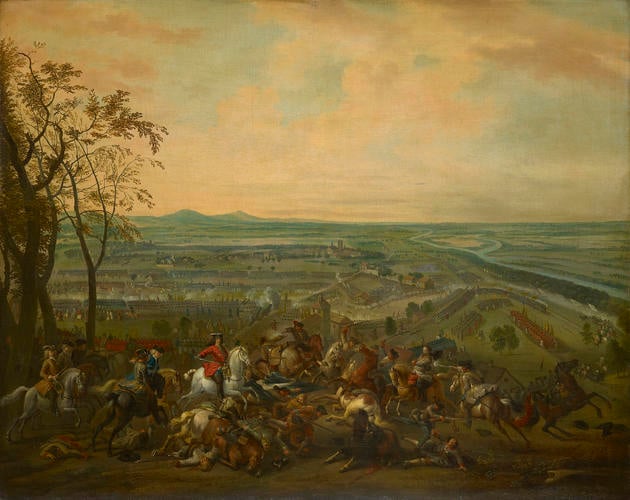 From Nafziger, it is possible to derive the Imperial army list, but unfortunately, that of their opponents has been lost to history. 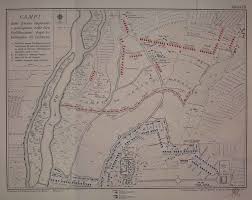 Generally we are reluctant to adjust dice rolls in the Zimmermann rules we use for 18thC battles, but as all the historical sources agree that the Imperial forces enjoyed better provisioning and higher morale, we allowed a +1 for the Imperial unit starting morale. Starting morale is of course often dwarfed by the results of encounters, but it was at least a gesture to history.

And here, our battle - my favourite historical period, and therefore a delight for me to see - about to commence. To the right, the small town of Luzzara, with Marshal Vendôme ensconced in the tower, protected by a reserve battalion, with two lines of infantry with 'before them many ditches, and fences made with trees'. Massed cavalry to their left, and in the distance, to their right also, with in addition a number of infantry battalions. On the left, the Imperial army about to cross the difficult terrain between the canal and the town, in two lines, the left under Visconti and the Prince of Commercy, the right under Vaudémont,with Prince Eugene in command in the centre. 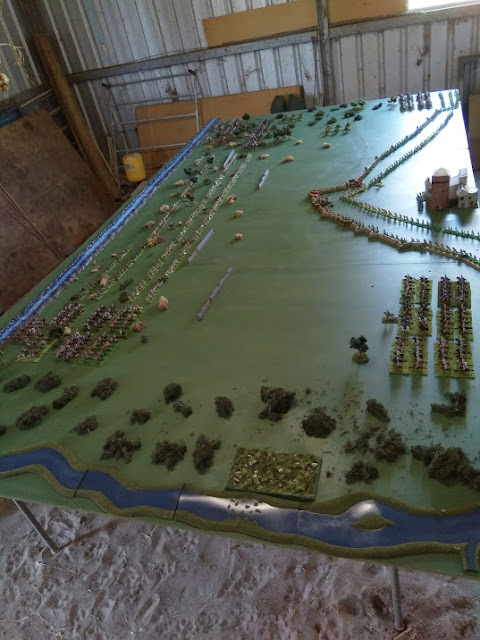 As Vendôme my plan was to be a little more aggressive than he was historically; I pinned my hopes on a combined arms attack on my own right flank, hoping only to hold my left and to blunt the Imperial attack in the centre with what I hoped would be a simply devastating - but rather bold - concentration of my entire artillery right at the tip of the spear, the most advanced part of the French position.

Nothing very exceptional, by the end of Move One, except that the French artillery were already telling heavily on the exposed Imperial lines making their way slowly across the dense terrain. 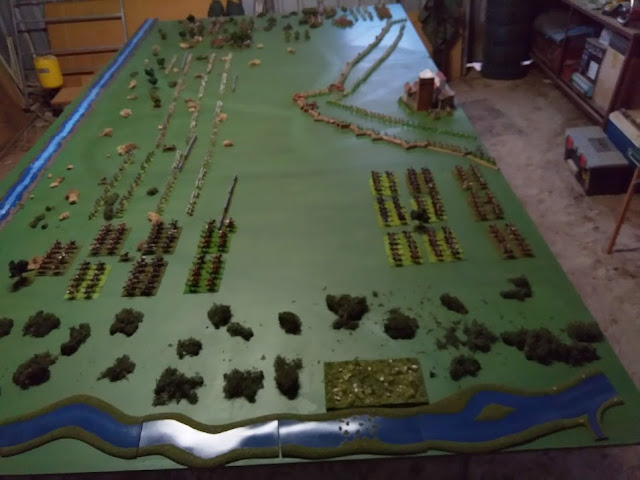 And really not much more by the end of Move 2, as the cavalry on each flank prepared to engage. 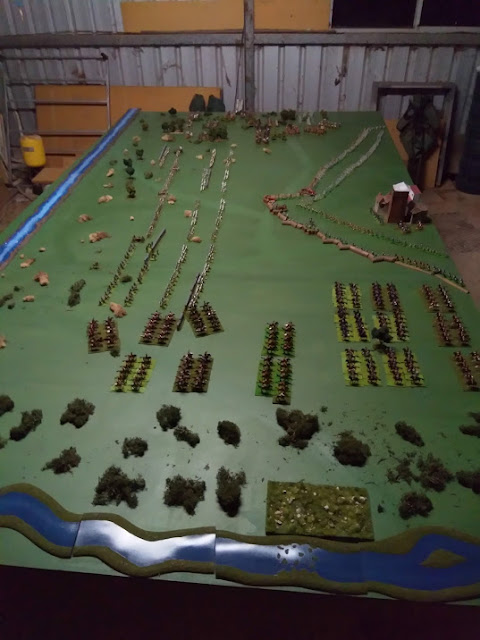 Two hours had elapsed, and both sides would be forgiven for thinking that the battle that was about to be fought would be both long and indecisive.

By the end of Move 3, the cavalry clash on the left flank, though the French had won, seemed to have set them up for the loss of their entire flank. All three victorious units had lost heavily, and if they were defeated, there was a very real chance that their comrades behind them would not stay to continue the fight. 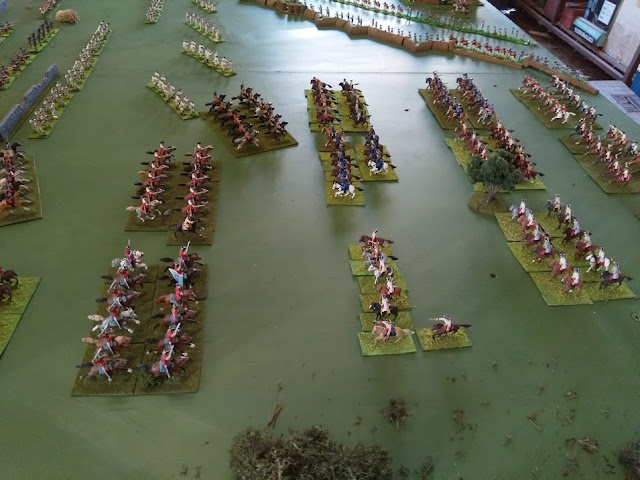 But notice the depletion in Imperial cavalry strength; and notice too the potentially exposed Imperial infantry to the left of Sereni's and Vaubonne's cavalry. The risk played both ways.

In the centre, where you can pick out Albemarle's Irishmen - so good to see troops painted some forty years ago back on the table - awful artillery casualties had not been repaid either with accurate return fire on the French artillery or even some hand-to-hand fighting with the entrenched infantry. Imperial infantry battalions were beginning to melt, casualties were rising... 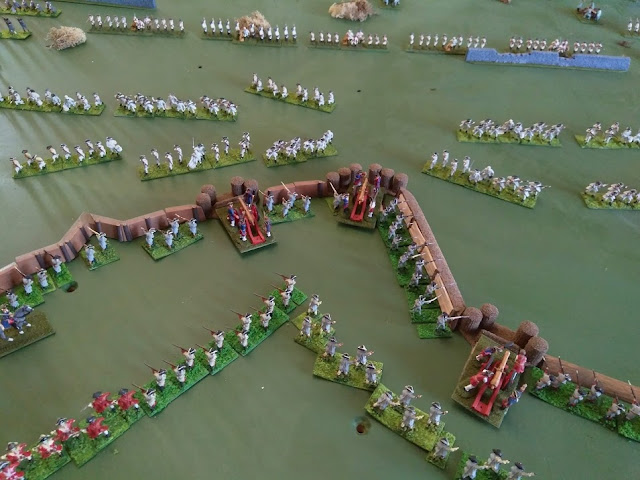 ...and the worst events of all were unfolding on the Imperial left, where despite the defeat of one French cavalry regiment, seen to the bottom right of the picture below, the Imperial forces had resolutely refused to desert their positions, and were now in a position to catch Visconti and Commercy in the midst of withering infantry fire as well as superior cavalry forces. 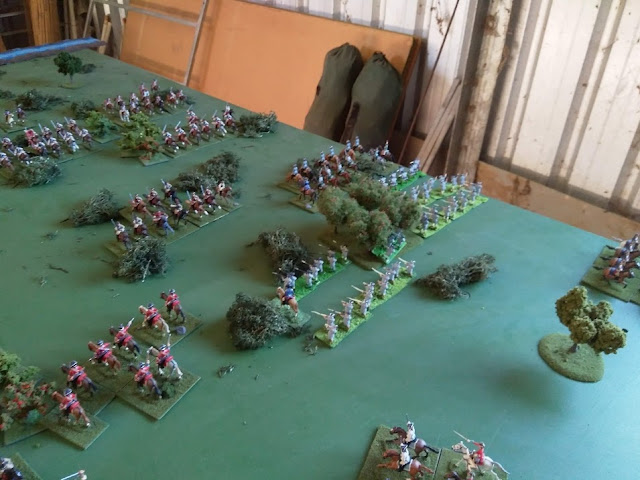 But far worse was to befall the Imperial army, on a day that Prince Eugene would undoubtedly have not commissioned a painting to celebrate. On his right flank, to my immense surprise, the three battered French cavalry regiments came through every time. The entire Imperial cavalry under Sereni and Vaubonne just melted away. Suddenly the ground was clear, and it left the Imperial infantry appallingly exposed. 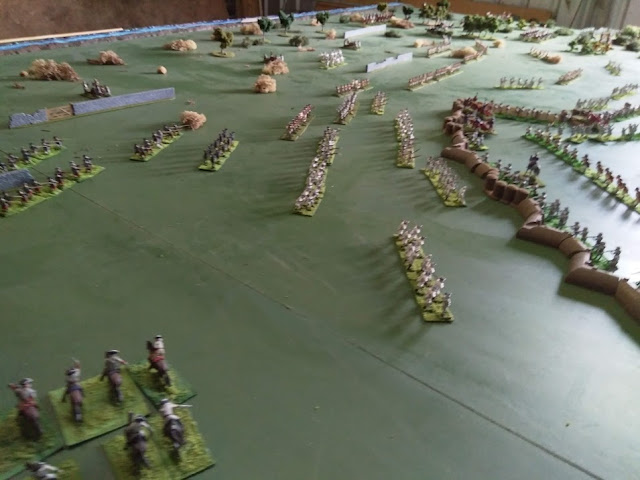 Matters were no better handled on the Imperial left, where although a regiment of French dragoons had been left very exposed, retreating troops forced a general withdrawal. We presumed the Prince de Commercy lost in the fray, as he very well might have been, and was after all, historically. Visconti's remaining cavalry showed an understandable reluctance to engage as a result. The key had been the resolute morale of the Imperial infantry, who could so easily have chosen to withdraw, but instead pressed on, obtaining at least one clear fire at relatively close range against milling Imperial horse. 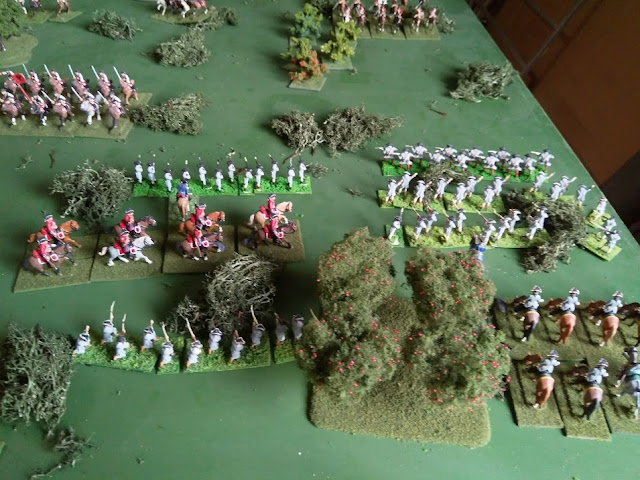 And in the centre, the end of Move 4 saw only further Imperial casualties, with nothing to show for it. In the historical battle, Imperial forces did manage to close, and gave a good account of themselves. However, there is no record of the disposition of the French artillery. In our case, everything was concentrated in one place, as you see below. 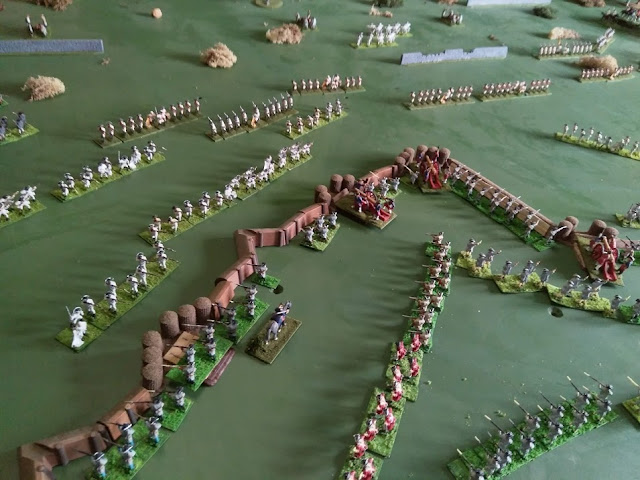 In a fashion most appropriate for a War of Spanish Succession battle, after all these losses, at this point Prince Eugene offered to parley, and it was agreed that he should concede the battle and withdraw. One might be tempted to criticise the rules, but I am more than willing to admit, the dice gods were in overdrive support of the French case on the day: roll after roll went my way, and I can claim credit only for relative boldness on the right flank, not my superlative luck in the centre and left. Nevertheless, as Marshal Vendôme I shall now complete the task of driving the Imperial army out of Italy altogether, and place the spoils of war at the feet of the Sun King himself. Vive Le Roi!

Below, the historical report of the action by the London Gazette. It was 'a great victory', for which the Te Deum was sung in the Imperial camp. Imperial losses are described as only 795 killed, and 1,885 wounded, whilst French losses are estimated at a minimum 5,000. Whilst this may have been an exaggeration, in our refight, French casualties were extremely low - only 49 cavalry, which at the figure scale we had chosen, around 1:45, meant only around 2,200 casualties, with not a single infantry loss. Imperial losses, on the other hand, amounted to 122, of which half were infantry. That was approximately 5,490. A complete - more than complete - reversal of casualties compared to the historical action. 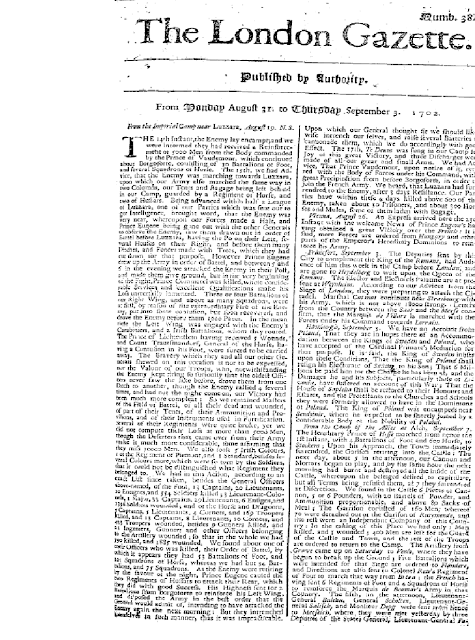 I am slightly at a loss to imagine how it would have reported ours.