The Most Terrible of all My Battles: Wargaming Borodino 2012 (10)

Regular readers of this blog may have been wondering what happened in the bicentennial Borodino game that we held on 7th–9th September. Having been occupied with the preparation for the game for much of the two weeks beforehand, I have since been catching up on work. I am slowly making a bit of time for wargaming stuff again now, so here are a few photos from our game to whet your appetites. 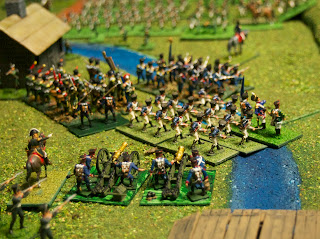 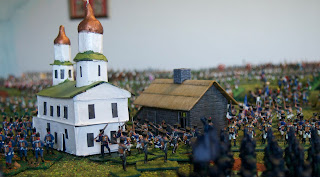 It truly was, "the most terrible of all my battles"!

Thanks to Stephen, Rod and Peter who came up from Perth to help/join us in fulfilling a wargaming dream. We really enjoyed ourselves (except for the result, ha ha!). Despite the bad outcome for 'my' side, I still had a sense of 'loss' on the Monday at the completion and passing of something that we had been planning for so long.

As with all the best of wargaming, we all have a greater appreciation of Borodino now that we have "been there". The immensity of the struggle, the problems of command and control, the waste of good men, the amazing feats of arms on both sides, the importance of Platov and Uvarov's 'raid' and what an achievement it was for the French-Allies to have won the battle; pyrrhic victory though it was.

We are already planning our alternative versions of Borodino!
1. Run the game as a "re-enactment".
2. Play again with different players as Napoleon and Kutusov.
3. Play a version with Davout's plan.
4. Play a version without restrictions on Guard and Russian reserve artillery.

I am working on a couple of more detailed posts that will incorporate more of the 449 photos that Stephen and I took over the weekend, so keep an eye out!
Posted by James Fisher at 03:23