The Britons had revolted. Camolodium was burned to the ground, the IX Legion ambushed and annihilated…

Suentonius Paulinus, military commander of the province, returned to Londinium from the island of Mona where he had defeated an army of druids, to oppose the advancing Britons. Considering his small force and learning from the lesson of the rashness of Petilius (commander of the IX Legion), he decided not to defend the town, but to “..save the country as a whole at the cost of one town.. he gave the signal for departure, and embodied in the column those capable of accompanying the march: all who had been detained by the disabilities of sex, by the lassitude of age, of by local attachment, fell into the hands of the enemy” (Tacitus Book XIV: XXXIII).

“Suentonius had already the fourteenth legion, with a detachment of the twentieth and auxiliaries from the nearest stations, altogether some ten thousand men.. he chose a position approached by a narrow defile and secured in the rear by a wood…” (Tacitus Book XIV: XXXIV) and here prepared to meet the Britons.

The armies deployed for battle. 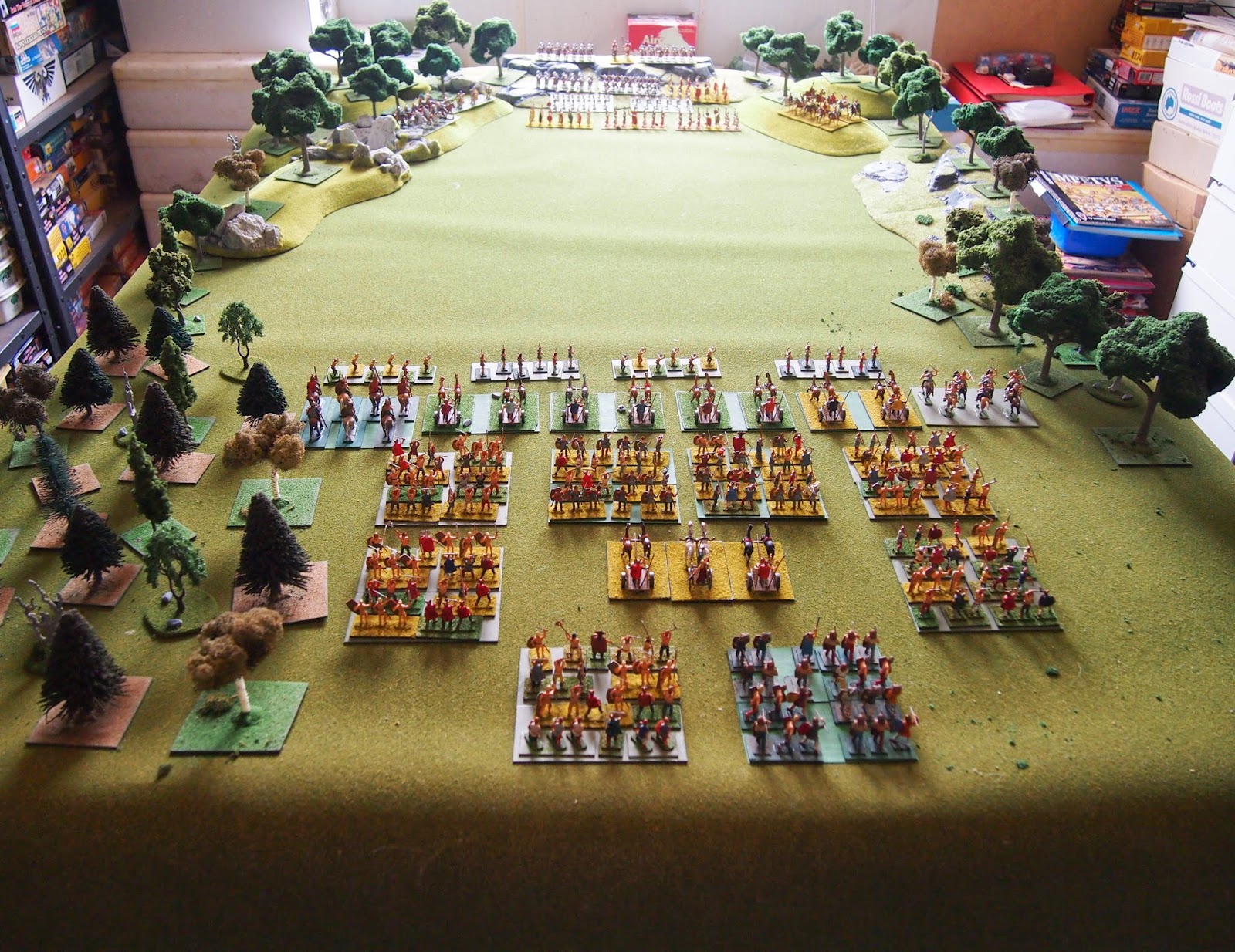 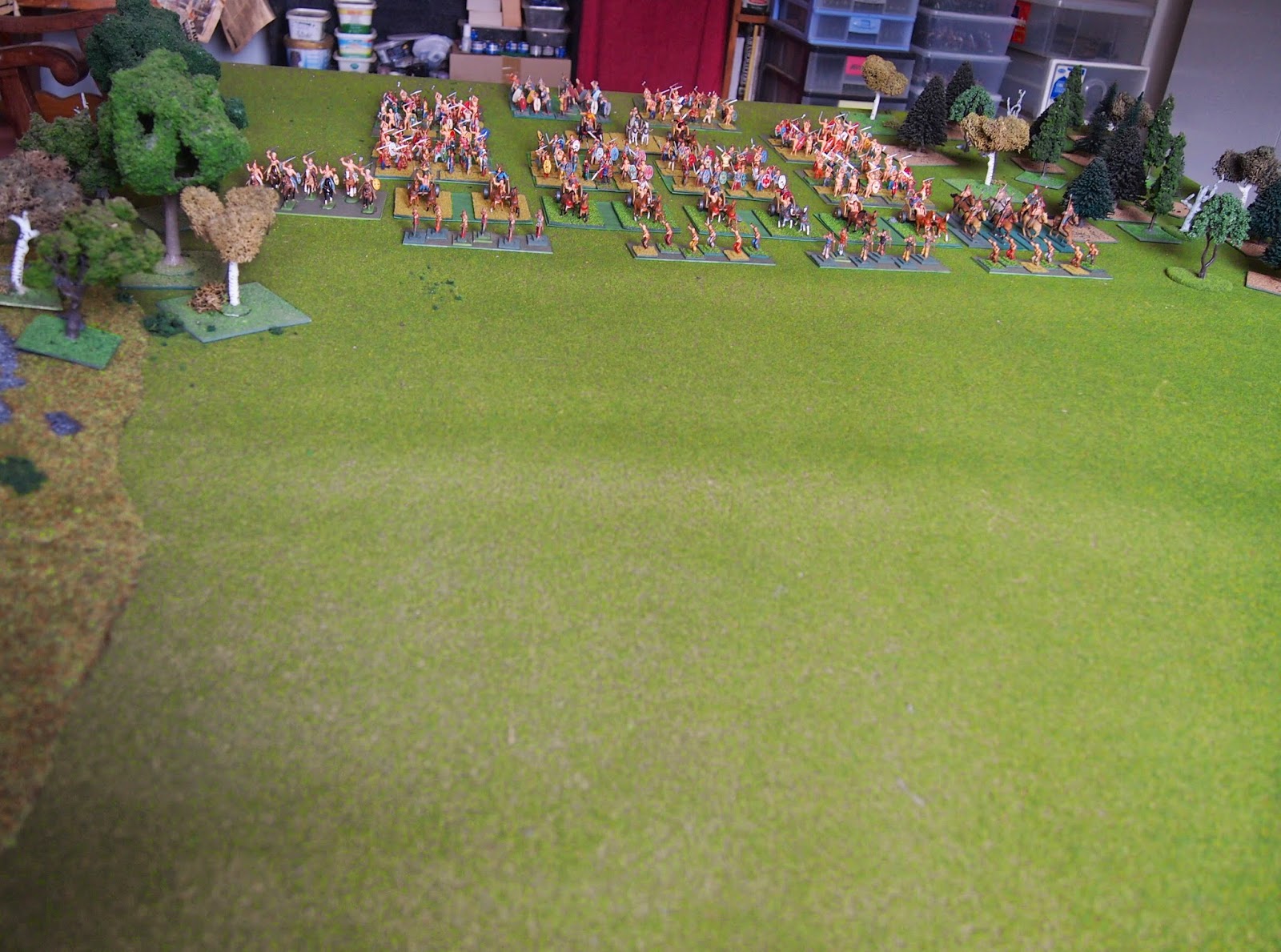 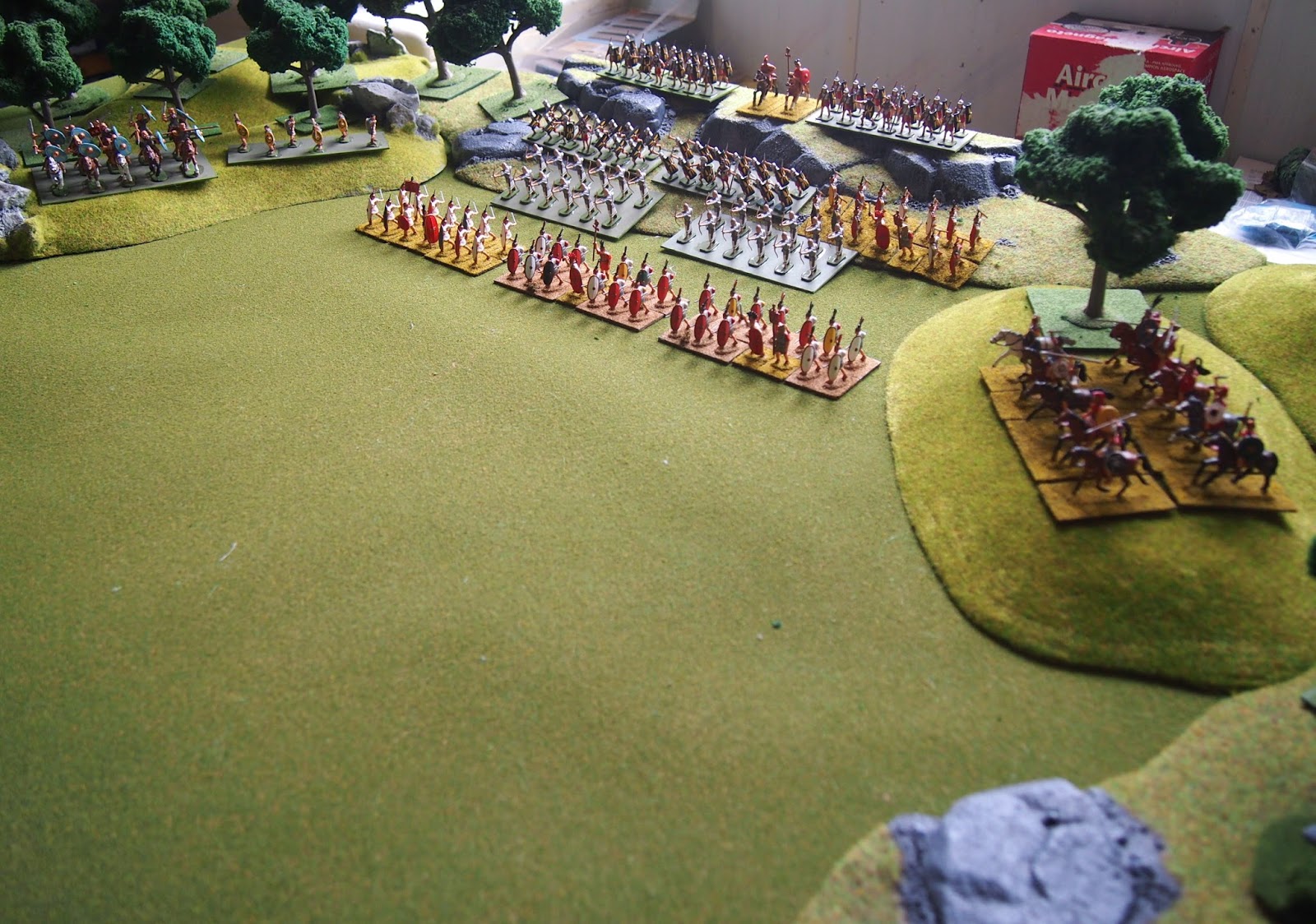 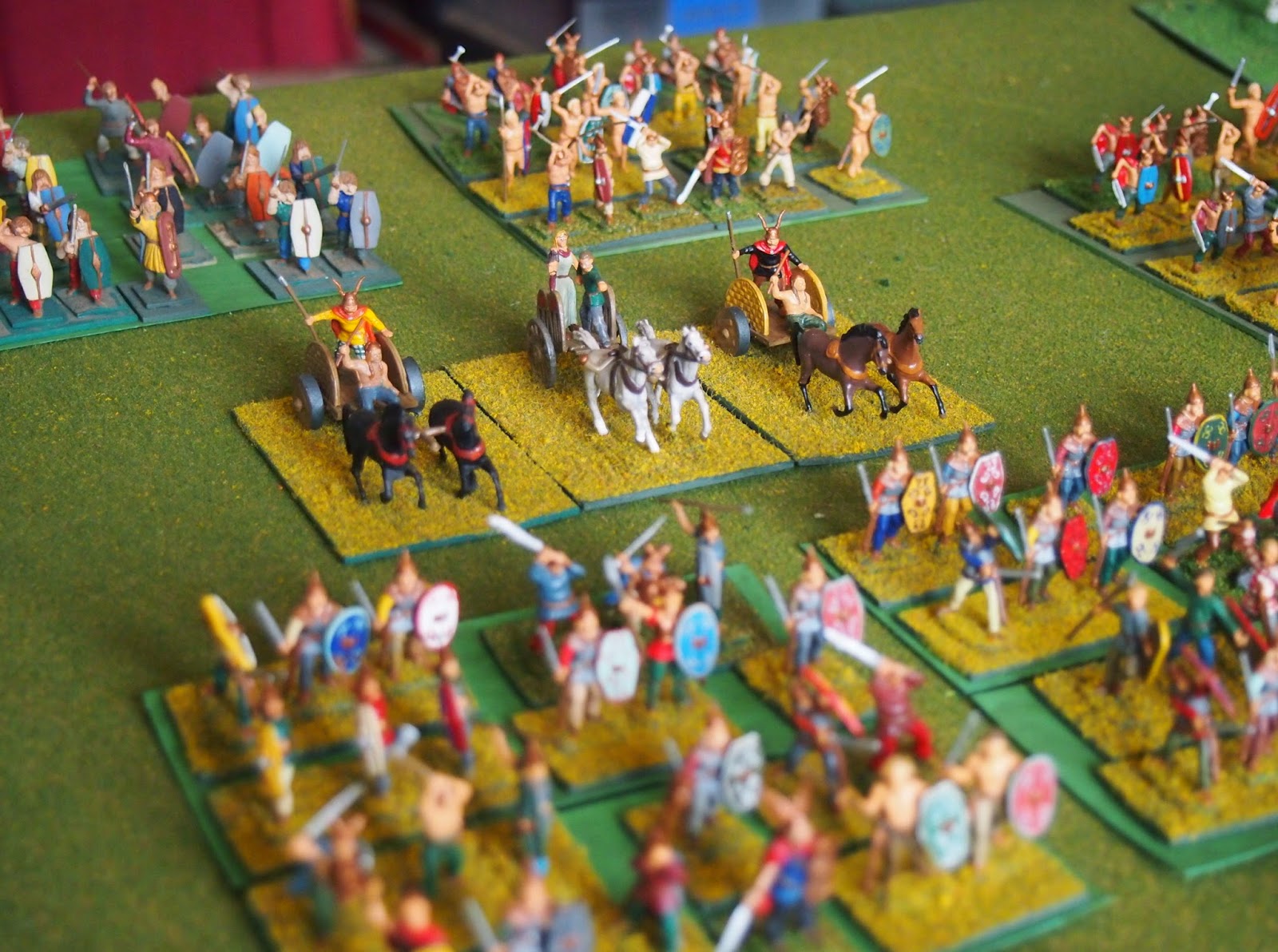 It is customary for the Britons to fight under the captaincy of a woman, but now I am avenging, not as a queen of glorious ancestry, but as a woman of the people, her liberty lost, her body tortured by the lash, the honour of her daughters tarnished. Roman greed has progressed so far that not our very persons, not age itself, nor maidenhood, were left unpolluted. Yet the gods are are on the side of our just revenge: one legion that ventured to battle has been destroyed; the rest have been skulking in their camps, or looking around for a way to escape. Now they stand before us, but they cannot face even the din of so many thousands, far less our onslaught and swords! Consider in your own hearts the forces under arms and the motives for this war, on this field we must conquer or fall. Such is the settled purpose of a woman—that men might fight and live, not be slaves! (adapted from Tacitus Book XIV: XXXV) 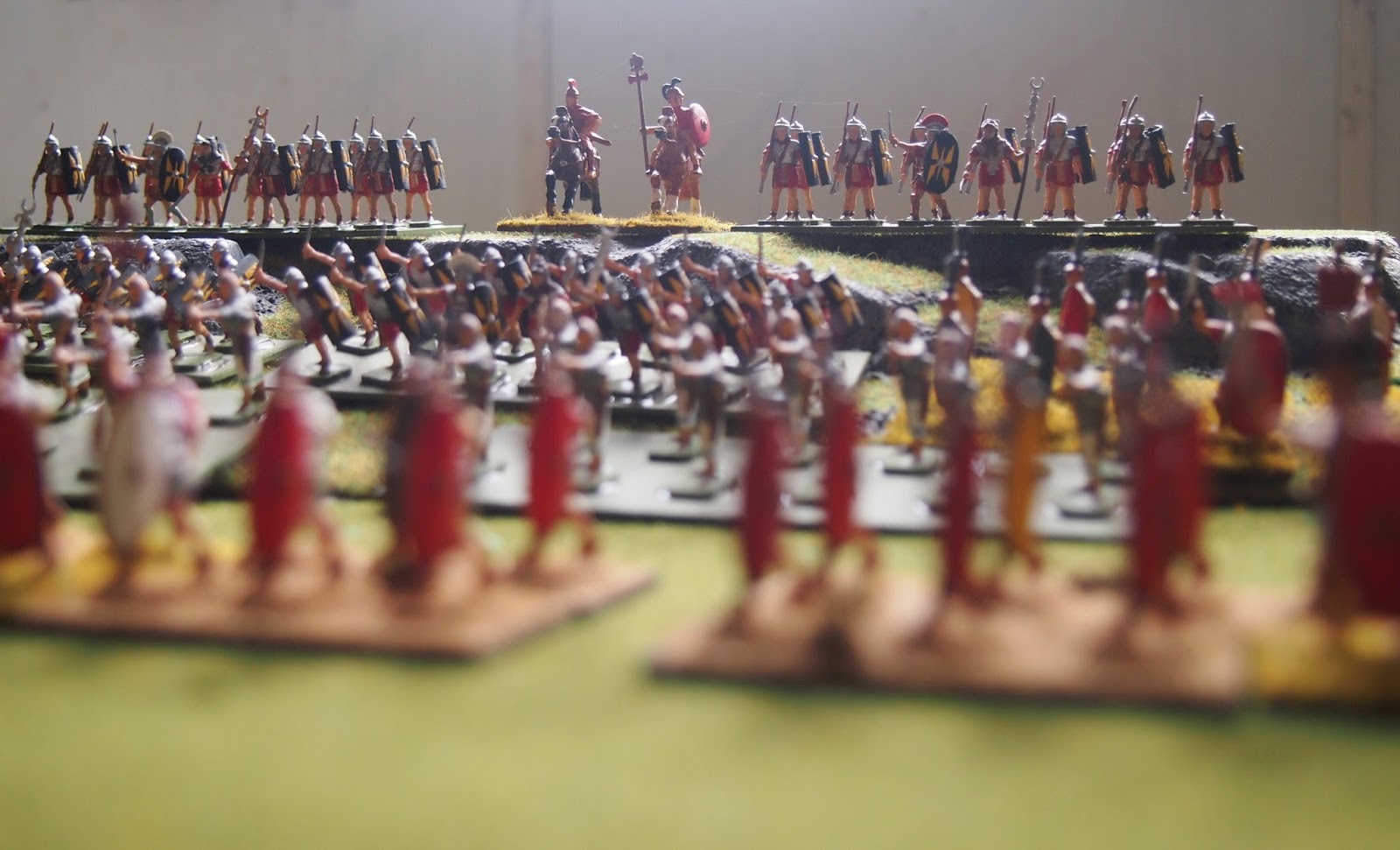 Treat with contempt the noise and empty menaces of the barbarians: in the ranks opposite, more women than soldiers meet the eye. Unwarlike and unarmed, they break immediately when, taught by so many defeats, they recognise once more the steel and valour of their conquerors. It is but a few men who decide the fate of battles; and it will be your glory that you, a handful of troops, will be gathering the laurels of an entire army. Keep your ranks close, throw your pilum and employ shield-boss and gladius; let them steadily pile up the dead. Think not of plunder. Once the victory is gained it will all be your own“ (adapted from Tacitus Book XIV: XXXVI) 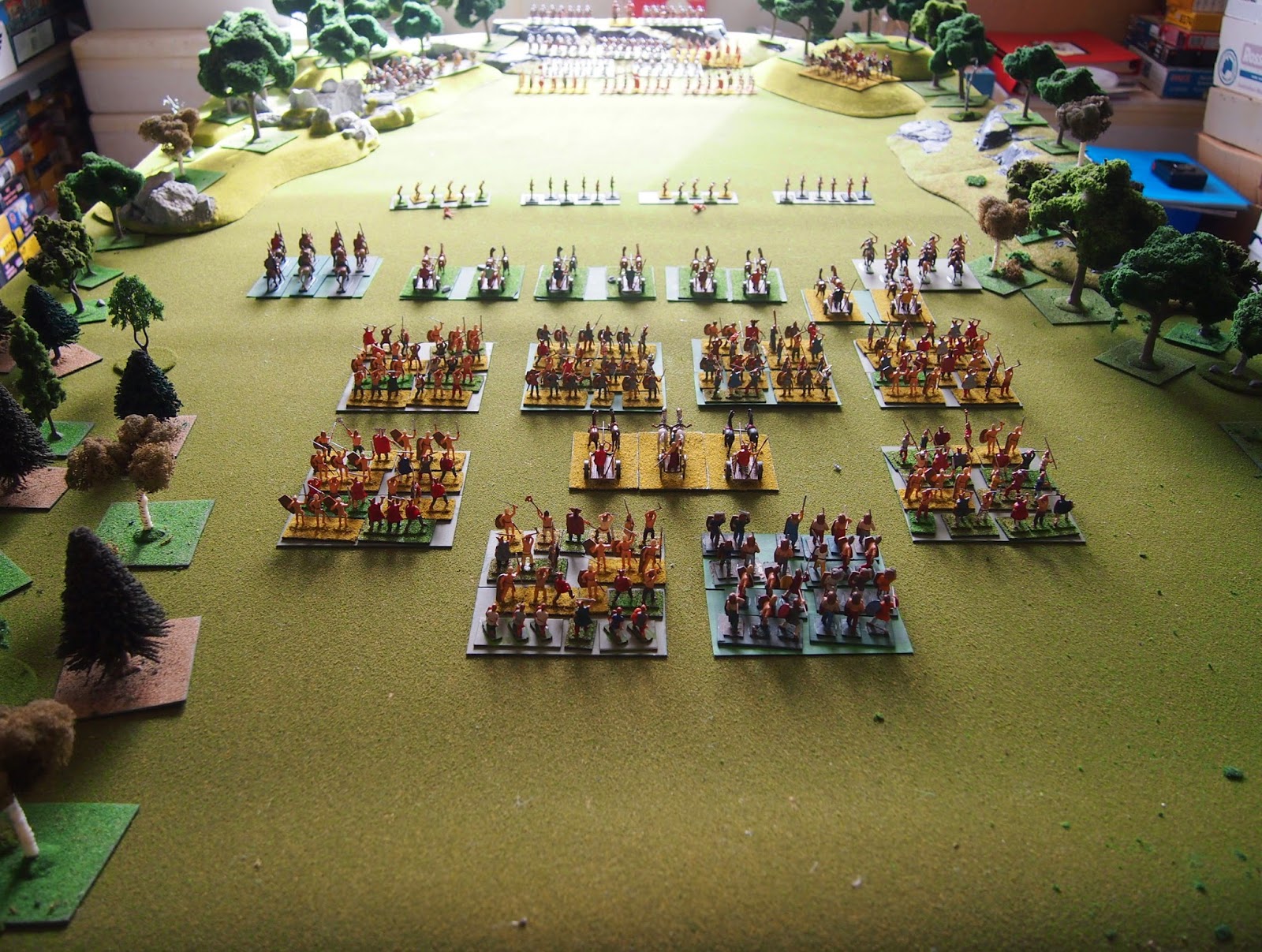 As the day’s early light dawned over the Roman position, 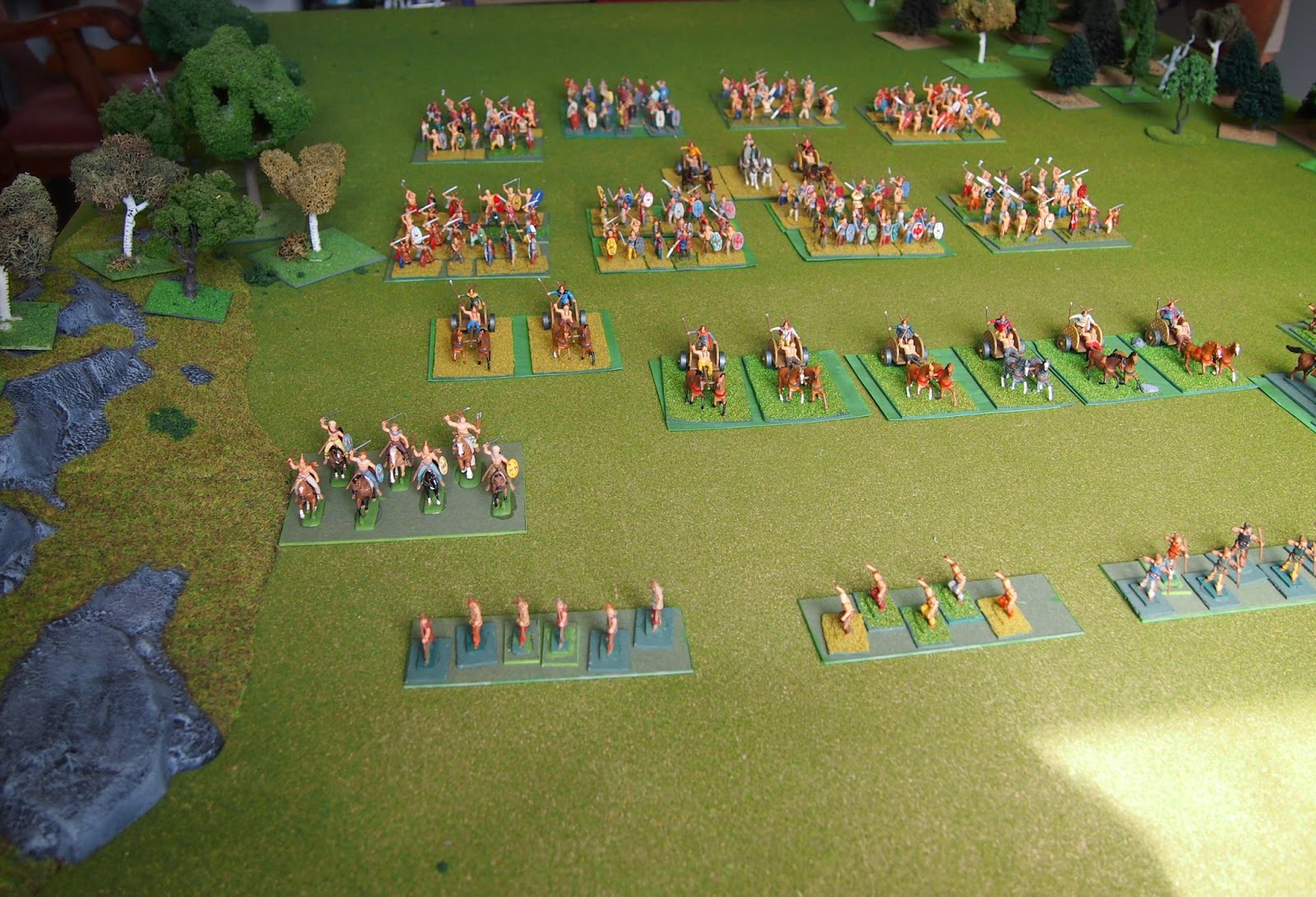 the Britons advanced to the attack.

Some ineffectual Roman bow fire had little impact on the approaching barbarian mass. 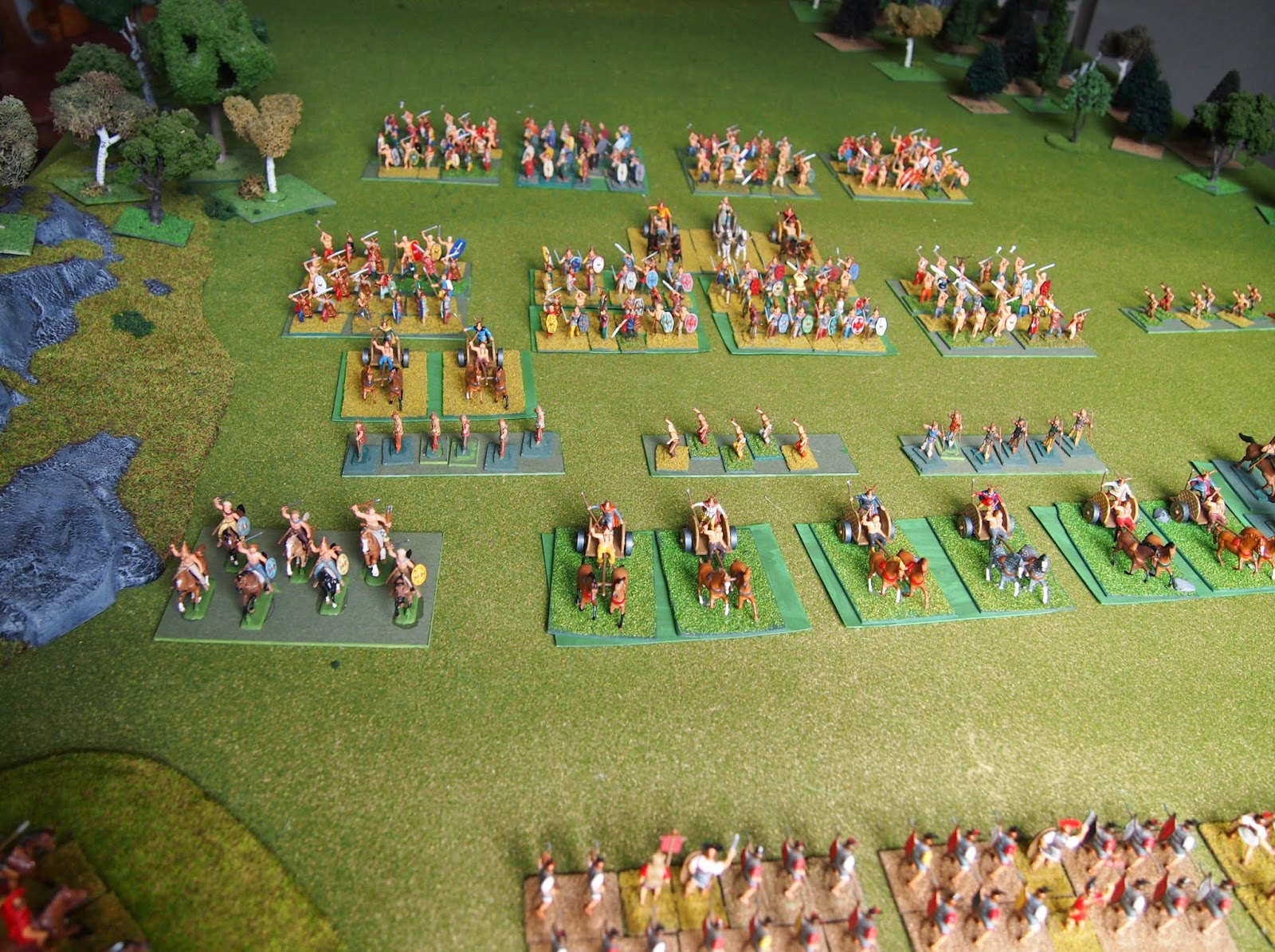 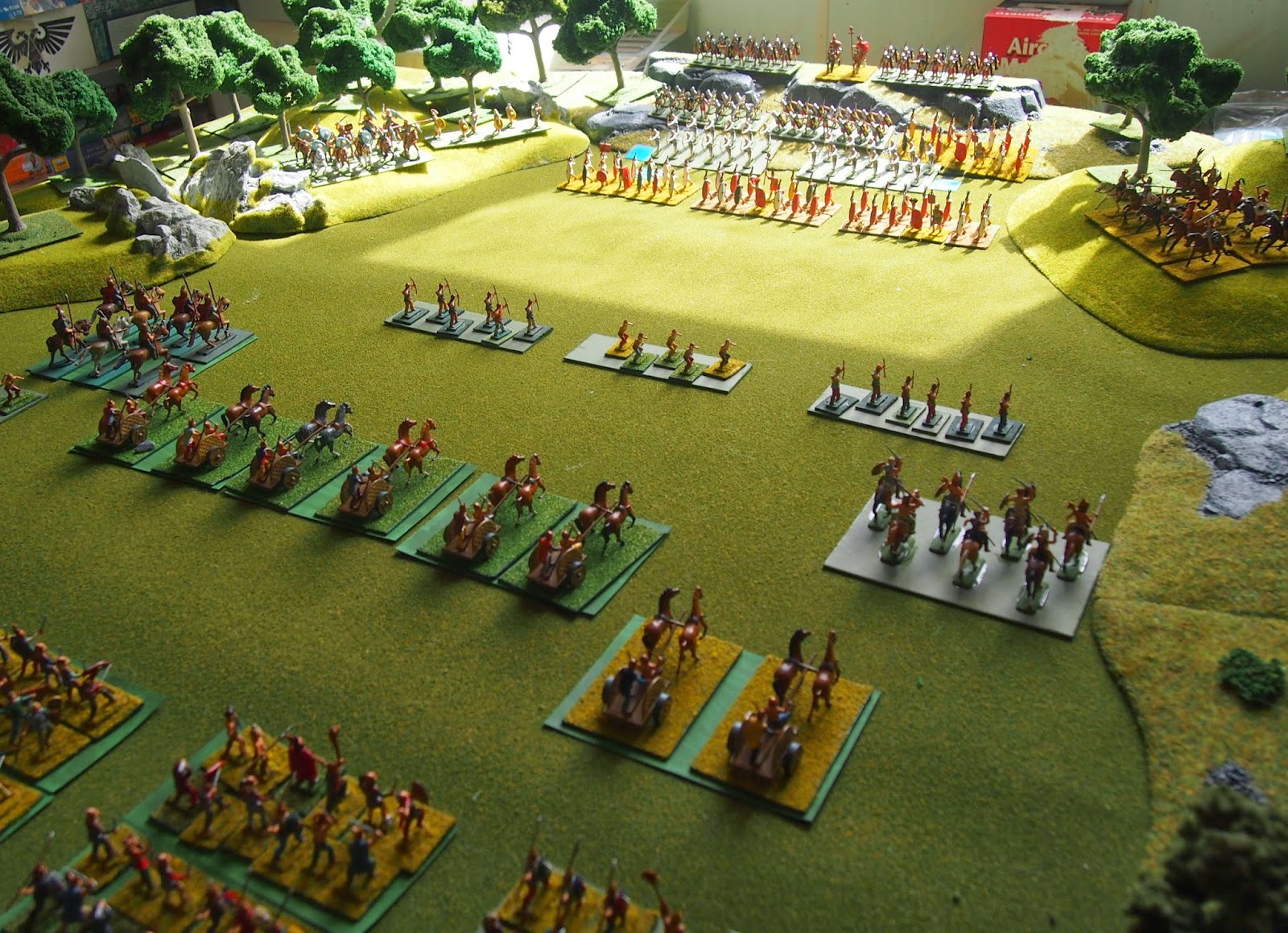 As Britons moved to close with the Roman line, Suentonius sent forward the auxillia to meet them. 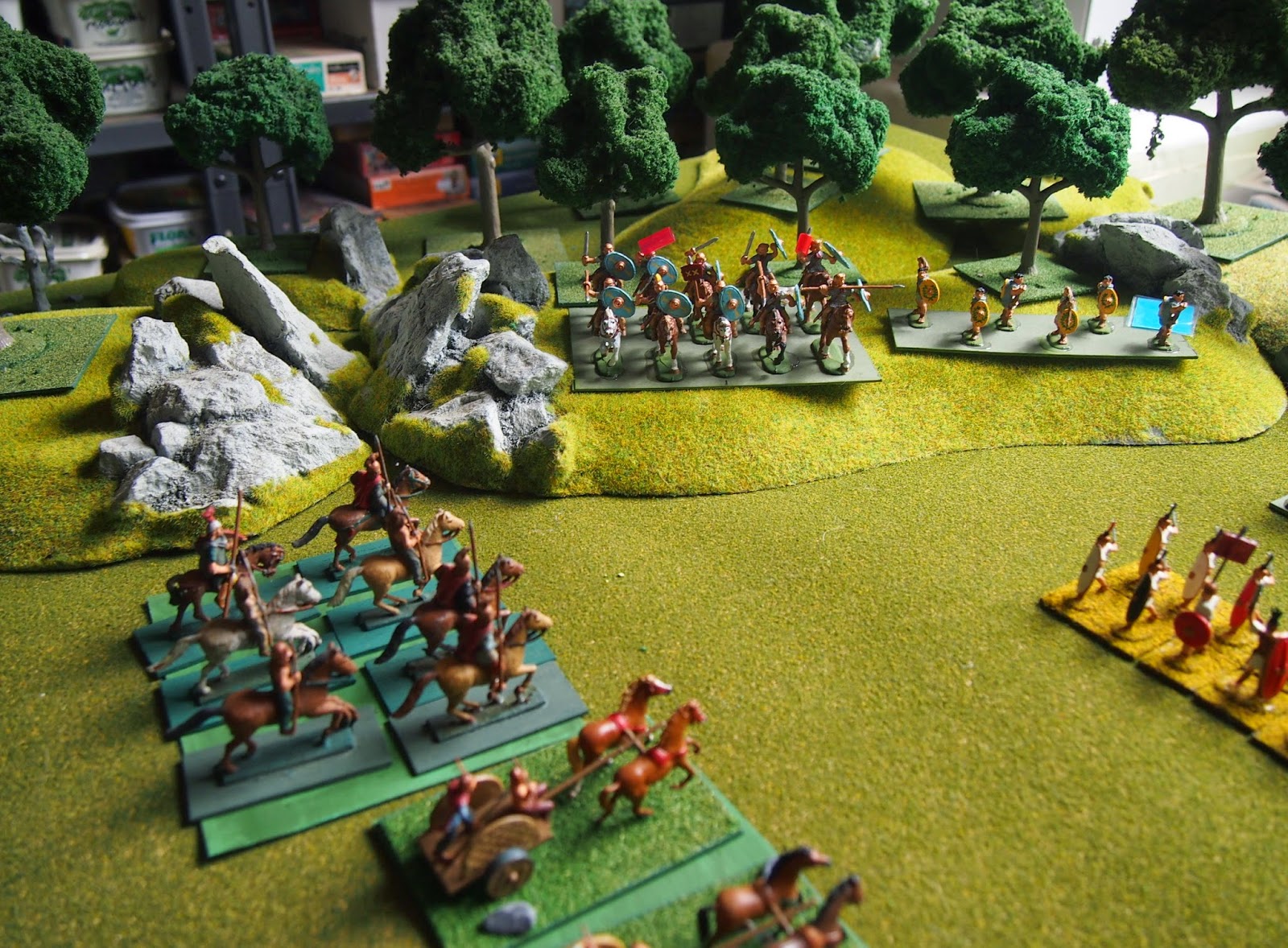 On the Roman right, the cavalry stayed safe on their hill, 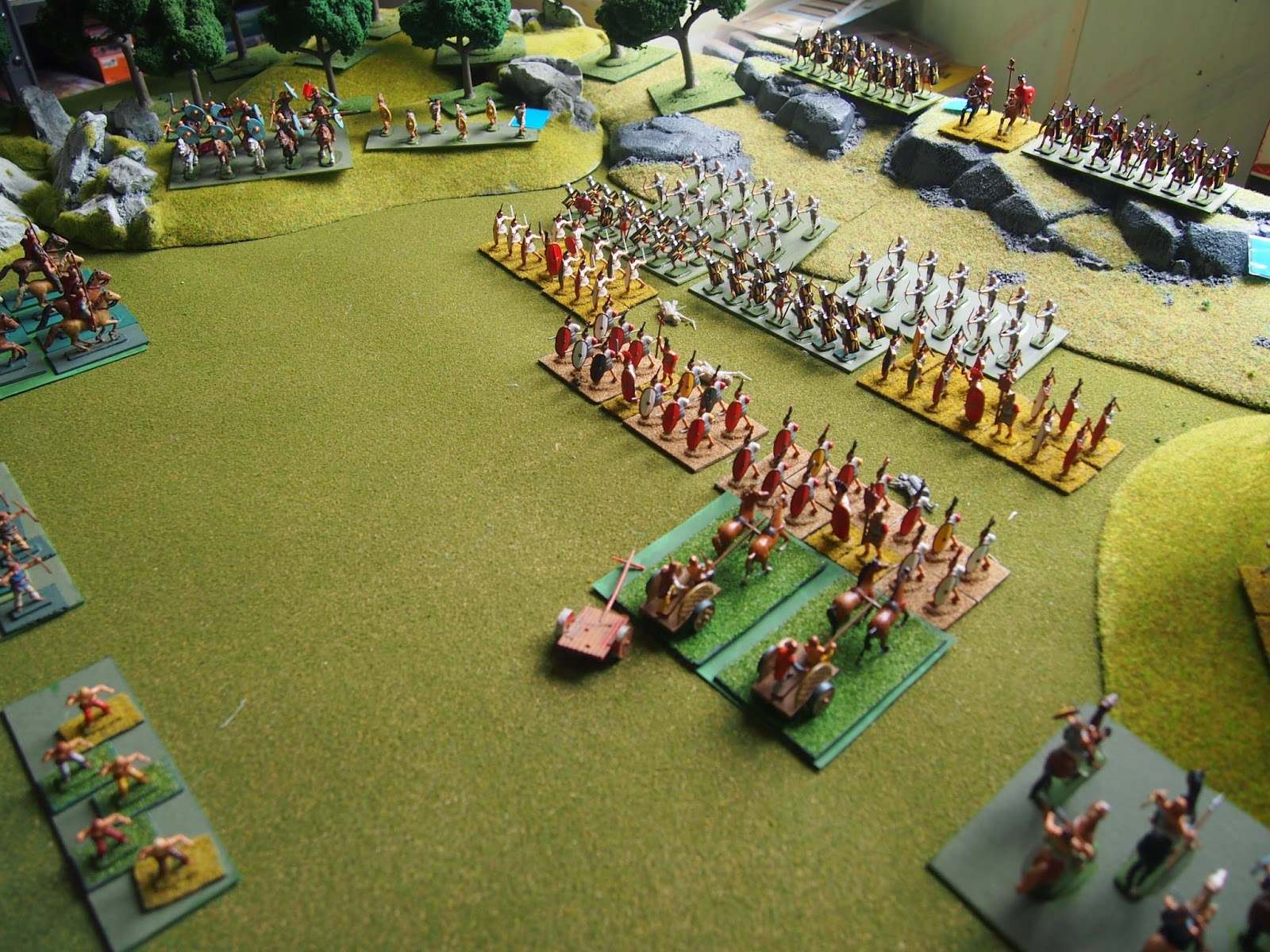 while the auxillia saw off the first of the Briton’s chariots, 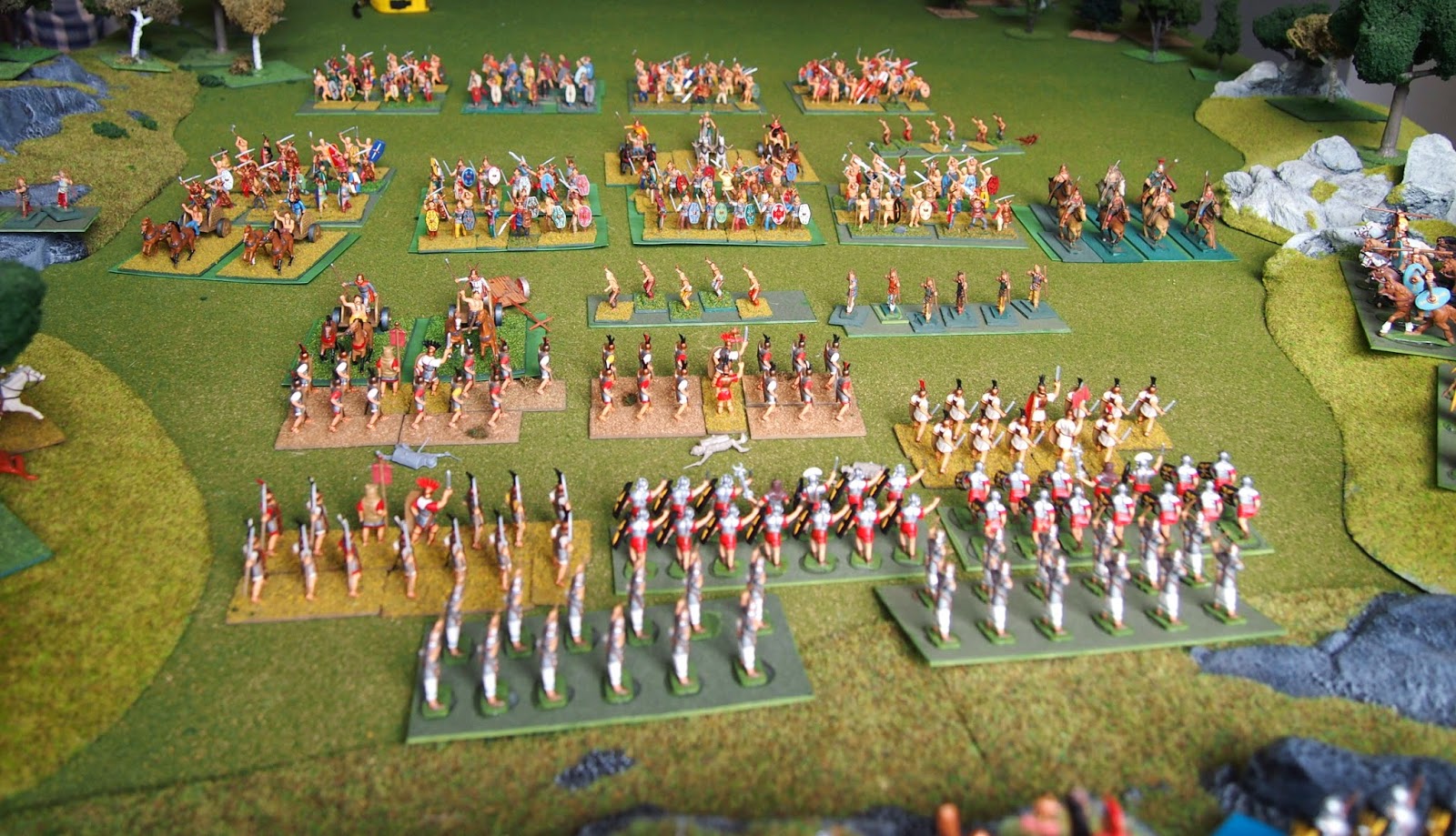 …but there were many more on the way. 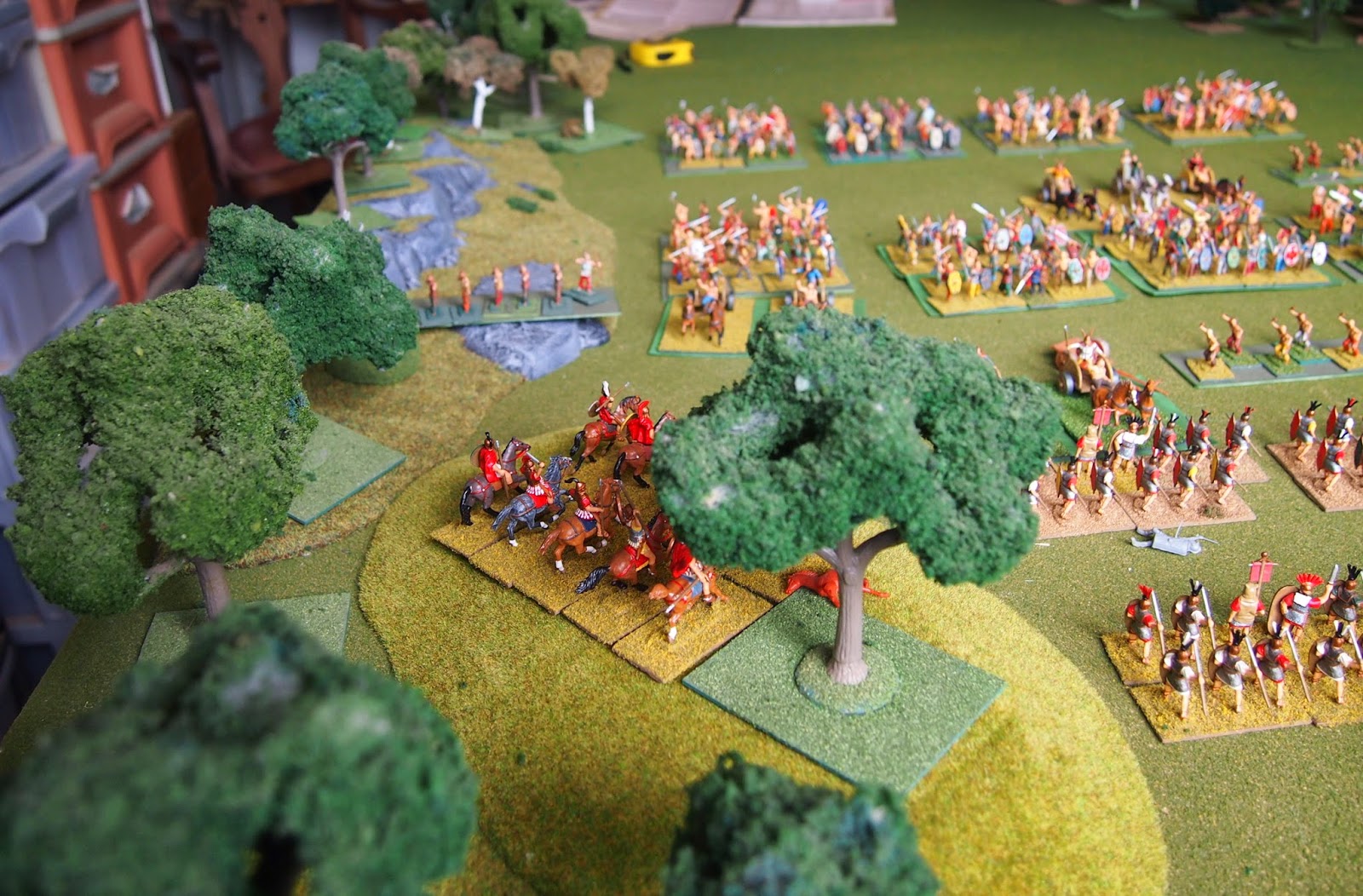 Above and below: after coming under fire from the Briton’s bows, the Roman cavalry guarding the left flank, went over to the attack. 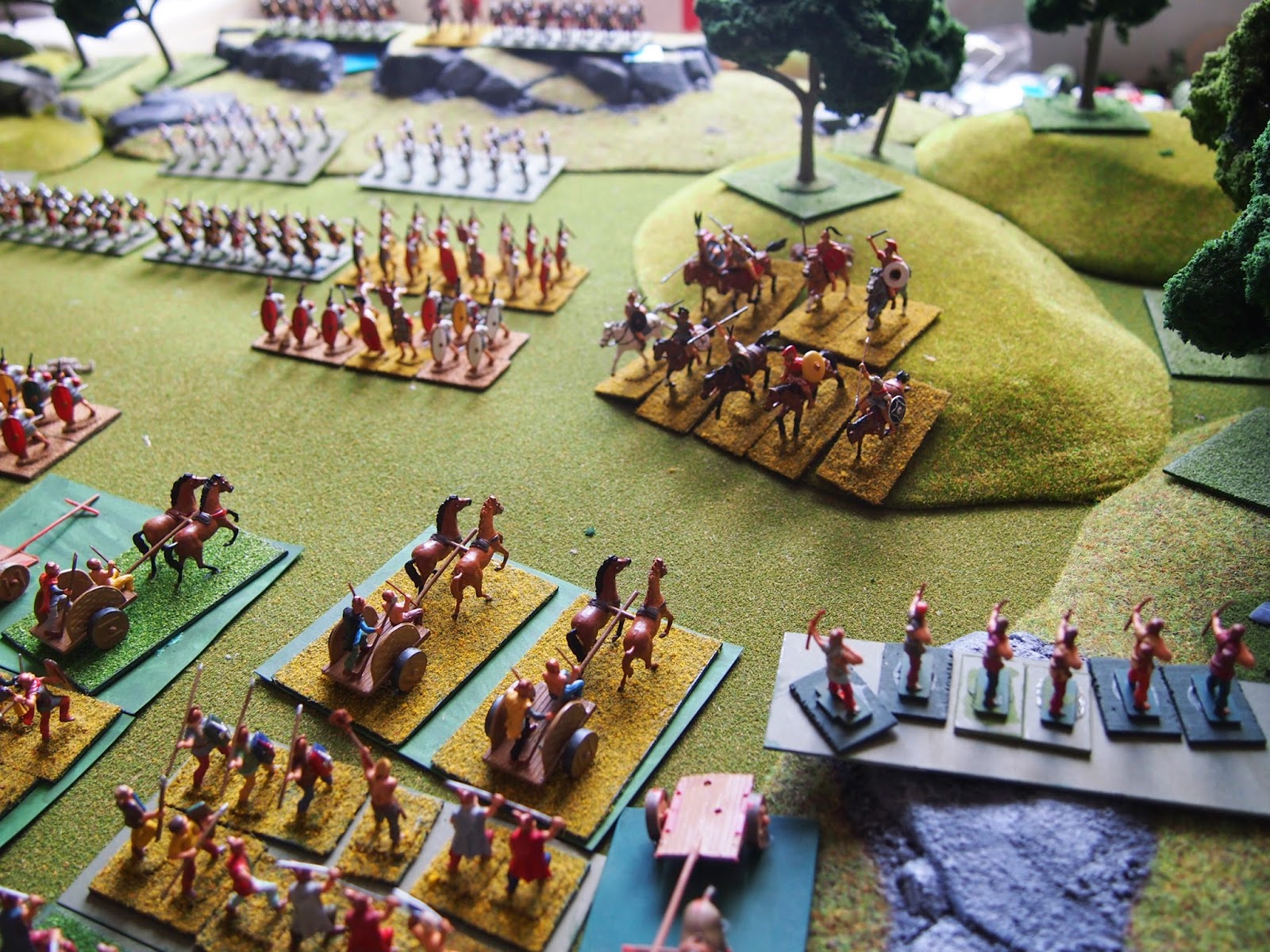 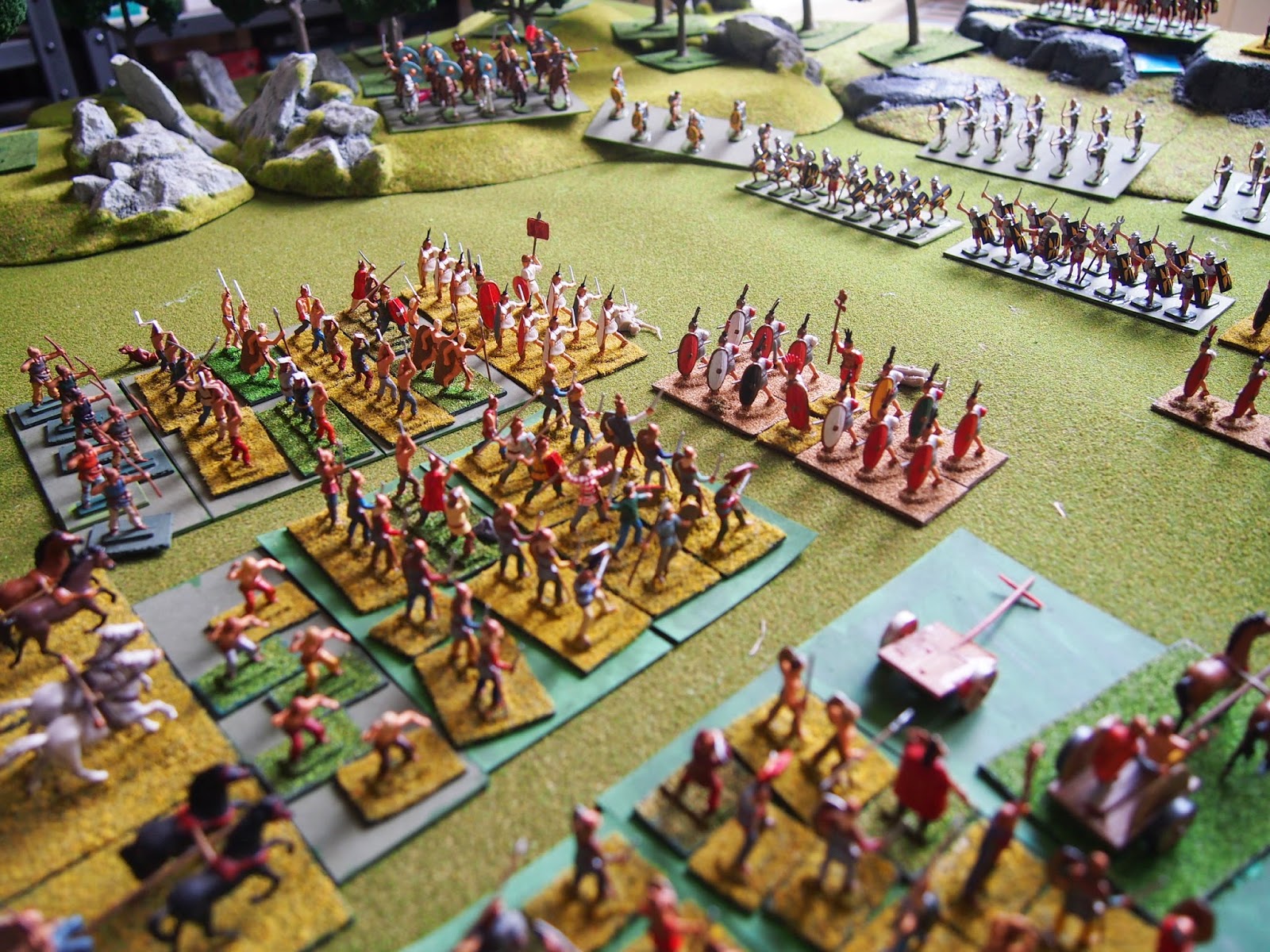 Forwards came the warbands, but so too did the Romans! 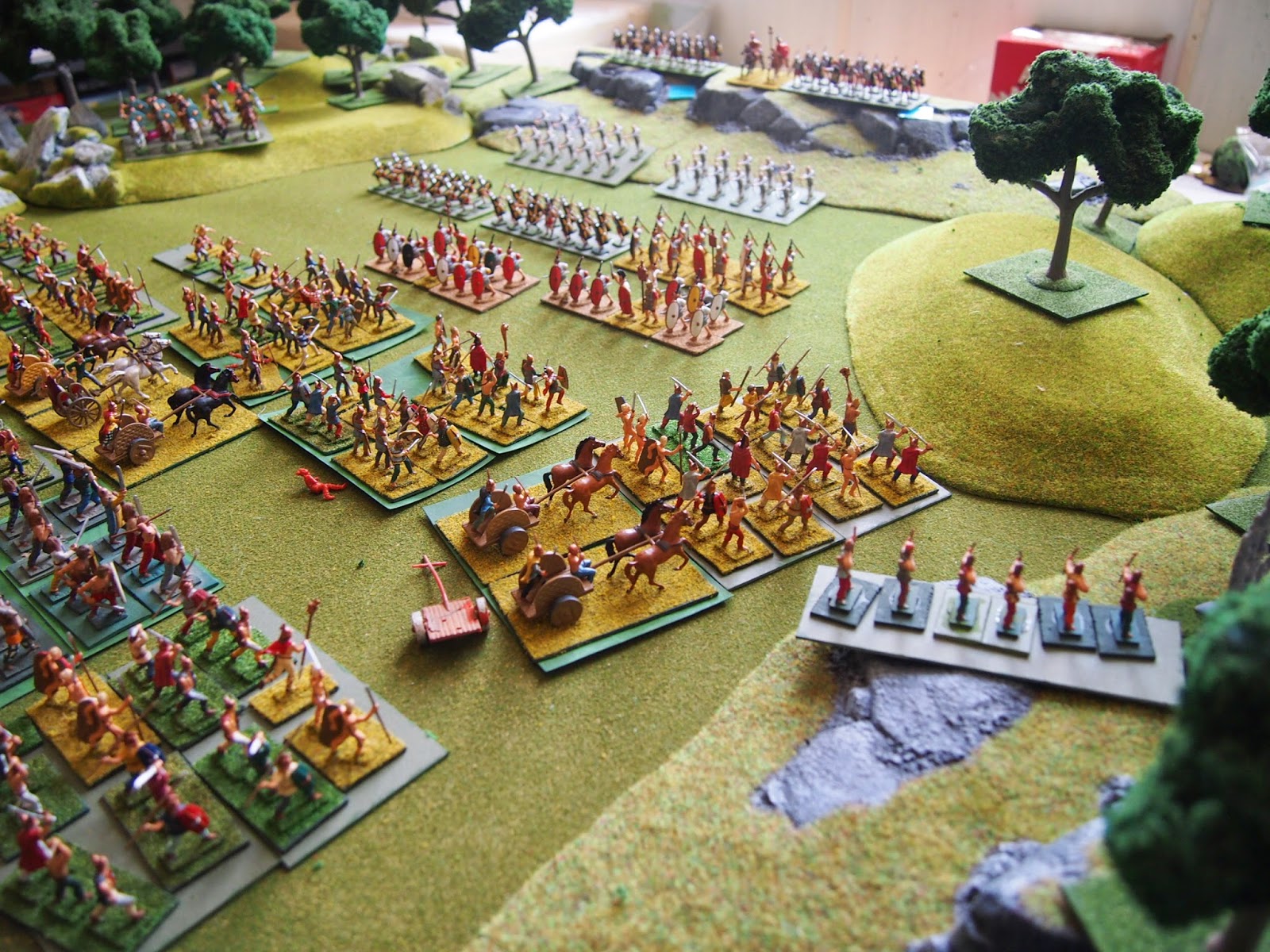 Those facing the auxillia were mainly unsuccessful, but the cavalry on the Roman left were easily dispersed. 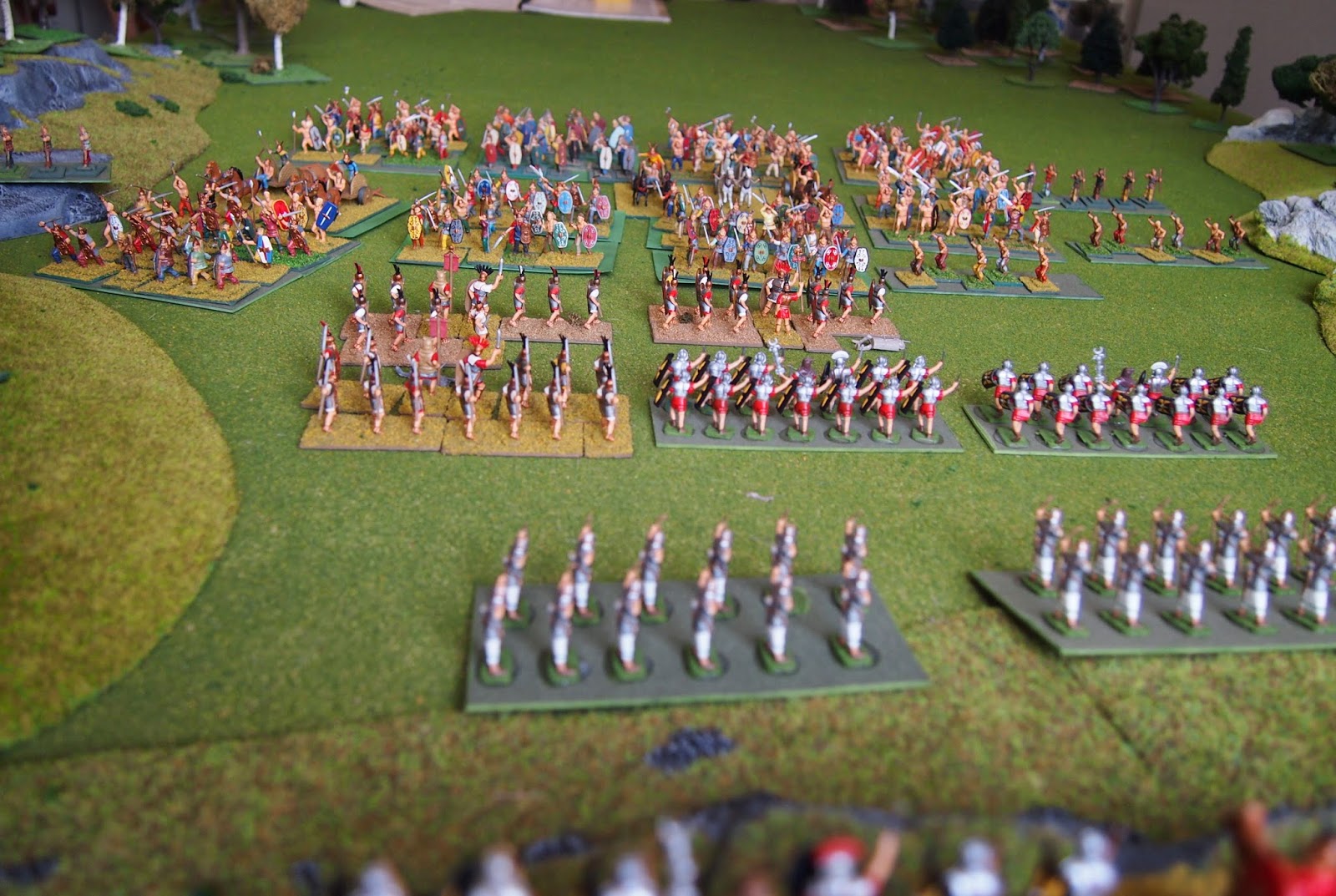 The initial attacks by her light chariots beaten back, Boudica urged her warbands to attack en masse. 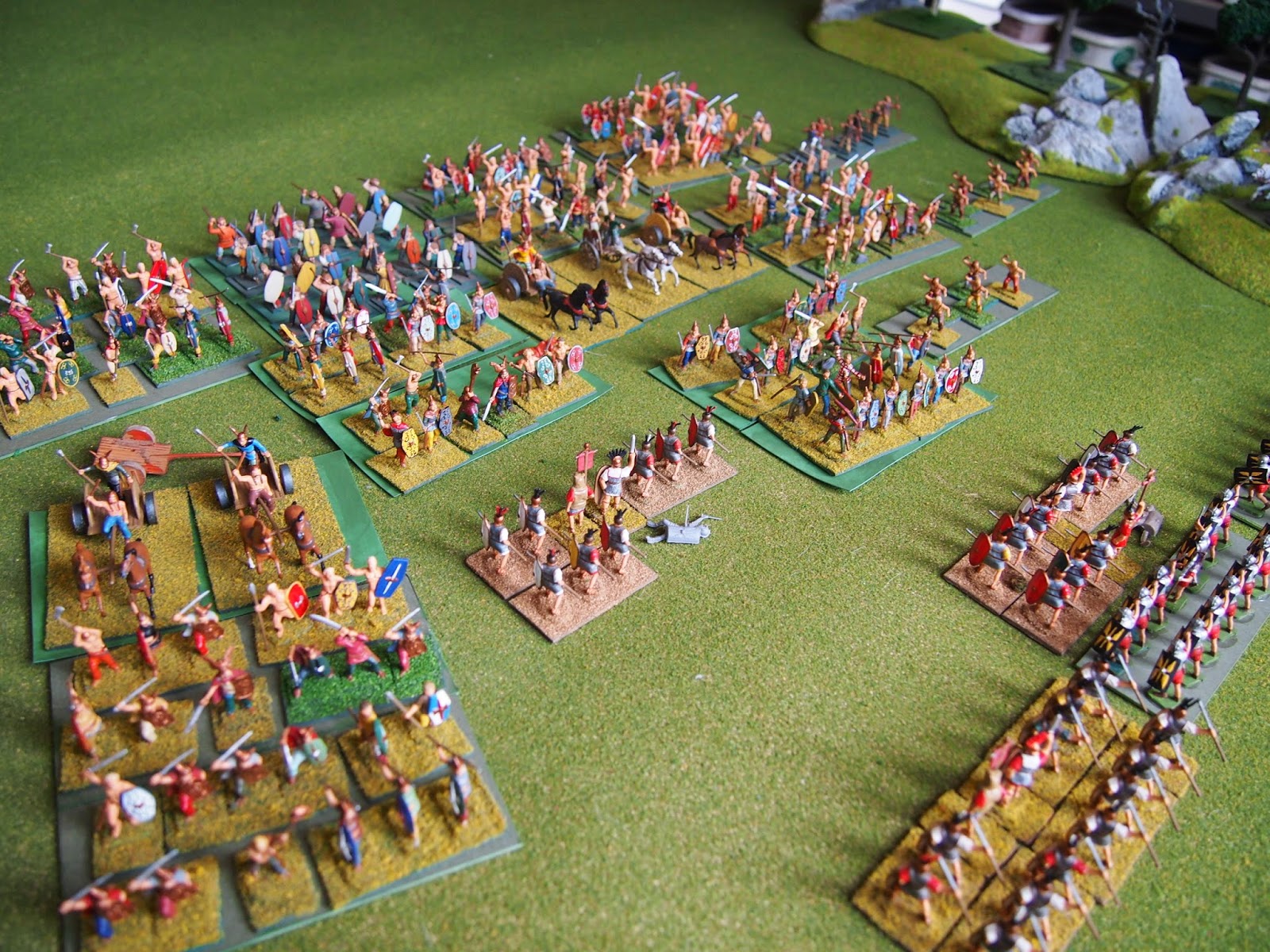 They had mixed success against the Roman auxillia. 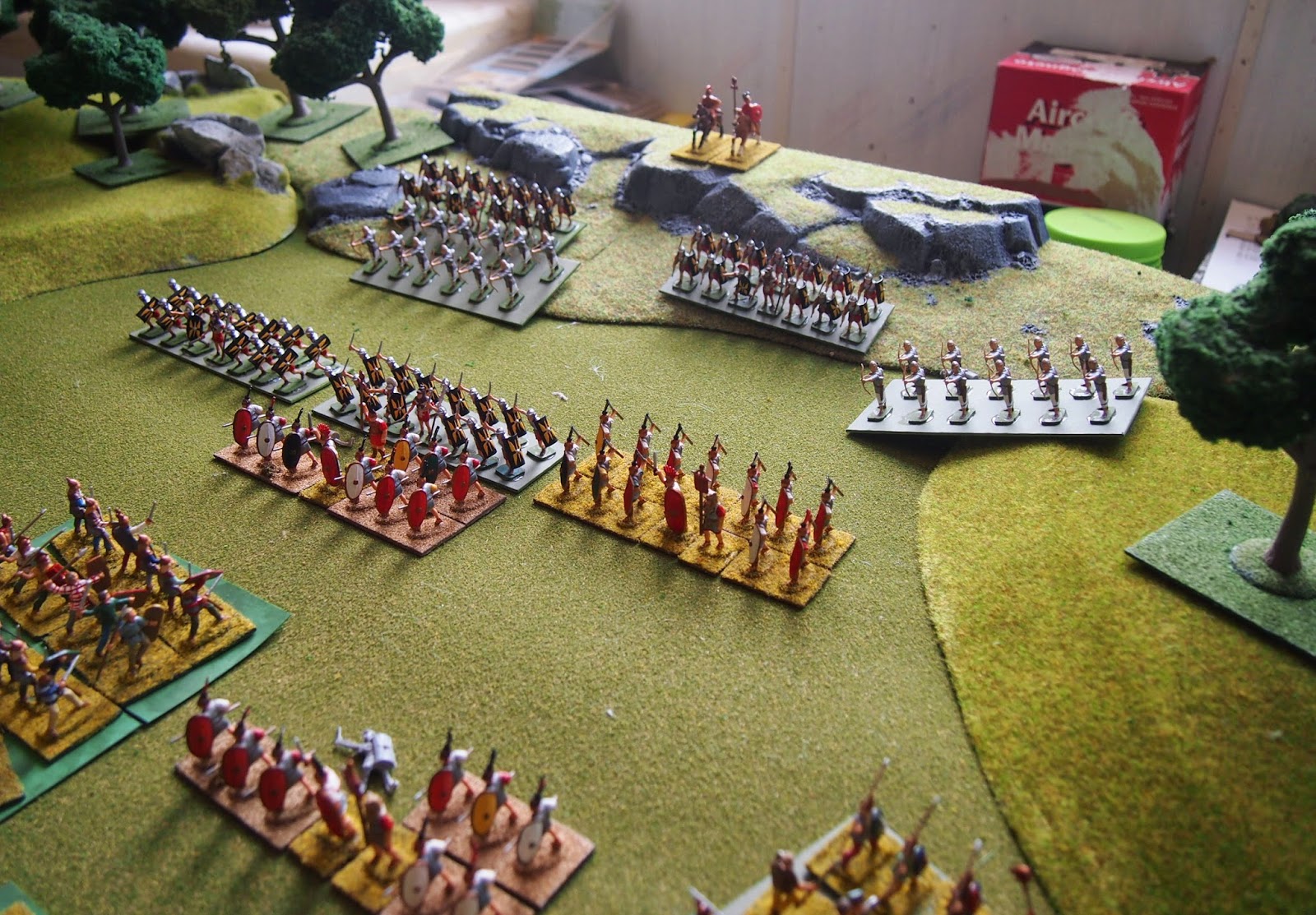 Suentonius sent the legionaries of the twentieth to support their hard-pressed auxillia brothers. 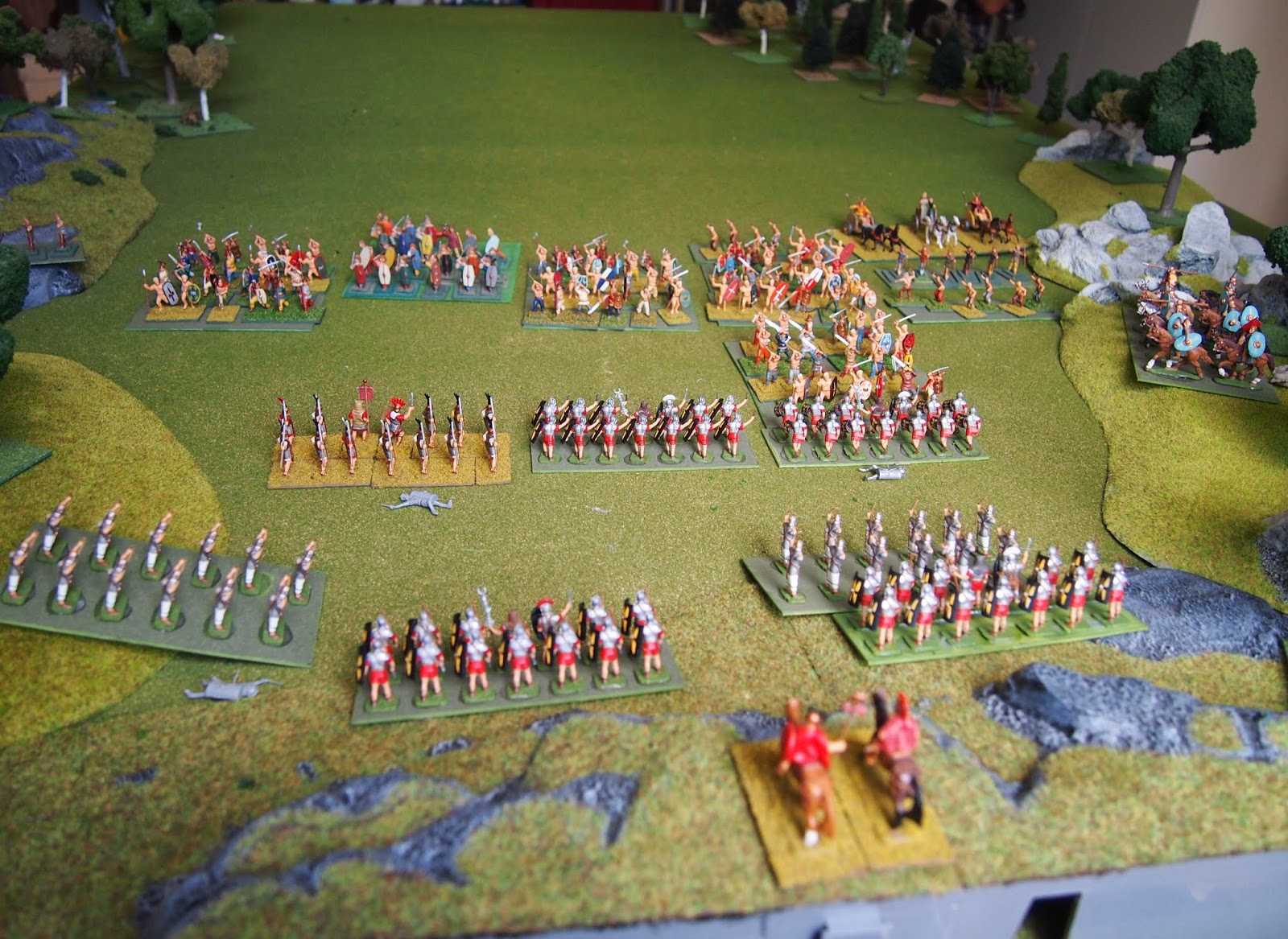 The last of the auxillia were dispersed, but the men of the XX Legion held firm.

With over half of the army slaughtered or in flight (50% demoralisation value reached), Boudica’s force turned and fled.

Mark and I played this game on 25th January, as the ANF Australia Day game for 2014. It was our second game using the Impetus rules since our original play-test. Our initial positive impression of the rules from that first outing was only enhanced by this game. They work well and suit the way that we’d like to wargame this period; larger battles based, preferably, on historical actions. Being still new to the rules and ‘rusty’ in our novel knowledge, it took us a couple of turns to remind ourselves of the mechanics, but we then got through the subsequent turns, which involved more action on the table easily and more quickly than the early ones!