Book Review: Arms and Armour of the Imperial Roman Soldier: From Marius to Commodus by Raffaele D'Amato and Graham Sumner
(Book cover art and images kindly provided by the publishers. Please do not reproduce without first obtaining permission)


I recently purchased this book through Naval and Military Press for the budget price of ~$22 AUD, including postage and packaging. Given that price and the presentation of the book—it’s a quarto size, table book with loads of pictures—one could be forgiven for thinking that this is one of those mass-produced, generic history books about the Roman army to be ‘dipped’ into every now and again. Nothing could further from the truth.
This is a well-researched, generously illustrated, academic work that is written in a clear, easy-to-read, descriptive manner. It is packed with information and detail that is logically and clearly presented, with frequent referencing and cross-referencing.
The book is divided into two parts, covering the late republican (112–30 BC) and early imperial (30 BC–AD 192) eras. Each is preceded by a descriptive timeline and the whole is supported by detailed chapter notes, bibliography and glossary. It is lavishly illustrated throughout; with extra lavish! Images come from three As:
These are not mere eye-candy, but are an integral part of the book that are used in every paragraph to describe the arms and armour of the Roman soldier in the late republican and early imperial era.
The images provide evidence for each statement D’Amato makes and for his overall thesis, that modern interpretations of the Roman soldier have simplified and standardised their arms and armour into categories of ‘uniform’. He argues, lucidly and with reference to the available sources from the era, that the opposite was the case. Roman soldiers were armed and clothed from local sources and influences, their equipment (all of which was hand-made) was not standardised and was utilised by many generations of soldiers. He considers that “the ancient literary sources and their description of equipment are highly reliable against modern concepts that try to deny them” (p. xiii).
What results is a presentation of the arms and armour of a Roman soldier that is similar to the common, modern representation, but with important differences and much, much more variety. There was, according to D’Amato much greater use of natural materials; felt, linen and leather, plenty of leather.
One example is the figure on the front cover, which is in the book as Plate III. This is a representation of Valerius Crispus a (miles) legionary of Legio VIII Augusta. The detailed caption that accompanies this plate describes the image and the sources that have been used in its construction (as is the case with each of the plates in the book). Interestingly, as Mark pointed out to me when I showed him the book, this is exactly the manner in which the Airfix Romans are moulded, so perhaps they are not as inaccurate as some believe (http://www.plasticsoldierreview.com/Review.aspx?id=610)?
Even the presentation of a beneficiarius (soldier exempt from menial duties) in the familiar lorica segmenta (Plate VI) is not entirely as we have become accustomed to seeing Roman soldiers of the Trajanic period. While the lorica is the familiar laminate armour, it is illustrated with leather lining to each segment, “…as shown on the Great Trajanic Frieze” (p. 118), rather than the all-metal representation that is more commonly represented in modern interpretations. This is but one style of dress and arming Roman soldiers, even at this period of the empire, and D’Amato describes the wide variety of options, with reference to contemporary sources, including the Great Trajanic Frieze.

Such ‘controversial’ interpretations are based on D’Amato’s detailed research. Throughout the book his rationale is clearly explained and the photographs or drawings of the evidence are presented so that the reader can check for himself, weigh up against other evidence he may posses and decide on the voracity or otherwise.
This marvellous book, covering the period from Marius to Commodus, is to be the first of three volumes. The second will cover the period from Commodus to Justinian, and third and final volume will go back to the period from Romulus to Marius. One can only hope that they will be published as planned as, if they are up to the standard of this volume, they will be compulsory reading for anyone interested in the military of the Roman empire.
This is one ‘table book’ that I will be ‘dipping’ into frequently as I seek to increase my knowledge of this fascinating period of history and about a military force that captures the imagination of most wargamers, and many others besides!
Rating 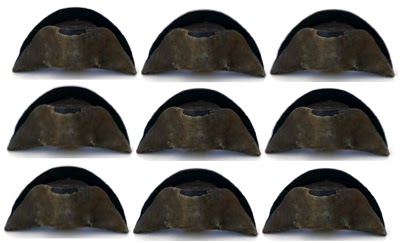