A change of scene and scale last night saw me at the Napoleonic Wargaming Society playing another version of Quatre Bras—one cannot have too many Quatres Bras, especially in the year of the bicentennial—with some of our good friends (and members of the ANF 'family'!).

Mark 'Sun of York' (aka 'Marc') had designed the scenario based on the one presented in the Napoleon's Battles v2 book. He also hand painted the terrain which looked absolutely marvellous.

I joined Mark B in taking the French while Stephen had command of the Anglo-Allied defenders.

I'll only be giving you a taste of the game here as Mark has posted a fine, full report on his blog, One Sided Miniature Wargaming Discourse (in addition to one of an earlier version that he completed solo).

At first it seemed that the Nassauers, Dutch and Belgian were going to emulate the determined stand that they put on in our version (and historically). Note the '8' beside the 2nd Nassau compared with the '3' beside the French and the little blue 'disordered' marker! 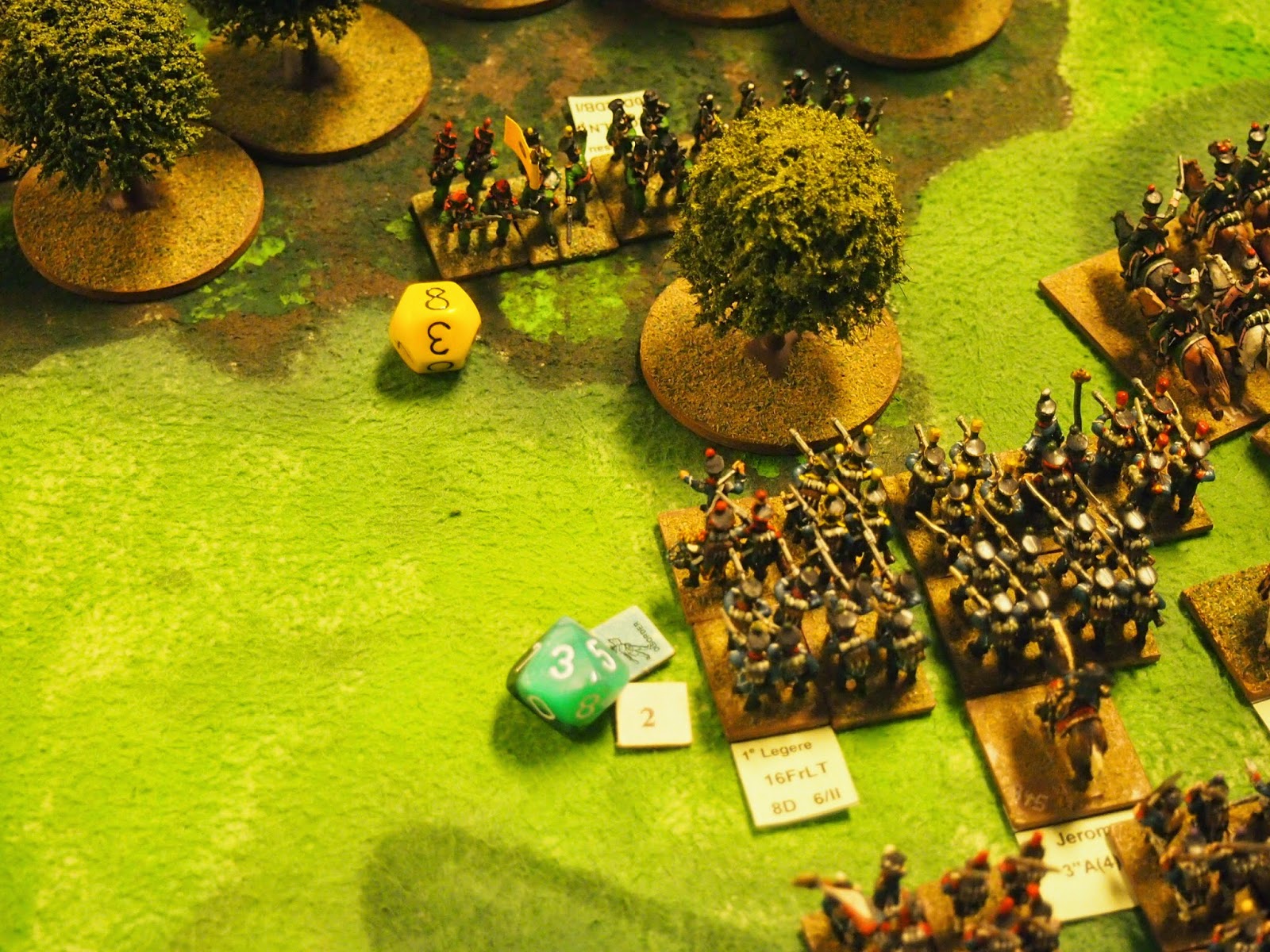 Surely though, the overwhelming numbers could be made to tell? 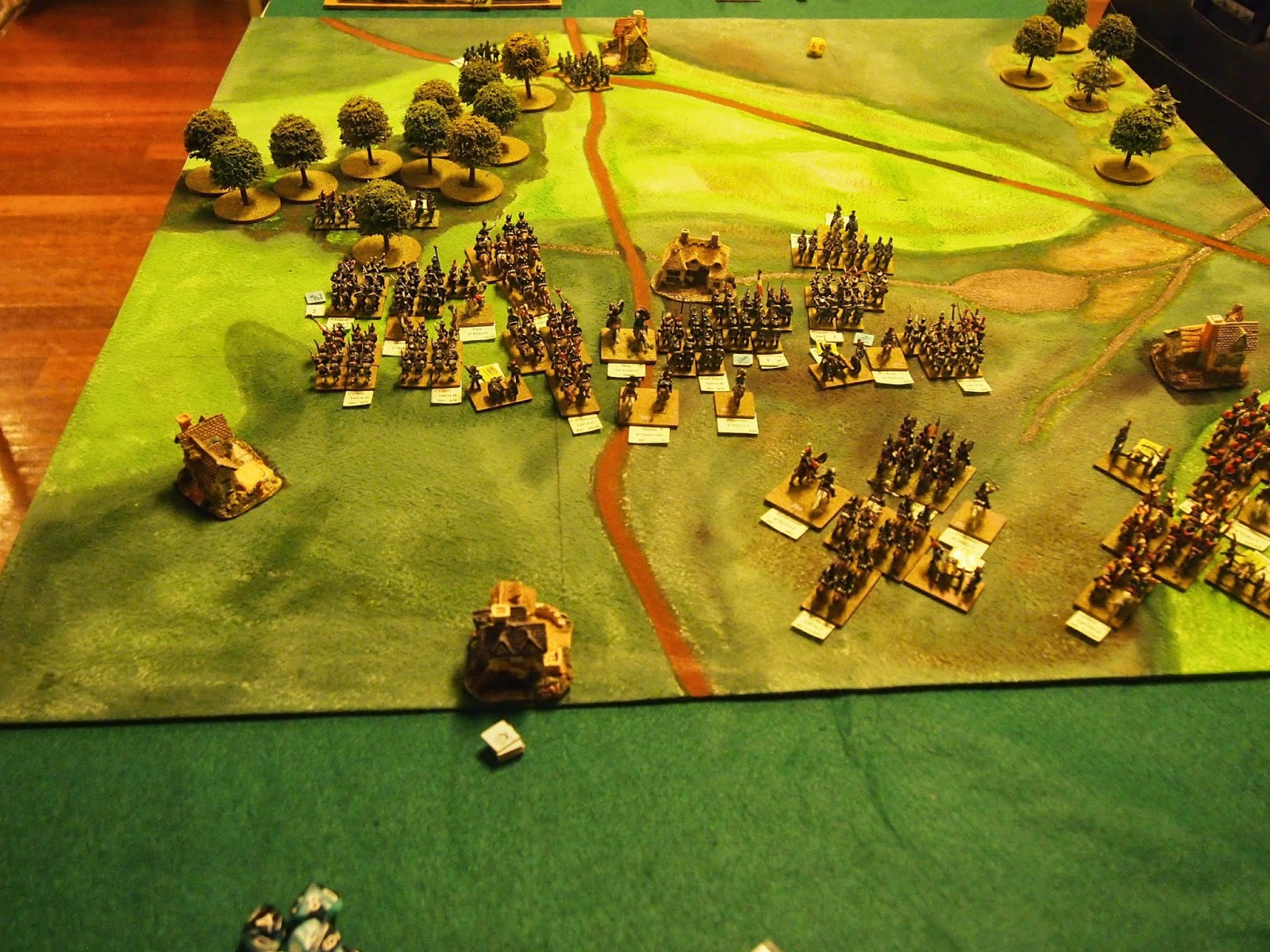 Yes they can, thanks to a mighty attack lead by the Prince of Moscow himself! 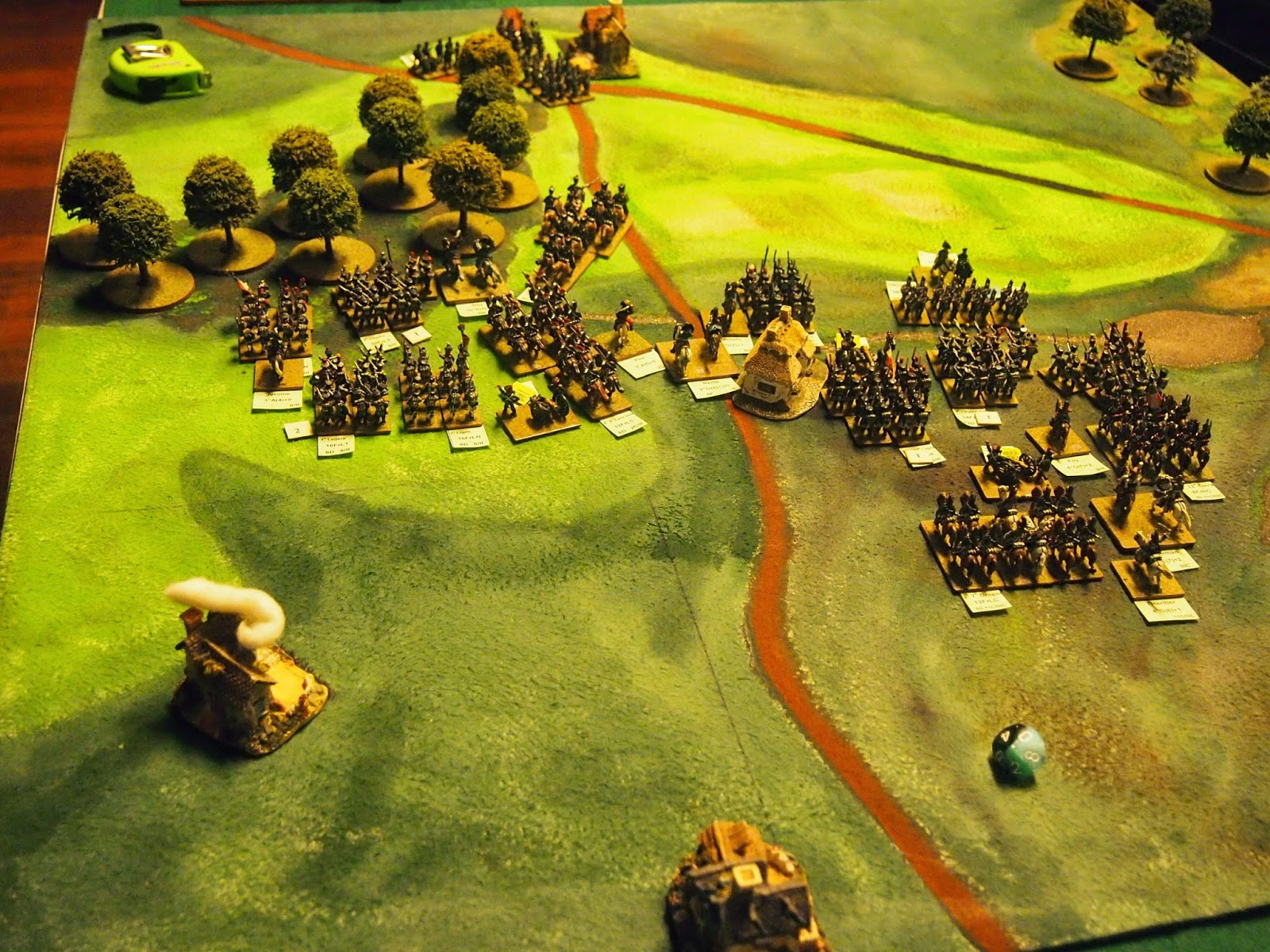 In fact, all the way to the other end of the table, where an(other) almighty mêlée occurred 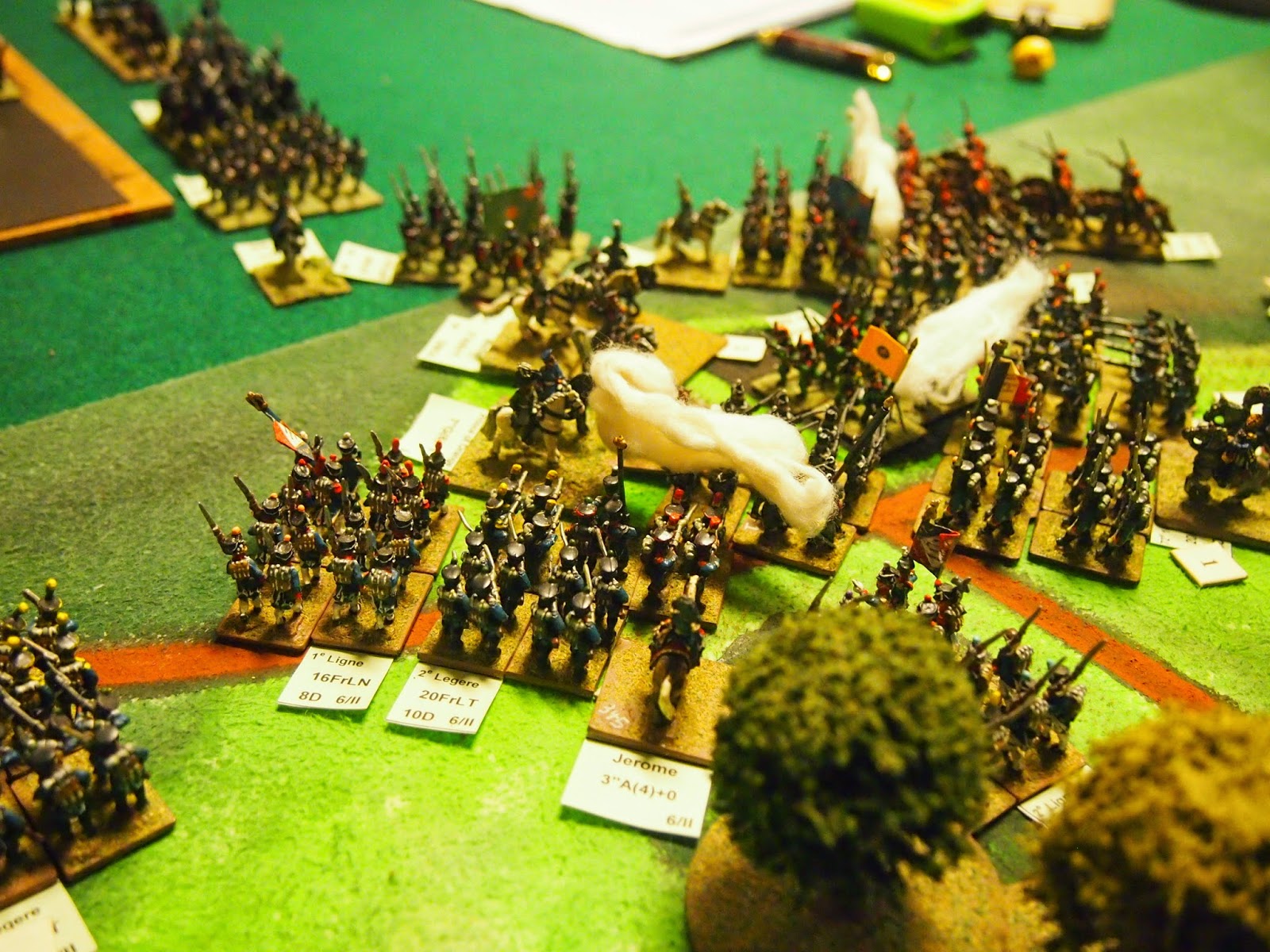 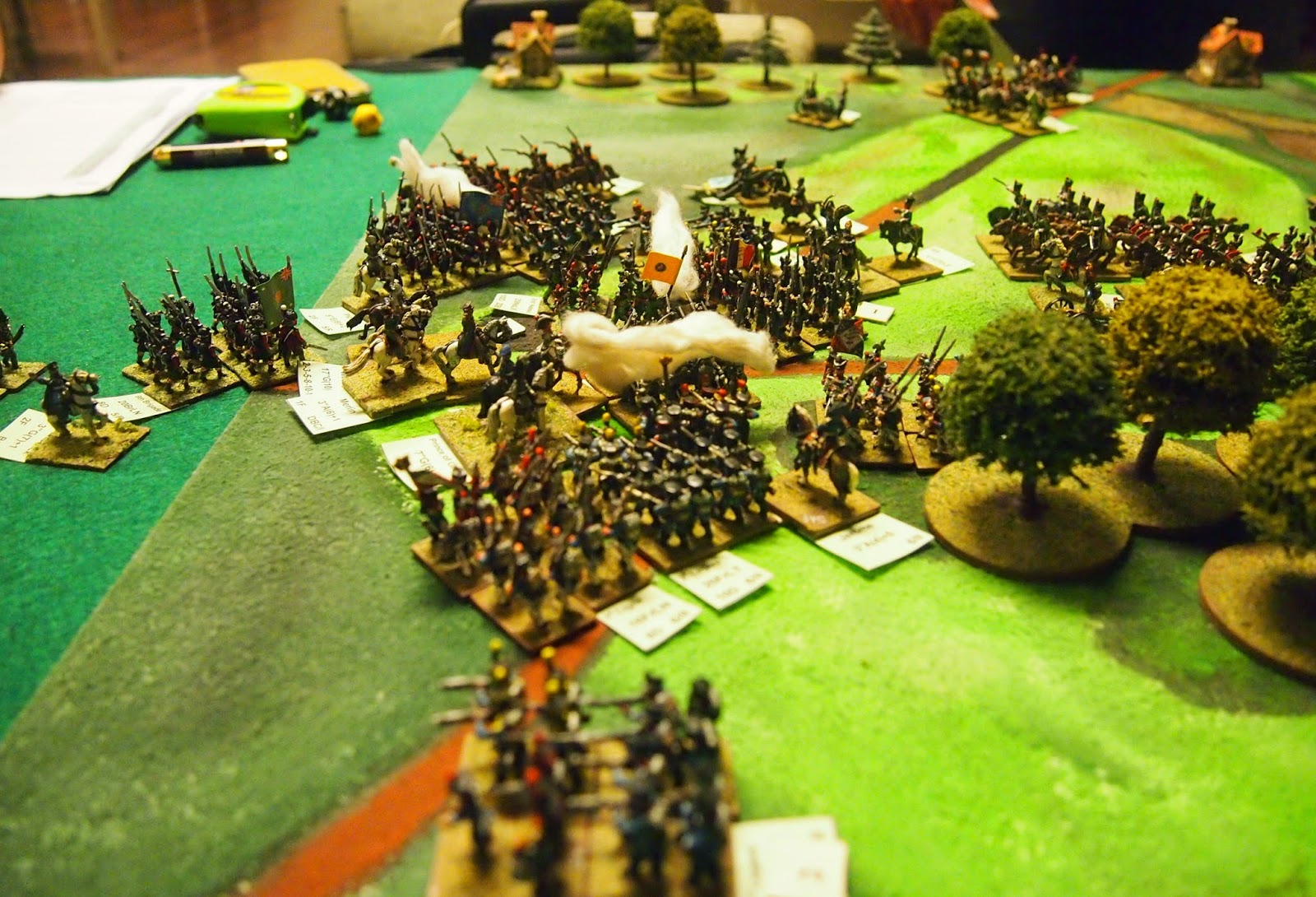 That left only the on-coming divisions of Picton and Brunswick to oppose the French onslaught, with precious little table to play on (note position of the green underlay cloth in the last two photos).

Not wishing to steal thunder, please see Mark's report for the details of what occurred.

We are scheduled to play out the second half of our Quatre Bras 200 game on Saturday, so I expect to post pt 2 a little while afterwards.
Posted by James Fisher at 16:15