At the recent NWS Games Day, I was fortunate to be invited to join in the re-fight of the Battle of Châlons. The actual battle, also known as the Battle of the Catalaunian Plains, was fought in 451 CE. It is generally considered as a bloody draw, or minor Roman-Allied victory to Aetius, the 'last true Roman', that blunted the Huns rampaging conquest of the western Roman empire and Attila's aura of invincibility.

As a practice (written with tongue firmly placed in cheek), I had played the version of the battle in Rome Total War: The Barbarian Invasions. In that version you only have the option of playing the Huns and, with the AI set at 'average', I'd managed an 'heroic victory'.  We'd not decided who was on which side, so on the morning of the game Andrew generously (?) asked me if I'd like to act as Attila. No pressure. 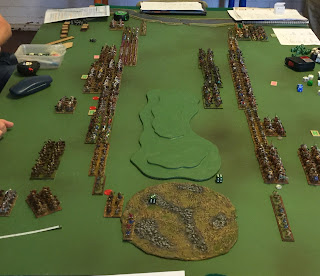 Table laid out. Roman-allied at left and Hunnic-allied at right. Figures 15 mm from collections of Andrew, David B (who unfortunately had another engagement) and Geoff.

There was a lot of symmetry in the two armies, but also important differences affording strength and vulnerabilities to each side.


In the computer game the Huns had four units of those 'nasty' horse archers. For the real thing they had ten of light cavalry, plus two Hunnic 'knights' (medium cavalry) who also had bows. The Romans also had horse archers amongst their Alan allies, though only six 'units'.

The biggest advantage to the Romans was, naturally, their heavy infantry 'legions'—comitatenses—three units with associated bowmen.

The Hunnic-allied had a slight superiority in heavy cavalry with the five units of the Ostrogoths, plus two with the Gepids against the Romans with one as Aetius' unit and three with the Visigoths (split 2:1 over separate commands). These were largely balanced by the Roman-allies medium cavalry.

Both sides had a smattering of archers as light infantry units and skirmishers. 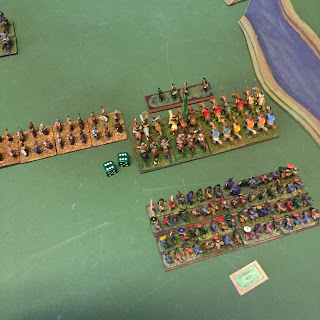 Good start for the Gepids. Jerry's double-six meant that Ardaric's quality had improved to 'good'. 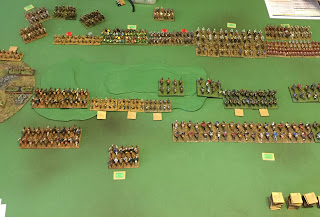 As Hunnic-allied, we had decided to be true to type, aggressive and take the high ground. Our forces at the bottom of the photo. 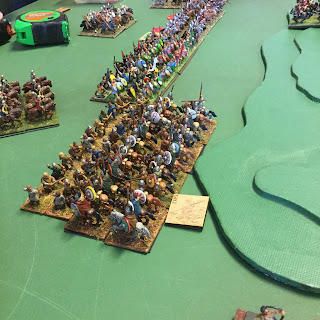 First 'in' were Oliver's Ostrogoths. 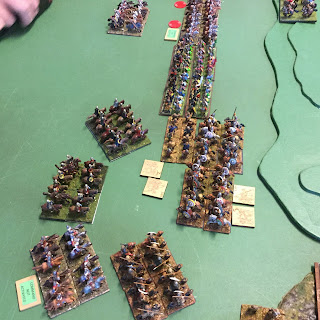 They easily pushed aside the Visigoth archers, but then faced their cavalry, a mix of heavy and medium. The markers are a mix of disorder and permanent losses (apart from the red and pink coloured ones that indicate whether a command has been activated or not). 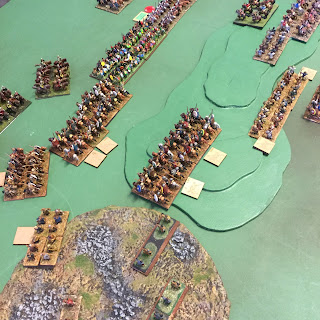 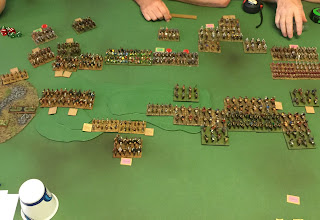 So far so good. The central hill in Hun & allied hands. 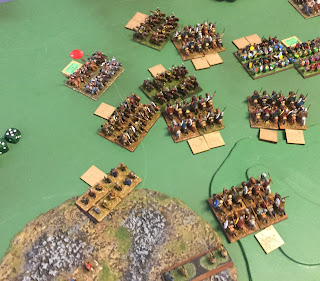 Whambo! The Visigoth counter-attack goes in. Ostrogoths bloodied, but unbeaten. 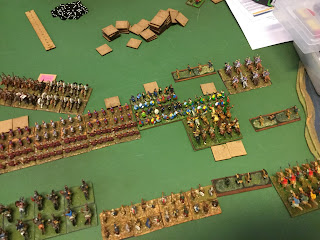 Over on the Hunnic left, the Gepid cavalry attacked the Roman Foederati. 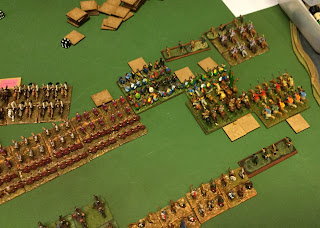 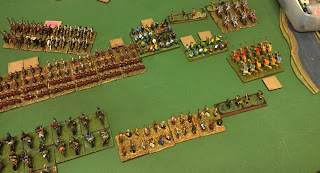 Devastation! Heavy cavalry beaten, Ardaric dead. Fortunately his command did not care, or was unaware, that they were now leaderless. 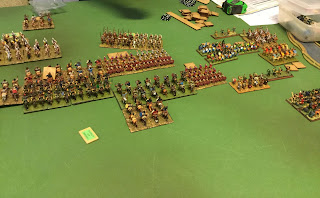 Time for Attila to send in the Huns. They got the better of Andrew's Alan horse archers, but do you think they could score a permanent hit on those Comitatenses? Geoff was rolling ones with impunity! 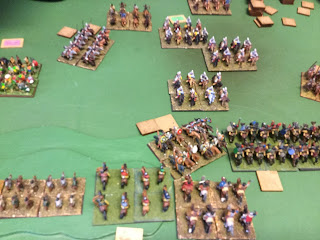 The cavalry battle continued in the centre around the hill. Biko had 'unit of the day' with the Visigoth medium cavalry shown in the centre of this photo, who successfully blunted successive attacks by three units of Huns, preventing any attacks on their fellow units or those of the Alans. 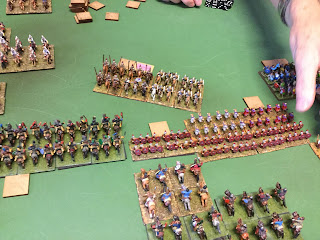 Finally, some hits on the Roman legions. One archer sub-unit from one unit. We'll take what we can get! 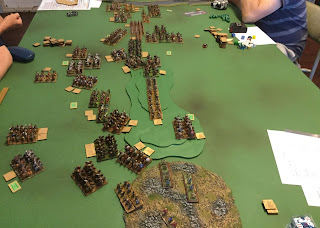 Looking down the line. The open table on the right is where the Hunnic-allied army began the battle. 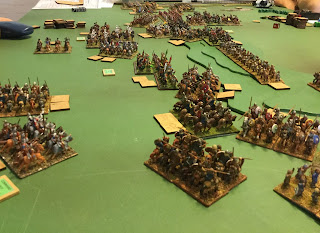 A nice photo of the same, lower down.

We began the fourth turn with the game very much in the balance, but it was to prove decisive. Firstly thanks to a series of successful attacks by the Huns, which were followed by several winning combats to the Gepids (particularly) and the Ostrogoths. 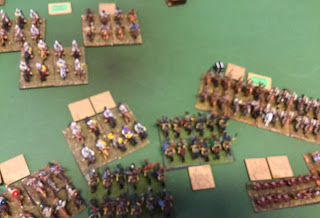 The main thing to notice in this poorly focussed photo is the six on the die. That was Geoff's roll for his cohesion test for Aetius' heavy cavalry unit. It was eliminated and the Roman leader dead. As with the loss of Ardaric, his command was not affected, but the loss of a charismatic leader meant that every unit in the army need to take a discipline test, which many failed.

The thing about Impetus is that the combination of rolling a fairly large number of dice (without being excessive so as to seem like a game of dice) and, more importantly, that the desirability of ones or sixes changes with circumstances means that one is rarely 'lucky' or 'unlucky' for an entire game! 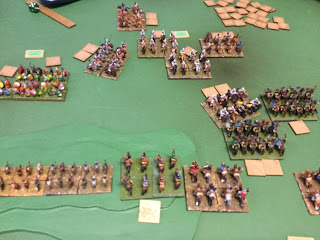 The Alans had been thinned out dramatically and had reached their breakpoint, as had the Visigoths. They tried in turn to break the Ostrogoths and then to defeat Attila's unit of Hunnic 'knights', but were unsuccessful on both counts. 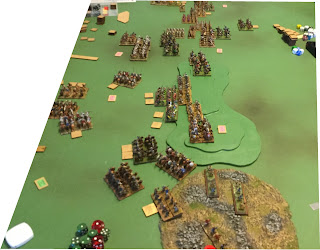 The loss of those allied commands meant that the Roman-allied army was broken, so it was a Hunnic-allied victory.

It was a fabulous game, that was enjoyed by all and played in the spirit of good wargamesmanship that one wants and expects. Thanks very much to Andrew for organising it and to the NWS for the Games Day.

There was, of course, for me/us the added bonus of being on the winning side. This is to be relished when it happens, 'cause we all know, as the Great Man said, that glory is but fleeting*.


* ...but obscurity is forever Napoleon
Posted by James Fisher at 07:09