In an earlier post I introduced the wonderful terrain that Mark put together for this refight of the Battle of Reichenberg. 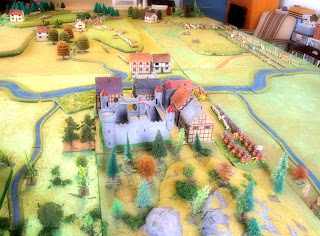 The 'soft lens' effect was a mistake due to me mucking around with my camera, but it looks a treat, I reckon. Gotta love serendipity!

If you are not familiar with this small action of the Seven Year's War, then I recommend the description on the excellent Kronoskaf website.

To set the scene, the Austrian commander, FZM Christian Moritz, had split his army between the heights around Reichenberg, south-west across the River Neisse to one side of the hills that creates the valley around Rosenthal and still further south-west in the hills (mountains) around Franzensdorf. He had spread his army of a mere 13 200 foot and 3 500 horse over a frontage of some 4 km, albeit behind fieldworks. 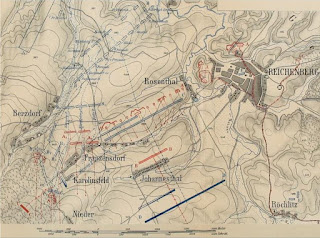 Seeing his opportunity, Prussian general von Bevern ordered an immediate attack, his 3 100 horse against the larger Austrian force and 11 450 foot, supported by 12 heavy guns, against the centre of the Austrian divided defence. 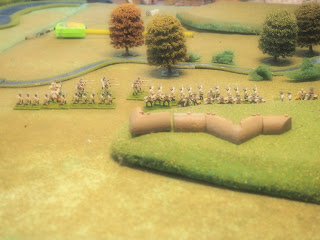 Never one to be predictable, Julian, commander of the Austrian right wing, performed one of his 'Julian manoeuvres'. To be fair, he did so to avoid casualties from the Prussian artillery, but in doing so abandoned his earthworks and set himself a race against the clock to get back into position. 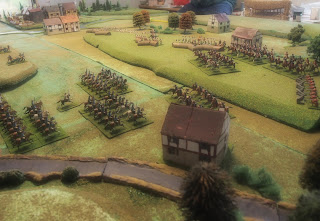 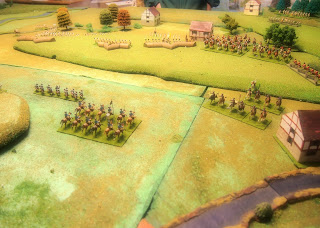 In the historical action, the Prussian cavalry swept the Austrian horsemen from the field, causing Moritz to lose confidence and order a retreat. This was not to be in our case. 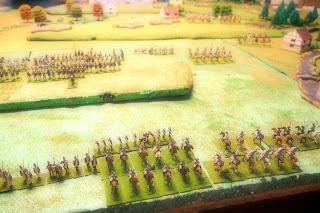 The Prussians lead hussars and dragoons lost the opening mêlées to Mark's Austrian dragoons. Most of the supporting units panicked and retreated with their countrymen! 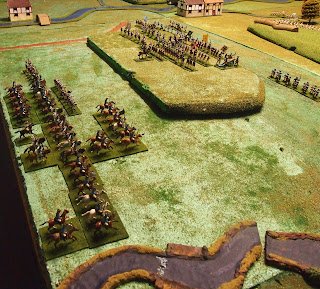 Fortunately, for me, the Prussian cavalry rallied. The infantry advanced over the hill to prepare to attack the Austrian positions across the valley. 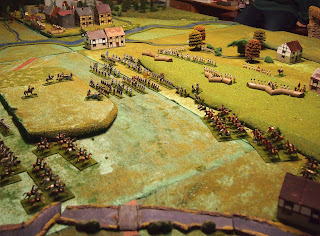 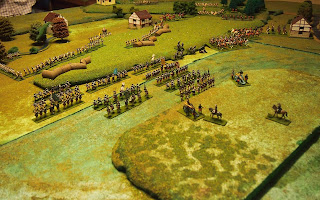 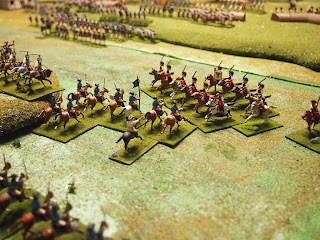 With strength reduced from the earlier mêlée, the Prussian dragoons took on the Austrian cuirassiers. 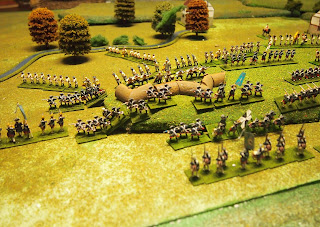 Julian got lucky—or perhaps timed it perfectly?—reoccupying the earthworks just in time. 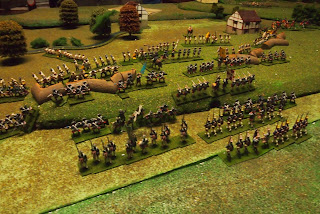 Success in the centre, less so against the earthworks. A Prussian army test at 1/3 losses was duly passed. 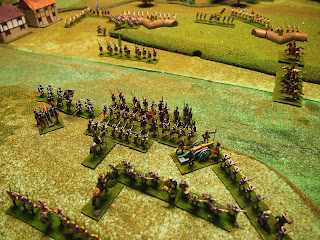 Then, a critical moment. Mark's weakened unit in the earthworks (top right of photo) won a close-fought mêlée (which required a complete calculation of the die-roll x figure score for each side, something that we don't often have to do).
My 'brave' Prussians retreated in disorder, joined by several of their lily-livered mates! 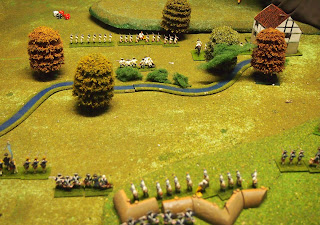 The Prussians had gained the upper-hand against the Austrian right, apart from the earthwork, but it was not enough. 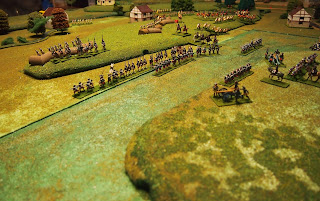 Pressure was mounting on the Prussian right as the cavalry had failed again. 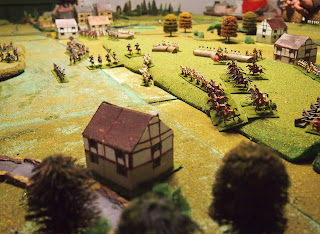 With losses at 1/2 for the Prussians and 1/4 for the Austrians, both armies took an army morale test. Fittingly, given the battlefield situation, the Prussians failed and so would retreat.

An Austrian win, against the history.


It was a most enjoyable, close-run game; the Prussians seemed to have it 'in the bag' until the Austrian critical defence of the central earthworks tipped the scale.

Thanks to Mark for organising and setting up the game and to Julian for hosting at ANF HQ.

(As an aside, this was the last game on the battle-worn terrain sheets. The next land battle at Julian's will feature the renovated version.