More about the strange title later.

I have been inspired to put up this post after reading other bloggers' posts about plans for the year, as well as a long discussion with Julian about our own plans. So, here goes with a navel-gazing post that I hope is of interest to others.

On the drawing board, chez moi

In brief, the plans for our little group consist of individual projects that are in the mutual interest and will increase the diversity and perhaps frequency of games that we'll play over the coming year (and years).

• Julian has several wargaming 'itches' to scratch. He is focussed on 'sorting out' American Civil War, World War I and World War II in terms of capacity to stage games and preferred rules for each period. He'll be hosting the first of these next week, so expect a report soon.

Added to these he'll be continuing with Napoleonic naval (now that he has 'found' Grand Fleet Actions for us) and War of Spanish Succession.

• I have not asked specifically what he has planned, but expect that Mark will 'do what Mark does'; that is quietly churn out a steady procession of beautifully painted units until he says, let's have a game of 'x'. I expect that he'll continue to add units to late-mediaeval, ancient (Greco-Roman and perhaps earlier 'classical' eras) and Seven Year's War/War of Austrian Succession armies, with some Napoleonics thrown in. He has mentioned about a game of Mons Graupius, so I expect that will happen soon.

The first is to bring some of my many part-painted and unpainted figures to completion, focussing on Napoleonics. I began late last year with some French cavalry, 18 regiments of chasseurs à cheval, to be precise. I like to paint a lot of units at once. I doubt whether this increases my rate of output, but it helps with my self-perception (self-deception?).

The second 'itch' is an opportunity that comes from the first. I want to try a wargaming idea that I have had for some time—I think that I dreamt it up myself, but one can never be sure. It is to stage the same game at two or more scales. At its grandest this would involve representation from the strategic situation, to the overall battle, to sections of the battle, to detailed action within a section of the battle. I have dubbed it the 'telescoping scales concept' (TSC), hence the catchy title for this post. This is partly tongue-in-cheek and partly as an homage to the 'telescoping time concept' (TTC) of Empire.

In essence it is nothing more that what wargamers do with campaigns, but with a few extra levels added in. The 'gold star' version would involve several tables, or sections of a table, with figures of different scales depicting aspects of the same battle (perhaps even campaign). Play and players would move between the tables according to the desire to 'zoom in' on the action. This could be codified, but I prefer it to be at the whim and interest of the player(s). The results of actions conducted at the lower scales would be reflected back to the larger scales of the battle.

It definitely can be done, the question is whether it will work well enough to provide an interesting game and add to appreciation of the historical action. Once I have a few more units painted to completion, I plan to have a go at it solo.

I'll probably only use two scales to begin with, the overall battle and a specific section or two, all with 1/72nd scale figures. Having a go solo, I'll I be able to try a few different combinations of rules for the various scales. If it works for me, then I'll see if anyone else is keen to join in. It will be fun trying, of that I have no doubt! :)

Anyway, that's a fair bit for a year I reckon. The combination of our efforts should keep us well and truly 'off the streets'.

As with all plans it will be interesting to see how we go, what gets done, what is added or changed and what remains an 'itch' come late 2019.

Not sure whether this is like David Essex in Jeff Wayne's War of the Worlds, but "I have made a start already"!

I began painting in earnest with the chasseurs à cheval, plus a few dragoons, late last year. 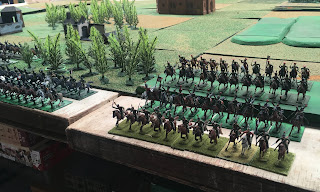 I made some pretty good progress, by my standards, before I went away, but 'lost' much of December and most of January.


I use a black undercoat (Paynes' Grey to be precise) and like to stick figures on bases and riders on horses as soon as possible, so the figures are dark and on equally dark looking horses during the early stages of painting. 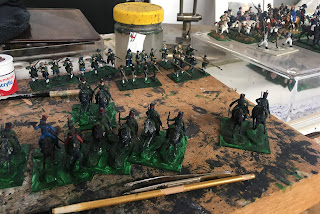 I'll throw in the odd unit from other periods, to keep them trickling along. Jones' regiment of foote at rear, nearing completion. 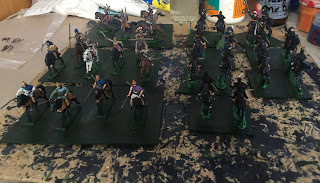 Hat Thracians, Dark Alliance Amazons and a mix of Revell and Mars figures as Hesilrige's Lobsters. Base coat completed (not on all of the horses). 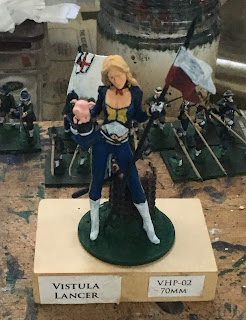 Another little 'extra' thrown in, my new girl friend, Maria, of the Vistula Lancers. Base coat completed at time of the photo. Figure by Bartek Drejewicz purchased from Valhalla online shop, Poland.