From Murray Bridge it was on to Mt Gambier for a 'rest and recharge' day (including producing the previous post) ahead of Round 2 of the sprinters.

My great mate (second bro') and fellow speedway fan, Angus arrived so we took in some of Mt Gambier's sights 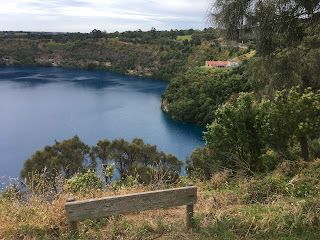 Blue Lake, which was formed by super-heated steam blasting a hole in the crust and is the town's water supply. 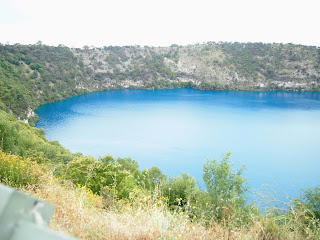 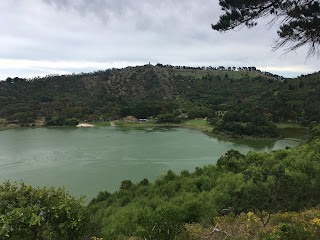 The track at Mt Gambier is a picturesque, rural venue. More exciting racing, but the fellas were going a bit hard, the resulting stoppages meant that the meeting went well into the night, finishing just after midnight.

Next night we were in Warrnambool, a well-organised venue, with great viewing from the terrace. 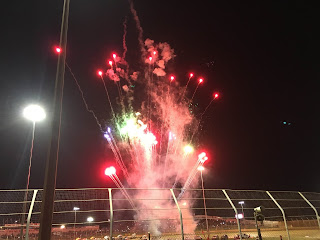 Fireworks together with the chequered flag of the A Main. 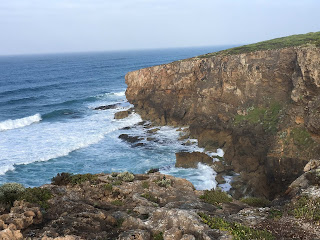 Angus found us a beaut spot near the coast to camp for the night. 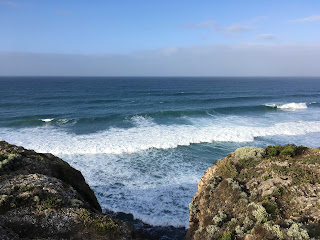 Next it was off to Avalon raceway, near Melbourne. We arrived early enough for the open pit time, seeing the cars in final preparation... 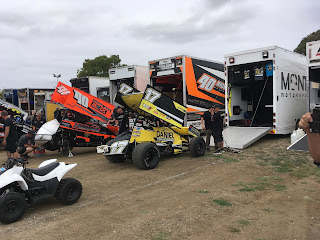 James McFadden, who is looking for a hat-trick of titles. 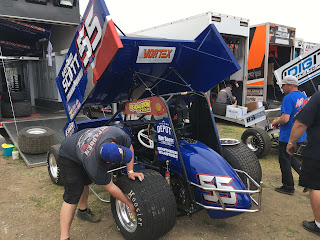 Freshly arrived from Oklahoma, delayed by snow, was NSW-born and now professional sprintcar driver based in Minnesota, Brooke Tatnell, who has won the title eight times since 1994. 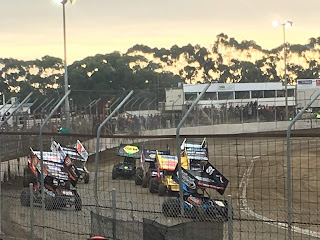 The four previous meetings were great, but the A Main at Avalon was the most exciting of the lot, the cars in first five positions vying over 35 laps with only one stoppage. 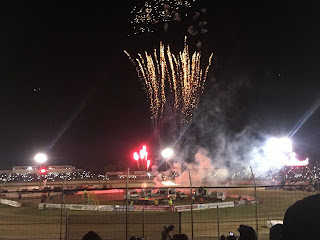 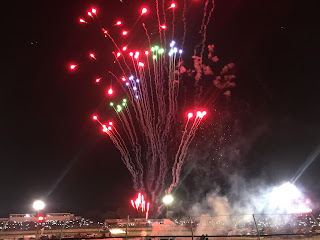 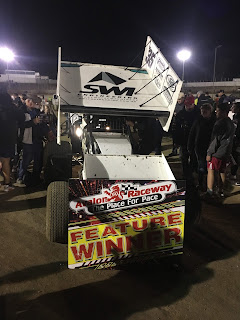 So ended the speedway phase of the trip.

After a few days with family in Melbourne, it was off to Drouin for Austerlitz II. 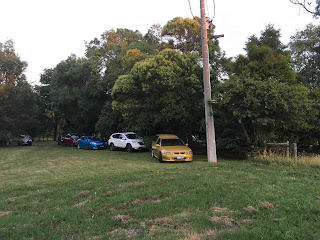 Magnificent to be back in the country, which is still green in mid-summer; a great contrast from home. 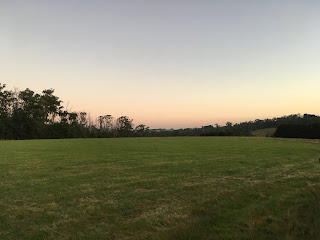 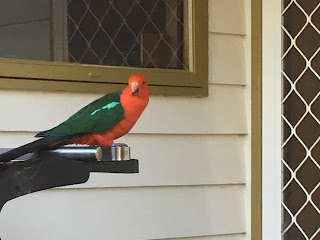 The friendly King Parrots, encouraged by Tim over the years, came to join us on the deck. 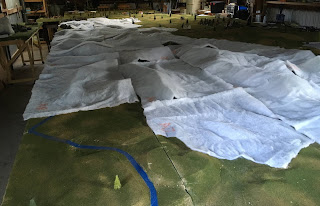 In the shed, the fog covered the low-lying areas of the battlefield. 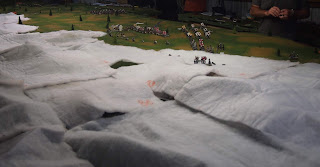 For this version of the battle, both sides had historical set-up, but free reign concerning initial orders. 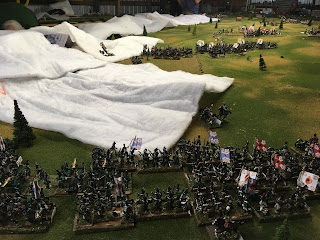 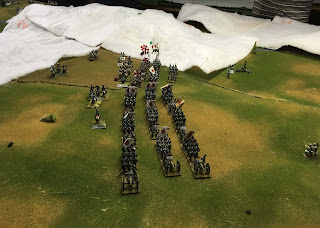 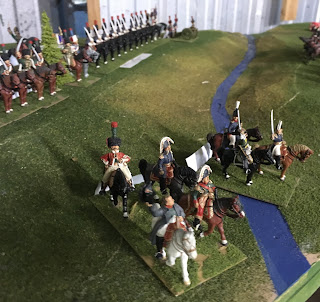 The fog lifted, the Emperor waved his hat, sending his marshals to their commands. 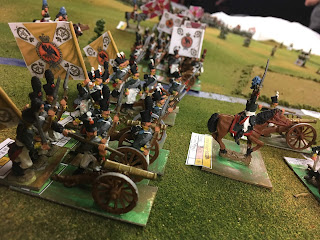 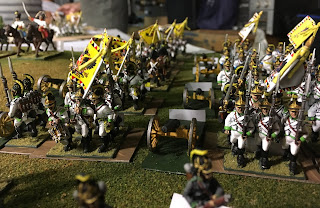 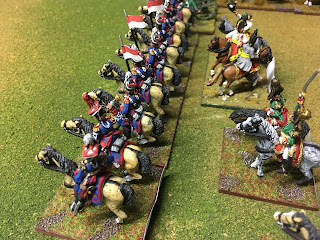 ... advanced to a defensive line in the centre, attacking in the north and south. 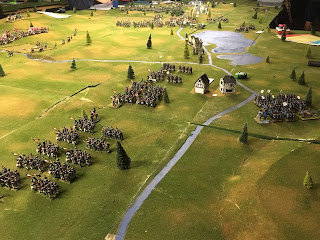 The fog lifted, producing some surprises. 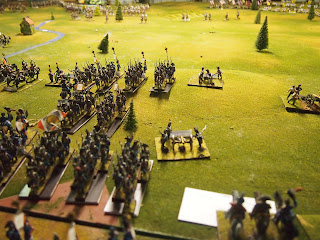 In the centre, Bernadotte's I Corps (my command) supported Soult's IV Corps, with Murat's heavy cavalry in support of both. 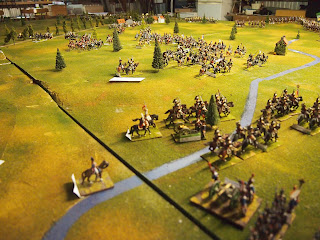 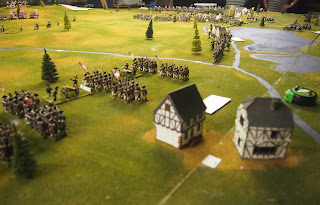 Looking south, the masses of Buxhowden's wing were opposed only by a division of Soult; until Davout arrived. 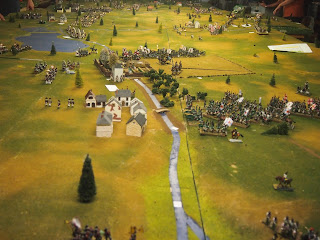 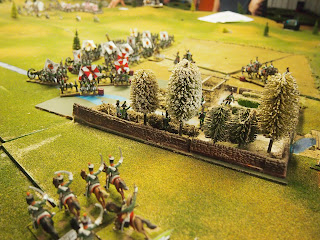 Langeron was busily engaged with peasants, I mean pheasants, in the pheasantry.


That's where we left the game last night. Today it is hotting up, on and off the table.

Off the table a cyclone off the Queensland coast is sending down hot air, bringing the forecast max. to 40ºC before a cold front coming from the west that will deliver showers and a drop to a mere 20ºC tomorrow (I'll be searching for 'me' thermals)! On the table Lannes is strongly engaged in the north, Davout in the south and Soult, Murat and Bernadotte are driving for the centre.

More on that in the next instalment.
Posted by James Fisher at 11:27