What we are told about this battle by Didorus Siculus is that the Carthaginians decided to fight in a relatively narrow pass, forcing them into double line. If true, given their numerical superiority, this would have been a decidedly unusual strategy, to say the least. They would surely not have been unaware of the legendary achievements of Leonidas' Spartans at Thermopylae, for one thing, and secondly, the terrain in the general vicinity would not necessarily demand such a sacrifice of their advantage.

We gave them every chance, the armies were not so vastly different in size. The Greeks: - 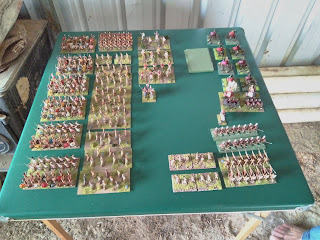 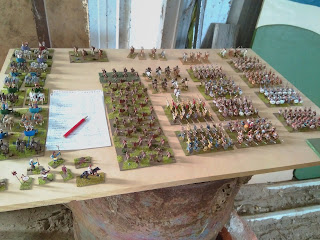 And how both sides looked on the table, Greeks on the right. The Carthaginian strategy of strength on their own right is obvious. As Hanno I wondered if I ought not to be even more bold and place yet more troops on my right, but then the risk would be that the forces under Archagathus would outflank my dear friend and comrade-in-arms, Bomilcar. 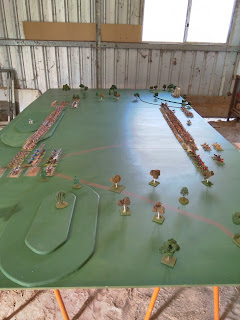 As the armies advanced, the narrowness of the available frontage was already beginning to play on my mind. Initially, the chariot skirmishes were relatively indecisive on the Carthaginian right, and even that was something of a disappointment. 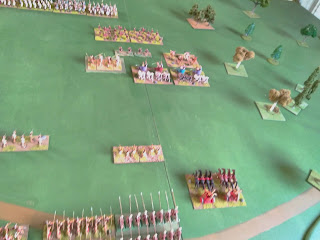 I retained high hopes, however, for my Numidian cavalry, where I had a superiority. If I could just get around the back of the hoplite phalanx, there might be a good chance of victory. 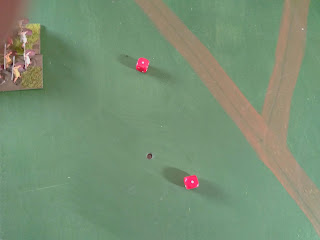 Rolling for initiative for Bomilcar brought only heartbreak, however, as his double one send him down to the very bottom of the league of generalship - only Agothocles' repeat of the same roll provided any comfort, although he was still adequately competent, which could certainly not be said of my comrade-in-arms, who was facing adverse odds: just look at that Cyrenian infantry moving up to support their chariots in the picture below. 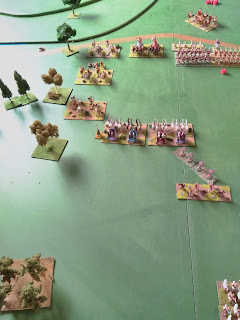 As is the way with battles, especially ancients battles, the auxiliary forces' engagement seemed to go this way and that, with casualties on both sides, and nothing much decisive. I was beginning to wonder, as Hanno, whether nightfall might come (at the end of Move 10) before the Greek phalanx actually got into action. Indeed, delaying tactics were pretty much the sum total of my objectives. But the truth was, as the shot below of the Carthaginian right at the end of even Move 5 shows, that the winnowing out was moving inexorably in favour of the Greeks. There seemed little chance now that my depleted force of Numidian horsemen would actually make it to the rear of the Greek line. 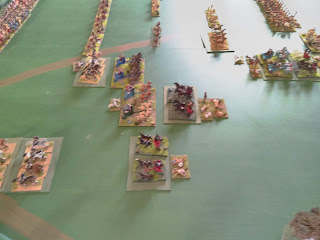 There was worse news from the other flank, where on Move 7 the combined arms assault of Archagathus tore into my dear colleague Bomilar's depleted flank. The result was never really in doubt. 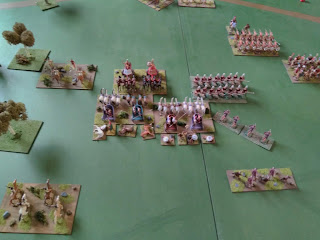 Agothocles spent one more move hesitating, but as the sun began to go down he recognised that victory lay in his grasp if was prepared to be bold, and my last hope was extinguished. A double move disordered much of his phalanx on the charge, but put him now perilously close to my line. How impressive it looks, as if it could envelop the hoplites at both ends. But the relative weakness of the troops is sufficient, in Impetus, to make the difference - as it should. 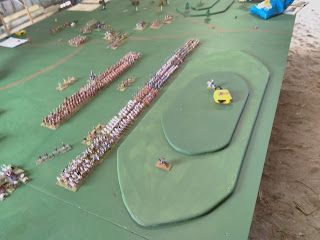 Left with little option, I charged myself, with further disorder, to my own men this time. The final clash of arms was upon us. Only Baal could save us now, I thought to myself. For Bomilcar certainly would not. 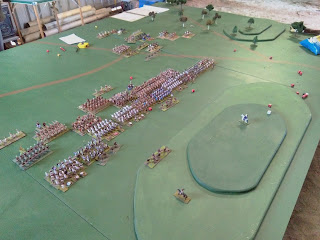 The Sacred Band were unimpressive, although some units fought bravely alongside them. The Carthaginian line began to crack, the photo below showing the North African evening sunlight picking out our units streaming from the field. 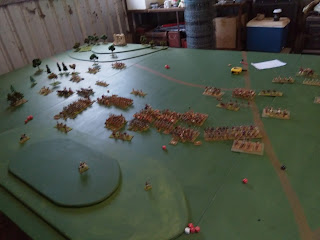 The following move, 10, it was all over: the Carthaginian army routed, and the strategically placed remaining chariots on the Greek right were in an ideal position to turn a rout into a massacre. Had Agothocles been able to fly, he would have seen his foe in flight across the entire field. 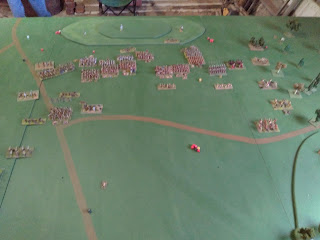 A magnificent Greek victory, exactly as historically. A wonderful day's wargaming - many thanks to Mark as usual for painting so many beautiful troops. Impetus 1 served the purpose perfectly well, and certainly seems to me a considerable improvement over WRG 7, which is what I used when I last played ancients a generation ago.

A lingering doubt remained for us over this question of the narrow frontage. Eventually, the Carthaginians were able to tell the story from their own standpoint. Blaming the terrain and the commanders was surely easier than blaming the inferiority of their own soldiers. Wargaming sometimes leads to a different perspective on the history. Though as Hanno I did no better than historically. White Tunis, a good place for Carthaginians to die.