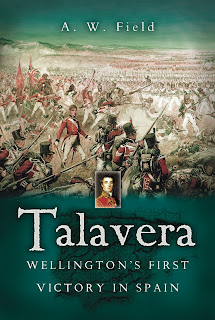 This book is a rare treat; an objective view of the British in the Peninsular War written by an English author; and a serving military man to boot. Andrew Field’s account of the campaign and battle of Talavera is detailed, analytical and readable. It will make a fine addition to the collection of anyone interested in the Napoleonic wars, especially, but not exclusively, wargamers.
Talavera was typical of so many Peninsular battles; a closely-fought affair that was a pyrrhic victory for the Anglo-allied forces, leading as it did to a withdrawal and continuation of the long and costly war. Andrew Field’s book has a structure that will be familiar to many readers, comprising chapters of background, the armies, the commanders, detailed chapters dealing with the battle itself and the aftermath. In addition to these is a chapter on tactics, orders of battle and a tour of the battlefield.


The introduction and first chapter provide the background to the Talavera campaign. This will be of some use and interest to the general reader or ‘student’ of the period who knows little about the Peninsular and this campaign, but is too cursory to be of much use to others. This is disappointing as it results in the usual description found in any overview, presenting nothing either new or insightful. The content could have been covered in a paragraph or two about the campaign introducing the first chapter.
The book improves dramatically with the chapter two, ‘The Armies’. In this chapter the general, overview material that typified the introduction and first chapter gives way to some detail and interesting quotes including material that I, at least, have not seen before. For example, we were only discussing at the ANF the other day about whether to include rules for the ‘typically’ uncontrollable British cavalry in our preferred ruleset, debating how much of this is fact compared with wargamers’ myth perpetuated by successive rule-writers. From what Andrew Field presents, it appears that a combination of the two is probably correct. Another interesting detail that he presents are the figures on the numbers of horses required per gun and per battery. This is not something that I have considered before and it highlights the logistical and practical problems of campaigning in the period, especially in the Peninsula. This balanced, critical approach is continued in the subsequent chapter on ‘The Commanders’.
The book is worth reading for chapter four, ‘Tactics’, alone. Field seeks to refute the mis-information that was first generated by authors like Oman and has been perpetuated since then, especially amongst the early writers of rules for Napoleonic wargaming “...without being contested by further research until relatively recently” (page 49). As this quote states, his re-analysis is not new (featuring as it does in publications such as Elting’s “Swords Around a Throne” and in many issues of that fabulous magazine “Empires, Eagles and Lions”), but Mr Field presents it in a logical, concise and clearly articulated fashion.
The account of the battle itself is divided into three chapters. The first examines the night attack of 27th July. This is an oft-overlooked part of the battle which, Field suggests, is due to the poor performance of one of Wellington’s most trusted subordinates, General Hill. The next chapter covers the first, abortive French attack on the morning of 28th July, while the main attack of the afternoon and the aftermath are the subject of the third of these chapters. Throughout his description and analysis of the battle, Field refers to his chapter on tactics, providing an excellent reference point for the reader and one of the main bases for his critical assessments of the action (or in-action) of commanders and of the performance of troops at particular stages.
Chapter 11 is a tour of battlefield and description of key sites using both modern and contemporary maps and helpful photographs (e.g below). This is a fantastic resource for anyone who, like us, ‘popping’ over to Spain to look for ourselves is not such an easy option. This chapter and the appendices of army lists, along with the descriptions of the battle are invaluable for anyone putting together a scenario of Talavera for a wargame—as we will be in the near future.


An example of the helpful photographs that accompany the 'tour of the battlefield. In this case "part of the wall in the east of the town that was manned by Spanish troops to help anchor the allied right." 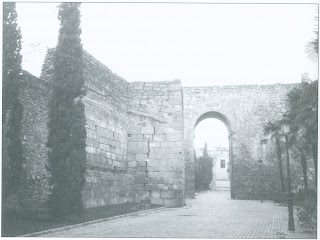 Andrew Field’s summary of the battle, its aftermath and the performance of the armies and commanders is one of the most honest and impartial accounts that I have read. I was particularly interested to read such an objective assessment, from an English author, of the contribution of the Spanish.
Talavera was a classic case of a ‘minor victory’ or a ‘winning draw’ in wargames parlance. Both sides suffered high casualties and neither wished to continue the battle. The ‘loser’ (French) withdrew but the ‘winner’ (British & Spanish) were not in a position to pursue nor pressure them. Field goes as far as to propose that it was a pyrrhic victory. He admits that the campaign was a French “success” as the supply situation, Soult’s outflanking manoeuvre and Venegas’ failure before Madrid meant that Wellesley’s attempt to capture Madrid only resulted in a withdrawal to Portugal. Thus it was similar to all of Wellesley/Wellington’s victories prior to the decisive battles of Salamanca and Vitoria—a sound defence that checked a French attack, but ultimately resulted in the retreat of the Anglo-Allied army(ies) because they were unable to exploit the success. Conversely, due to divided command, poorly co-ordinated attacks and solid defence, the French failed to take advantage of one of their best opportunities to inflict a serious defeat on an Anglo-allied army in the Peninsula. 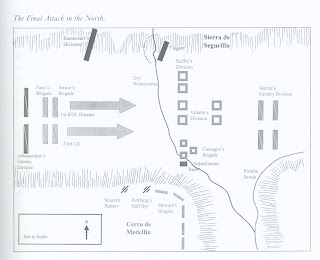 The maps in the book, such as the one above of the final French attack, are excellent. In this particular map the 9ème légère are labelled as the 7ème légère .
The book is replete with clear maps that, most pleasing to me, include most of the towns and features that are mentioned in the text! There are few typographical errors evident. One exception is where the 9ème légère becomes the 8ème ligne in a schematic of the main French attack on the afternoon of 28th July. This is repeated with the same unit, 9ème légère, which is listed as 7ème légère in both the text and on the map on pages 116 & 117. Fortunately these errors are easily clarified by the army lists, but it is disappointing that they have slipped through editing.
Overall this is an excellent book with loads of detail, a clear description of strategy, tactics, troop distributions, movements and key actions during the battle, complemented by numerous quotes from eye-wtinesses, analysis of the tactics, detail of points of dispute from various sources and interesting and sometimes harrowing observations; such as the exchange of casualties following the first abortive French attack on the 28th (p 97) and the horrendous fire at end of the battle (p 122).
Highly recommended.
Posted by James Fisher at 19:30