A rich source of information for wargamers, enthusiasts and budding historians


(Image courtesy of the publishers. Please do not reproduce without first seeking permission) 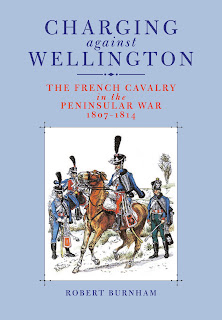 One of my favourite books of the Napoleonic period is David Johnson’s “Napoleon's Cavalry and its Leaders”. That book provides an overview of the French cavalry of the Napoleonic wars and some of its principal leaders. In a similar manner Robert Burnham’s book deals with the subject of Napoleon’s cavalry and its leaders in the Iberian Peninsula, but, unlike the selected approach of Johnson’s book, Burnham’s tome is effectively a dictionary on the subject and so is a rich source of information for wargamers, enthusiasts and budding historians. Despite the title of the book, which is somewhat misleading and was no doubt determined by publishing requirements, the book covers French cavalry in action against the British, Spanish and Portuguese.


Robert Burnham, who edits the Napoleon Series website, has drawn on his own resources and those of his extensive network of devotees of the Napoleonic period to produce this definitive account of the French cavalry during the Peninsular War. The book begins with the briefest potted history of the Peninsular War. As he points out, this is not intended to act as any sort of a history of the conflict, but rather to introduce the four distinct phases of the war from the point of view of the organisation of the French-Allied army and its cavalry.
The remainder of the book is divided into three parts; ‘Organisation of the French Cavalry in the Peninsula’, ‘ The Peninsular Cavalry Generals’ and ‘The Regiments’. The first four chapters that comprise Part One are an expansion of the introduction, but with much greater detail regarding the organisation of the French army, principally focussed on the cavalry. Each chapter contains detailed tables (from 9 to 28 tables in each chapter!) which detail the formations, units and strengths of the French cavalry in each formation that was present in the Peninsular War from 1807–1814.
Part Two, ‘The Peninsular Cavalry Generals’ begins with an overview chapter that provides a description of the French cavalry generals who served in the Peninsula, those who lost their lives and a list of the five best cavalry generals of division and brigade that served in the Peninsula, and the five worst. Such lists will always cause discussion and argument. There are some amongst the best that I completely agree with (Montbrun, Milhaud, Latour-Maubourg), some that I did not previously know enough about to pass judgement (Sparre, Saint-Alphonse) and some whose rating is surprising to me (particularly Kellermann the younger and Gardanne), although Burnham’s reasoning for judging them as such is detailed in the short paragraph about each (and later in Part Two). The one glaring omission, from my point of view, is Lasalle. Surely his record, in campaigns in Germany, Poland, Spain and Austria speaks for itself? I suspect that Mr Burnham has downgraded him due to his flamboyance and careless approach to casualties.
Chapters 6–9 of Part Two provide a biography of every French cavalry general who served in the Peninsula, from Arrighi to Watier. For each of them Burnham gives a table listing awards and honours, date and place of birth, regiments commanded, date attained rank of general, time in the Peninsula, command or post in the Peninsula, date, place and cause of death and place of burial. This is followed by a brief yet detailed biography for each general.
The last part of the book is a detailed description of every cavalry regiment that served in the Peninsula, whether cuirassier or chasseur, provisional or listed, French or allied. For each Mr Burnham provides a chronology of the colonels, locations of the squadrons, battles and officer casualties and date of departure from the Peninsula. This is information, which is simply not readily available and certainly not in a single volume, would be sufficient in itself, but is made all the more by Parts which proceed it.
Readers are unlikely to read this book from cover to cover, but rather browse through it or go to specific parts when searching out information for a particular point of interest or to design a wargame. As the author himself told me it “is designed to be more of a reference book than anything else. It is crammed with useful information for the wargamer, but doesn't lend itself to sitting down and reading it all at once. A few things I discovered, much to my surprise, was how many other sources got the information wrong, especially about the number of squadrons in each regiment, which brigade they were assigned to, etc. Oman was very loose at times.”
This book is a must for any buff of the Napoleonic wars whether to clarify orders of battle for a wargame, to check regimental histories, seek information as the basis to rate French cavalry generals, for general interest or to win an argument!
Posted by James Fisher at 02:13