A fine dish, but watch for the bones

Review of Napoleon's Chicken Marengo: Creating the Myth of the Emperor's Favourite Dish by Andrew Uffindell


(Images courtesy of the publishers. Please do not reproduce without first seeking permission) 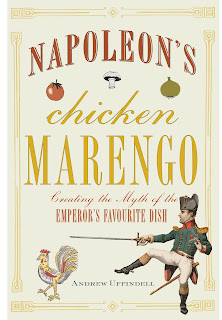 I like food and eating. I am even the cook of the house, but am not a “foodie”, so the title of this book did not immediately appeal to me. I began reading it because the Marengo campaign is one that holds particular interest to me and it is a battle that I am hoping we will play as a wargame in the future. Having begun my reading of the book feeling “luke warm” about it, I was more than pleasantly surprised and found it to be, in the main, an engaging read.
“Napoleon's Chicken Marengo” is a balanced critique of the events prior to, during and after the battle, with particular emphasis on its place in history. Over the course of the book, Andrew Uffindell slowly reveals the multitude of myths, stories and mis-conceptions that have arisen from the battle. These have their origins in Napoleon’s own re-writing of the battle—which Uffindell contests was done by Napoleon as he used his idealised version of Marengo in the development of his art of war—through to his contemporary and subsequent enemies attempting to discredit him for political or personal reasons. Throughout the book Uffindel uses the Chicken Marengo dish as the back-drop to the history of the battle and it’s place in the psyche of Napoleonic France and beyond.
The book reads like a series of essays that are connected (at times only loosely) around the theme of Marengo: the battle and the dish. The many stories and anecdotes that Andrew Uffindel relates in each chapter provide much “colour”, although at times the writing is verbose and he seemed to be making much of little, so I was left to wonder at the relevance. This, combined with a chapter structure that is not always logical, made the book long-winded and repetitive in parts.
Despite these criticisms, most of the stories, while seemingly asides at first, reward the reader with an item of interest or a humorous or quirky observation. For example, the story of Colonel Jean-François Jacqueminot and a group of friends, former aides of Napoleon, poking fun at newly-returned royalists after Napoleon’s first abdication in 1814, by pretending to be émigres and protesting a menu that included poulét à la Marengo  (pp 116–120), or the British orator who, overhearing someone say that beer had defeated Napoleon, said “beer and wine met at Waterloo... wine red with fury, boiling over with enthusiasm,... rose thrice against that hill on which stood a wall of immovable men, the sons of beer. You have read history: beer gained the day” (p 127). I had a particular chuckle at the description of the aversion of English tourists to French food with sauces compared with their stodgy, “natural” dishes (pp 128–131).
My biggest criticism of the book is not what it includes, but what is missing. Where is the description of the battle? Uffindel seems to assume that the reader knows the battle well. I am a ‘student’ of Napoleonic history, but would have liked a refresher’ description of the battle of Marengo that pointed out the areas of greatest contention. This is especially needed as a great detail of the battle is clouded with uncertainty and the perpetuation of myths and half-truths. One example of this is the supposed destruction of the Consular Guard, which has been repeated as recently as in the Osprey Campaign series publication “Marengo 1800—Napoleon's day of fate” (Hollins and Hook 2000). In his questioning of various participant’s versions of the battle, Uffindel seems to miss the key point that an individual’s recollection of battle is influenced by his position on battlefield as well as smoke, noise and generally limited visibility. Even in the rarefied environment of a wargame it can be difficult to recall all of the details of an action and opinions vary as to what occurred! 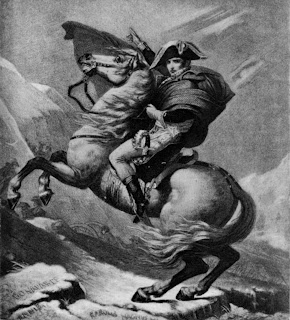 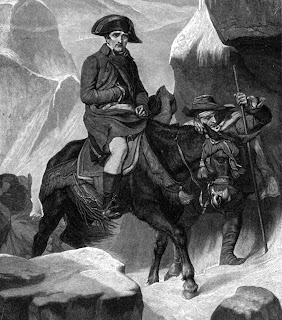 Two of the most famous paintings of the Napoleonic era and just one of the myths that Uffindel debunks.
The selection of paintings and photos in the centre plates of the book, which are all in black and white, provide excellent support to the text and all are clearly reproduced. In addition to these are clear, detailed black and white reproductions of famous paintings of individuals and units that are found at the end of most chapters. They are a welcome inclusion, reminiscent of the history texts of the late nineteenth and early 20th centuries, which add greatly to the overall appeal of the book and the reading experience.
Posted by James Fisher at 00:12