A good read, but with a notable omission 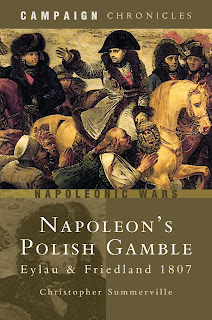 This book arrived at a perfect time. We were in the final stags of planning our game of the Battle of Eylau and had some gaps in the orders of battle, so I turned directly and excitedly to that section of the book. What a disappointment. Rather than a long and detailed list, I was greeted by the following statement “It is a feature of the ‘Campaign Chronicles’ series to give detailed orders of battle, where known. Such lists, illustrating the command structure of armies and unit strengths, are useful aids when attempting to understand or recreate a military action. But in the present volume, I feel unable to provide such a helpful piece of apparatus.“ Christopher Summerville goes on to explain that, because it is difficult to settle on definitive orders of battle, he did not feel able to provide any. This seems a strange decision as all orders of battle from the Napoleonic Wars are subject to question. Surely they could have been provided with notes regarding sources and discrepancies?
That major omission and disappointment aside, this is a useful book that crams much into its 168 pages. The book has three parts, introduction, chronicles and ‘appendices’ (by which I refer to the biographical notes and orders of battle... or lack of orders of battle). The introduction outlines the background to the campaign well, although there was a tendency to over-use direct quotes from secondary sources.
The chronicles themselves form the heart of the book. They include numerous insights, interesting observations, and remarkable or moving accounts that are conveyed to the reader through quotes taken from memoirs of participants. Here Mr Summerville’s prose is at its best, presenting a clear word picture of the campaign, the key movements and an assessment of the motivations of the key players. There is too little detail to form basis of wargames scenarios, but they present a fine summary of the events of the campaign.
The ‘appendices’ contain a selection of interesting and useful information. There are biographical notes about the key personalities of the campaign, principally generals, including 15 French and 11 Russian and Prussian, a glossary of terms, list of place names in German with Polish, Lithuanian or Russian equivalents, bibliography and index. As already mentioned, the lack of orders of battle are a disappointing omission.
The missing orders of battle are not the only disappointment that I had with this book. All of the maps are simple reproductions of maps from other works, such as Petre’s “Napoleon’s Campaign in Poland” and Wilson’s “Brief Remarks on the Character and Composition of the Russian Army...”, and are of varying quality, with many being unclear and of little help in identifying troop movements or dispositions. These disappointments are juxtaposed by the inclusion of the numerous ‘sidebars’ which add interesting ‘asides’ such as the history of the partitions of Poland, Benningsen’s battle reports, a brief biography of Marie Walewska, accounts of the sieges in Pomerania and Silesia, the terms of the capitulation of Danzig and debate over the direction of the wind at Eylau. 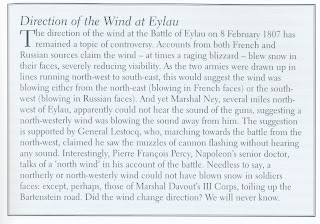 An example of one of the many ‘sidebars’ that are dotted throughout the book, adding interesting ‘asides’ to the main text.
“Napoleon's Polish Gamble” is introduced as the “first extensive study of the campaign to be published for a century”. While it is a fine summary and quick reference, it does not surpass Petre’s classic account, and in fact leans too heavily on excerpts, reproduced maps and even the same eyewitness quotes from that ground-breaking work. It does not have the beautiful production characteristics and conversational text of a ‘modern’ account such as Hourtoulle’s “From Eylau to Friedland”. All in all though this is a good read, especially in this bicentennial of 1812, since the actions, results and experiences of this campaign were so much a foretaste and cause of the 1812 Russian campaign.
Posted by James Fisher at 00:02