The five Ps: prior preparation prevents poor performance is commonly spoken about with regard to delivering a presentation or making a speech, but I reckon this can also be applied to painting figures. I am sure that every wargamer and modeller has his own approach to preparing and painting figures, gleaned from various sources, mixed with experience and turned into almost a ritual habit. In this post I’ll outline the steps that I take in preparing figures for painting.
1. Removal from the sprue
This part of my procedure has little changed in over 30 years. I take a sharp modelling knife and cut figures from the sprue; occasionally using the variation of twisting the figure off the sprue and then using the modelling knife to trim off any excess lumps left on the stands, arms or the like. Larger pieces of flashing are also removed with said knife (Photo 1 and 2). 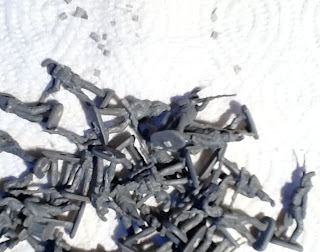 2. Removal of flashing
I used to attempt this using only the modelling knife, but recently found this marvellous suggestion of using a heated paperclip on the Hat website. It is a brilliant idea that works perfectly; don’t make the clip too hot though as that plastic has a low melting point!
3. Washing
This is the most important step and once again is one that I have not changed in over 30 years. Having removed any pieces of sprue and flashing, the figures are placed into a tub of warm, soapy water (dishwashing liquid) and then thoroughly cleaned, one at a time, using an old toothbrush (Photo 3). This is a fairly slow procedure, but must be done well to remove any grease or oil remaining from the mould and thus create a clean surface for painting. After washing, the figures are rinsed in a tub of warm, clean water and placed on paper towel to dry.
I use a tub for the washing after nearly losing figures down the drain in the past!
4. Mounting on painting stands
Once the figures are dry I mount them on stands for painting. Some are glued in position on what will be the unit’s movement base (only one figure per base though to enable all sides of the figure to be accessed easily and completely). Others are stuck onto ‘painting stands’ made of cardboard or ‘popsticks’, using blu-tack (Photo 4). The painting stand enables manipulation of the figure so that the wet paint is not handled. I have noticed that some people use pins to secure cavalrymen to a painting stand. This seems like a good idea, but I am happy to use a dob of blu-tack for each foot, even though this always necessitates re-painting of the figure’s boots once it is mounted on the horse.
5. Apply workable fixative
Serendipity is a wonderful thing. I bought a can of workable fixative by accident when I meant to buy spray varnish. Having bought the stuff, I read up on what it is for. I now spray the figures with it after washing and before undercoating (Photo 4). It seems to provide a better surface for painting and replaces the PVA ‘wash’ that some people use. I suggest strongly that this is an outside job!
7. Undercoating
Why didn’t we know about this as kids? It was not until my early 20s that a wargaming colleague told me about undercoating. What a difference it made. I originally undercoated my figures in white, but then, after further discussions and experimentation, change to black—even for predominantly white uniformed figures such as Austrians or Westphalians. About three years ago I was introduced to the joys of Payne’s Grey after a discussion about hobbies and painting with a work colleague. This is the “cat’s guts” (Photo 5). The website of a figure painter named Mike describes the use of Payne’s grey undercoat as his ‘secret ingredient’ and I reckon he is right. It is a perfect shade for undercoating, leaving dark patches in shading and along lines, but with a subtle brightness to them that is is just not possible with black. It can also be used for a final wash too.
8. Base colours
Like most people, I begin painting with the colour that is the main one for that figure, moving on to the next two or three main colours before painting flesh, then musket, lance or sword, followed by detail such as buttons, badges and metal bands on muskets (Photo 5). Lastly is the various bits of touching up that are always necessary to get the figure to the highest standard that I can achieve; not a great paint job, but serviceable.


After painting and basing are complete I varnish the figures with a spray matt varnish.
Since the late 80s, I have used only acrylic paints. The quality of these has improved progressively over that period of time. They are far easier to blend and mix than enamels and I do not miss the smell of turps and painful wash-up procedure one bit! Having been through a ‘metal phase’ in the late C20th, I wondered how the acrylics would go on plastic figures. Whether it is the above procedure, the quality of the paints or just because..., I find that the paint adheres to the figures without a problem and, once varnished, there is little loss of paint. In fact. I reckon that less paint comes off plastic figures than with metal figures due to being handled (and occasionally dropped) during a wargame.
So, that is my procedure, for what it is worth. I’m always keen to pick up new ideas, so please let me know what tricks you use when painting your figures.