An armchair tour of Salamanca

DVD Review: Salamanca Andrew Duff, Julia Page, Tom Dormer and Tim Saunders
This is a personal, armchair tour of the battlefield complete with detailed descriptions of the campaign, manoeuvring prior combat, stages of the battle and its outcome. Filmed on location, and in summer, it enables the viewer to see what happened at each point on the actual battlefield. The use of overlays of coloured blocks or unit names helps to make it clear precisely where on the landscape a particular action occurred. 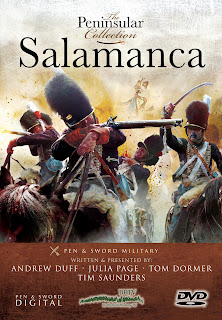 As with the Waterloo series by the same group, this DVD features simple video backing and film of re-enactors. While I appreciate the focus on content rather than CGI, I do not find video of half a dozen re-enactors a convincing representation of massed troops in a Napoleonic battle. That said, one appreciates the effort of these dedicated enthusiasts, especially when shown close-ups of the uniforms. The crack produced by a volley from just a few muskets is LOUD! One can only guess what it would have sounded like to have had thousands of them, plus tens of cannon firing over the course of several hours!
The presenters are all battlefield guides and extremely knowledgeable of their subject. You won’t get the ‘slick’ presentation style that one sees on the History Channel, nor the buxom, pleasing-to-the-eye tele-historian’s who grace the mass-market history programmes here; the focus is on content! The commentary is descriptive and objective, although I was surprised, and slightly frustrated, at the anglicised mis-pronunciation of Spanish, Portuguese and French names and places, particularly from people who specialise in guided tours of these battlefields.
All in all an interesting and useful DVD. We’ll be referring to it often as we plan our belated bicentennial game of Salamanca.
Posted by James Fisher at 21:17