A fine addition to any Napoleonic library

Book Review: Russian Eyewitness Accounts of the Campaign of 1812, by Alexander Mikaberidze
(Images courtesy of the publishers. Please do not reproduce without first seeking permission) 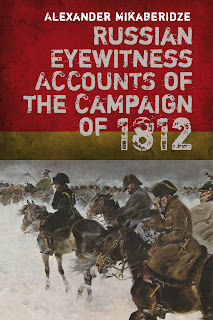 This is another fine offering from Alexander Mikaberidze; although in this case more as an editor, and of course researcher and translator, than as an author.
The first thing that I noticed about the book was that it is written in the “wrong” order, commencing as it does with the retreat and ending with the pursuit. This is, of course, not true and is a reflection of the fact that the mind of this reviewer—and I’d wager the minds of most readers of this review—are accustomed to considering the 1812 campaign from the French viewpoint. I am sure that the chapter headings were selected, at least in part, to emphasise this key point of difference between this book and others about the campaign; it is written entirely from the Russian perspective. The book truly provides “...an unique insight on the Russian side of the war...”.
In the manner of presenting the material from the eyewitnesses, Mikaberidze has used the same approach as Brett-James did in his 1966 landmark book “1812: Eyewitness Accounts of Napoleon's Defeat in Russia”—complete, often long, largely unedited quotes from selected eyewitnesses. This provides the reader with a far more detailed and deeper reading experience than the more common approach of shorter, edited quotes interspersed with text from the author. Importantly, the eyewitness accounts presented in the book provide a range of points of view from the Czar, his generals, officers and their staff, to ‘common’ soldiers and civilians.
There are numerous interesting insights and snippets from the beginning of the war to its victorious end for the Russian forces. These include impressions of the coming war—from excitement to apprehension, a patriotic song sung by the Russian troops—in French!, detailed recollections by Ivan Zhirkevich of 2nd Light Company of Life Guard Artillery Brigade of Kutusov and his staff during the pursuit and, of course, the Battle of Borodino.
Thirty-eight pages are dedicated to accounts from the battle. Tragic, almost poetic descriptions, such as from Ilya Radozhistskii, a lieutenant in the 3rd Light Company of the 11th Artillery Brigade of 6th Corps, describing the night of 6th September “the fires turned the dark clouds in the sky into a crimson twilight and the flames in the sky foretold a bloodshed on the ground” (p. 164). Mikhail Voronstov, commander of the 2nd Combined Grenadier Division, “out of about four thousand men, there were fewer than three hundred at the evening roster call and out of eighteen staff officers only three survived, and, as I recall, only one of them was not wounded” (p. 172). Sergei Mayevskii, Bagration’s adjutant, describes being ordered to see how General Rayevskii was faring at the reboubt during the height of the morning battle. “One hundred cannon bombarded it. Rayevskii, with an elated face, told me, ‘Now go back and tell the Prince what is going on here!’ As I galloped the distance of over two verstas [1.3 miles], I suffered a hit from a flying projectile and the impact was so severe that I could not regain the hearing in my ears or close my mouth for over two hours!” (p. 176). As with elsewhere in the book, Mikaberidze’s approach of reproducing long extracts provides a fuller, more descriptive and richer account.
Each quote is prefaced by a short introductory paragraph from the editor, which the provides the background to the quote and, the first time that a person is quoted, introduces who he was and his position. It is always interesting with primary sources to know how long after events took place they are writing. I would have liked to have seen an appendix with an alphabetical list of the eyewitnesses used, a brief biography of each and from where the material is derived (perhaps even with an assessment by Mikaberidze of the reliability or otherwise).
There is only one map, an overview of the 1812 campaign. While I would always like to see more maps rather than fewer, this one is clearly drawn and seems to present all of the locations that are mentioned in the text, which is always pleasing.
The book is beautifully presented; an aspect that seems to be in common with most publications nowadays. I have the hardback edition of the book, which always adds to the feeling of quality! The print is clear, of a good size and printed on thick paper stock. There are 24 pages of plates, a little over half of them in black and white and the remainder in colour. The black and white plates include reproductions of paintings of the Czar and his generals plus ten reproductions of famous paintings of battle scenes and other events of the campaign from artists such as Albrecht Adam and Faber de Faur and Jan Chelmińiski. The colour plates are reproductions of paintings of events and scenes, plus one of Kutusov and another of Napoleon reviewing the Guard. All of the plates are reproduced clearly and allow the reader to see the detail. While many of these prints are now available on-line (from Wikimedia Commons) it is more convenient to have them in printed form and they add greatly to the overall ‘experience’ of the book.
This book will make a fine addition to any Napoleonic library.
Posted by James Fisher at 07:13