Our e-friend and guest blogger Phil from York, UK has sent another report of one of his marvellous bicentennial games. This time the subject of his attention was The Battle of Brienne, 29th January 1814.

Over to you Phil.

Almost a year late with this one but I was determined to get at least one 1814 battle in—La Rothiere will have to wait for another time!

I used a ready made scenario from the Volley and Bayonet website informed by background reading; chiefly Uffindell and Petre with reference to the Histoire & Collections book.

Turn 1, 3 pm
Blücher is ensconced in the Chateau of La Brienne and Udom’s Corps are in positions in and around the village. Grouchy has turned up with the Guard Cavalry and Milhaud’s Dragoons. 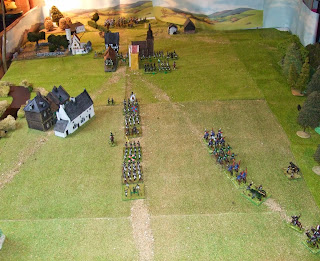 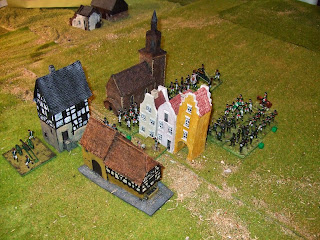 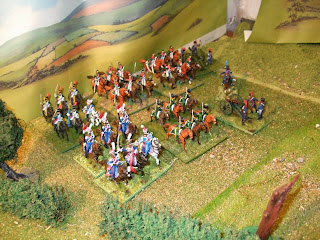 At the start of the turn he is joined by the Emperor himself with Duhesme’s Div. of II Corps. 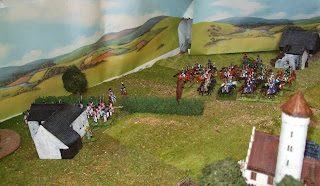 The Russians immediately rush Scherbatov’s VI Corps up to support (meaning the bottom half of the table will get no use in this game and I’m going to fighting at the least accessible end – drat! – should have thought of that!). The Russian artillery opens up an immediate bombardment on the approaching columns. 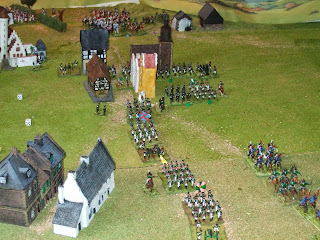 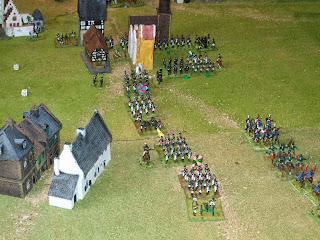 Turn 2, 4 pm
The French continue to arrive and move into position while the Russian fire their artillery and hurry their reinforcements into action. 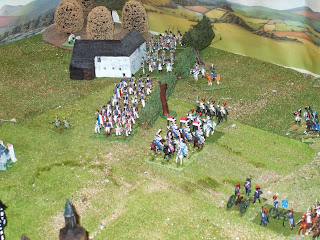 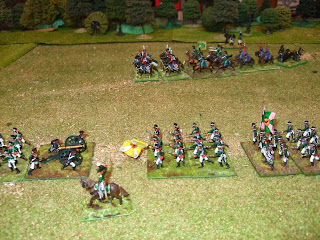 Turn 3, 5 pm
“The Hammer”
Ney arrives with the Young Guard on Maizers Road to attempt to flank the Russian position. French Skirmishers force Blucher to flee the Chateau and destroy one of the Russian forward batteries. 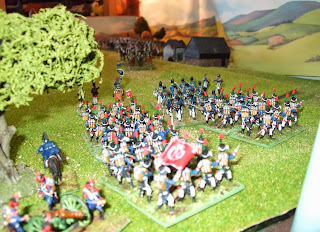 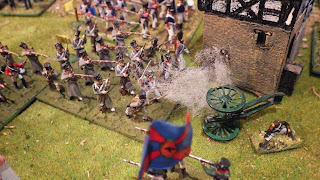 A cavalry mêlée ensues and one of Milhaud’s veteran Dragoon Regiments is beaten off. 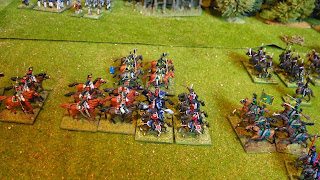 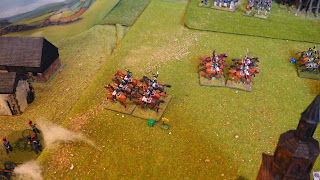 Turn 4, 6 pm
The French attack on Brienne itself is beaten off with heavy losses but Grouchy’s charge in the centre pushes back the Russian cavalry allowing the Young Guard to deploy and advance of the flank of Brienne. 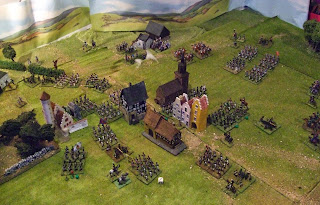 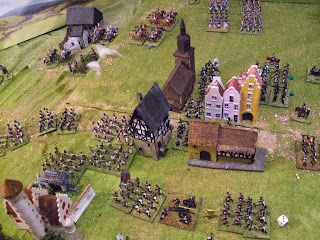 Kristischiknikov’s Brigade (VI Corps) attacks the flank of Brigade Voirol but is beaten off and suffers a permanent disorder.

Meanwhile the Russian cavalry counter attack and destroy Piré’s division but their dragoons and associated Cossacks are pushed back – honours are even!

Turn 5, 7 pm
Sometimes it works! (According to my reading more batteries were destroyed by assault than by counter-battery fire) the Paris Reserves overrun a Russian Battery – another one bites the dust!

The Young Guard advances exposing its flank to the Russian cavalry but they are rallying from their exertions in the previous turn so miss their opportunity. However the French attack on Brienne is thrown back again. 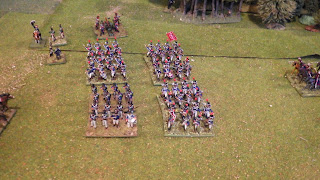 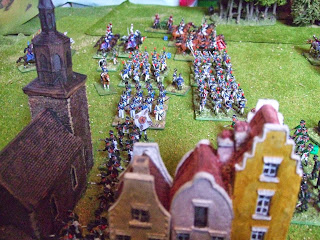 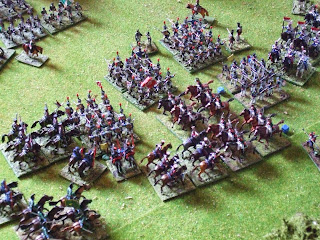 Turn 6, 8 pm
The Doughty Russian defenders of Brienne throw back the Guard’s assault on their flank but finally succumb to a frontal assault by Gerard’s Paris Reserves who enter the village at last. 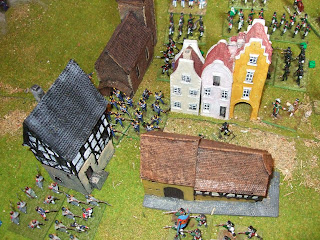 In order to consolidate their position the Russians withdraw from Bienne and reorganise behind the village. This also allows them to follow up on their success against the Young Guard and press their advantage. 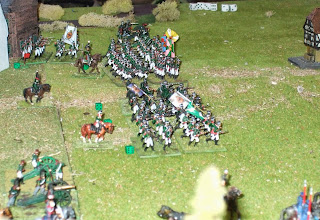 Turn 7, 9 pm
In the darkness the French finally take possession of Brienne and the Russian continue their retreat. Marauding Cossacks surround and destroy the remnants of Baste’s Voltiguer Brigade (first time they have destroyed a unit in any game as far as I can recall!). 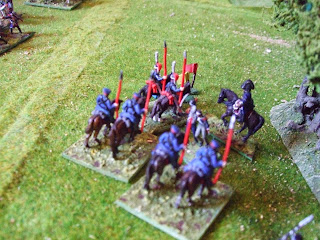 “The Hammer misses the anvil” 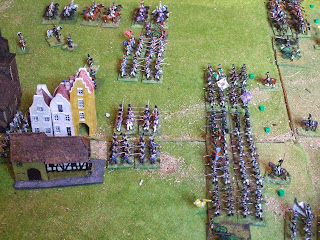 Turn 9, 11 pm
It is now the dead of night and things look pretty grim for the French – their quarry has escaped the trap but the Emperor orders a final attack and on his left the Young Guard destroys a Russian Brigade and another succumbs to artillery fire.(The units have got a bit mixed up by this stage and I no longer put stickers underneath the bases to identify the units so they will have to remain anonymous…). 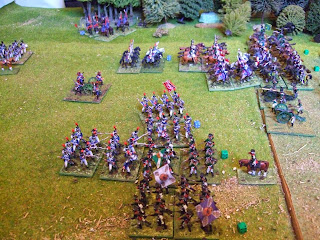 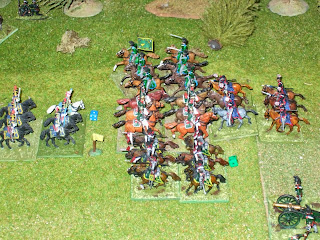 In return the Russian Artillery destroys another YG unit and the Russian cavalry on the right overwhelm the last Dragoon division allowing the rest of the army to withdraw unmolested. 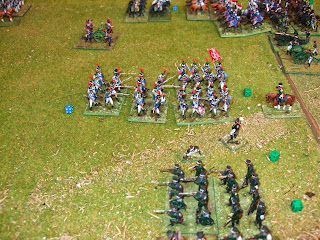 The battle peters out and although Napoleon is in control of La Brienne (and Blucher’s supper) he is in no state to pursue. In fact all of his divisions are disordered and must be considered exhausted. His trap has failed so this is an allied victory. 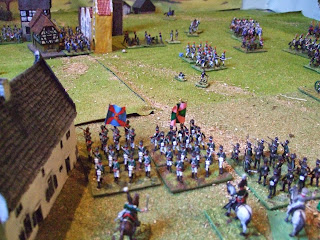