Having completed our bicentennial game of Quatre Bras, our attention is now fixed on plans for Waterloo 200. The orders of battle were compiled some time ago and painting of specific units for the game has been stepped up over the past few months, so we now turn to preparing the tabletop. This began last weekend.

We initially thought that we would use a ground scale of 1 mm to 1.5 m with an L-shaped table. We got so far as to create a map and laying out the main features on the table, but fortunately Mark, worried at the area that we had available for deployment, suggested that we try out a few troops on the table. Sure enough it was not going to work, so it was back to the drawing board!

Rough plan of the battlefield at 1 mm :1.5 m. At first looked okay, but we had insufficient area for our figures. 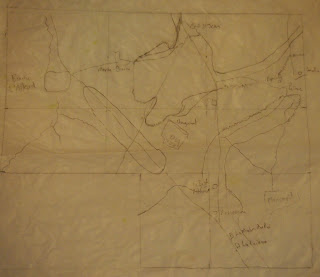 A ground scale of 1:1 was going to be needed, but could we do that and fit all of the necessary sections of the battlefield, the two ridges and Plancenoit, onto the table? We made a template of our available table at 1:1 and moved it around the map. It did not seem to work—damn!

Hang-on, the section of our table making the arm of the ‘L’ is moveable, so what if we changed from an L-shaped table to a T-shaped one (either regular or irregular)?

We moved the template of the table around the map, now in two sections of a rough ’T’ and it worked. In fact, a regular ’T’ was the best configuration so as to be able to fit the maximum amount of French and Anglo-Allied troops while leaving a suitable area for Plancenoit and to the east of that town.

Revise map at a ground scale of 1 mm :1 m. A millimetre on the map represents 30 mm on our table. 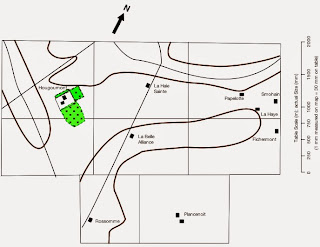 This weekend we’ll make the additional hill sections that we need for the ridges and start to layout those and other terrain features.
Posted by James Fisher at 03:10