We spent a most enjoyable and rewarding day yesterday laying out the terrain and placing some of the figures for our Waterloo 200 re-fight, which will commence just two weeks from now.

Fittingly (as far as we are concerned) we'll be fielding loads of Airfix figures (particularly French and British infantry and Prussian landwehr) and our representation of the towns and farms feature various sections of that manufacturer's "Waterloo Farmhouse".

Here's a pictorial summary of the set-up to at this stage.

The table, looking from our usual vantage point, roughly from the WSW. The line of buildings in the 'centre' of the table represent Hougoumont, La Haie Sainte and Papelotte/La Haie/Smohain. French at right of photo, Anglo-Allied at left.

I did not take my figures down, so only about a third of the French army is set-up so far. Here's the same photo as above indicating the main French formations yet to be placed on the table.

The photos below are a 'walk' around the table progressing in an anti-clockwise direction from the WSW position shown above; i.e. 'west to east' and back again. 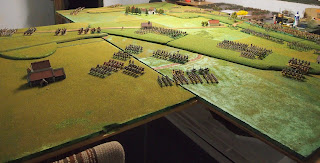 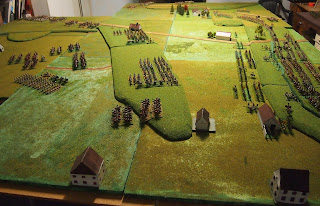 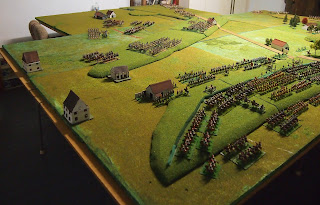 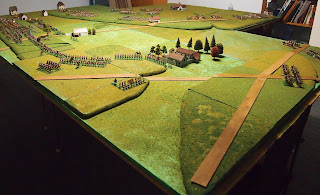 We're really pleased with how the T-shaped table has fitted the layout of the battle. All of the French formations will commence on the table, with the exception of Guyot's guard heavy cav. The Anglo-Allied frontline is on-table, but most of the cavalry, the Brunswickers, Adam's, Halkett's and Lambert's divisions begin the game off-table.

Here are the majority of the Anglo-Allied troops that do not begin on-table—with the notable exception of much of the cavalry, which we'll bring on the 26th. 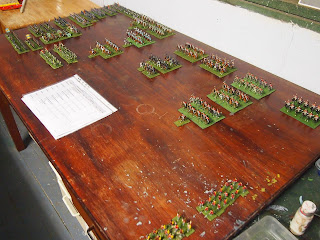 And here are (most of) the Prussians! 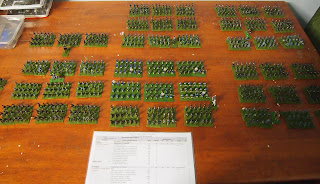 We are 12 units of landwehr short, but they'll be made up by a combination of any additional units that Mark 'knocks out' 'tween now and the 26th and 'recycling' of broken units during the game (we also have stand-in Russian militia, if necessary). The cavalry from IV Corps will 'arrive' on the 26th.


After a good day, the three commanders admire the handiwork so far! 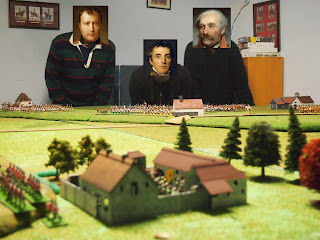 We are nearly there. We'll most likely set up the remaining troops on the 26th June, ahead of our first day of the game on the 27th. We plan to run it over two of our gaming sessions (at least).

Meanwhile, Mark and I are privileged to be part of one of the Napoleonic Wargaming Society's (NWS) special bicentennial games. They are staging the entire battle in 15 mm, using Napoleon's Battles and the attack of d'Erlon's corps in 28 mm using General de Brigade. 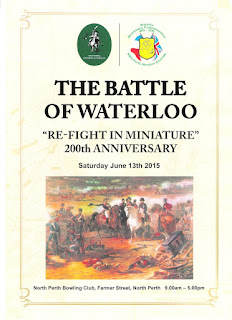 Click on this link to listen to the NWS President, Carlo Pagano, interviewed on local radio in Perth about this event. Ever the "media tart", our Carlo!
Posted by James Fisher at 12:48