The last weekend in September was a significant one for the Eagles.

First and foremost was the victory to the mighty West Coast Eagles in the AFL Grand Final on Saturday 29th September! 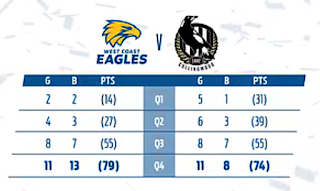 One just does not tire of watching this...

Julian has already reported another victory to eagles (of sorts); the mercenaries, lead by "former Roman veterans", at the Battle of Utica.

Later that same day, across the Avon River, John (of Serpentine War Game Club and honorary member of our ANF group) and I held the Action at Abbach (Battle of Eckmühl) 22nd April 1809: pitting the French vs Austrian eagles.


John brought the scenario and the majority of the figures while I provided the venue, the Ralph Fisher Memorial room (aka ANF annex B), food and essential beverages!

The scenario came from Michael Hopper's^ scenario books of the 1809 campaign (see end of this post). We used the game as a playtest (for me) of the General d'Armée rules.
(^In an interesting aside, we had some extensive correspondence with Michael a couple of years ago, firstly with Julian and David (of the Wargames Retreat) about War of Spanish Succession but moving to Napoleonics. He had mentioned producing scenario books, so when John said that he had some excellent scenario books for 1809 and told me more about them I said, "Hang on, there are not by Michael Hopper are they?" G'day to Mike if you are reading this!)

You know those times when you do a move and realise immediately that it was a bad one—then it gets worse? That was me when I decided to move the squares of Boudet's left-most brigade forward to make room so that the lines behind could manoeuvre. A silly move with cavalry within 9" as it required a discipline test. "No worries," I said when John told me, in answer to my question as to whether it was a valid move. Trouble is, I did not roll well, there were negative modifiers for the losses inflicted by Klenau's battery so one battalion retreated and the other was unformed. I could not even blame those grand final beverages...

Time was getting on, but we considered that the outcome could be clear with one more turn. 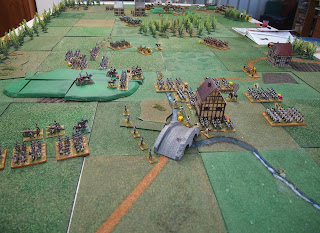 The game was a draw by the scenario conditions as each side controlled an objective town and no brigades/divisions had been broken. I claimed it as a French victory, though, as they were in the best table-top position and were being reinforced. Strategically, Oudinot's aim was to protect the right flank of the army and this had clearly been achieved.

We had completed nine turns of what was a close and extremely enjoyable game. It had also been successful as a first play-test of the rules. Having watched the videos describing them, which seemed to indicate some bizarre mechanics and approaches that do not appeal to moi, I had been extremely hesitant, bordering on skeptical about them.

After we stopped on Saturday night I had progressed to thinking that they were a set that I'd be happy to play when doing a game with John. By half-way through our Sunday session, I had changed to considering them well worth another game, preferably with larger forces and to read them (always a good idea).

My concerns over the combat system quickly evaporated and I ended up finding it to be really darned good. The two-step process is easy to work through and, often, the result is determined by the 'charge' bit (morale effects) without the need for actual 'pointed sticks'—which sounds a bit like the descriptions from battles, hey? Cavalry seem to 'work' particularly well, most often in a fairly evenly matched contest they did a bit of damage, or not, and went back to "lick their wounds" and prepare for another go. On occasion they did much more. Most telling in this game was the devastating charge of the mighty 7e hussars (are they on everyone's list of favourites?), which severely disrupted the Austrian right. This was no mean feat, resulting as it did from some beautiful dice rolls by me—following on the heels of a series of most ordinary rolls on my right.

The tables in the rules at first glance, by which I mean simply looking over John's shoulder, seemed pretty daunting. Use during the game showed that looks can deceive. By turn seven, or so, I was able to 'predict' the result, from memory, particularly with firing. To me this was a good indication of ease of use.

There remain a few doubts in my mind regarding the ADC system, but I became more comfortable with it over the course of this game. The description of 'the player's command focus' does not gel with me. To me it encompasses a whole heaps of aspects. Chiefly, good command, overseeing the deployment of the troops, co-ordinating movements—or perhaps the opposite, being paralysed and failing as leaders. Then there is the bit where aides officers, commanders wave their sword, exalting the men to greater efforts. The 'special' command actions such as a 'glory' charge are not ovewhelming, a commander adds a bit to a unit in combat but is not more valuable than the troops. No plus 7s here! Finally it is about time. Good command keeps things moving, hesitant command means that formations may 'muck about' a bit, attacks falter or occur in an unco-ordinated manner. It is possible, with more use, that this system will show itself as a mechanic that is too stylised for my liking. Alternatively, further playtesting may lead me to appreciate it more and more.

A big thank you to John for setting up the scenario, bringing his lovely figures for the game and, most particularly, for backing his judgement and certainty that I would 'like' the rules.

I look forward to testing them with a larger battle. They work as general de division (single corps actions), but will they work for general d'armée (multi-corps actions), or will the added detail make them 'tough' for those bigger games? 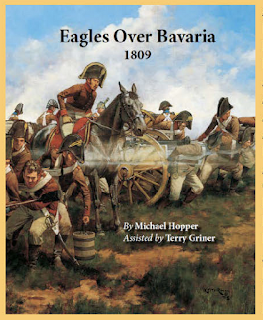