A squadron-sized battle in which the Royal Navy succeeded in losing a ship-of-the-line seemed an admirable case study for a further test of the Grand Fleet Action in the Age of Sail (GFAAOS) rules. I was very happy to take command as Rear-Admiral Saumarez, HMS Caesar heading the leeward squadron sailing SSW, the French moored to windward, gunboats approaching from the North along the Spanish coast, with a battle plan no more complicated than parading up and down in front of the French, but without crossing over the line in the sea (identified below in the top left of the photo) where began the shallows. 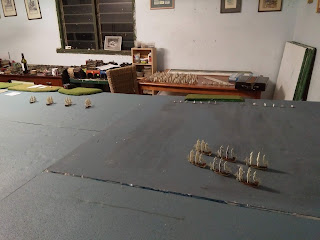 By the end of Move 3 my prayers had indeed been answered, with the French taking up the challenge... 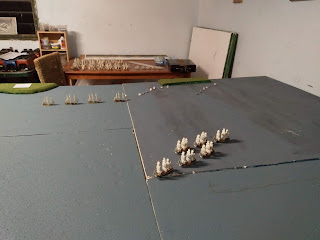 ,,and then Desaix striking a rock and holding fast, no doubt much to Contre-Amiral Linois' displeasure, but then that's what you get for aggressive sailing in shallows. 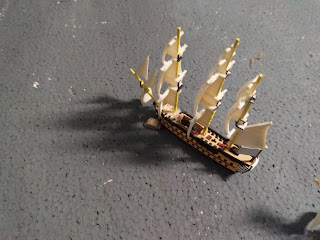 The two fleets closed fast. No British Admiral could have wished for an encounter on more favourable terms. 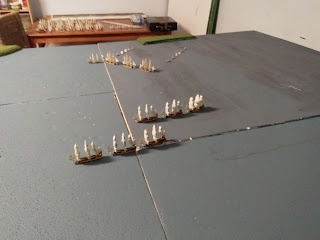 Even worse for my opponent, the French line rapidly then got out of position as a result 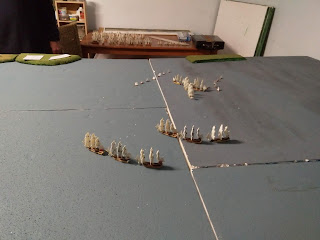 Although they must have been extremely grateful for the assistance of their Spanish allies to tow them slowly out of their predicament. 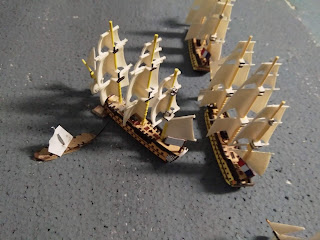 In characteristic naval wargame fashion, nothing seemed to have happened, but in fact everything that was to happen had already been largely determined by the sailing patterns of the ships. The following move, fire was finally exchanged, the French moving and firing first. Heavy casualties on the second ship in the British line, I rued my double line. 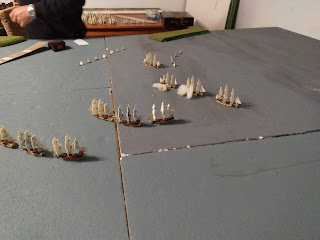 But the return fire on La Muiron, the 44 gun frigate at the end of the French line which had the misfortune to find itself at the receiving end of a broadside from two British ships-of-the-line, was simply devastating. 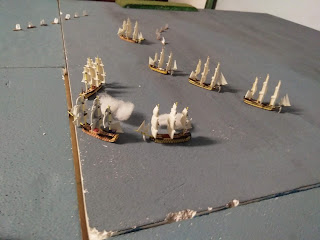 Not only did I inflict the maximum possible damage, but the unlucky ship also rolled practically the worst devastating hit consequences - and began to founder. The moral of the story might well be, no frigates in the line. Or perhaps not to roll badly when it matters. 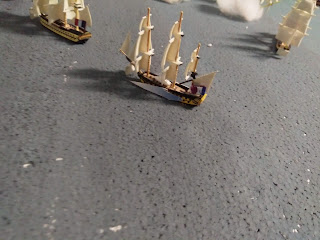 From this point onwards, however, the tide of war, both literal and figurative, began to turn inexorably against the British squadrons. Certainly, the French line was in total confusion, and one of my squadrons was able to round the back of it. On the other hand, my own squadron was now a considerable distance away from the action and a certain risk was evidently developing of being defeated in detail, especially given the damage my second squadron had already taken. 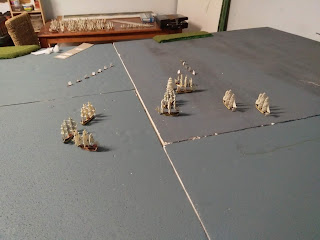 This was a feeling reinforced by a stern rake from the French ships-of-the-line as we struggled to turn to the North. 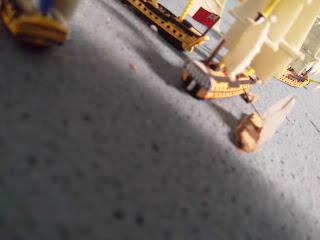 Levels of damage on my vessels were reaching unacceptable levels, and I hoisted the signal for general retreat. Not a moment too soon, as suddenly the sea was full of Spanish gunboats. 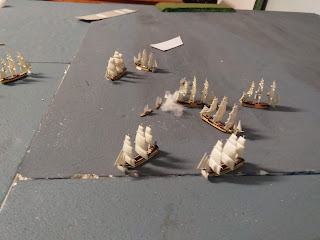 although gunboats are no match for a broadside from ships-of-the-line, and one was sunk. 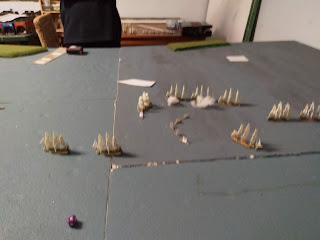 just as the Desaix grounded again, to be pulled off again by its Spanish gunboat allies. I foresee no bright future for Captain Christy de la Pallière, as this would be the second time he would have commanded a ship that ran aground. 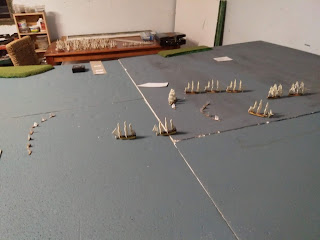 whilst clearly visible are the Britsh squadrons making off to the North, counting their dead and considering themselves very fortunate not to have had evident laggards or even vessels stopped in the water.

In complete contrast to the historical action, this time the French had lost a vessel, the British none, but casualties on the British side were more severe, with at least two ships-of-the-line out of action for weeks, possibly months, and hundreds of dead and wounded. There would be no second Algeciras after this action. Rear-Admiral Saumarez could hardly be cashiered after sinking a frigate, but I expect his next command will be Naval Paymaster-General at Portsmouth, never rising to much more than Rear-Admiral of the Red, and certainly never Flag officer of the Victory. Naval buffs will already have raced ahead - with no Second Algeciras, those two Spanish First Rates will not be lost in the confusion, and will most probably end up at Trafalgar. How much difference they would have made, we can wonder, but certainly some. It is a hypothetical perhaps worth investigating.

I cannot forbear adding, the rules came through with flying colours. We are now set to use them for a full fleet action.