With supreme confidence in their fighting force - the Rebel attack at Fair Oaks, 31st May 1862

For our third Civil War game, I had the pleasure of selecting the first day of fighting (31st May) at the battle of Fair Oaks (known to the rebels as Seven Pines). A larger battle, this time, with two Union Corps and two rebel divisions involved, and the welcome opportunity for me to build a railroad as well as the Kuhn twin houses.We used the forces lists from the Osprey publication on the Virginia campaign at a scale of 1 stand = 200. https://ospreypublishing.com/seven-days-battles-1862-pb 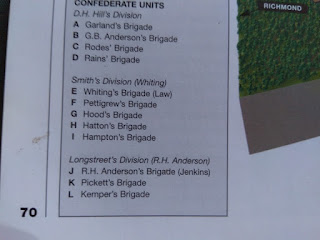 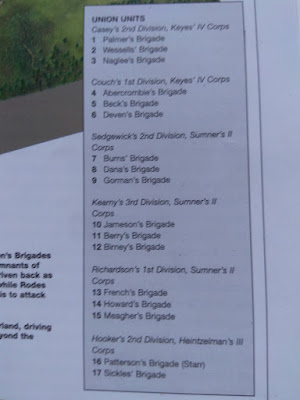 Especial gratitude, however, to Brett Schulte for his painstaking recreation of the Fair Oaks OOBs in Excel: without those we would not have know the exact strength of each brigade.Not all of the Union forces would be engaged on our northern flank of the action, in fact - but Sedgwick's 2nd division was scheduled to reinforce from the North, and Kearny's 3rd division from the south.


My task as Brig.Gen Keyes in particular was in my view to outperform my historical counterpart to check the rebel advance and hold IV Corps position in time for reinforcements from Maj.Gen Sumner's II Corps to reinforce my position around Fair Oaks railroad station and prevent Gen. Johnston from achieving his objective, delegated to Gen. A.P. Hill on the rebel right and Gens.Longstreet and Smith on the right - to encircle and destroy my entire Corps.

We started from the historical deployments, which left Brig.Gen Casey's two green Union brigades, those of Wessel and Naglee, absolutely exposed to the lines of rebel assault as their pickets ran back to them. 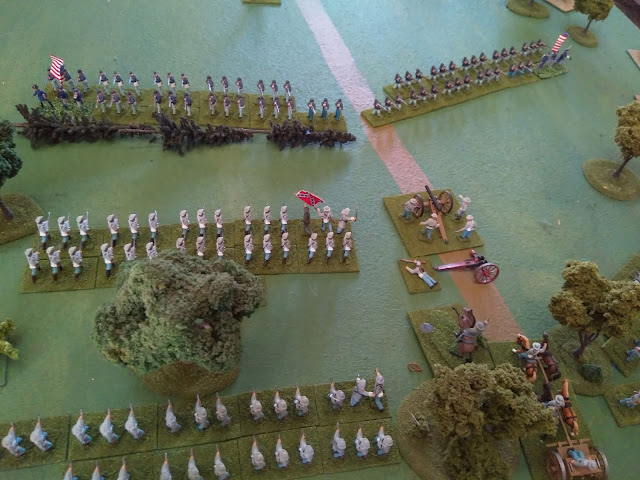 I was surprised to see so much rebel artillery, and worried that my orders to Brig.Gen Casey, for a withdrawal to the second line, was likely to expose both brigades to fire in the open. Luckily I silenced one rebel battery, which withdrew to regroup, but there were more where that came from. 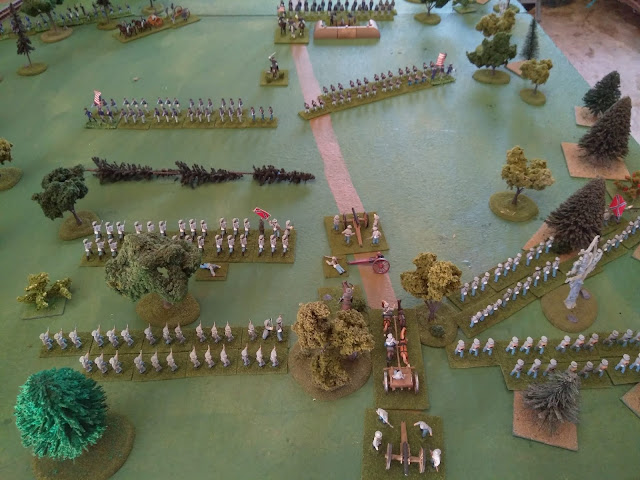 The rebels came on 'With supreme confidence in their fighting force' (Harmon, 1941:87), and stormed Casey's redoubt, as historically Wessel's brigade took the heaviest casualties of the action on the Union side, abandoning the redoubt, and worse still, mishandling of the 7th and 8th New York artillery batteries by Colonel Bailey, just as historically - sitting in their redoubts but failing to score casualties - saw both of them overwhelmed and captured by Rodes' brigade. We could well imagine the scene at Casey's redoubt, here depicted in the Osprey book. At that point I must admit I thought the rebel advance had become unstoppable.

But I had underestimated the cool determination of Brig.Gen Palmer, who flung his brigade forward without hesitation and retook the redoubt. 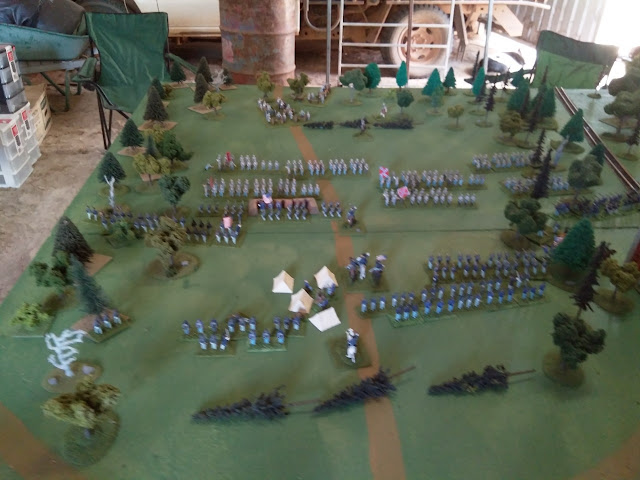 Eventually it became possible to infiltrate Brig.Gen. Berry's brigade through the woods to the rebel right, which left Rain's brigade outflanked after it had passed through rebel lines to take over the assault on Casey's redoubt. 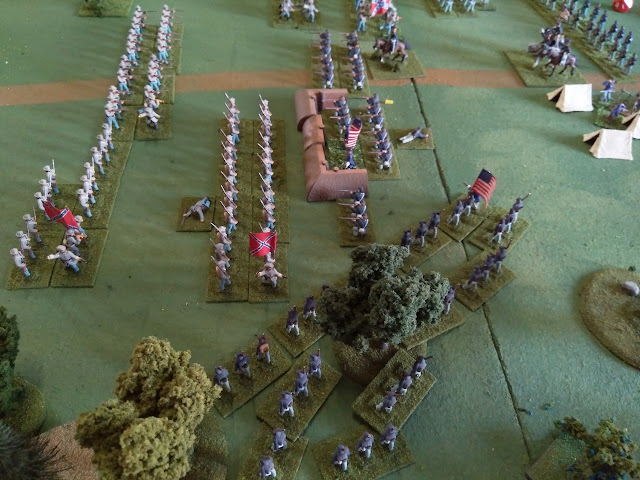 Meanwhile in the centre Gen. R.H. Anderson's brigade had met its match in Brig. Gen Abercrombie's New York men, who held them off long enough for their assault to peter out, even if my original intention of outflanking them had proved a pipe dream. Eventually the lines became more or less parallel to one another, quite different from the historical action. 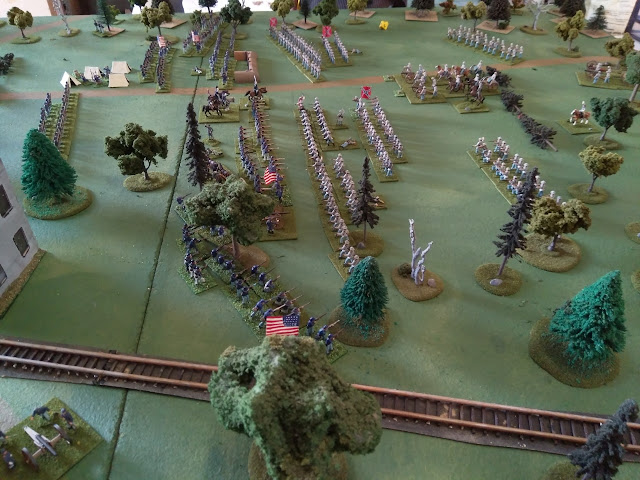 Here a view of the fighting in the centre and across to the twin Kuhn houses and the railroad beyond. 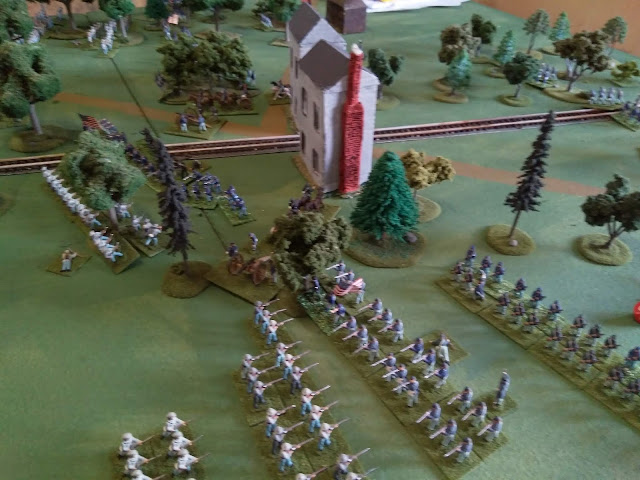 As always in actions of this complex kind, the schedule of reinforcements was crucial to the action. It turned out that both Gen. Smith's rebel division and the Union 3rd division arrived at more or less the same time - but significantly later than historically. The Union artillery managed to get off a few desultory shots, but the upshot was that there was no fighting at all around Fair Oaks station itself or on the right flank, as the picture below of the end of the action shows. Brig-Gen Gorman was especially slow in advancing. 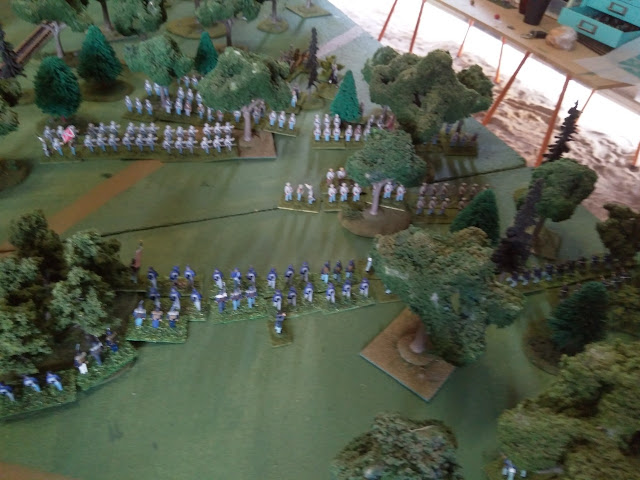 And here, the arrival of reinforcements from II Corps around Casey's redoubt, which remained in Union hands at the end of the battle. 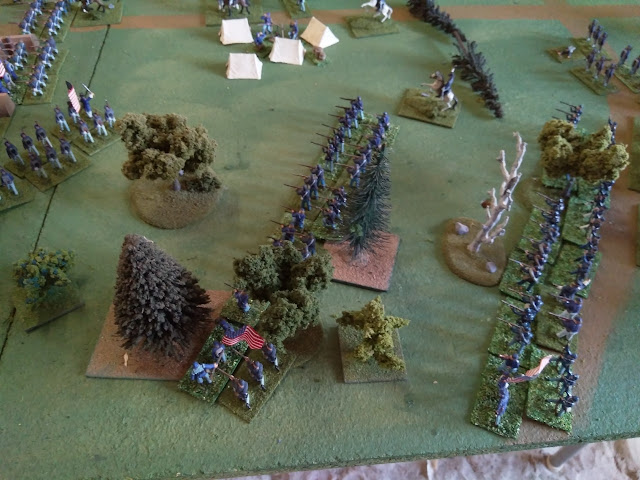 Casualties were fewer than those of the historical battle, the Union lost around 1,200 compared to 2,600 Confederate, although 1,200 'skedaddled' compared to 400. Historically, Casey's division lost 177 dead and 934 wounded. Our casualties were even heavier on Casey but much lighter elsewhere, mainly on account of the severe delays on the part of Sumner and Smith. Two Union brigades therefore ended the battle worn, one Confederate brigade was worn, and two spent. Almost all the losses were around Casey's redoubt. If it had not been for those two lost batteries, the brigade loss tally would have been even more even. As it was, we called it a draw: 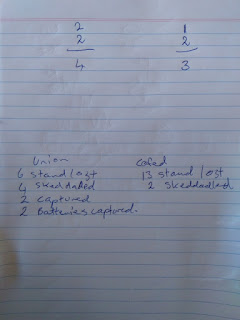 And as Brig.Gen Keyes, I felt that my cautious strategy of withdrawal followed by a dogged defence had been justified. One of the most remarkable aspects of Fire and Fury, I repeatedly find, is the admiration one feels as the divisional or Corps commander for gallant brigades and their commands. Especial praise on the Union side should therefore go to Palmer's brigade for their recapture and stout defence of Casey's redoubt. As Keyes I don't mind admitting that I thought they would be swept away. On the rebel side, Gen. Johnston singled out Rodes' brigade as being heavily engaged and almost carrying the day. Mark rightly pointed out that the disparity Fire and Fury insists upon in melee capacity and inferior artillery is a real incentive for the rebels to engage in hand-to-hand combat. I keep telling myself that the poor dice rolls of the New York batteries could not have been predicted, but at least I could hold my head up high in reporting to the Army commander - and I might well earn promotion to Maj.Gen and Brig-Gen. Sumner not, judging by his tardy arrival on the battlefield.

The biggest change to history though, which this refight shares no doubt with many others, was the fact that Gen. Johnston came through the battle unscathed. The whole course of the Civil War henceforth would no doubt be very different without the expertise in the craft of war exhibited by his successor.